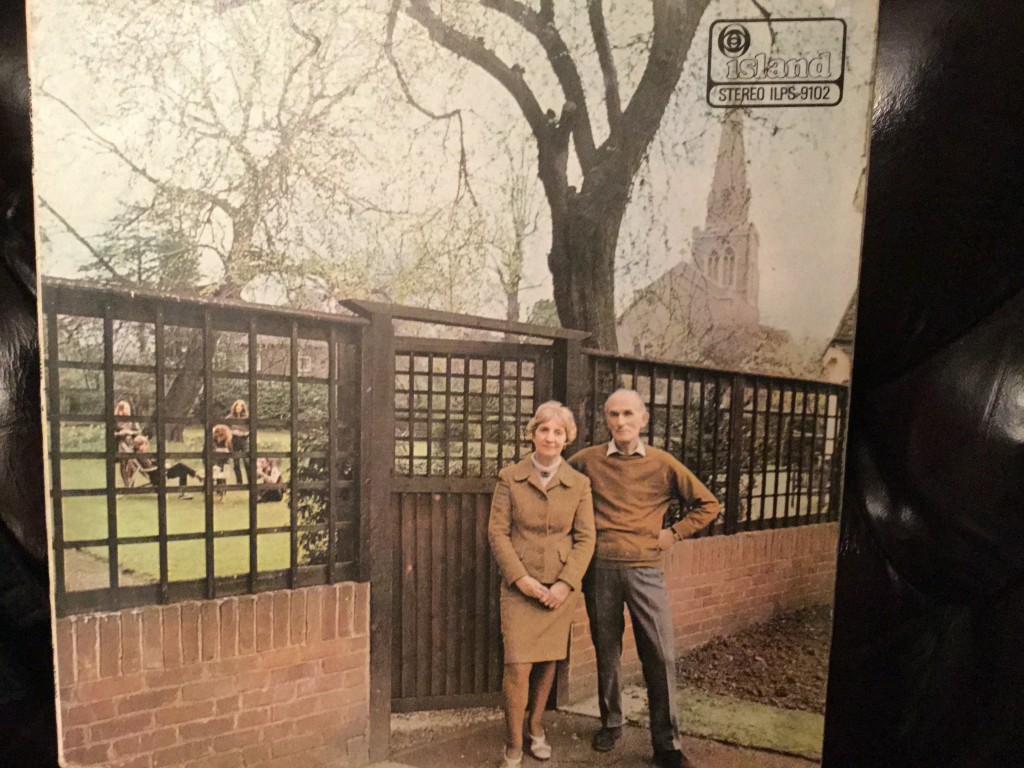 As usual, I came to this party late.  While the States was enjoying a folk revival in the mid-sixties that led to a range of new sounds from artists like Bob Dylan, the UK folk scene developed a little differently. Joe Boyd, who is credited with helping Dylan “plug in” at Newport, was working the London club scene with bands like Pink Floyd and managed to sign this new folk group—Fairport Convention– to capture some of that American folk sound: what resulted was eventually quite different, and led to a series of albums that saw the band develop a far more distinctive sound based on traditional English folk music.

The band signed to Island early on (their first, self-titled album was on Polydor). What followed was a series of albums that defined a special place in the coalescence of “nativist” (in the sense of perpetuating a tradition) music, which evolved from an American “sound” to one that was not only distinctly English, but altogether unique in style: a young, but highly-skilled Richard Thompson wrote and brought a sophistication to his guitar playing that belied his years; coupled with the heavenly voice of Sandy Denny and a group of talented band members, three essential albums resulted: What We Did on Our Holidays, Unhalfbricking and what is considered to be their peak work, Liege and Lief. 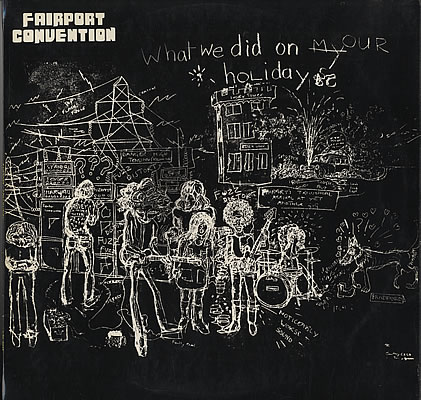 In the midst of these records, a road accident killed the drummer and Thompson’s girlfriend, injuring several other members of the band. Although Unhalfbricking may have been a popular album in the UK at the time, Liege and Lief, the album that followed (the road accident) is, in retrospect, considered the more influential, because it reflects the group’s almost complete transition away from an “American” folk orientation. Denny is often credited with this shift in focus. She left Fairport shortly after Liege and Lief to embark on a variety of experiments, including solo work, before returning to the band in 1974. Sadly, she passed away in 1977 at the age of 31.[1]

Thompson went on to a long career as solo artist after departing from Fairport in 1970 and the band went through various personnel changes thereafter.

At least that’s the textbook version of the story.

I wasn’t much of a “folkie” growing up in the States in the sixties (I was only ten years old in 1965), though as time went on, I certainly became familiar with some of the traditions- the work songs, the protest songs, and the lilting, story-telling ballads. When I finally got around to hearing some of the Fairport records from the Denny-Thompson era, I was struck by something that transcended all of the elements with which I was already familiar; there was something haunting about Sandy Denny’s voice, and the band wasn’t just strumming through another tired old ballad. The key to this record, and the band’s sound was something that gave the whole band an otherworldly quality: Denny’s voice was often characterized as “ethereal,” but it is more than just that voice; and it wasn’t just well-played folk-rock, either. Instead, I think it was raw talent, leavened, tempered and forged into something different- my guess is that the band members were changed by everything they went through in very short time.

I asked Joe Boyd,[2] who produced the group, to describe what it was like in to work with the band during this, their creatively richest period and what he thought led to the evolution in their sound:

Fairport Convention – like many groups in that era – developed rapidly over the course of their first three albums. The dialectic of Richard Thompson and Sandy Denny was driving them towards becoming a very original and successful band when tragedy struck. Their first impulse was to disband, but decided to carry on while vowing never to play the repertoire they had developed with drummer Martin Lamble, who died in the crash. Music From Big Pink was a huge influence during that traumatic spring of 1969. It both barred the way to any further exploration of American roots music – how could a bunch of English kids possibly compete with that? – and inspired them to look for their own roots in the traditions of the British Isles. This new repertoire was driven by a combination of Sandy’s experience in folk clubs, Ashley Hutchings intense research, the addition of ace trad fiddler Dave Swarbrick, Thompson’s blues-avoiding rock guitar virtuosity and the discovery of strict-tempo dance-band drummer Dave Mattacks who steered them clear of rock clichés.

When you take in this body of work now, it is all the more remarkable that the three albums- What We Did on our Holidays, Unhalfbricking and Liege and Lief were released within a single year, from January through December, 1969, with the deaths, injuries and marked evolution of their style all occurring within this remarkably brief period.

Among my copies are early UK Island pink labels and pink rims; as seem to be typical of my experience with Island’s output during this period, the pink labels are warmer and sound less “reproduced” but the pink rims are quieter.

If you aren’t familiar with Fairport Convention, at least buy Liege and Lief on an old Island UK pressing. These records aren’t terribly expensive. I think you’ll find, as I have, that this leads you to tap into more undiscovered, rich veins from this era of music-making in England. That so much of this material was first recorded on Island tells you just how influential that label was and remains. 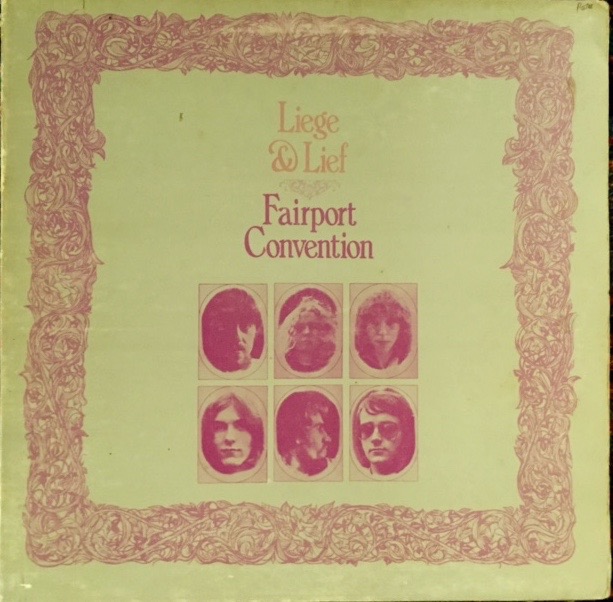 [1] Before her untimely death, Denny managed to squeeze in a duet on Led Zeppelin’s ‘Zoso” album (a/k/a LZ IV) as well write “Who Knows Where the Time Goes” (1967), later covered by Judy Collins with great success.

[2] Boyd’s rather remarkable life included organizing European tours of blues and soul artists such as Muddy Waters, Sister Rosetta Tharpe, handling the “sound” at the 1965 Newport Festival (where Dylan ‘went’ electric) and operating the UFO Club, where Pink Floyd developed their sound. His book, White Bicycles: Making Music in the 1960’s recounts much of this in detail and is a fascinating read: http://www.joeboyd.co.uk

Although I don't have all the details yet, I have learned that Frederiksberg Records, a small, eclectic label from New York, is in the process of reissuing the hard to find (and even harder to pay for) jazz obscurity, Milt Ward and Virgo Spectrum. You can find out more by keeping tabs on Frederiksberg's Bandcamp page, https://frederiksbergrecords.bandcamp.com   I'm told there is a bootleg out there so be careful. Frederiksberg is doing this project with the participation of the family of Milt Ward, which is to be applauded. Hopefully, this will give more access to a great jazz record at a reasonable price. The Roots album reissue from Frederiksberg (which is sold out on vinyl on the Frederiksberg Records bandcamp site) still appears to be available through some online retailers as a pre-order, so that's another one to jump on now if you can find it-- the original is extremely pricey and … END_OF_DOCUMENT_TOKEN_TO_BE_REPLACED

Clem Snide- Forever Just Beyond With a name derived from a character in the same literary work as the band name so famously identified with the Walter Becker-Donald Fagen duo, Clem Snide has an extensive discography, typically cataloged as “alt country.” This latest release is the work of one of its founding members, Eef Barzelay, who was responsible for much of the songwriting and singing. According to his bio, Barzelay suffered some serious bumps in the road during the last decade, including a failing marriage and financial ruin. At the same time, he learned that Scott Avett was a fan and they found inspiration in each other, leading to this album- a collaboration of artistry where Avett and Barzelay share some writing credits and Avett produces. The result is a fresh, upbeat set of tunes that are appealing in their simplicity and refreshing in their sincerity. The band is first tier … END_OF_DOCUMENT_TOKEN_TO_BE_REPLACED

Muriel Grossmann- Reverence Muriel Grossmann continues her quest for musical ascension on Reverence, which was released on vinyl in early December, 2019 on the RR Gems label as a 2 LP set. The compositions are Grossmann’s, and the band is much the same as the group of seasoned musicians with whom she has worked for some time (and detailed in the review of her Golden Rule), but for one notable exception: the addition of a keyboard player who brings that rich, woody Hammond B-3 sound to a series of compositions devoted to Africa. In some ways, Ms. Grossmann’s exploration of the roots of jazz deliberately eschews any superficial attempt to make African music. Instead, she draws inspiration from its influences, which are wide ranging and deep—you can hear rhythm and blues sounds mixed with more traditional African instrumentation and polyrhythms and come away with something that is both … END_OF_DOCUMENT_TOKEN_TO_BE_REPLACED

Stylus Life- StylusTimer Stylus life is a recurring question in audio discussions. Some serious attention was devoted to the subject here, in Mike Bodell’s “The Finish Line for Your Phono Stylus.” That article examined the issue from a number of perspectives, including early studies, claims by cartridge manufacturers and real-life experiences by users. It also generated a long, interesting thread on the Steve Hoffman forum that is worthwhile to read. The Hoffman thread also generated an experiment by Ray Parkhurst who documented the wear of a new stylus under certain controlled conditions, which included a microscopic examination of the stylus at various time intervals over long hours of repeated play. See https://forums.stevehoffman.tv/threads/the-finish-line-for-your-phono-cartridge-stylus-wear-by-mike-bodell.842572/#post-21292730.   Whether you lean toward more optimistic … END_OF_DOCUMENT_TOKEN_TO_BE_REPLACED

Incoming! (More Interesting Records)  An "interesting record" to me offers something unexpected, whether it is a fresh take on a recognized genre, or something that opens a new way of experiencing instruments in combination. It does not have to be "strange" or challenging to listen to; in fact, I'm a sucker for a good melodic hook and enjoy technical prowess as much as anybody, but there has got to be something "more"-- an intangible that differentiates the record from the millions of others to which we all have access.   As mentioned in a recent editorial, a lot of records come in and not all get written up. It’s not an editorial decision or any reflection of the music or sonics; I only have so much time, and I tend not to write short blurbs, but longer (some may say ‘too long’) reviews. My “incoming” piles continue to grow as I publish. This series of short capsules is meant to … END_OF_DOCUMENT_TOKEN_TO_BE_REPLACED