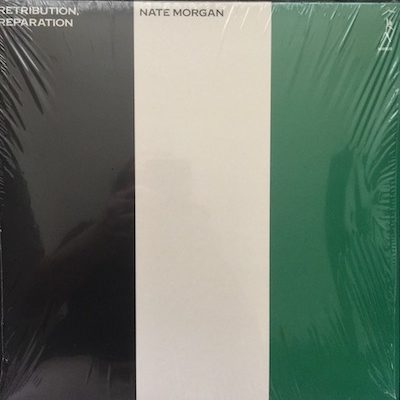 Nate Morgan- Retribution, Reparation Nate Morgan’s Retribution, Reparation follows his Journey Into Nigritia (covered here) and should be regarded in some ways a part of a continuum—Morgan was exploring a world that still remains undiscovered today—driven by love, not tyranny and inspired by the voices of the past to lead new generations toward a brighter future. The God of the Old Testament is called upon, and the archaic term for the land of blacks in Africa- “Nigritia” still figures into the liner notes, which are inspired by Marcus Garvey. Both albums were released on Nimbus... Read More 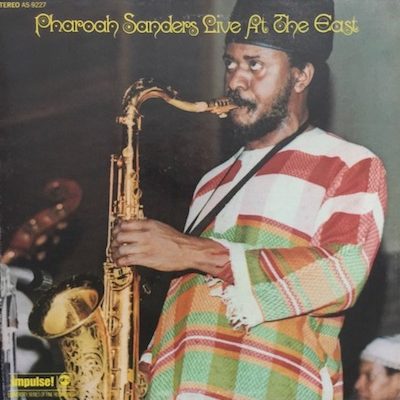 Pharoah Sanders Live at the East Pharoah Sanders Live at the East was released after Sanders had already come into his own with the album Karma, released on Impulse in 1969. Sanders was well recognized within the modern jazz community, having been mentored by the likes of  Coltrane and Sun Ra. Sanders appears on one of my favorite Alice Coltrane records, Ptah, the El Daoud, released in 1970. In 1972, Sanders released this live album, which can be found at reasonable prices despite the increasing market value of the older Impulse pressings. The line up on this album is stellar, from Cecil... Read More 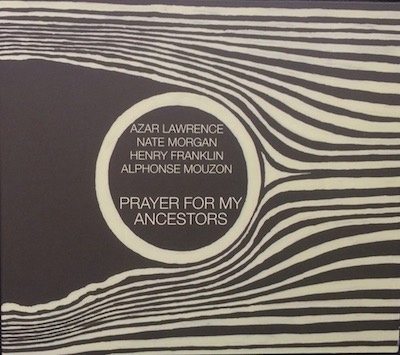 Azar Lawrence- Prayer for My Ancestors Azar Lawrence, whose work as a sideman (including with McCoy Tyner after Coltrane’s death) is well recognized, has been enjoying a recent resurgence -two of his albums from the mid-‘70s as a featured performer have been reissued by the Jazz Dispensary. This album seems to have been neglected so far and is worth seeking out, though I have only found it on CD (and even that has not been so easy to find). Released in 2008, Prayer for my Ancestors has a killer roster of players: Nate Morgan on piano, Henry Franklin (whose album, “The Skipper,” is... Read More 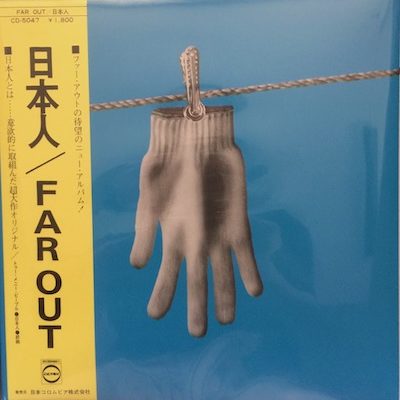 Two Rarities Reissued- Far Out and Stonewall You’ll be forgiven if neither of these albums– Far Out and Stonewall– was on your “pre-buy” list; both are somewhat obscure and highly collectible for different reasons. There is serious market for obscure psych and early hard rock that never made a commercial impact- the more obscure the better. Some of it is good, but the tariff is high, leading to all sorts of unlicensed reissues over the years. These two releases cover two important albums that, for the first time, purport to be licensed, authorized product.  Far... Read More 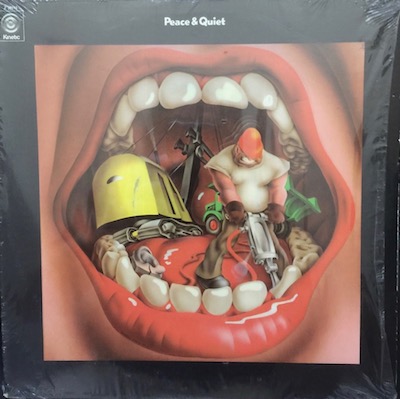 Peace & Quiet-self-titled Peace & Quiet is a period hard rock album that is not, as far as know, on anybody’s radar. It’s got great vocals, a guitar driven, heavy sound soaked with organ and is the perfect alternative to those classic hard rock favorites. The vocal parts here are just outstanding—think about how big the band Three Dog Night was back in the day; they cranked out a huge number of hits based on the strength of their harmonies. Today, almost nobody knows the band, let alone the musicians that played with them, but those harmonies? Ask somebody who qualifies for... Read More 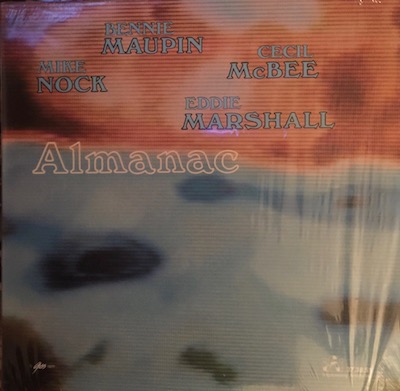 Almanac- Nock-Maupin-McBee-Marshall Almanac, featuring Mike Nock, Bennie Maupin, Cecil McBee and Eddie Marshall is a stunning album that draws its power from the strength of its performers, compositions that are melodic but adventurous and a recording that is so good that it qualifies as “demo” material. This is not “safe” jazz, but it isn’t aimless either: it works because the compositions are strong and the players are up to the task.  The recording, made at Columbia University, was mixed by David Baker and it’s wonderful, chock full of goodies that aren’t there for sonic... Read More 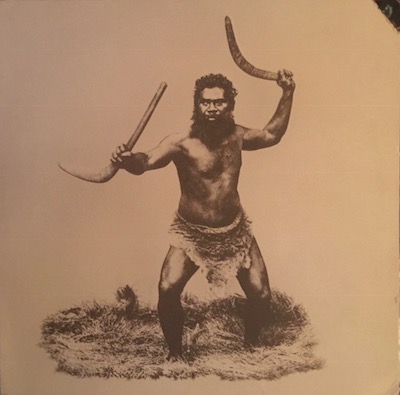 Boomerang featuring Mark Stein  Boomerang- by definition, something that returns to the originator. Mark Stein may have been ahead of his time. As a founding member of Vanilla Fudge, largely remembered for the hit “You Keep Me Hangin’ On,” Stein cultivated an organ rich sound that influenced other heavy organ rock bands, most notably, Deep Purple; Stein is credited as an originator of sounds that bridged psychedelia with what eventually became heavy metal. I’m not sure that is an entirely accurate picture of the music at the time; there were lots of “heavy rock” bands in the... Read More

Kent Glenn- Good for the Garden Kent Glenn’s Good for the Garden initially lured me in because the cover art was the antithesis of the music on the record. Glorious jazz from an L.A. composer who was, even at the time the album was released, “considered one of the most overlooked, underrated composers on the L.A. jazz scene.” (liner notes by Gary G. Vercelli, KPFK, L.A; Down Beat). The record starts with the title track — a harmonious horn section and some great drumming. “Ambivilance” -slows it down with a plaintive wail and some even/odd notes held in background- the... Read More 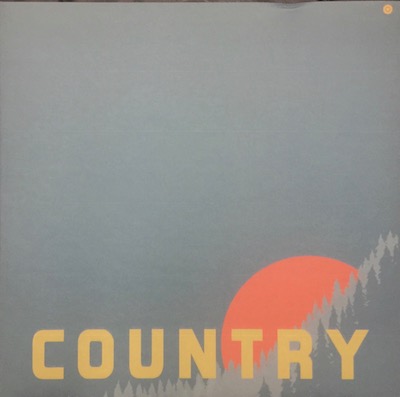 Bombadil- Beautiful Country Bombadil- I’ll confess to not knowing much about this band and further admit that I don’t listen to much “pop” music these days (in the sense of sweet songs that focus on harmonies and catchy hooks). I’ll also acknowledge that I really like this record—these guys are extremely accomplished—gorgeous harmonies, upbeat folk/ pop tunes and a recording that conveys enormously well- from deep bass and drum sounds to the tickle of plucked strings, the staging of the voices and handclaps.  I mentioned in my “Incoming” snapshot that this Bombadil... Read More 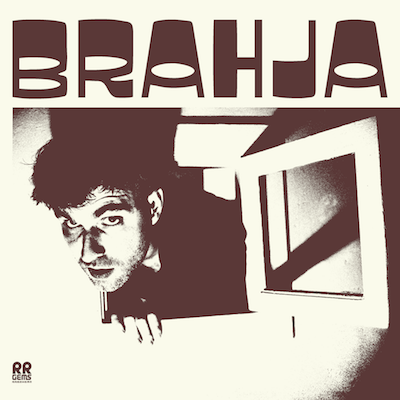 BRAHJA- Self-Titled A cooperative of musicians, led by Devin Brahja Waldman of New York, recorded this album in a de-sanctified church in rural Quebec (with additional recording and mixing in New York); it captures a marvelous mixture of sounds, textures and melodic themes composed, arranged and produced by Waldman (whose friends refers to him as “Brahja”). The group on this album is comprised of some core members who have played together for 11 years; many of them met in Montreal, where Waldman attended music school.  The album starts with “In the Mess,” cymbal tapping, drone and... Read More

Muriel Grossmann- Reverence Muriel Grossmann continues her quest for musical ascension on Reverence, which was released on vinyl in early December, 2019 on the RR Gems label as a 2 LP set. The compositions are Grossmann’s, and the band is much the same as the group of seasoned musicians with whom she has worked for some time (and detailed in the review of her Golden Rule), but for one notable exception: the addition of a keyboard player who brings that rich, woody Hammond B-3 sound to a series of compositions devoted to Africa. In some ways, Ms. Grossmann’s exploration of the roots of jazz deliberately eschews any superficial attempt to make African music. Instead, she draws inspiration from its influences, which are wide ranging and deep—you can hear rhythm and blues sounds mixed with more traditional African instrumentation and polyrhythms and come away with something that is both … END_OF_DOCUMENT_TOKEN_TO_BE_REPLACED

Stylus Life- StylusTimer Stylus life is a recurring question in audio discussions. Some serious attention was devoted to the subject here, in Mike Bodell’s “The Finish Line for Your Phono Stylus.” That article examined the issue from a number of perspectives, including early studies, claims by cartridge manufacturers and real-life experiences by users. It also generated a long, interesting thread on the Steve Hoffman forum that is worthwhile to read. The Hoffman thread also generated an experiment by Ray Parkhurst who documented the wear of a new stylus under certain controlled conditions, which included a microscopic examination of the stylus at various time intervals over long hours of repeated play. See https://forums.stevehoffman.tv/threads/the-finish-line-for-your-phono-cartridge-stylus-wear-by-mike-bodell.842572/#post-21292730.   Whether you lean toward more optimistic … END_OF_DOCUMENT_TOKEN_TO_BE_REPLACED

Incoming! (More Interesting Records)  An "interesting record" to me offers something unexpected, whether it is a fresh take on a recognized genre, or something that opens a new way of experiencing instruments in combination. It does not have to be "strange" or challenging to listen to; in fact, I'm a sucker for a good melodic hook and enjoy technical prowess as much as anybody, but there has got to be something "more"-- an intangible that differentiates the record from the millions of others to which we all have access.   As mentioned in a recent editorial, a lot of records come in and not all get written up. It’s not an editorial decision or any reflection of the music or sonics; I only have so much time, and I tend not to write short blurbs, but longer (some may say ‘too long’) reviews. My “incoming” piles continue to grow as I publish. This series of short capsules is meant to … END_OF_DOCUMENT_TOKEN_TO_BE_REPLACED

More on Milt Ward and Virgo Spectrum Courtesy of Bill Pierce, the former Chair of Woodwinds at Berklee. Pierce worked with Milt Ward in the late ‘60s, including a stint as part of the horn section for Stevie Wonder. Pierce figures prominently on the album, Milt Ward and Virgo Spectrum; I have added his recollections to the feature article.   (Scroll down to the bottom of the article). My thanks to Bill Pierce, whose band, the Ralph Peterson Messenger Legacy, is currently active and touring.     … END_OF_DOCUMENT_TOKEN_TO_BE_REPLACED

A Phono Bargain or Three The ever-resourceful Steve Leung (VAS) built me a Franken-Denon 103, repotted in a wooden body with a micro-ridge stylus. In my estimation, it's a phono bargain, given its performance. Wonderful tone and an advanced stylus shape. I have zero experience with stock Denon 103 cartridges, a perennial favorite among budgeteers and tweakers. This Franken-cartridge took advantage of various tweaks that have been performed by DIY'ers and retipping shops over the years-- rebodying the cartridge, using elastomers to 'pot' the cartridge motor assembly into a new body and retipping the old school conical stylus with a more modern profile. Steve did it all in one swoop for me. I didn't even have to supply the stock Denon- he sourced it and did his thing. Set up on a Kuzma 4 Point 9, which is  currently mounted on my vintage Technics SP-10, I’ve now got the vintage Quad ESL … END_OF_DOCUMENT_TOKEN_TO_BE_REPLACED