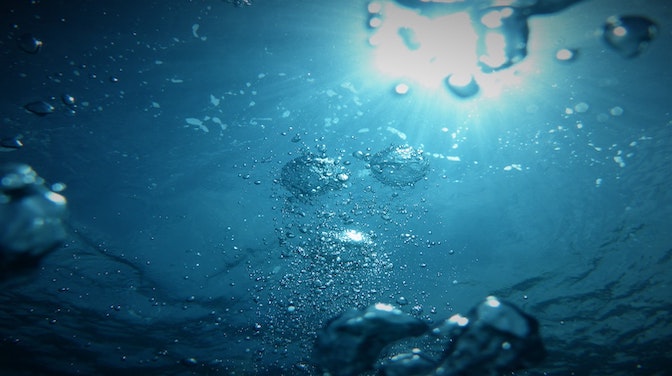 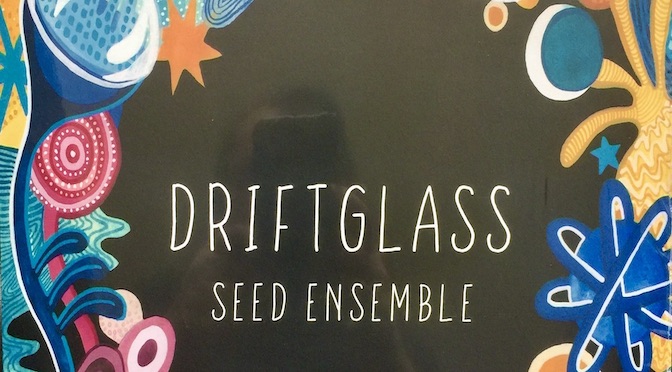 DRIFTGLASS by Seed Ensemble There is something very special about Driftglass by Seed Ensemble. For starters, it’s a hell of a lot of fun to listen to; when did you last experience that?  The album and ensemble are the brainchild of Cassie Kinoshi, a gifted performer, composer and arranger who leads a big band with a big sound and an eclectic, and sometimes unexpected, array of influences. What starts as a thrumming bass solo soon morphs into a stage full of instruments that mixes the avant-garde with something that resembles a James Bond film theme from the ‘60s—it’s cool stuff,... Read More 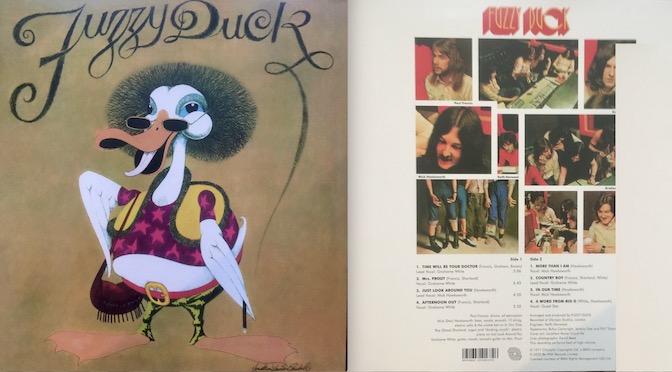 Fuzzy Duck- self titled (Be With Reissue)   Fuzzy Duck’s eponymous album is relatively obscure- it didn’t sell much at the time of release, with a limited pressing run and the group disbanded. But instead of fading into complete obscurity, the album enjoys a cult following with prices to match. Be With Records, the same outfit that did such a good job reissuing the Air album with Googie Coppola, just released this reissue, attainable by mere mortals for the cost of 4 lattes.  It’s well worth the cost. What you’ll hear is a UK psych hard rock band in top form circa 1971, with... Read More 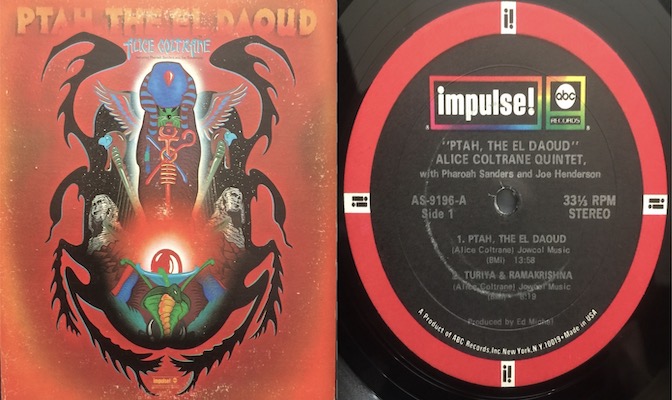 Alice Coltrane, Ptah, the El Daoud and the Coltrane Home Studio (Part I) Alice Coltrane’s Ptah, the El Daoud, has an inner luminosity that transcends its performances and composition; it is the rare album that captures not just brief moments of brilliance, but entire passages that transport the listener. The album is all the more remarkable for being out of print on vinyl since 1974. It was recorded in a studio built by the Coltranes in their Dix Hills home that was slated for demolition until a group of preservationists and family members stepped in to rescue it. This is the story of an... Read More

In the Court- Steve Wilson’s 50th Anniversary Remix on Vinyl  In the Court of the Crimson King was not just foundational to the emergence of “prog rock” but has endured long after many other influential and important early bands who tapped that vein fell into disfavor. I’ve had a number of copies of this record over the years, and settled on an early UK pink label (A3/B3) and a somewhat later UK pink rim (4u). The 2010 reissue of In the Court on vinyl, which drew from newly discovered source material was fine as far as it went but sounded a little clinical to my ears compared... Read More 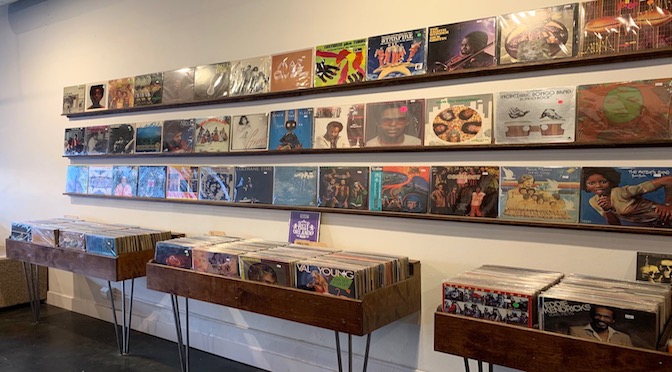 El Donut Shoppe— “Inspirational” Rare Jazz Records Rare jazz records have gotten pricey. I’ve patronized a number of dealers in the last few years, but there are a few that stand out. One is Uncle Tony’s El Donut Shoppe. It is not your “normal” record shop—think of it as a place of first or last resort when looking for hard to source, offbeat and rare jazz records: private or small label records and other rarities that seldom show up for sale in the marketplace (either at record stores or on the Internet) but are highly sought after by those looking for something a... Read More 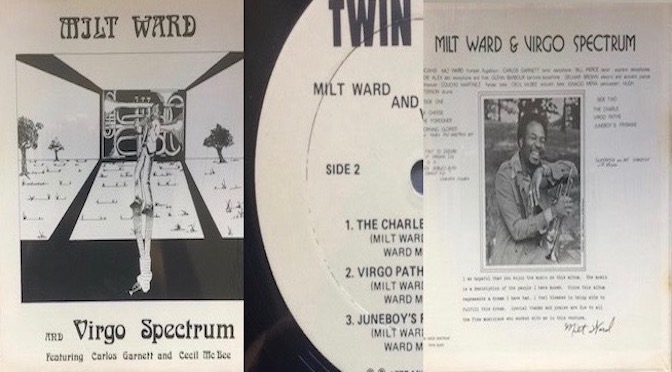 Milt Ward and Virgo Spectrum- Obscure Grail  This album, with Milt Ward as band leader and featuring Carlos Garnett on tenor sax and Cecil McBee on bass is fairly rare- it comes up occasionally for sale, but it took me time to get a copy. Released in 1977 (according to the copyright notices on the labels) on the utterly obscure Twin Quest label, little seems to be known about Ward or the sessions. He did appear as a trumpet player on a few other albums. Given the album’s rep as a “grail” it is surprising how little is known about it, particularly given the line... Read More 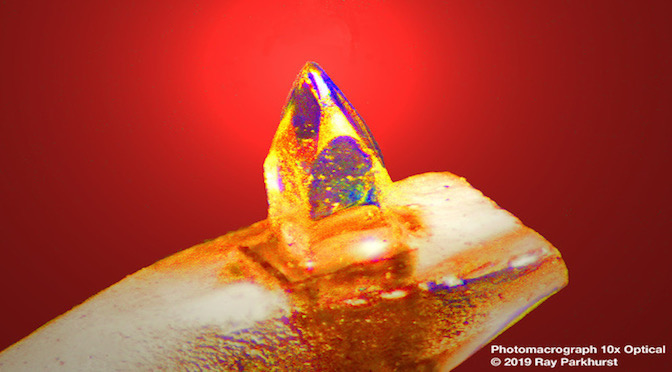 The Finish Line for Your Phonograph Stylus… By Mike Bodell, May 23, 2019  Based on an informal survey of friends who predominately play vinyl records, I believe the most neglected part of their audio system is the stylus on their phonograph cartridge. The stylus is a key component in an audio system and is subjected to the most wear. Yet when I asked folks in my network how many hours of play their cartridges have seen, they could not tell me with any accuracy; all ventured educated guesses. I’ve been there too. Given the value of records today, particularly rare and collectible jazz... Read More 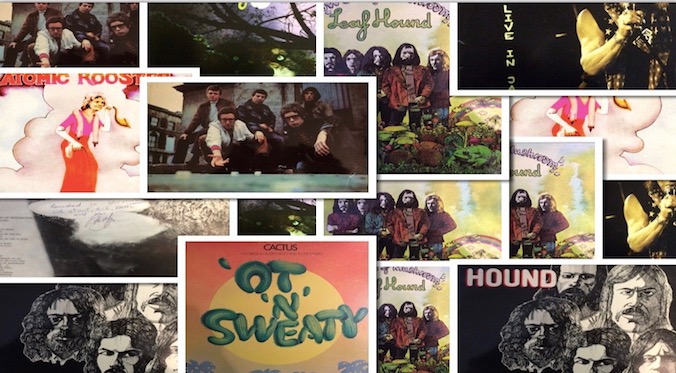 Leaf Hound- Growers of Mushroom; Famous Obscurity; Interview with Peter French﻿ Some albums develop a mythology based on rarity, the relative lack of commercial impact at the time of release and later recognition as an influence to other, more well known records by other bands. Leaf Hound’s “Growers of Mushroom” is one such album. It’s a famously “obscure” album, with original copies easily fetching well over $3,000 US. Apart from its desirability as a collectible, it’s actually a great hard rock album, its members drawn from Black Cat Bones,... Read More 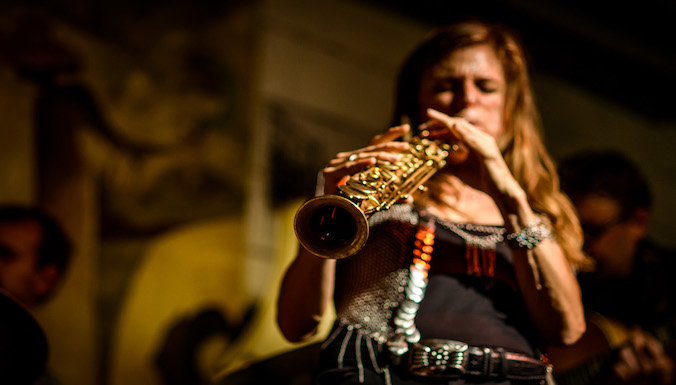 Muriel Grossmann and The Golden Rule There is something very alluring about the sounds Muriel Grossmann evokes on Golden Rule, her latest album, the first she has released on vinyl, and the third in a trilogy with a band consisting of Gina Schwarz on bass, Uros Stamenkovic on drums, and Radomir Milojkovic on guitar. Grossmann, born in Paris but living in Ibiza, has been able to capture the melodic style of, say, a Lester Young with the more ethereal sounds of Coltrane, who is often credited as an originator of the “spiritual jazz” movement.  What you hear is a muscular tenor... Read More

Although I don't have all the details yet, I have learned that Frederiksberg Records, a small, eclectic label from New York, is in the process of reissuing the hard to find (and even harder to pay for) jazz obscurity, Milt Ward and Virgo Spectrum. You can find out more by keeping tabs on Frederiksberg's Bandcamp page, https://frederiksbergrecords.bandcamp.com   I'm told there is a bootleg out there so be careful. Frederiksberg is doing this project with the participation of the family of Milt Ward, which is to be applauded. Hopefully, this will give more access to a great jazz record at a reasonable price. The Roots album reissue from Frederiksberg (which is sold out on vinyl on the Frederiksberg Records bandcamp site) still appears to be available through some online retailers as a pre-order, so that's another one to jump on now if you can find it-- the original is extremely pricey and … END_OF_DOCUMENT_TOKEN_TO_BE_REPLACED

Clem Snide- Forever Just Beyond With a name derived from a character in the same literary work as the band name so famously identified with the Walter Becker-Donald Fagen duo, Clem Snide has an extensive discography, typically cataloged as “alt country.” This latest release is the work of one of its founding members, Eef Barzelay, who was responsible for much of the songwriting and singing. According to his bio, Barzelay suffered some serious bumps in the road during the last decade, including a failing marriage and financial ruin. At the same time, he learned that Scott Avett was a fan and they found inspiration in each other, leading to this album- a collaboration of artistry where Avett and Barzelay share some writing credits and Avett produces. The result is a fresh, upbeat set of tunes that are appealing in their simplicity and refreshing in their sincerity. The band is first tier … END_OF_DOCUMENT_TOKEN_TO_BE_REPLACED

Muriel Grossmann- Reverence Muriel Grossmann continues her quest for musical ascension on Reverence, which was released on vinyl in early December, 2019 on the RR Gems label as a 2 LP set. The compositions are Grossmann’s, and the band is much the same as the group of seasoned musicians with whom she has worked for some time (and detailed in the review of her Golden Rule), but for one notable exception: the addition of a keyboard player who brings that rich, woody Hammond B-3 sound to a series of compositions devoted to Africa. In some ways, Ms. Grossmann’s exploration of the roots of jazz deliberately eschews any superficial attempt to make African music. Instead, she draws inspiration from its influences, which are wide ranging and deep—you can hear rhythm and blues sounds mixed with more traditional African instrumentation and polyrhythms and come away with something that is both … END_OF_DOCUMENT_TOKEN_TO_BE_REPLACED

Stylus Life- StylusTimer Stylus life is a recurring question in audio discussions. Some serious attention was devoted to the subject here, in Mike Bodell’s “The Finish Line for Your Phono Stylus.” That article examined the issue from a number of perspectives, including early studies, claims by cartridge manufacturers and real-life experiences by users. It also generated a long, interesting thread on the Steve Hoffman forum that is worthwhile to read. The Hoffman thread also generated an experiment by Ray Parkhurst who documented the wear of a new stylus under certain controlled conditions, which included a microscopic examination of the stylus at various time intervals over long hours of repeated play. See https://forums.stevehoffman.tv/threads/the-finish-line-for-your-phono-cartridge-stylus-wear-by-mike-bodell.842572/#post-21292730.   Whether you lean toward more optimistic … END_OF_DOCUMENT_TOKEN_TO_BE_REPLACED

Incoming! (More Interesting Records)  An "interesting record" to me offers something unexpected, whether it is a fresh take on a recognized genre, or something that opens a new way of experiencing instruments in combination. It does not have to be "strange" or challenging to listen to; in fact, I'm a sucker for a good melodic hook and enjoy technical prowess as much as anybody, but there has got to be something "more"-- an intangible that differentiates the record from the millions of others to which we all have access.   As mentioned in a recent editorial, a lot of records come in and not all get written up. It’s not an editorial decision or any reflection of the music or sonics; I only have so much time, and I tend not to write short blurbs, but longer (some may say ‘too long’) reviews. My “incoming” piles continue to grow as I publish. This series of short capsules is meant to … END_OF_DOCUMENT_TOKEN_TO_BE_REPLACED