home
You are here: Home / Records / Get Yourself a New Broom: Chatting with Guy Van Duser 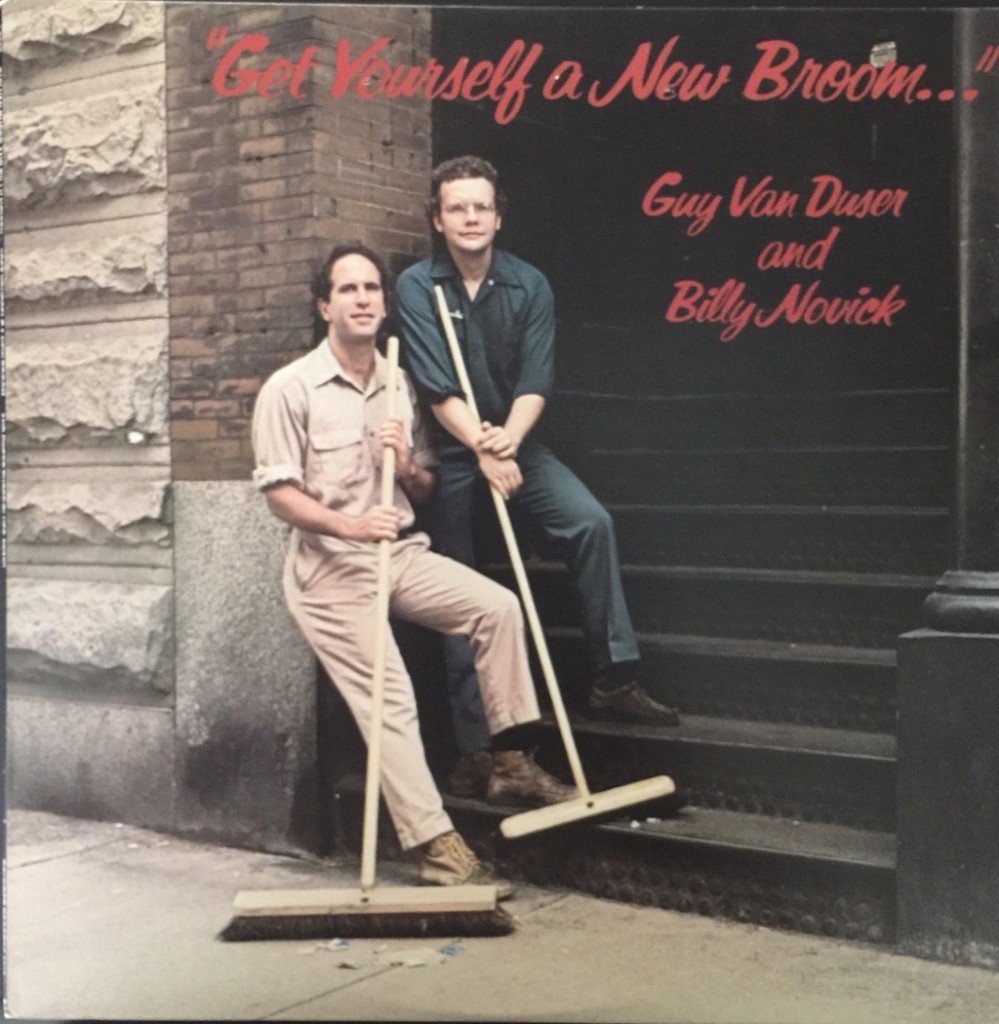 This album, by Guy Van Duser and Billy Novick, was released on Rounder Records in late 1979. I played it years ago for a music industry colleague, who turned to me after listening to the track, “I’m Coming, Virginia,” and said: “I just had this weird ‘sense memory’- something that I hadn’t thought of since I was a kid. That clarinet sounded so real, I could smell the wax we used on the instrument.” This record is that good. (And for those who like “audiophile” quality records, this is one; it is open sounding, and the bass tone played at the end of the piece will satisfy even the “big system” guys).

Van Duser, who currently teaches at the Berklee School of Music is, in his own words, an “oddball.” He’s a master player, a gifted fingerpicking guitarist, arranger and folklorist with a penchant for swing. He’s pretty famous for an arrangement of “Stars and Stripes” recorded by Chet Atkins, but his own playing on this record, with Novick (the woodwind player), is thrilling. Don’t be put off by the “old timey” aspect; it might help you understand why “swing” was the rock music of its era- it really did swing.

I talked to Van Duser about the recording, Chet Atkins and Van Duser’s playing style. Here’s what Van Duser told me:

“Get Yourself a New Broom” was the first time I recorded with a full band. Billy and I have been playing together as a duo for almost 40 years,[1] but at the time, I hadn’t worked or recorded with a full band. It was a learning experience for me. All the basic tracks were laid down with no overdubbing; the bassist, Brian Torff, was extremely accomplished, and he’s behind that deep tone you hear at the end of “I’m Coming, Virginia.” It was an Eb, just a half-step below concert. But Brian bowed that note as though he were growing it right out of the floor! Brian played on our follow-up quartet LP, “Raisin’ The Rent” (for which Garrison Keillor wrote the liner notes).

The rest of the band was top tier. Vinny Giordano[2] played tuba, Art Baron, the trombonist, had played with Duke Ellington; drummer Bob Jackson was a well regarded jazz drummer and Mike Avery, who was the drummer in a Boston blues band, had worked with Billy before:

“I did overdub some of my guitar parts, and John Nagy, who owned the studio, made some deliberate choices, with the engineer, to close mike my guitar- they told me, ‘Ok go ahead and play, but don’t move!’” 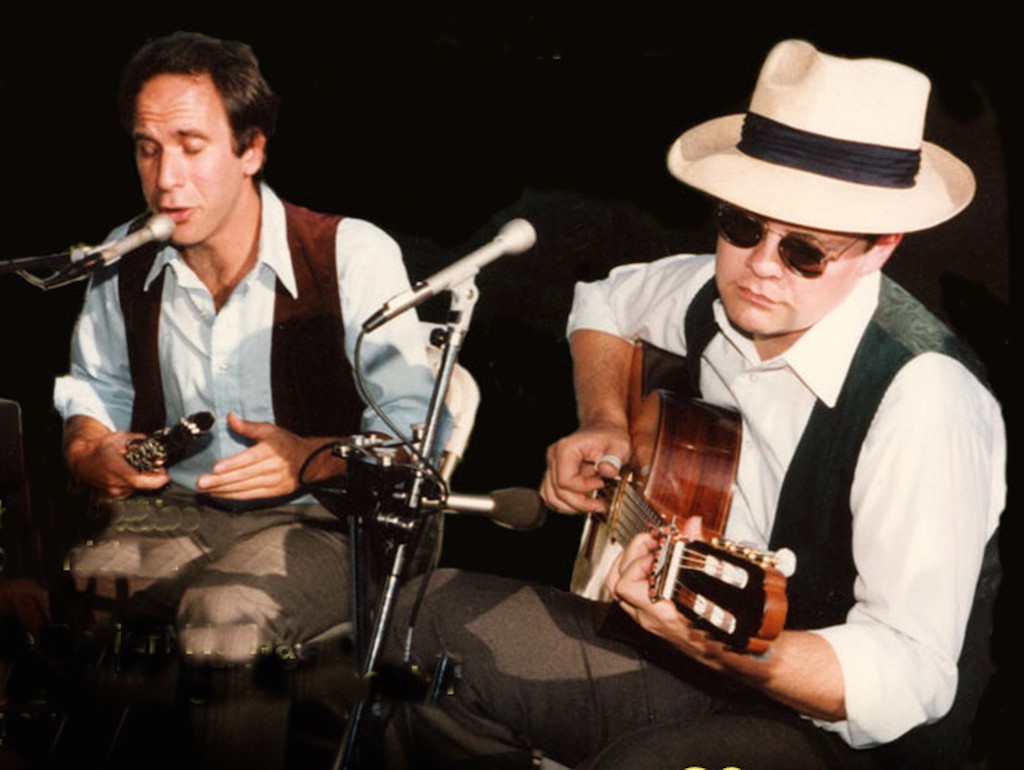 Van Duser wasn’t aware that this record was an underground “audiophile” favorite but he wasn’t surprised, given the work that went into the recording: “We kept the sides short because Nagy, who also mastered the album, wanted more room for the grooves. His studio was in a big old home in Newton, and he knew what he was doing.”

I also asked Van Duser about the Atkins’ connection:

“I knew Chet for about 25 years. We developed a relationship when he recorded my arrangement of “Stars and Stripes”[3]; he was a hugely influential figure for me, long before I met him.”

Atkins’ fingerpicking style, typically associated with “country” or “western” music, took an interesting turn early in Atkins’ career, when he recorded an album of jazz and pop standards; that album, A Session with Chet Atkins (RCA LPM-1090), has been an inspiration for Van Duser throughout his career. Van Duser admits that it’s hard to label his own style; while it has a country flavor, it’s clearly jazz-influenced.

If you are curious about the Atkins’ record, original pressings are cheaply and readily available- it has not been reissued on vinyl, despite recent audiophile interest in older mono recordings. 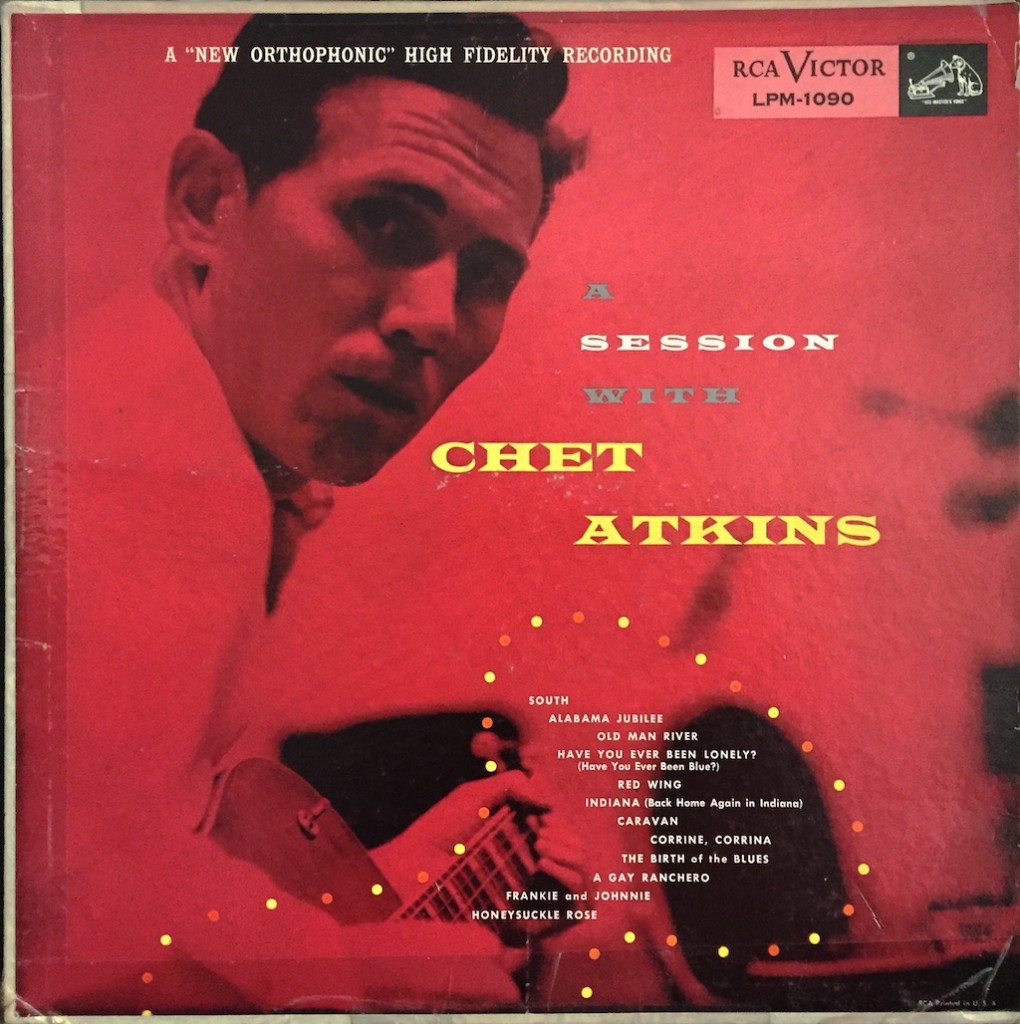 Van Duser also gave me a little teaser: he’s already recorded an homage to the Chet Atkins’ “Session” album, entitled A Session with Guy Van Duser and plans to release it on vinyl. He assembled a top tier band (those folks at the Berklee College of Music are there for a reason) and, though recorded digitally, it was mixed to tape. I will post an update here when the album is released on vinyl. [4]

In the meantime, you can find an original Rounder pressing of Get Yourself a New Broom for little more than the cost of postage. 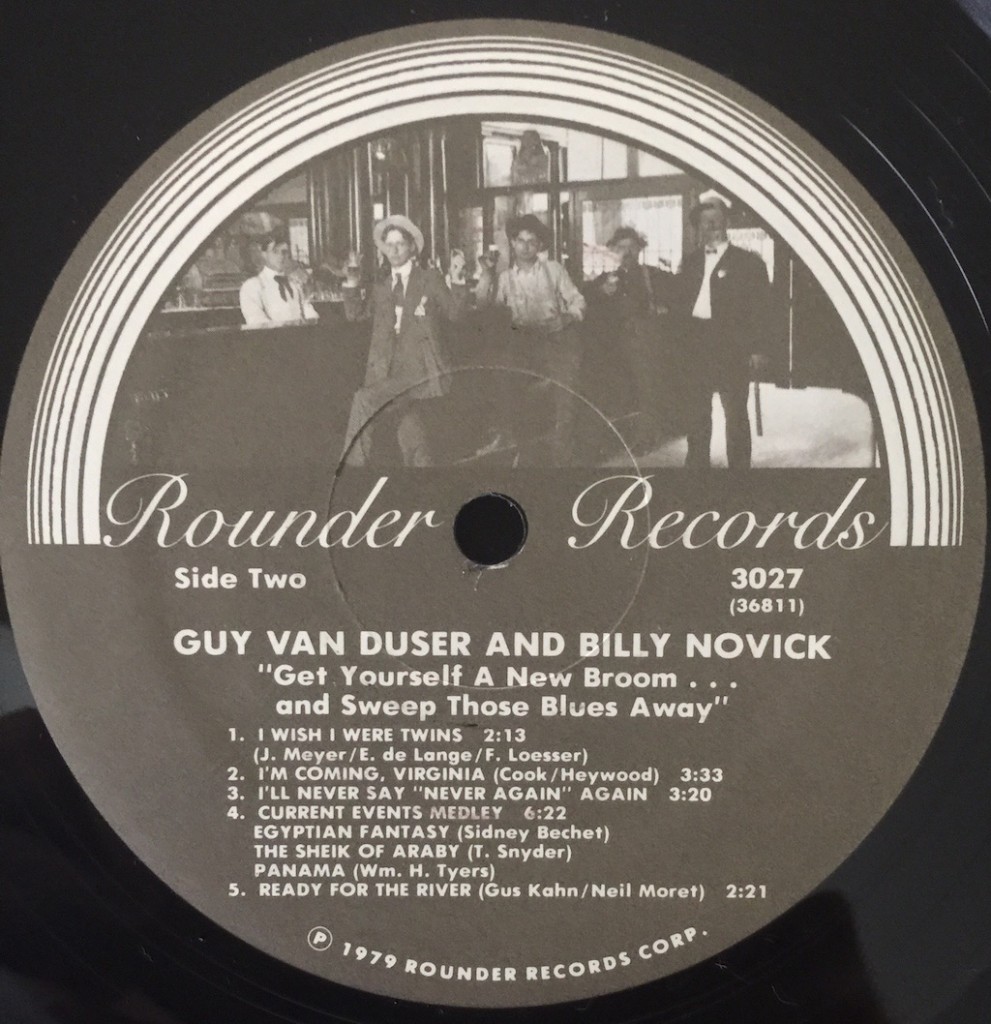 Rounder was purchased by the Concord Music group several years ago. I don’t know what they plan to do in re-releasing their marvelous back catalog of bluegrass, folk and what is now referred to as “roots music” on vinyl,[5] but there are a lot of riches here. This record is one of them.

[1] An anniversary gig is planned and will probably be at a club at which the duo often appears: Club Passim, on Harvard Square in Cambridge. (The club used to be known as “Club 47” and is a Cambridge institution for folk and jazz).

[2] Giordano is a guru of big band history and plays regularly in NYC. It was Giordano and his band that appeared in the nightclub scenes throughout the recent HBO series, “Boardwalk Empire,” a period gangster drama set during the Prohibition Era.

[3] The arrangement first appeared on Van Duser’s solo album, Finger Style Guitar Solos (Rounder, 1976) and the Atkins’ performance was released on The Best of Chet on the Road in 1980.

[4] Van Duser doesn’t maintain a website but you can follow him and check his performance schedule at Billy Novick’s site.

[5] I reached out to Rounder about this, and if I get an answer, will report what I learn.

Although I don't have all the details yet, I have learned that Frederiksberg Records, a small, eclectic label from New York, is in the process of reissuing the hard to find (and even harder to pay for) jazz obscurity, Milt Ward and Virgo Spectrum. You can find out more by keeping tabs on Frederiksberg's Bandcamp page, https://frederiksbergrecords.bandcamp.com   I'm told there is a bootleg out there so be careful. Frederiksberg is doing this project with the participation of the family of Milt Ward, which is to be applauded. Hopefully, this will give more access to a great jazz record at a reasonable price. The Roots album reissue from Frederiksberg (which is sold out on vinyl on the Frederiksberg Records bandcamp site) still appears to be available through some online retailers as a pre-order, so that's another one to jump on now if you can find it-- the original is extremely pricey and … END_OF_DOCUMENT_TOKEN_TO_BE_REPLACED

Clem Snide- Forever Just Beyond With a name derived from a character in the same literary work as the band name so famously identified with the Walter Becker-Donald Fagen duo, Clem Snide has an extensive discography, typically cataloged as “alt country.” This latest release is the work of one of its founding members, Eef Barzelay, who was responsible for much of the songwriting and singing. According to his bio, Barzelay suffered some serious bumps in the road during the last decade, including a failing marriage and financial ruin. At the same time, he learned that Scott Avett was a fan and they found inspiration in each other, leading to this album- a collaboration of artistry where Avett and Barzelay share some writing credits and Avett produces. The result is a fresh, upbeat set of tunes that are appealing in their simplicity and refreshing in their sincerity. The band is first tier … END_OF_DOCUMENT_TOKEN_TO_BE_REPLACED

Muriel Grossmann- Reverence Muriel Grossmann continues her quest for musical ascension on Reverence, which was released on vinyl in early December, 2019 on the RR Gems label as a 2 LP set. The compositions are Grossmann’s, and the band is much the same as the group of seasoned musicians with whom she has worked for some time (and detailed in the review of her Golden Rule), but for one notable exception: the addition of a keyboard player who brings that rich, woody Hammond B-3 sound to a series of compositions devoted to Africa. In some ways, Ms. Grossmann’s exploration of the roots of jazz deliberately eschews any superficial attempt to make African music. Instead, she draws inspiration from its influences, which are wide ranging and deep—you can hear rhythm and blues sounds mixed with more traditional African instrumentation and polyrhythms and come away with something that is both … END_OF_DOCUMENT_TOKEN_TO_BE_REPLACED

Stylus Life- StylusTimer Stylus life is a recurring question in audio discussions. Some serious attention was devoted to the subject here, in Mike Bodell’s “The Finish Line for Your Phono Stylus.” That article examined the issue from a number of perspectives, including early studies, claims by cartridge manufacturers and real-life experiences by users. It also generated a long, interesting thread on the Steve Hoffman forum that is worthwhile to read. The Hoffman thread also generated an experiment by Ray Parkhurst who documented the wear of a new stylus under certain controlled conditions, which included a microscopic examination of the stylus at various time intervals over long hours of repeated play. See https://forums.stevehoffman.tv/threads/the-finish-line-for-your-phono-cartridge-stylus-wear-by-mike-bodell.842572/#post-21292730.   Whether you lean toward more optimistic … END_OF_DOCUMENT_TOKEN_TO_BE_REPLACED

Incoming! (More Interesting Records)  An "interesting record" to me offers something unexpected, whether it is a fresh take on a recognized genre, or something that opens a new way of experiencing instruments in combination. It does not have to be "strange" or challenging to listen to; in fact, I'm a sucker for a good melodic hook and enjoy technical prowess as much as anybody, but there has got to be something "more"-- an intangible that differentiates the record from the millions of others to which we all have access.   As mentioned in a recent editorial, a lot of records come in and not all get written up. It’s not an editorial decision or any reflection of the music or sonics; I only have so much time, and I tend not to write short blurbs, but longer (some may say ‘too long’) reviews. My “incoming” piles continue to grow as I publish. This series of short capsules is meant to … END_OF_DOCUMENT_TOKEN_TO_BE_REPLACED