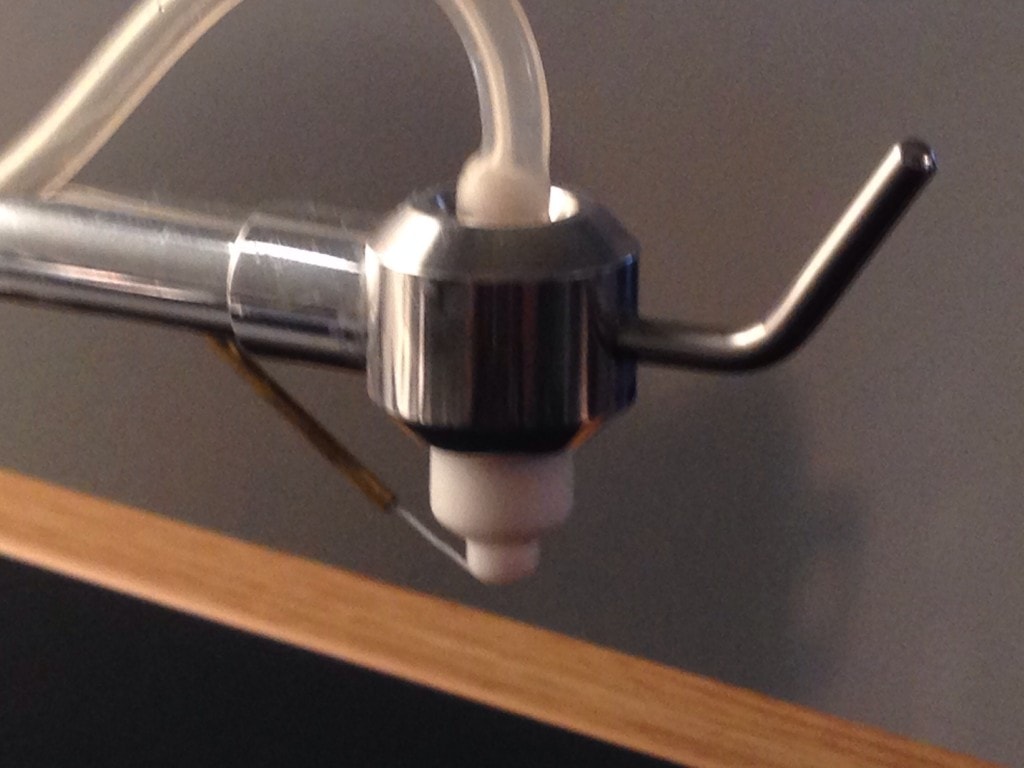 For decades, I had a pretty casual relationship with record cleaning.   I own a lot of records, bought my first vacuum record cleaning machine in the mid-80’s and didn’t give record cleaning much thought:  I’d use one brand or another of commercially available fluid (there were fewer options in those days and occasionally I’d mix up some home brew), apply it, vacuum it using the “cleaning machine” and done. Clean is clean, right?

What started me down the path of exploring vinyl record cleaning in more depth over the past couple years was a combination of circumstances: I had purchased some highly collectible old records at a decent price that just wouldn’t play well- they had a noticeable distortion on certain passages- a ‘fuzzy,’ ‘clipped’ sound that I (used to) associate with groove damage. If it was newish record or one that was easily replaceable- I would do just that. But, given the relative scarcity of the records in question and their cost, I pushed on- trying to improve the playback quality of these blighted discs through a combination of cleaning methods, using manual scrubbing, enzyme fluids and ultrasonic cleaning.  And I largely succeeded, but not without some effort. What this taught me was that cleaning was far more than a clean looking surface, and made a profound difference in the playability of a record.

I can’t say that my approach was “scientific” in the sense that I knew precisely why a particular combination of methods achieved better results.  I had purchased one of the new ultrasonic record cleaning machines and had already cleaned many hundreds of records with it. For a number of years, I had been experimenting with various enzyme-based cleaning fluids specifically designed for vinyl records.  Using both conventional fluid cleaning and vacuum, combined with ultrasonic cleaning seemed to work synergistically.  But, the records I had ultimately been able to “revive” had already been through all those steps at least once and still had “issues” until I doubled down, did multiple cleanings, some longer enzyme soaks and reversed the sequence of steps I used. (I will explain some of my “tricks” in a later installment but for now, know that I have not found a foolproof method to any of this). Of course I was mindful of the old adage that repeated cleanings, no matter what the method, result in some level of improvement.  But, I did learn one thing: what I thought was irreparable groove damage was in some cases the effect of ground-in, glued-in contaminants that I could remove from the grooves, if only with some difficulty.  Which left me with a lot of questions and led to exploring different approaches and methods to vinyl record cleaning.

How could I meaningfully evaluate the results of my cleaning efforts? Each old record is, in a sense, sui generis, in its unique history of contamination, making valid comparisons of cleaning two different records virtually impossible. (I could, perhaps, expose new records to the same contaminants and evaluate the results). There were a lot of other “unknowns”: were different vinyl formulations  more susceptible to the effects of contamination or inherently more noisy? Was there any way to identify the particular contaminants affecting a given record or match that to a cleaning approach that promised better results? Was there one “all purpose” method or combination of methods that worked effectively, across the board on a wide variety of different records with different problems?

Despite the fact that much of this should be a matter of chemistry, plastics and hard science, there is a lot of information that I seemed to be missing- the exact formulation of certain vinyl compounds from which records are made, to the extent it matters, is not something you can readily look up. What goes into the various cleaning fluids on the market today is largely proprietary, making it difficult for the average user to analyze what ingredients work best; what we have, instead, is largely anecdotal evidence of effectiveness of different cleaning methods based on user experience. At the same time, some records, even new records, exhibit problems that no amount of cleaning will ameliorate. Bad pressings, warping, deep scratches, off-center spindle holes and damage caused by abuse, sloppy handling or inappropriate packaging may be irreparable. But, many records, including records that I would have written off as “damaged,” actually suffered from the effects of contamination, sometimes decades of grit, dust, sleeve detritus and the residue of past “cleanings” as well as the effects of cigarette smoke and other airborne pollutants that could, with some effort, be removed. We are also told about the effects of “mold release” compounds and the need to remove them from the surface of new records, something about which there seems to be little clear information.

All of that led to this piece, which was borne out of self-interest and a degree of intellectual curiosity- were there any hard “facts” and guidelines that one could apply? I read quite a bit, poked around on the Internet, and even started a thread on the Hoffman board about ‘Best Practices’ to compare notes with other users.

It is easy enough to report my findings, which I will do. But I also have many unanswered questions, which I’m going to try to come to grips with by tapping some “outside expertise” in the course of writing this piece (which i envision as a continuing series of articles, rather than a single piece).

The first installment of this series on record cleaning begins with a visit to the U.S. Library of Congress archive, responsible for the restoration and preservation of our national repository of sound recordings. See Part II- Cleaning and Archival Standards of Care.

There Is No “Magic Bullet” in Hi-Fi No Magic Solutions I’ve spent some time on the audio chat fora over the years. Many popular threads these days are devoted to cheap improvements that can be made using audiophile “tweaks” or repurposed non-audiophile products. These can be applied to isolate gear, enhance the signals or connections or otherwise address some perceived problem that, once solved, offers to raise the level of music reproduction. It’s like a cheap solution to upgrade your system: from audiophile fuses, special wires (beyond simply having a high-quality interconnect, speaker wire or power cable) and other tweaks, to contact fluids and other things that you can attach to power sources, equipment, or place in the room (bowls, various harmonizers or active resonators, noise harvesters, etc.) This is apart from room treatment, which is sui generis; that is, every situation is … END_OF_DOCUMENT_TOKEN_TO_BE_REPLACED

Milt Ward Reissue-release date May 6, 2022  Andreas Vingaard, of Frederiksberg Records, dropped me a note that the Milt Ward & Virgo Spectrum record about which much has been written here will be available on vinyl beginning on May 9, 2022. However, several promo emails today, Friday, May 6, 2022 say the record is available NOW via Bandcamp (see link below). The reissue was done with the participation of Milt Ward’s family and includes comprehensive notes in a booklet. Given the price of original pressings, this should be worthwhile even if not taken from the master tape. I plan to get a copy and we’ll do a shoot-out with my “OG” pressing. I’m sure some of you are willing to brook a little sonic compromise to get access to an otherwise very hard to find, expensive spiritual jazz rarity. At the time of this writing there is one copy on Discogs in NM condition for media for over … END_OF_DOCUMENT_TOKEN_TO_BE_REPLACED

Although I don't have all the details yet, I have learned that Frederiksberg Records, a small, eclectic label from New York, is in the process of reissuing the hard to find (and even harder to pay for) jazz obscurity, Milt Ward and Virgo Spectrum. You can find out more by keeping tabs on Frederiksberg's Bandcamp page, https://frederiksbergrecords.bandcamp.com   I'm told there is a bootleg out there so be careful. Frederiksberg is doing this project with the participation of the family of Milt Ward, which is to be applauded. Hopefully, this will give more access to a great jazz record at a reasonable price. The Roots album reissue from Frederiksberg (which is sold out on vinyl on the Frederiksberg Records bandcamp site) still appears to be available through some online retailers as a pre-order, so that's another one to jump on now if you can find it-- the original is extremely pricey and … END_OF_DOCUMENT_TOKEN_TO_BE_REPLACED

Clem Snide- Forever Just Beyond With a name derived from a character in the same literary work as the band name so famously identified with the Walter Becker-Donald Fagen duo, Clem Snide has an extensive discography, typically cataloged as “alt country.” This latest release is the work of one of its founding members, Eef Barzelay, who was responsible for much of the songwriting and singing. According to his bio, Barzelay suffered some serious bumps in the road during the last decade, including a failing marriage and financial ruin. At the same time, he learned that Scott Avett was a fan and they found inspiration in each other, leading to this album- a collaboration of artistry where Avett and Barzelay share some writing credits and Avett produces. The result is a fresh, upbeat set of tunes that are appealing in their simplicity and refreshing in their sincerity. The band is first tier … END_OF_DOCUMENT_TOKEN_TO_BE_REPLACED

Muriel Grossmann- Reverence Muriel Grossmann continues her quest for musical ascension on Reverence, which was released on vinyl in early December, 2019 on the RR Gems label as a 2 LP set. The compositions are Grossmann’s, and the band is much the same as the group of seasoned musicians with whom she has worked for some time (and detailed in the review of her Golden Rule), but for one notable exception: the addition of a keyboard player who brings that rich, woody Hammond B-3 sound to a series of compositions devoted to Africa. In some ways, Ms. Grossmann’s exploration of the roots of jazz deliberately eschews any superficial attempt to make African music. Instead, she draws inspiration from its influences, which are wide ranging and deep—you can hear rhythm and blues sounds mixed with more traditional African instrumentation and polyrhythms and come away with something that is both … END_OF_DOCUMENT_TOKEN_TO_BE_REPLACED