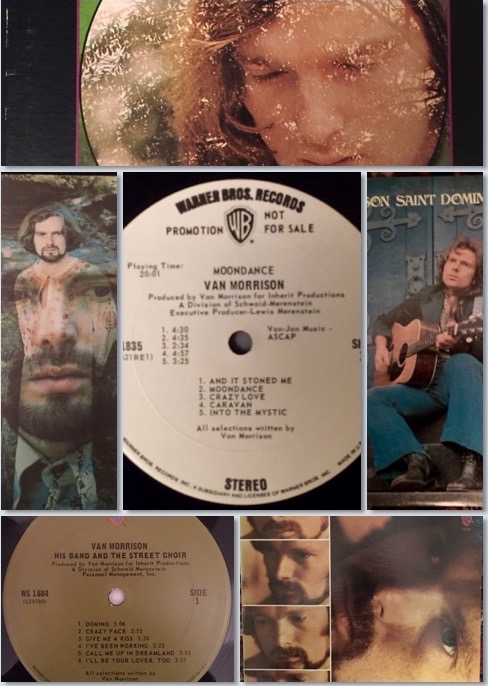 Van Morrison is a quixotic character, even by the standards usually applied to artists- a mercurial personality who has had some huge radio hit songs, but performs publicly with great reluctance; a man who created new paths for “soul” music and R & B who hails from Belfast and revels in his Celtic roots; an artist whose most critically acclaimed work was, for decades, far less commercially successful than the “pop” tunes for which he is most often recognized.

My introduction to Van Morrison’s work began with four albums released between 1970-72: Moondance, His Band and the Street Choir, Tupelo Honey and St. Dominic’s Preview. Although his first solo album, Blowin’ Your Mind (Bang Records, 1967) contained the radio staple, “Brown Eyed Girl,” I didn’t dig down into Van until later. Astral Weeks, his first album on Warners (1968), was too esoteric for me at the time; it took me many years to fully appreciate its jazzy poetry. Though a critical success, it was not a commercial one at the time. I’m not sure it is the best album as a point of entry to Van Morrison if you aren’t familiar with his early work. More about this album, below. 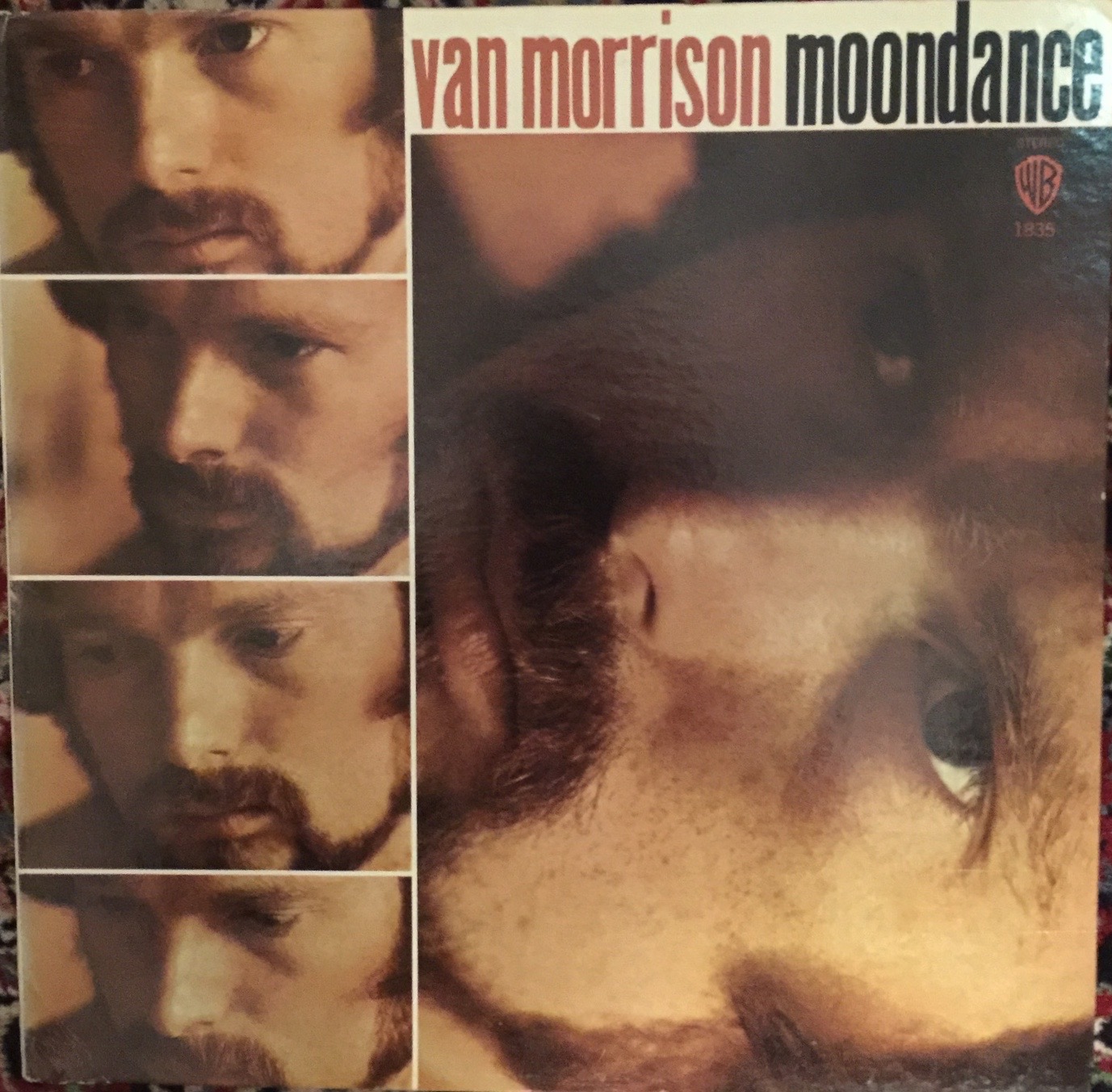 Moondance is, of course, the album that contains one of Van Morrison’s most well recognized tracks- the eponymous title track seems to be a romantic favorite for the ages. But, album offers far more: mostly short, accessible tunes, soulful and somewhat unconventional love songs that take advantage of his voice. I have several copies of this album including a WLP, shown below. 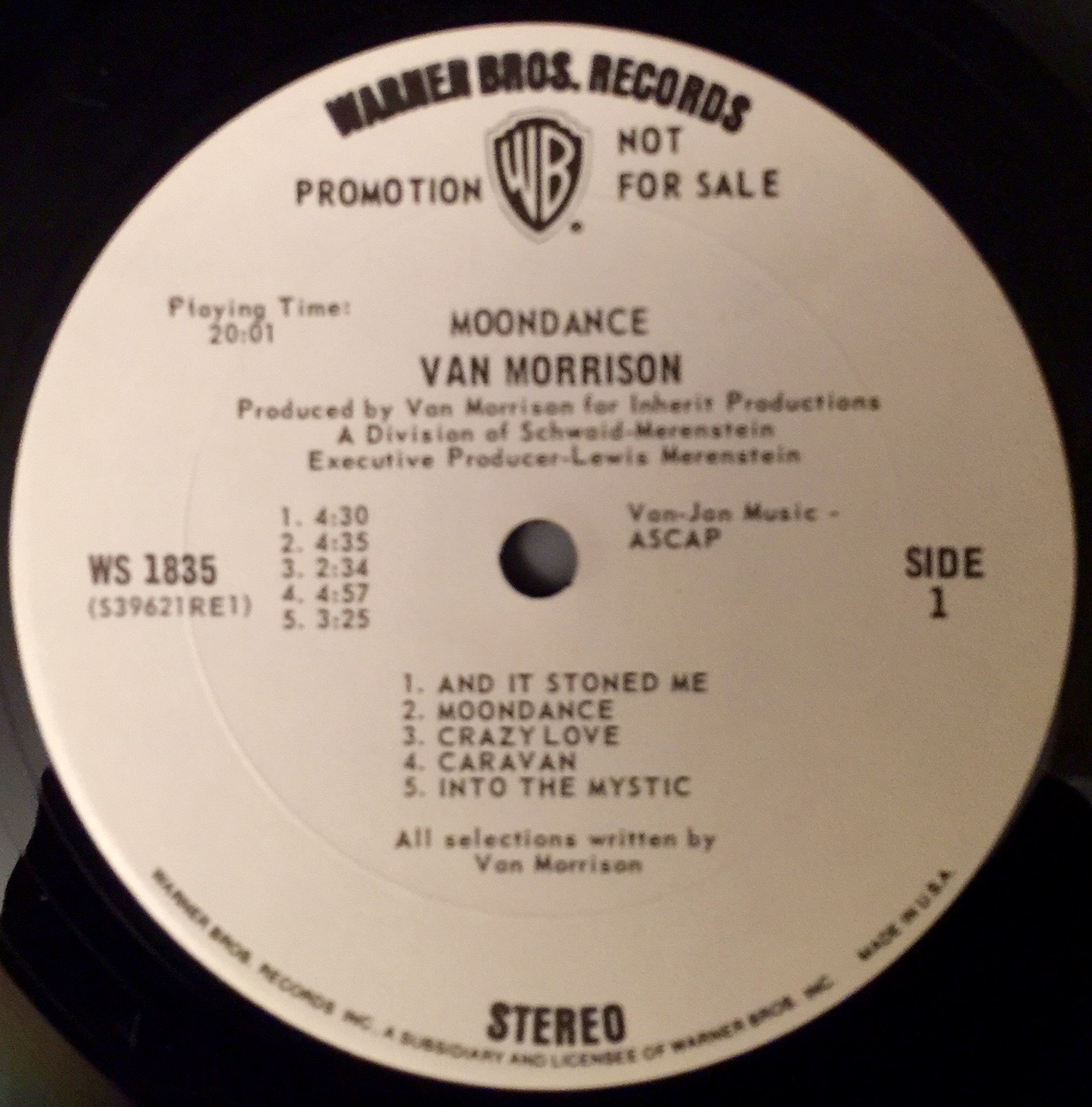 His Band and the Street Choir is also very accessible, a collection of short tuneful songs that work together as an album. I was always disturbed when “Domino” was played as a single track, without the next song, “Crazy Face,” which seemed to belong with it, of “a piece.” And so it is with the rest of this album: “I’ve Been Working,” “Call Me Up in Dreamland,” “I’ll Be Your Lover, Too” and “If I Ever Needed Someone” all benefit from the singer’s almost unique way of interpreting these songs, but none sound “the same.” It is one of this artist’s “great” albums in my estimation. Elliot Scheiner is given a credit as a “production coordinator” and the record was mastered at Sterling Sound (an “RL” no less). My copy is a “standard issue” green label that I probably bought new at the time. 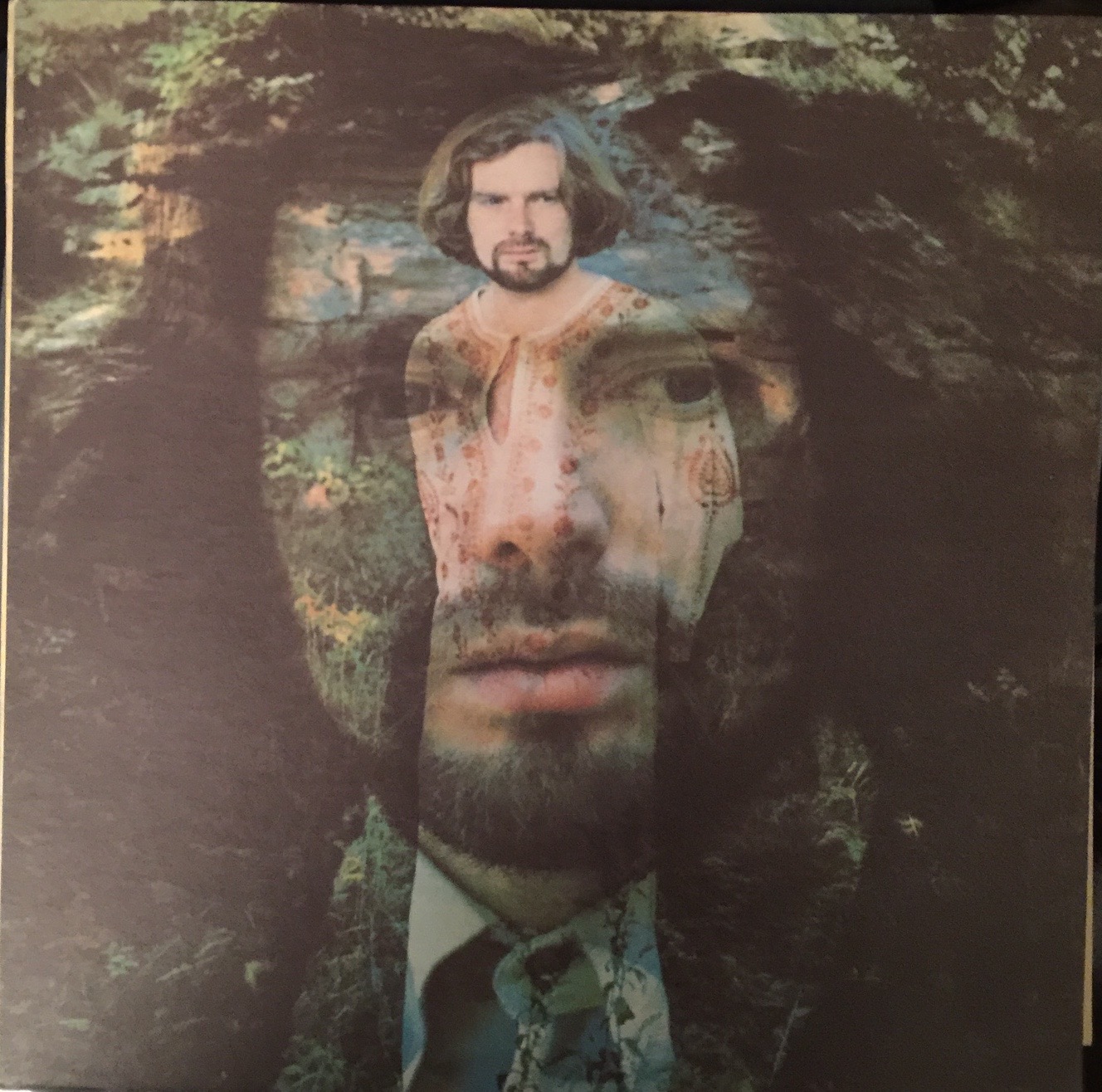 Tupelo Honey seems to continue where the Street Choir album leave off, and brings Ted Templeman into the fold as a producer.

I don’t think it is as strong an album as Street Choir or St. Dominic’s Preview. 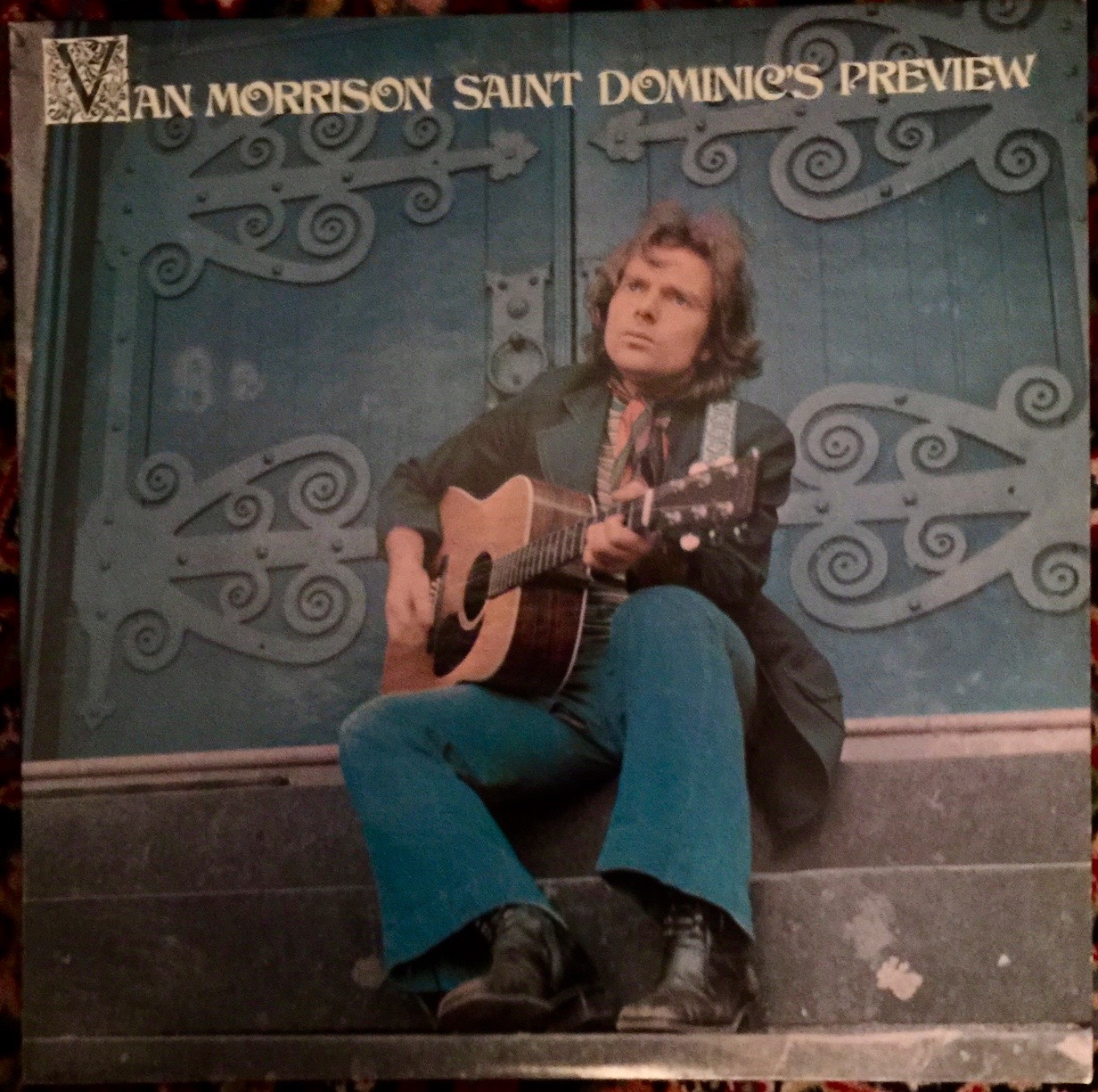 The first three tracks of side one of St. Dominic’s Preview are, in my estimation, as good as it gets: “Jackie Wilson Said (I’m in Heaven When You Smile)” is a soul-belter; the transition to “Gypsy” is studied contrast, and “I Will Be There” is rendered with such conviction that I can think of few singers that could bring this one home the way Van Morrison does. 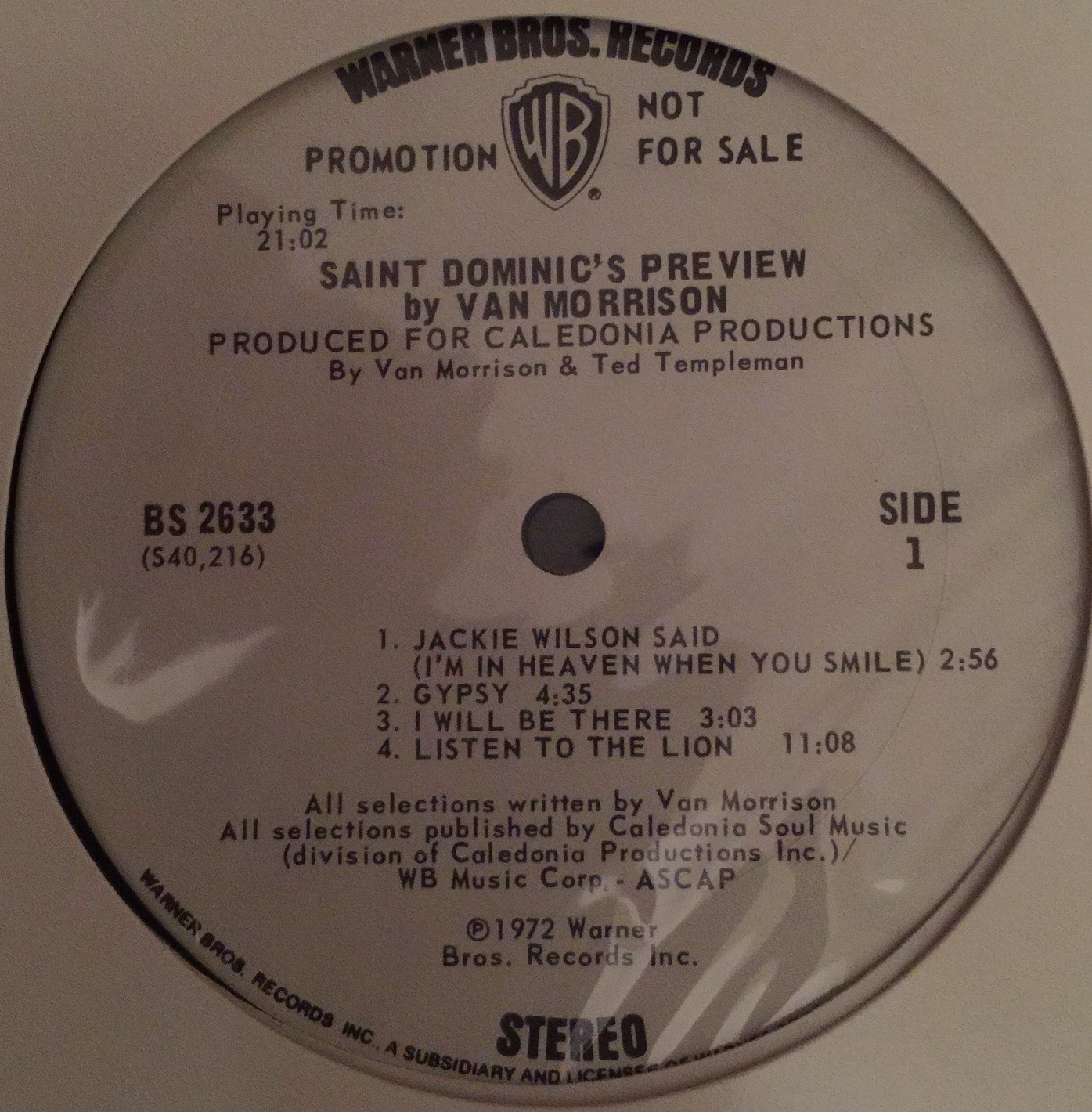 I find some of the other tracks to be more spacey and ethereal: “Listen to the Lion” and “Almost Independence Day” are not cut from the same cloth as the first three tracks; I’ve come to appreciate how Van reaches down into his gut on “Independence Day”, but “Lion” still loses me. It’s ok, because it is such a great album. (And a good sounding one too, Templeman at the helm on this one too). I have several copies, including some ubiquituous reissue from a decade ago that sounds pretty sterile, an old green label or two, and a WLP that I bought a few years ago that looked like it had only been handled by an archivist with white gloves. That’s my go-to copy these days.

Now, to Astral Weeks. I’ve come to “get” it; I don’t think I could have appreciated this album as a youngster. But it has grown on me over the years. I don’t listen to it often, but when I do, I’m fully engaged. I tracked down an early W7 pressing, which is pretty desirable, but you could probably live with an early green label at far less cost. 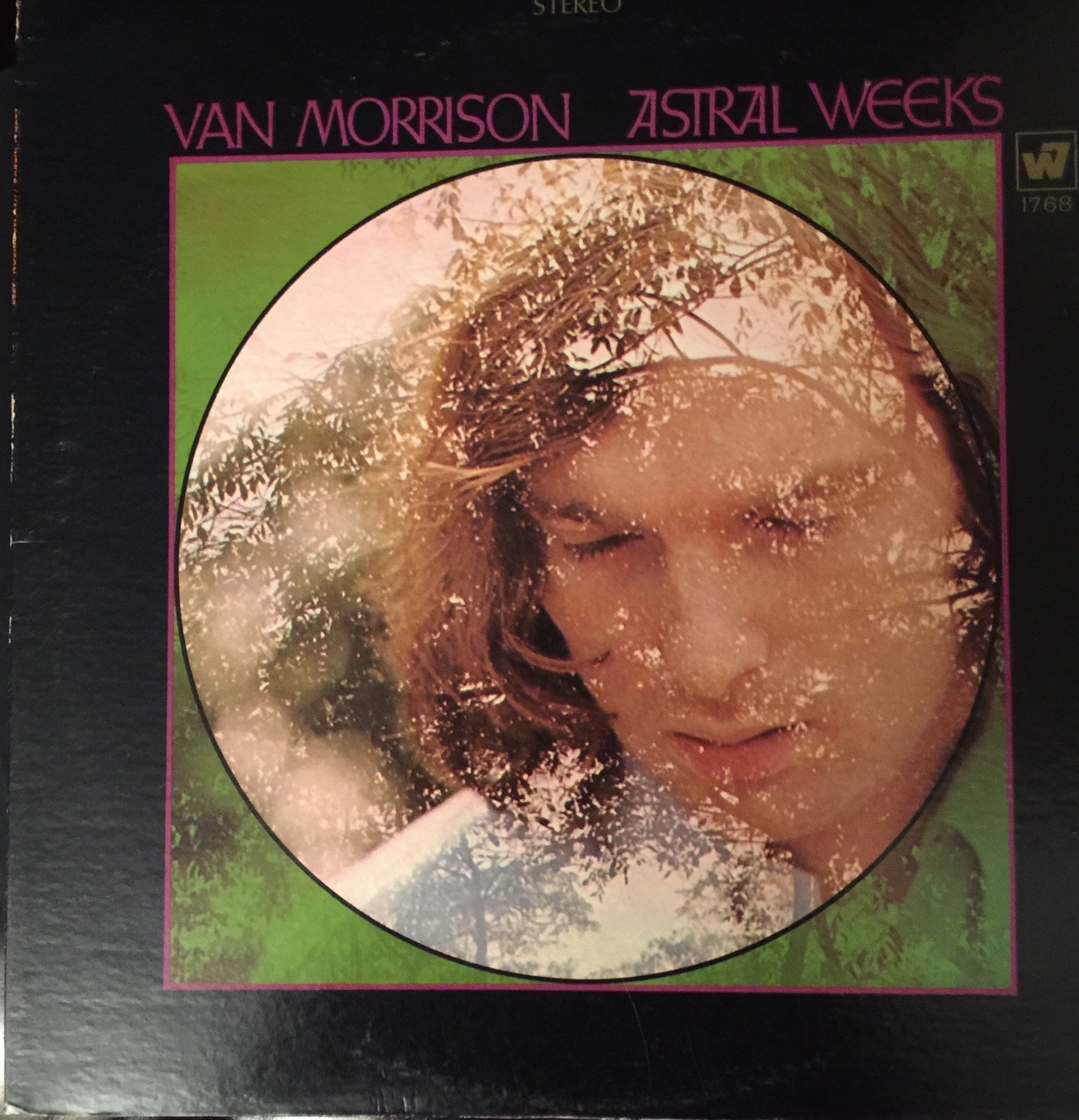 I did buy a few more Van Morrison albums after this era, including Hardnose the Highway, A Period of Transition, Avalon Sunset and perhaps a few others. But the early records described in more detail above capture, for me, what Van Morrison is all about. I think part of this is the listener’s “point of entry.” The above-described albums from the early 70’s were the ones I listened to repeatedly in my youth and I know them well. Someone who comes to Van Morrison’s work at a later stage of his career may take a different view.

Although I don't have all the details yet, I have learned that Frederiksberg Records, a small, eclectic label from New York, is in the process of reissuing the hard to find (and even harder to pay for) jazz obscurity, Milt Ward and Virgo Spectrum. You can find out more by keeping tabs on Frederiksberg's Bandcamp page, https://frederiksbergrecords.bandcamp.com   I'm told there is a bootleg out there so be careful. Frederiksberg is doing this project with the participation of the family of Milt Ward, which is to be applauded. Hopefully, this will give more access to a great jazz record at a reasonable price. The Roots album reissue from Frederiksberg (which is sold out on vinyl on the Frederiksberg Records bandcamp site) still appears to be available through some online retailers as a pre-order, so that's another one to jump on now if you can find it-- the original is extremely pricey and … END_OF_DOCUMENT_TOKEN_TO_BE_REPLACED

Clem Snide- Forever Just Beyond With a name derived from a character in the same literary work as the band name so famously identified with the Walter Becker-Donald Fagen duo, Clem Snide has an extensive discography, typically cataloged as “alt country.” This latest release is the work of one of its founding members, Eef Barzelay, who was responsible for much of the songwriting and singing. According to his bio, Barzelay suffered some serious bumps in the road during the last decade, including a failing marriage and financial ruin. At the same time, he learned that Scott Avett was a fan and they found inspiration in each other, leading to this album- a collaboration of artistry where Avett and Barzelay share some writing credits and Avett produces. The result is a fresh, upbeat set of tunes that are appealing in their simplicity and refreshing in their sincerity. The band is first tier … END_OF_DOCUMENT_TOKEN_TO_BE_REPLACED

Muriel Grossmann- Reverence Muriel Grossmann continues her quest for musical ascension on Reverence, which was released on vinyl in early December, 2019 on the RR Gems label as a 2 LP set. The compositions are Grossmann’s, and the band is much the same as the group of seasoned musicians with whom she has worked for some time (and detailed in the review of her Golden Rule), but for one notable exception: the addition of a keyboard player who brings that rich, woody Hammond B-3 sound to a series of compositions devoted to Africa. In some ways, Ms. Grossmann’s exploration of the roots of jazz deliberately eschews any superficial attempt to make African music. Instead, she draws inspiration from its influences, which are wide ranging and deep—you can hear rhythm and blues sounds mixed with more traditional African instrumentation and polyrhythms and come away with something that is both … END_OF_DOCUMENT_TOKEN_TO_BE_REPLACED

Stylus Life- StylusTimer Stylus life is a recurring question in audio discussions. Some serious attention was devoted to the subject here, in Mike Bodell’s “The Finish Line for Your Phono Stylus.” That article examined the issue from a number of perspectives, including early studies, claims by cartridge manufacturers and real-life experiences by users. It also generated a long, interesting thread on the Steve Hoffman forum that is worthwhile to read. The Hoffman thread also generated an experiment by Ray Parkhurst who documented the wear of a new stylus under certain controlled conditions, which included a microscopic examination of the stylus at various time intervals over long hours of repeated play. See https://forums.stevehoffman.tv/threads/the-finish-line-for-your-phono-cartridge-stylus-wear-by-mike-bodell.842572/#post-21292730.   Whether you lean toward more optimistic … END_OF_DOCUMENT_TOKEN_TO_BE_REPLACED

Incoming! (More Interesting Records)  An "interesting record" to me offers something unexpected, whether it is a fresh take on a recognized genre, or something that opens a new way of experiencing instruments in combination. It does not have to be "strange" or challenging to listen to; in fact, I'm a sucker for a good melodic hook and enjoy technical prowess as much as anybody, but there has got to be something "more"-- an intangible that differentiates the record from the millions of others to which we all have access.   As mentioned in a recent editorial, a lot of records come in and not all get written up. It’s not an editorial decision or any reflection of the music or sonics; I only have so much time, and I tend not to write short blurbs, but longer (some may say ‘too long’) reviews. My “incoming” piles continue to grow as I publish. This series of short capsules is meant to … END_OF_DOCUMENT_TOKEN_TO_BE_REPLACED