home
You are here: Home / Stickies / A Sidebar: Black Sabbath on Vertigo 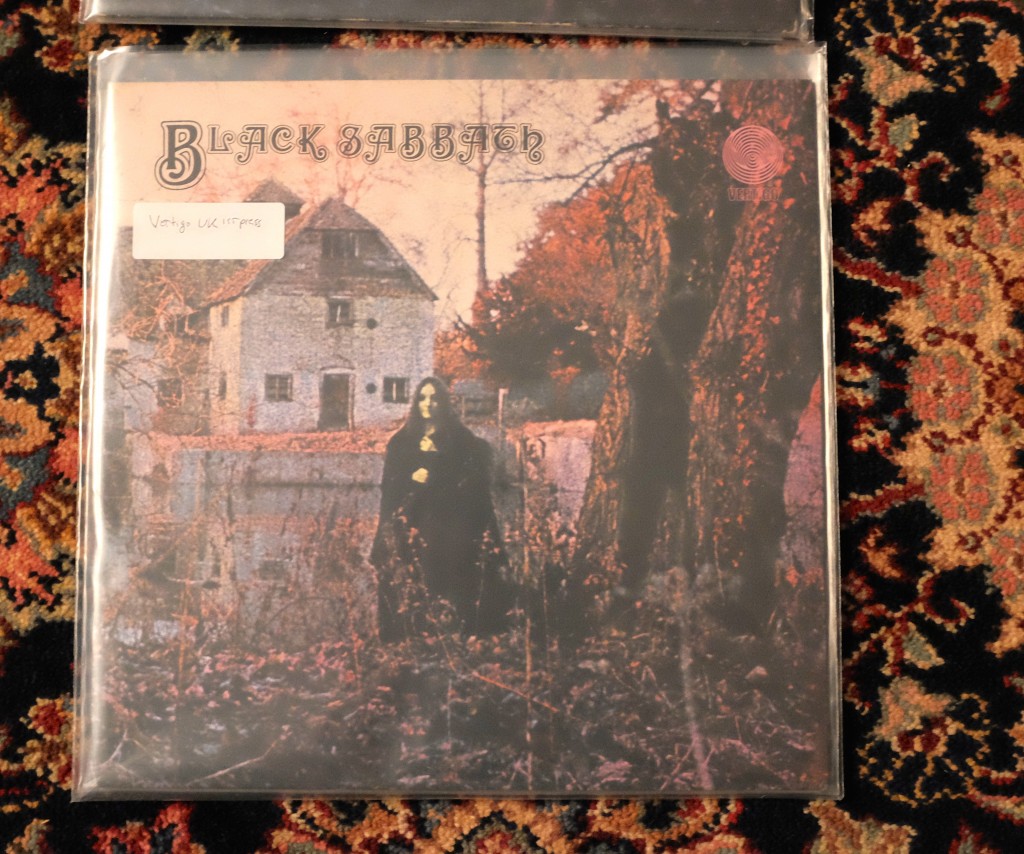 Any discussion of the Vertigo Swirl label would be incomplete without some mention of the early Black Sabbath albums since they are, from today’s vantage point, probably the best known band to have signed with the label and are often the entry point for many who are buying Vertigo Swirls today. Sabbath’s first four albums, including Paranoid and Master of Reality, were first issued on Vertigo in the UK and a number of other countries (but notably, not the United States, where the band had signed to Warner Bros.). 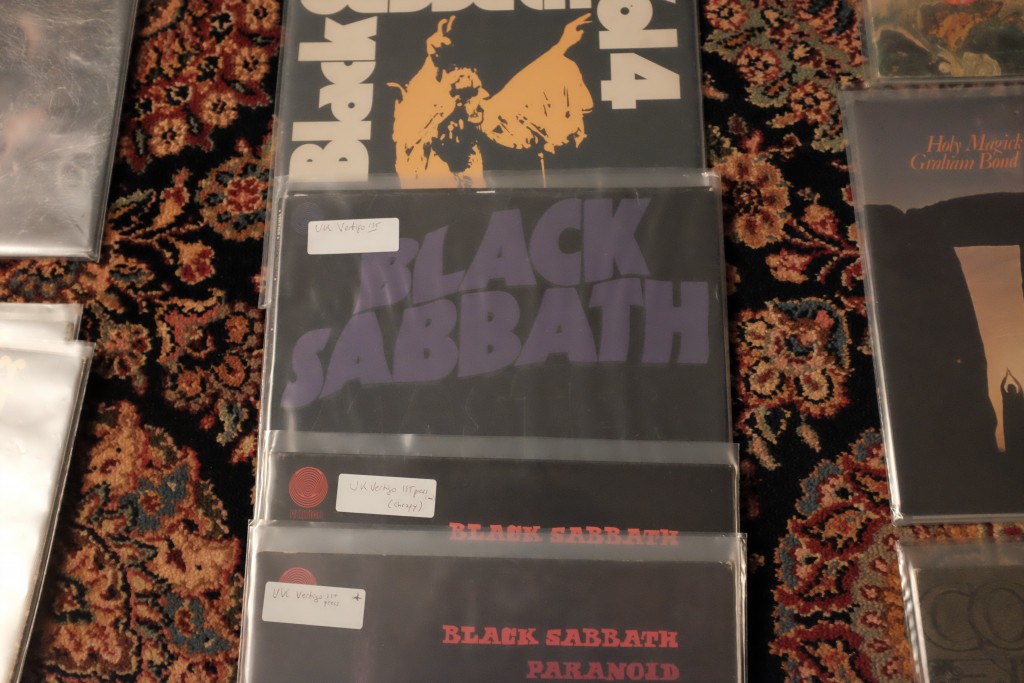 For those venturing into the sometimes deep waters of UK Vertigo Swirls today, these first four albums are a lure if only because the music is well-known; even though I was never a Sabbath fan at the time of their release, you couldn’t avoid hearing Paranoid at the time. Here’s my take, for what it is worth: the early UK Swirls definitely sound far better than any other version of the same records I have heard, including the original Warner U.S. pressings, and later pressings made in the UK and Europe. That said, the high frequencies on both Paranoid and Master of Reality sound a bit rolled off; what these albums do not lack is bass and punch. Given the music, which is heavy on power chords and driving riffs mixed with Ozzy’s distinctive vocals, the overall tonal balance of these records works.

In some ways, the first album, which was not, at least in the States, as widely played at the time as the follow up, Paranoid, is the most interesting as an historical artifact; the band was already exploring the satanic mythology it would build on, and made use of the flatted fifth (the so-called “Devil’s chord”) to good effect. The album art, for what it is worth, is probably the best of these four albums.

My suspicion is that more casual Black Sabbath listeners are more likely to be drawn to Paranoid and Master of Reality, both of which fetch real money these days on early UK Swirls. (MOR seems to be the more expensive of those two if it is accompanied by the original poster).

I have not compared the original UK Vertigos of these albums with all of the contemporaneously released Vertigos from other territories; I can say that in my experience with other Vertigo albums, the UKs tend to sound more immediate than their ex-UK brethren, and at least from a market/collector’s standpoint, the prices today reflect that. One well-known “shortcut” that can get you a taste of the UK Vertigo magic is the early WWA pressings of these albums from the UK that share the original Vertigo matrix numbers. Vol 4 was the last Sabbath album released in the UK on Vertigo; the band’s next album, Sabbath Bloody Sabbath, was released on the WWA label, and for a time, the back catalog was re-released on WWA using what appeared to be Vertigo metal parts. To go this route, you should verify the matrix numbers of any WWA copy. 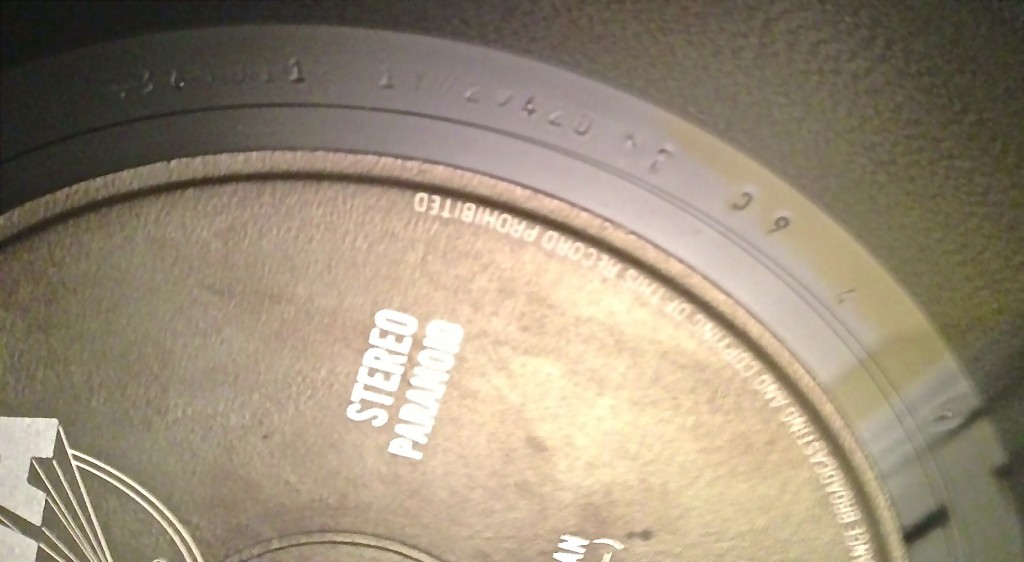 A comparison of one of these WWA copies with Vertigo stampers against a true UK Vertigo still puts the true Vertigo UK firmly ahead of the WWA sonically.

Overall,  Vol 4, to my ears, is the least well recorded of the first four albums- I have a UK first press Vertigo, a UK second press Vertigo and an old NEMs pressing from Holland that was issued in 1976. (Note, the current releases on the NEMs label are not the same as those from the mid-70’s).  While both Vertigos are better than the old NEMs reissue, it may not worth the hundreds of dollars difference in price to seek out the Vertigo unless Vol 4 is very high on your list of Black Sabbath records.

Here’s where I come out on these albums: if you really like the early Sabbath stuff and want to hear it at its best, these four albums are probably worth investing in as original UK Vertigo Swirls. If you are mildly intrigued, buy Paranoid or Master of Reality (sans poster will save you a considerable sum) on an early UK Swirl. Clean copies should sound pretty fabulous.  But, without trying to put a damper on things, there is far more to the original Swirl catalog than the Sabbath albums, and some of it is better recorded too. If you are ambivalent about Sabbath, but want to hear what the Swirls have to offer, go for the 1970 Annual instead.

ADDENDUM:  A contributor on the Hoffman fora took me to task for failing to note the Vertigo “Spaceship” label-briefly mentioned in my interview of Olav Wyper- as another alternative for these records. For the sake of completeness, it is a fair comment. As to price, it is my impression that the Spaceship-labelled Vertigo of Vol 4 is quite rare, and for that reason, commands a fairly high price, perhaps even higher than the ‘Swirls’ (it may be more collectible too, for those of that persuasion). The earlier Sabbath albums also were apparently released for a brief period on the Vertigo Spaceship label but, without knowledge of the quantities pressed, I cannot speak with any certainty as to how rare those are. What I do know is that Black Sabbath left Vertigo after Vol 4 was released in 1972 and went to WWA for their fifth album, Sabbath bloody Sabbath, released in 1973. During this transitional period, Vertigo also changed their label art from the emblematic “Swirl” to the “Spaceship” label; thus, there is a small window where Sabbath and the newer “Spaceship” art coincided.

Credit: VinylFan1973 for this “catch” with a kind word for Hoffmanite  moomaloo who noted that “Spaceship” Sabbaths may be more rare than the “Swirls’ (though the question of market price, at least on Vol 4, remains, for me, an open issue). Thanks to both. (And let me know if  any of you find a Spaceship Vol 4 in the current market on the cheap-I’m not buying, but would welcome the information).

Although I don't have all the details yet, I have learned that Frederiksberg Records, a small, eclectic label from New York, is in the process of reissuing the hard to find (and even harder to pay for) jazz obscurity, Milt Ward and Virgo Spectrum. You can find out more by keeping tabs on Frederiksberg's Bandcamp page, https://frederiksbergrecords.bandcamp.com   I'm told there is a bootleg out there so be careful. Frederiksberg is doing this project with the participation of the family of Milt Ward, which is to be applauded. Hopefully, this will give more access to a great jazz record at a reasonable price. The Roots album reissue from Frederiksberg (which is sold out on vinyl on the Frederiksberg Records bandcamp site) still appears to be available through some online retailers as a pre-order, so that's another one to jump on now if you can find it-- the original is extremely pricey and … END_OF_DOCUMENT_TOKEN_TO_BE_REPLACED

Clem Snide- Forever Just Beyond With a name derived from a character in the same literary work as the band name so famously identified with the Walter Becker-Donald Fagen duo, Clem Snide has an extensive discography, typically cataloged as “alt country.” This latest release is the work of one of its founding members, Eef Barzelay, who was responsible for much of the songwriting and singing. According to his bio, Barzelay suffered some serious bumps in the road during the last decade, including a failing marriage and financial ruin. At the same time, he learned that Scott Avett was a fan and they found inspiration in each other, leading to this album- a collaboration of artistry where Avett and Barzelay share some writing credits and Avett produces. The result is a fresh, upbeat set of tunes that are appealing in their simplicity and refreshing in their sincerity. The band is first tier … END_OF_DOCUMENT_TOKEN_TO_BE_REPLACED

Muriel Grossmann- Reverence Muriel Grossmann continues her quest for musical ascension on Reverence, which was released on vinyl in early December, 2019 on the RR Gems label as a 2 LP set. The compositions are Grossmann’s, and the band is much the same as the group of seasoned musicians with whom she has worked for some time (and detailed in the review of her Golden Rule), but for one notable exception: the addition of a keyboard player who brings that rich, woody Hammond B-3 sound to a series of compositions devoted to Africa. In some ways, Ms. Grossmann’s exploration of the roots of jazz deliberately eschews any superficial attempt to make African music. Instead, she draws inspiration from its influences, which are wide ranging and deep—you can hear rhythm and blues sounds mixed with more traditional African instrumentation and polyrhythms and come away with something that is both … END_OF_DOCUMENT_TOKEN_TO_BE_REPLACED

Stylus Life- StylusTimer Stylus life is a recurring question in audio discussions. Some serious attention was devoted to the subject here, in Mike Bodell’s “The Finish Line for Your Phono Stylus.” That article examined the issue from a number of perspectives, including early studies, claims by cartridge manufacturers and real-life experiences by users. It also generated a long, interesting thread on the Steve Hoffman forum that is worthwhile to read. The Hoffman thread also generated an experiment by Ray Parkhurst who documented the wear of a new stylus under certain controlled conditions, which included a microscopic examination of the stylus at various time intervals over long hours of repeated play. See https://forums.stevehoffman.tv/threads/the-finish-line-for-your-phono-cartridge-stylus-wear-by-mike-bodell.842572/#post-21292730.   Whether you lean toward more optimistic … END_OF_DOCUMENT_TOKEN_TO_BE_REPLACED

Incoming! (More Interesting Records)  An "interesting record" to me offers something unexpected, whether it is a fresh take on a recognized genre, or something that opens a new way of experiencing instruments in combination. It does not have to be "strange" or challenging to listen to; in fact, I'm a sucker for a good melodic hook and enjoy technical prowess as much as anybody, but there has got to be something "more"-- an intangible that differentiates the record from the millions of others to which we all have access.   As mentioned in a recent editorial, a lot of records come in and not all get written up. It’s not an editorial decision or any reflection of the music or sonics; I only have so much time, and I tend not to write short blurbs, but longer (some may say ‘too long’) reviews. My “incoming” piles continue to grow as I publish. This series of short capsules is meant to … END_OF_DOCUMENT_TOKEN_TO_BE_REPLACED