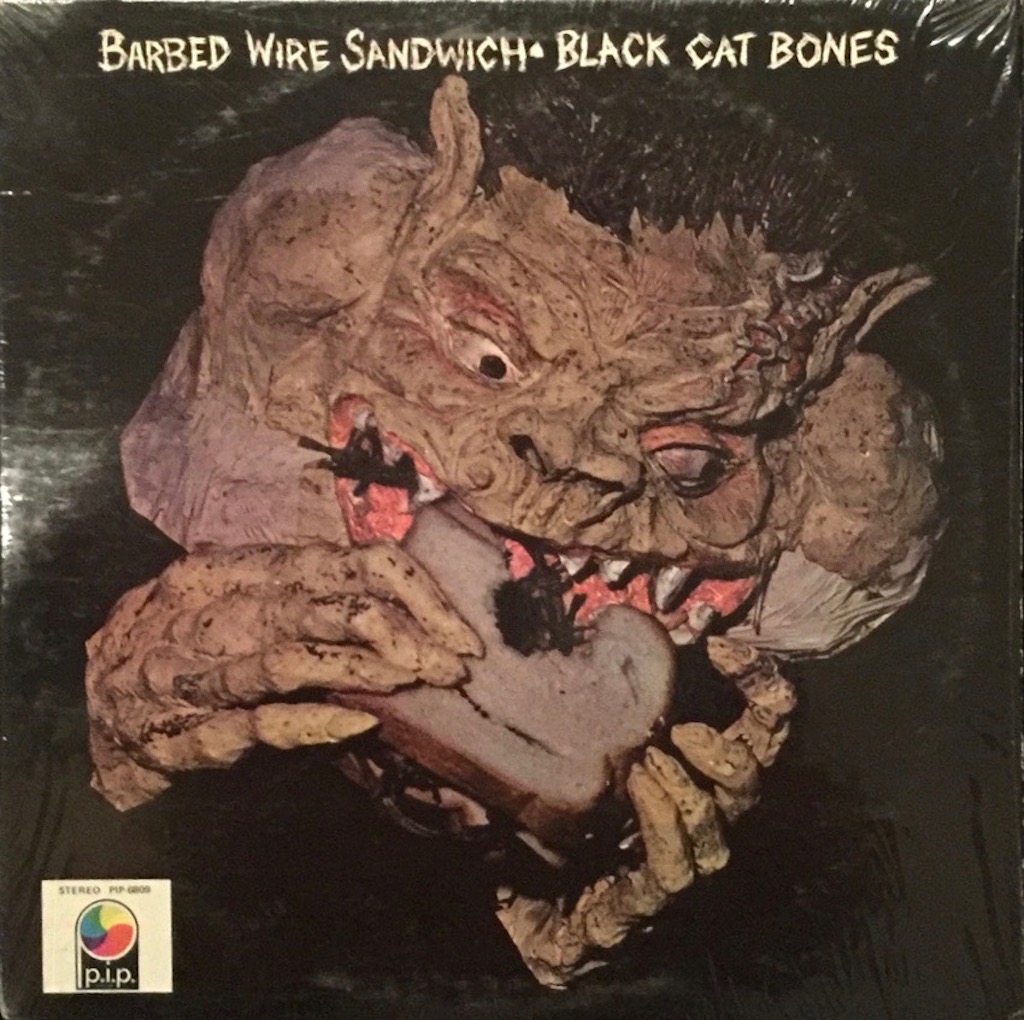 An important album by a short-lived band known for the association of various members with a number of other early heavy rock and blues rock bands, among them, Leaf Hound, Atomic Rooster, Cactus, Foghat and Free. Kossoff and Simon Kirke, of Free, left the band before this–– the band’s sole release––was recorded but a number of the tracks have same raw swagger and unpolished sound as Tons of Sobs, Free’s first album (and, to me, Free’s best).

Admittedly, there’s no Paul Rodgers here. But what is here is very, very good at times if hard rock blues is your thing. On this recording, the band consisted of Phil Lenoir, Rod Price, Brian Short and Stu Brooks (with Derek Brooks credited for rhythm guitar). 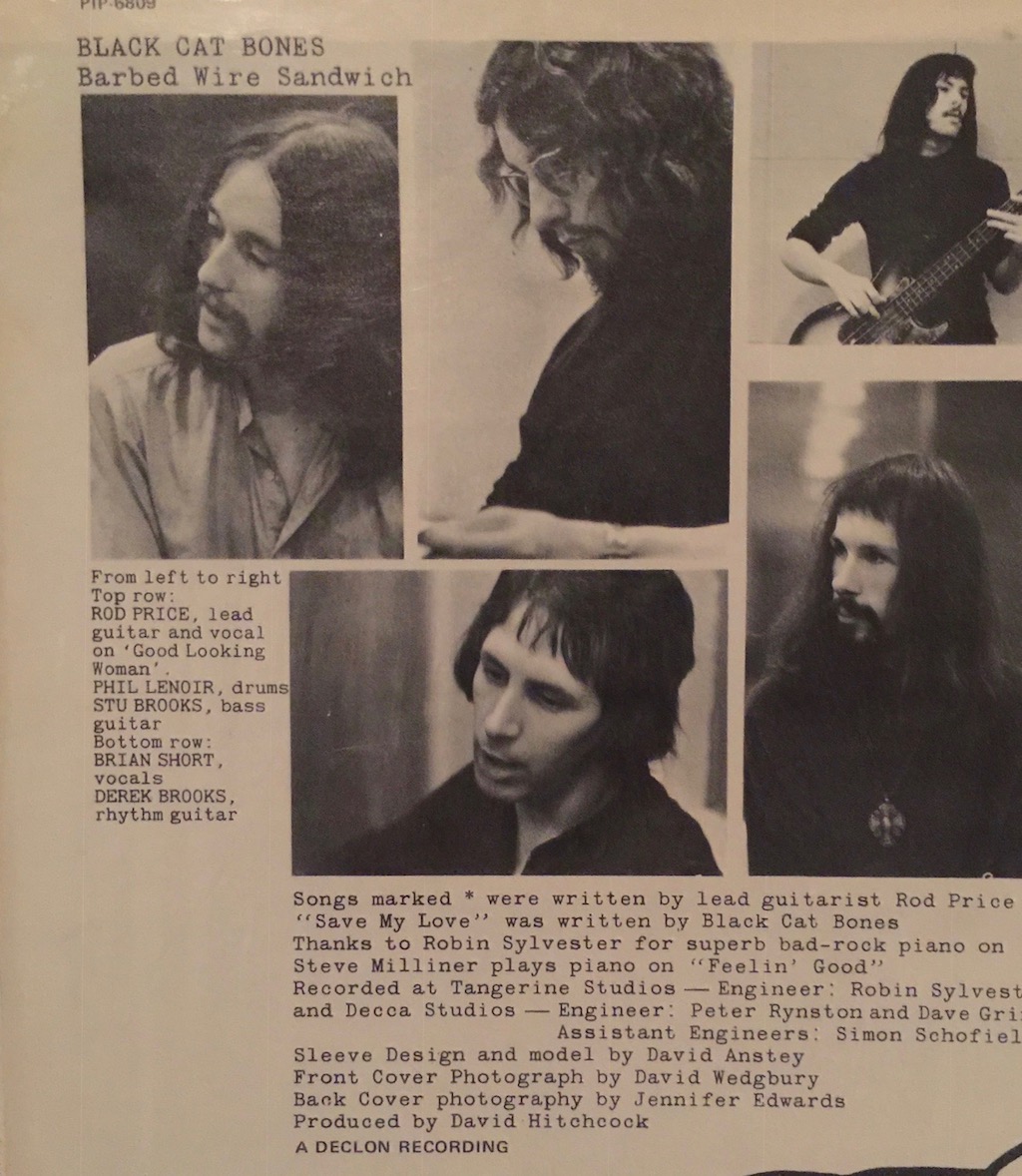 I bought the U.S. pressing on P.I.P., an imprint of Pickwick Records. Yes, the infamous budget label known for sound-a-like records and budget reissues; even as a kid I avoided Pickwick records. But, you don’t have a lot of choice here—the Decca pressing from the UK fetches about $500US for a clean copy and German Decca pressings are not far behind in price. There is a Japanese reissue from King circa 1976, which may be a decent alternative (some of the deep Italian prog was reissued by King in Japan offering good surfaces and a cost effective alternative to original pressings).

The Pickwick isn’t exactly cheap—figure close to $100 for a clean player these days. Is it worth it if you know you aren’t going to shell out for the Decca? The album is a mix of covers and songs penned by band member Rod Price, with one song credited to the band as a whole. Note that the track sequence on the US pressing is different than the UK record. 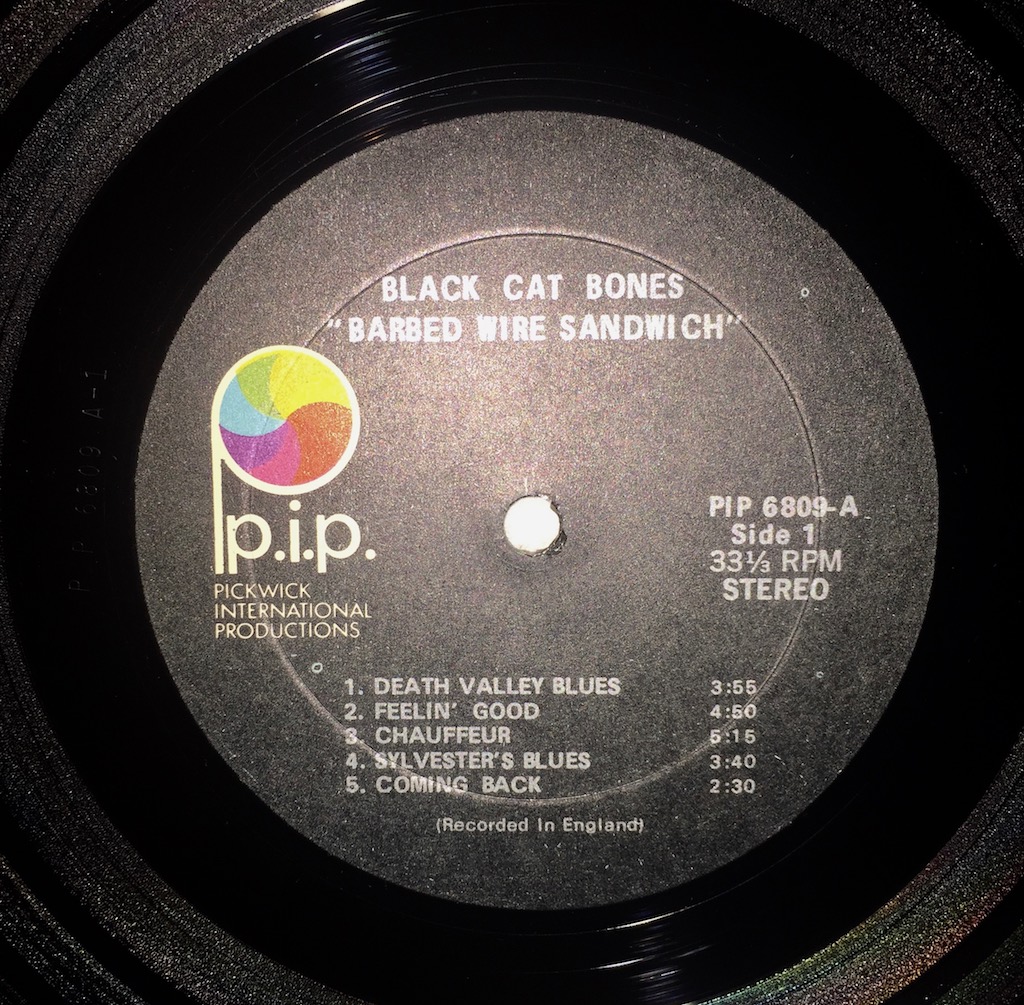 “Death Valley Blues”- first impressions of the sound are quite positive- the record seems quiet, no obvious sonic skew toward thinness, brightness or dullness. It is full-bodied, warm and the guitar licks burn and sing. Bass is good, and the lead vocal part isn’t lost in the mix. Classic heavy blues rock track.

“Feelin’ Good”- Unaccompanied voice at the outset, the record is quiet, shockingly so, given its age and the reputation of Pickwick as a budget label. Great tune––you know this one—after the first verse with some spare guitar, the bass and drums kick in. This is an enjoyable listen as the band winds up—guitars on double stops playing ye olde medieval ballad notes, until the lead breaks—that bitter lash, fading into acoustic backed vocal—this is an interesting mix of show biz blues meets hard rock. Well done.

“Chauffeur”- This is so characteristic of early Free–raw, swaggering, dirty, loud, with that slow grind—nice lead parts that aren’t overplayed. The vocals aren’t Paul Rodgers but that’s a pretty high bar—nice instrumental interplay with the vocals– drums and guitars almost as call and response, and we swing back to the main theme. (You’ll hear an amp humming toward the end, don’t worry, it isn’t yours).

“Sylvester’s Blues”—Vibes from the country- I guess an homage to the Delta was considered necessary, but it soon cranks up to a fast paced boogie—loud, brash, nice slide guitar work as call and response. The lead guitar is stinging. The vocal part is more shouting than singing—but it’s like a roadhouse song. To me, it isn’t the strongest track on the album but if this is the weakest track, the album, overall, holds up.

“Coming Back”—Another boogie. I’m not sure if it is the band or the style, but I’ve heard this before, done better. The lead guitar, beautifully wrapped around the song, is probably the most compelling aspect of the song. I’m just not as taken with the vocals and the style of song since I don’t think it shows this band at their best. 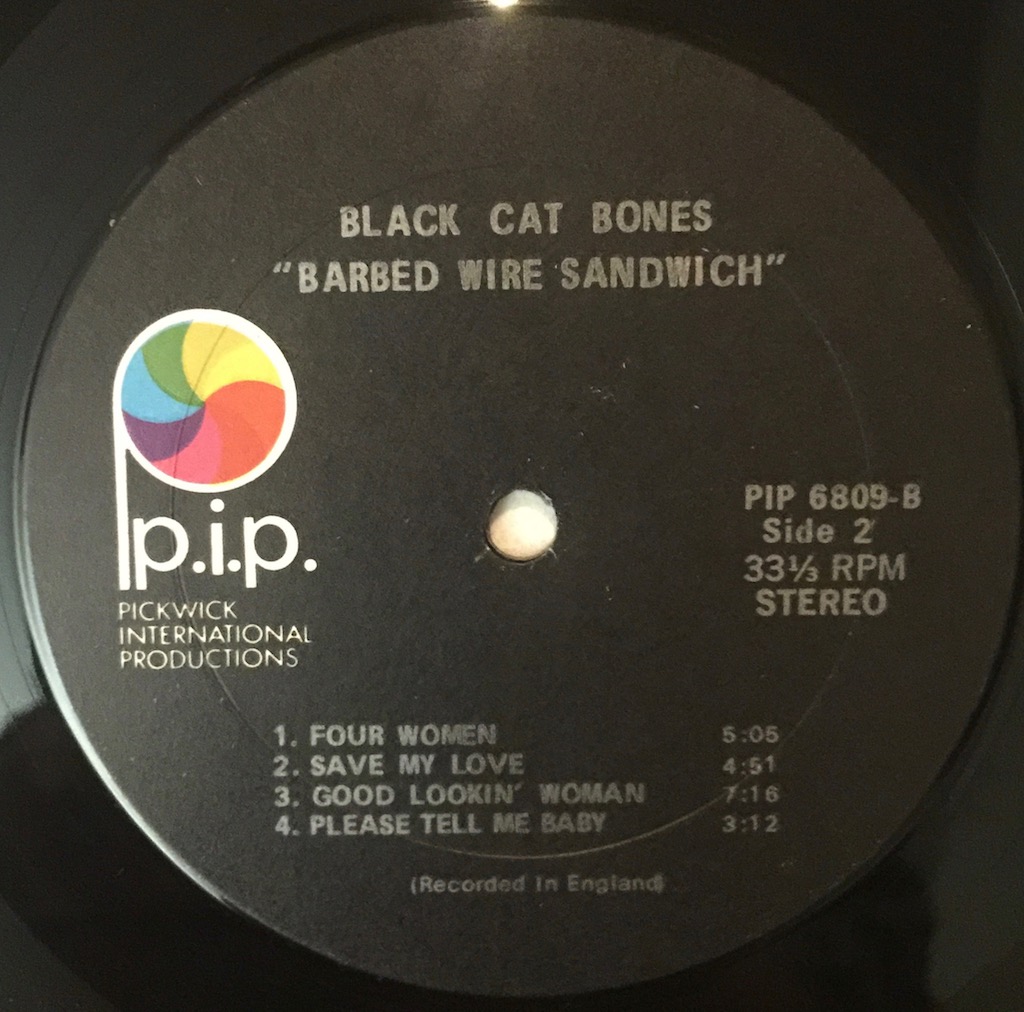 “Four Women”- Soft cymbal roll brings us in on a minor key, lead vocal against struck percussive sounds. This is a beautiful song- Nina Simone wrote it—and it works really well here. My side 2 is a little noisier than side 1, sadly. Toward the end the band gets louder, as does the vocal part, with more power, bigger and grander. One of the more interesting tracks on the album, although not in character with the style of the rest of the album.

“Save My Love”- This song is credited to the band as a whole and is another driving, swaggering hard rock blues number. It works—the guitar parts are very good, and grow better as the song progresses. The solo bass guitar is great toward the end, as the band comes thrashing back in to finish it.

“Good Lookin’ Woman”- Guitar and vocals track each other—the song takes a minute to light up—and it’s the guitar that makes it happen. No new ground broken here, but the interlude where the guitars take center stage is nice—and the band brings it on home in a solid, if not entirely unpredictable, way.

“Please Tell Me Baby”- fast, rollickin’ rock ‘n’ blues, echo on the vocals, muted tone on the lead guitar- this is a dirty sounding track but I like it. The up-tempo beat and plinking piano gives it a juke joint quality. Some distortion on this copy, no doubt due to kludgey record players of the past. [1]

The sound is quite heavy at times, transcending the blues and psych elements to take it into new territory, but the album is not consistent in that respect. It still stands on its own merit, with some very strong moments that make it worthwhile, even if it isn’t a “must have” record. I was actually surprised at how decent this US pressing sounded. I wouldn’t be surprised if the Decca beats it hands down on sonics, but this record is simply not worth the $500 price of admission to me for the UK pressing. On that note, have you priced early UK Island pink labels of Tons of Sobs or a UK copy Leaf Hound’s Growers of Mushroom[2]lately?

[1]Here is where multi-step repeated cleanings can sometimes make a difference, but I’m never optimistic. We’ll see how much of this cleans up beyond the initial, mild cleaning I did on the Monks with a single pass through the KL ultrasonic. (I didn’t do an agitated soak with AIVS #15 or repeated cleanings).

There Is No “Magic Bullet” in Hi-Fi No Magic Solutions I’ve spent some time on the audio chat fora over the years. Many popular threads these days are devoted to cheap improvements that can be made using audiophile “tweaks” or repurposed non-audiophile products. These can be applied to isolate gear, enhance the signals or connections or otherwise address some perceived problem that, once solved, offers to raise the level of music reproduction. It’s like a cheap solution to upgrade your system: from audiophile fuses, special wires (beyond simply having a high-quality interconnect, speaker wire or power cable) and other tweaks, to contact fluids and other things that you can attach to power sources, equipment, or place in the room (bowls, various harmonizers or active resonators, noise harvesters, etc.) This is apart from room treatment, which is sui generis; that is, every situation is … END_OF_DOCUMENT_TOKEN_TO_BE_REPLACED

Milt Ward Reissue-release date May 6, 2022  Andreas Vingaard, of Frederiksberg Records, dropped me a note that the Milt Ward & Virgo Spectrum record about which much has been written here will be available on vinyl beginning on May 9, 2022. However, several promo emails today, Friday, May 6, 2022 say the record is available NOW via Bandcamp (see link below). The reissue was done with the participation of Milt Ward’s family and includes comprehensive notes in a booklet. Given the price of original pressings, this should be worthwhile even if not taken from the master tape. I plan to get a copy and we’ll do a shoot-out with my “OG” pressing. I’m sure some of you are willing to brook a little sonic compromise to get access to an otherwise very hard to find, expensive spiritual jazz rarity. At the time of this writing there is one copy on Discogs in NM condition for media for over … END_OF_DOCUMENT_TOKEN_TO_BE_REPLACED

Although I don't have all the details yet, I have learned that Frederiksberg Records, a small, eclectic label from New York, is in the process of reissuing the hard to find (and even harder to pay for) jazz obscurity, Milt Ward and Virgo Spectrum. You can find out more by keeping tabs on Frederiksberg's Bandcamp page, https://frederiksbergrecords.bandcamp.com   I'm told there is a bootleg out there so be careful. Frederiksberg is doing this project with the participation of the family of Milt Ward, which is to be applauded. Hopefully, this will give more access to a great jazz record at a reasonable price. The Roots album reissue from Frederiksberg (which is sold out on vinyl on the Frederiksberg Records bandcamp site) still appears to be available through some online retailers as a pre-order, so that's another one to jump on now if you can find it-- the original is extremely pricey and … END_OF_DOCUMENT_TOKEN_TO_BE_REPLACED

Clem Snide- Forever Just Beyond With a name derived from a character in the same literary work as the band name so famously identified with the Walter Becker-Donald Fagen duo, Clem Snide has an extensive discography, typically cataloged as “alt country.” This latest release is the work of one of its founding members, Eef Barzelay, who was responsible for much of the songwriting and singing. According to his bio, Barzelay suffered some serious bumps in the road during the last decade, including a failing marriage and financial ruin. At the same time, he learned that Scott Avett was a fan and they found inspiration in each other, leading to this album- a collaboration of artistry where Avett and Barzelay share some writing credits and Avett produces. The result is a fresh, upbeat set of tunes that are appealing in their simplicity and refreshing in their sincerity. The band is first tier … END_OF_DOCUMENT_TOKEN_TO_BE_REPLACED

Muriel Grossmann- Reverence Muriel Grossmann continues her quest for musical ascension on Reverence, which was released on vinyl in early December, 2019 on the RR Gems label as a 2 LP set. The compositions are Grossmann’s, and the band is much the same as the group of seasoned musicians with whom she has worked for some time (and detailed in the review of her Golden Rule), but for one notable exception: the addition of a keyboard player who brings that rich, woody Hammond B-3 sound to a series of compositions devoted to Africa. In some ways, Ms. Grossmann’s exploration of the roots of jazz deliberately eschews any superficial attempt to make African music. Instead, she draws inspiration from its influences, which are wide ranging and deep—you can hear rhythm and blues sounds mixed with more traditional African instrumentation and polyrhythms and come away with something that is both … END_OF_DOCUMENT_TOKEN_TO_BE_REPLACED