home
You are here: Home / In Brief / Digging Deeper into Progressive Rock with Ken Golden 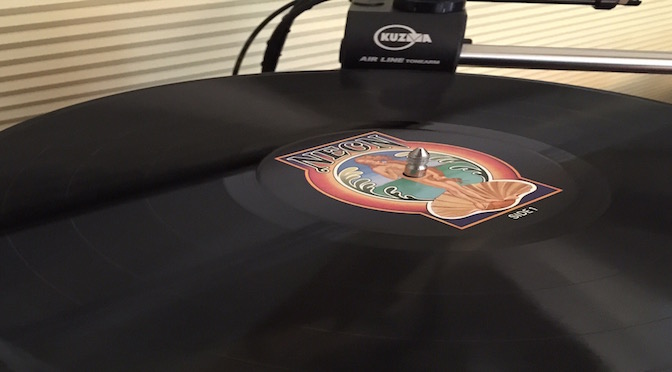 I am delighted to include a piece by Ken Golden, entitled “Prog Rock Obscurities” on some of the more obscure, but still accessible, masterpieces of “prog” rock. Ken has not only become my “go to” guy on matters “prog” but has an interesting history:

After years of crate digging and buying some of the most obscure (and ultimately valuable) period “progressive rock” records (when they were still obscure, but far cheaper), Ken launched a company, The Laser’s Edge, in 1987 to distribute digital copies of rare progressive rock recordings. That company is not only still in business today, but has expanded to embrace new issues (and reissues) on vinyl. Ken set up an in-house label in 1990 to reissue rare progressive and psychedelic rock albums, and did some “ultimate” records: classic bands like Spring, The Load, Faithful Breath, Secret Oyster. This business also expanded to include current bands in the genre, including: Riverside, White Willow, Indukti, and Eloy.

Not content to leave well enough alone, Ken launched a sister label in 1997- Sensory Records. This label focuses on current bands working with the broad scope of progressive metal. It has since become Ken’s most active label. Notable artists on the Sensory roster include Spiral Architect, Zero Hour, Gordian Knot, Delain, and Circus Maximus. According to Ken:

In 2001 a third label was spun off. Free Electric Sound is our fusion label. Woodenhead, Scott McGill/Michael Manring/Vic Stevens, and Mörglbl have helped revitalize a dormant genre. Then, in 2012 Modulus was born.  It presents reissues of rarities that we feel needs to find an audience.  This is a limited edition series presented in a “mini-LP” style tip-on sleeve that mimics the original LP design.

Ken, his distribution companies and labels are considered important resources throughout the world in the progressive rock genres. The VinylPress is pleased that Ken agreed to do a piece identifying some of these tasty morsels –not all of them are stratospheric in price and some can be found as reissues.
I suspect we’ve barely scratched the surface here. Most of us know the mainstream prog rock records, from bands like YES, ELP and others. For a long time, I regarded the genre as dated- some great music for its time, but the heavy on formalism and keyboards. But, I had missed a few things. First, there was a huge body of prog that simply eluded me: material from countries like Italy, Germany and eastern Europe. Further, the genre had continued to evolve, even after it was no longer “in fashion” in mainstream musical circles. This stuff didn’t get radio play, at least in the States, and was largely unknown except among the cognoscenti; much of this material represented a fresh “take” on the genre, following some unexplored paths of music.

Once Ken knew that I was an avid collector of Vertigo Swirls, I started to get messages from him–the constant being: “Do you own X?” In many cases, the answer was easy: “Huh?” Once I started to dig into some of the Italian and German records (as well as the more esoteric UK albums), it took  little convincing to jump on many of his recommendations. In some cases, the only impediment became price. So, Ken makes some recommendations for cheaper alternatives to the original pressings where possible.  As I try to keep pace with Ken’s recommendations and discover more on my own (though I have yet to catch Ken out on a record he is unfamiliar with), I will include additional reviews of some of my favorites. I already have a pretty big pile that I listen to frequently. Reviews of some are long overdue. In the meantime, enjoy Ken’s article.

Clem Snide- Forever Just Beyond With a name derived from a character in the same literary work as the band name so famously identified with the Walter Becker-Donald Fagen duo, Clem Snide has an extensive discography, typically cataloged as “alt country.” This latest release is the work of one of its founding members, Eef Barzelay, who was responsible for much of the songwriting and singing. According to his bio, Barzelay suffered some serious bumps in the road during the last decade, including a failing marriage and financial ruin. At the same time, he learned that Scott Avett was a fan and they found inspiration in each other, leading to this album- a collaboration of artistry where Avett and Barzelay share some writing credits and Avett produces. The result is a fresh, upbeat set of tunes that are appealing in their simplicity and refreshing in their sincerity. The band is first tier … END_OF_DOCUMENT_TOKEN_TO_BE_REPLACED

Muriel Grossmann- Reverence Muriel Grossmann continues her quest for musical ascension on Reverence, which was released on vinyl in early December, 2019 on the RR Gems label as a 2 LP set. The compositions are Grossmann’s, and the band is much the same as the group of seasoned musicians with whom she has worked for some time (and detailed in the review of her Golden Rule), but for one notable exception: the addition of a keyboard player who brings that rich, woody Hammond B-3 sound to a series of compositions devoted to Africa. In some ways, Ms. Grossmann’s exploration of the roots of jazz deliberately eschews any superficial attempt to make African music. Instead, she draws inspiration from its influences, which are wide ranging and deep—you can hear rhythm and blues sounds mixed with more traditional African instrumentation and polyrhythms and come away with something that is both … END_OF_DOCUMENT_TOKEN_TO_BE_REPLACED

Stylus Life- StylusTimer Stylus life is a recurring question in audio discussions. Some serious attention was devoted to the subject here, in Mike Bodell’s “The Finish Line for Your Phono Stylus.” That article examined the issue from a number of perspectives, including early studies, claims by cartridge manufacturers and real-life experiences by users. It also generated a long, interesting thread on the Steve Hoffman forum that is worthwhile to read. The Hoffman thread also generated an experiment by Ray Parkhurst who documented the wear of a new stylus under certain controlled conditions, which included a microscopic examination of the stylus at various time intervals over long hours of repeated play. See https://forums.stevehoffman.tv/threads/the-finish-line-for-your-phono-cartridge-stylus-wear-by-mike-bodell.842572/#post-21292730.   Whether you lean toward more optimistic … END_OF_DOCUMENT_TOKEN_TO_BE_REPLACED

Incoming! (More Interesting Records)  An "interesting record" to me offers something unexpected, whether it is a fresh take on a recognized genre, or something that opens a new way of experiencing instruments in combination. It does not have to be "strange" or challenging to listen to; in fact, I'm a sucker for a good melodic hook and enjoy technical prowess as much as anybody, but there has got to be something "more"-- an intangible that differentiates the record from the millions of others to which we all have access.   As mentioned in a recent editorial, a lot of records come in and not all get written up. It’s not an editorial decision or any reflection of the music or sonics; I only have so much time, and I tend not to write short blurbs, but longer (some may say ‘too long’) reviews. My “incoming” piles continue to grow as I publish. This series of short capsules is meant to … END_OF_DOCUMENT_TOKEN_TO_BE_REPLACED

More on Milt Ward and Virgo Spectrum Courtesy of Bill Pierce, the former Chair of Woodwinds at Berklee. Pierce worked with Milt Ward in the late ‘60s, including a stint as part of the horn section for Stevie Wonder. Pierce figures prominently on the album, Milt Ward and Virgo Spectrum; I have added his recollections to the feature article.   (Scroll down to the bottom of the article). My thanks to Bill Pierce, whose band, the Ralph Peterson Messenger Legacy, is currently active and touring.     … END_OF_DOCUMENT_TOKEN_TO_BE_REPLACED