home
You are here: Home / Features / DRIFTGLASS by Seed Ensemble

There is something very special about Driftglass by Seed Ensemble. For starters, it’s a hell of a lot of fun to listen to; when did you last experience that?  The album and ensemble are the brainchild of Cassie Kinoshi, a gifted performer, composer and arranger who leads a big band with a big sound and an eclectic, and sometimes unexpected, array of influences. What starts as a thrumming bass solo soon morphs into a stage full of instruments that mixes the avant-garde with something that resembles a James Bond film theme from the ‘60s—it’s cool stuff, from the tuba solo to the staged horn section blaring those “moment of danger” signals that put you on the edge of your seat. The line-up consists of eleven instrumentalists, including a lot of horns, two keyboard players, double bass and drums plus guest vocalist. 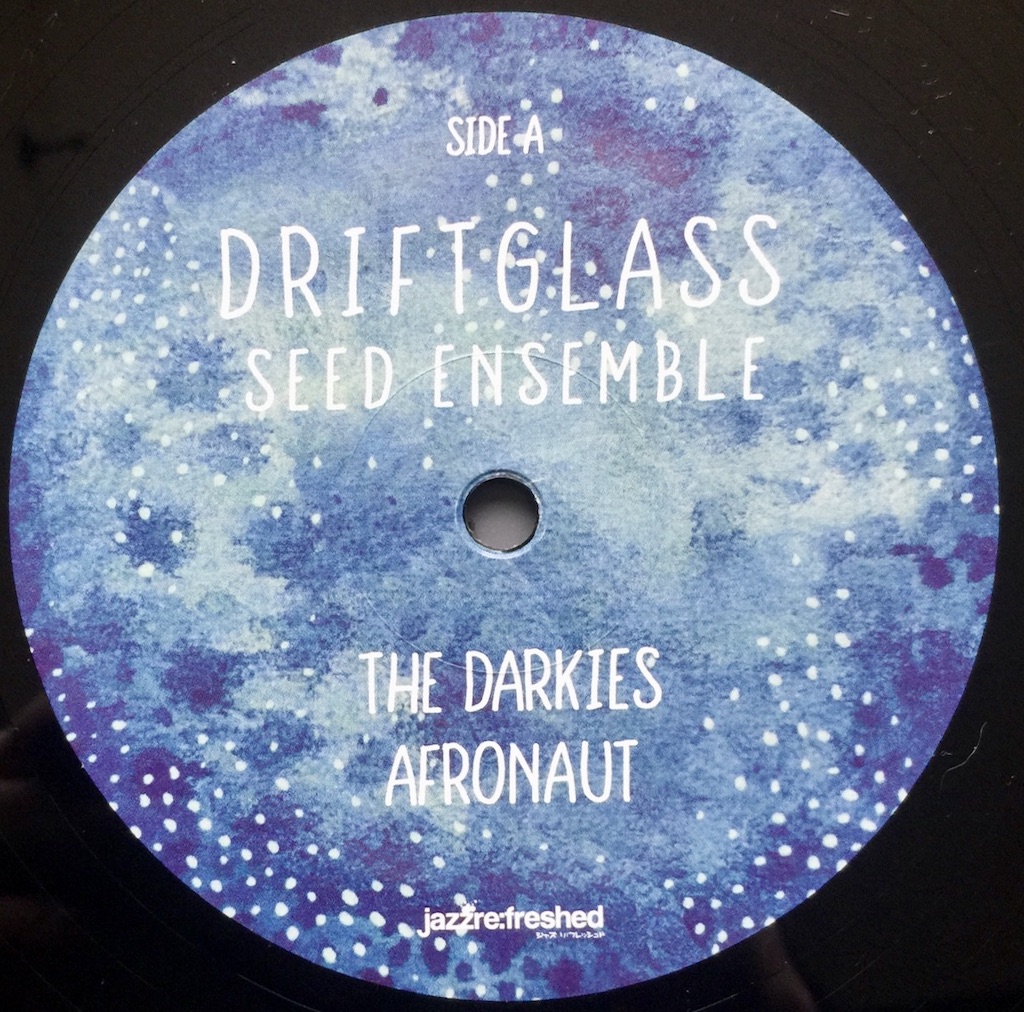 That first number described above, “The Darkies” is so good, you really can’t expect more, but Cassie and crew somehow deliver it: “Afronaut,” featuring XANA, with spoken word/rap/poetry. It’s like an advanced course in improvisational jazz, except these folks aren’t improvising; it’s extremely well composed, arranged and produced without sounding slick. The horn parts wail against a solid foundation laid down by the other horns and the rhythm section. The recording is superb—you get to hear everything very clearly without a trace of sibilance or stridency. A nice bit of Rhodes (god, I love that instrument, nothing touches it for sheer funk) intrudes, played by Sarah Tandy and blends perfectly back into the ensemble after some bluesy funk that gives you all of the instrument’s chime-y goodness. XANA was not on my radar, but she’s got the beat, and with a trace of British accented attitude, her voice floats above all of it while the drums snap and crack. Some real fancy stick work there. 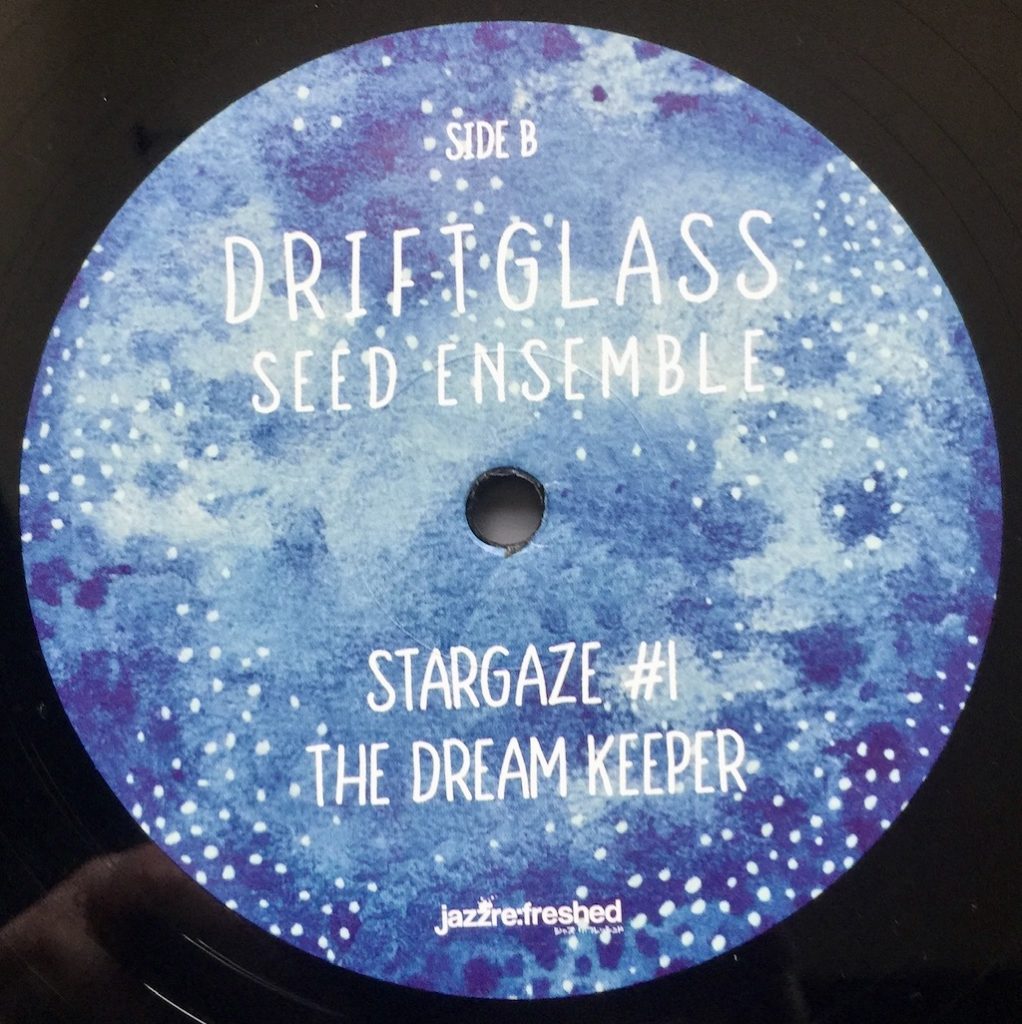 “Stargaze #1 KATIN” is an interlude, a bit of instrumental palate cleansing that is not filler, but a more studied piece –jazzy guitar licks delivered to the steady clip-clop of those drums.

“The Dream Keeper” is a stunning and unexpected change to a female vocal centered piece with a change up to a fast horn part that ascends and descends—those trumpet players –Miguel Gorodi and Sheila Maurice–  earn their keep. The piano is wonderful too, with all the heft that instrument can muster, eloquently played by Joe Armon-Jones. The lyrics, by Langston Hughes, just lilt in the voicing of the piece. 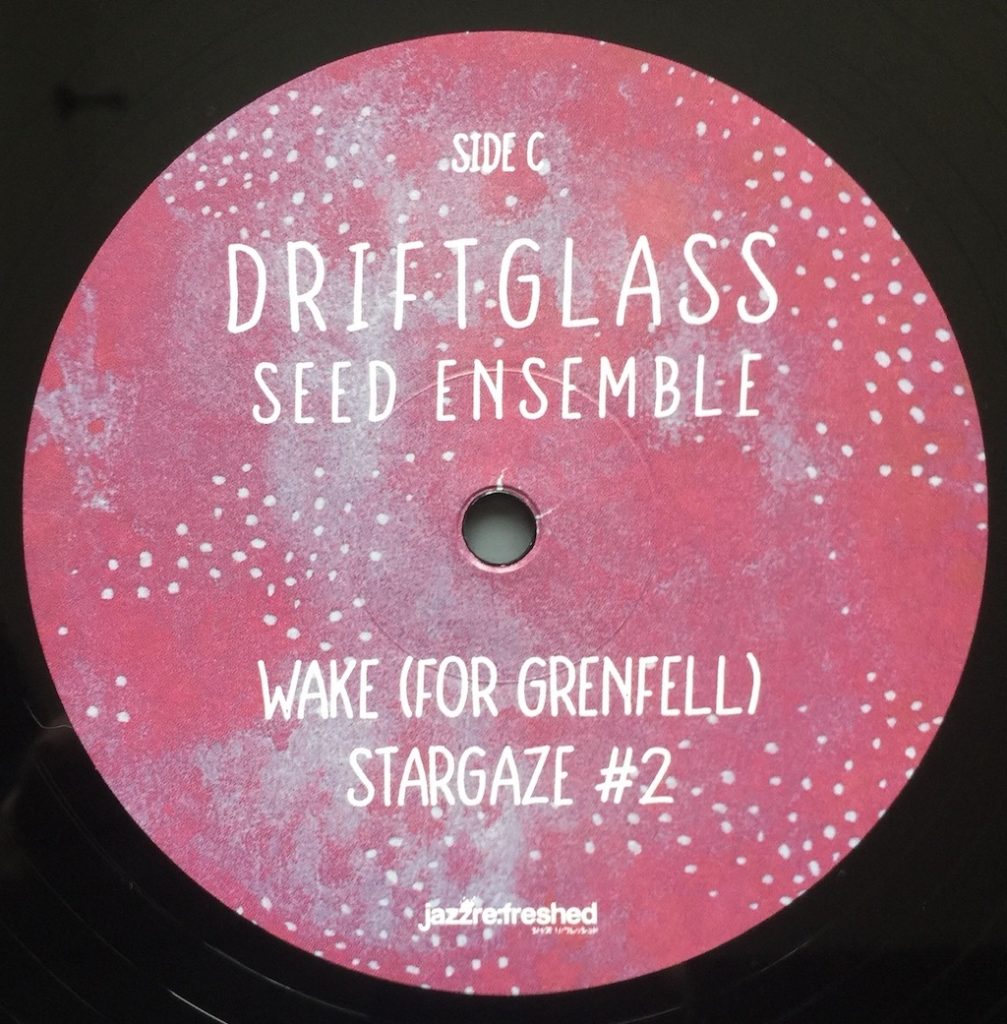 “WAKE (for Grenfell)” starts with a clap/stomp group voiced chant that is soon accompanied by the band and Ms. Adams-Burnett turning in a performance that’s part jazz, part blues and all soul. Her voice winds in and out of the horns, moans and rises above, at one point scat singing as a soprano backed by those chanting voices; the piano keeps pace here. When the horns take off in earnest, we are deep into the song, and fully immersed in this world of deep bass, massed voices and some pretty intense drum work that gels into a driving riff. The trombone work, by Joe Bristow, sounds like he wrote the textbook—stunning, virtuoso level stuff that meshes perfectly with all that is going on behind him.

When Cassie enters, it’s a dream part made for that sax, wailing, full throated, modulated high-low notes, trills, and something that is neither predictable nor dissonant. It’s one of those sax parts that fully satisfies but leaves you wanting more.  She hits some minor keys as she winds it up, higher, harder and reaches this crescendo— where suddenly, the vocals return to that sublime groove, a hip, slow paced thing where Adams-Burnett also doubles with high/low parts, and the horns help her bring it home. This thing swings.

I’m sometimes reminded of how important the big band sound was in the years before WWII and how out of fashion it became afterward, due to labor strikes in the States, changes in style and a determined stance to stay with the standards. We often associate big band with old time sound. We haven’t often heard what a modern big band can bring to the table and you don’t need fresh ears or an appreciation of music history to get it. It’s a big sound, with lots of contrast, nuances that cannot be pulled off (at least without a lot of overdubbing) and fully fleshed out. It is a wonderful thing to hear music that pushes beyond the standards of a lifetime ago using a large band like this—it is music for today that anybody could relate to and enjoy.

“Stargaze #2 LAU” is another interlude that simmers. 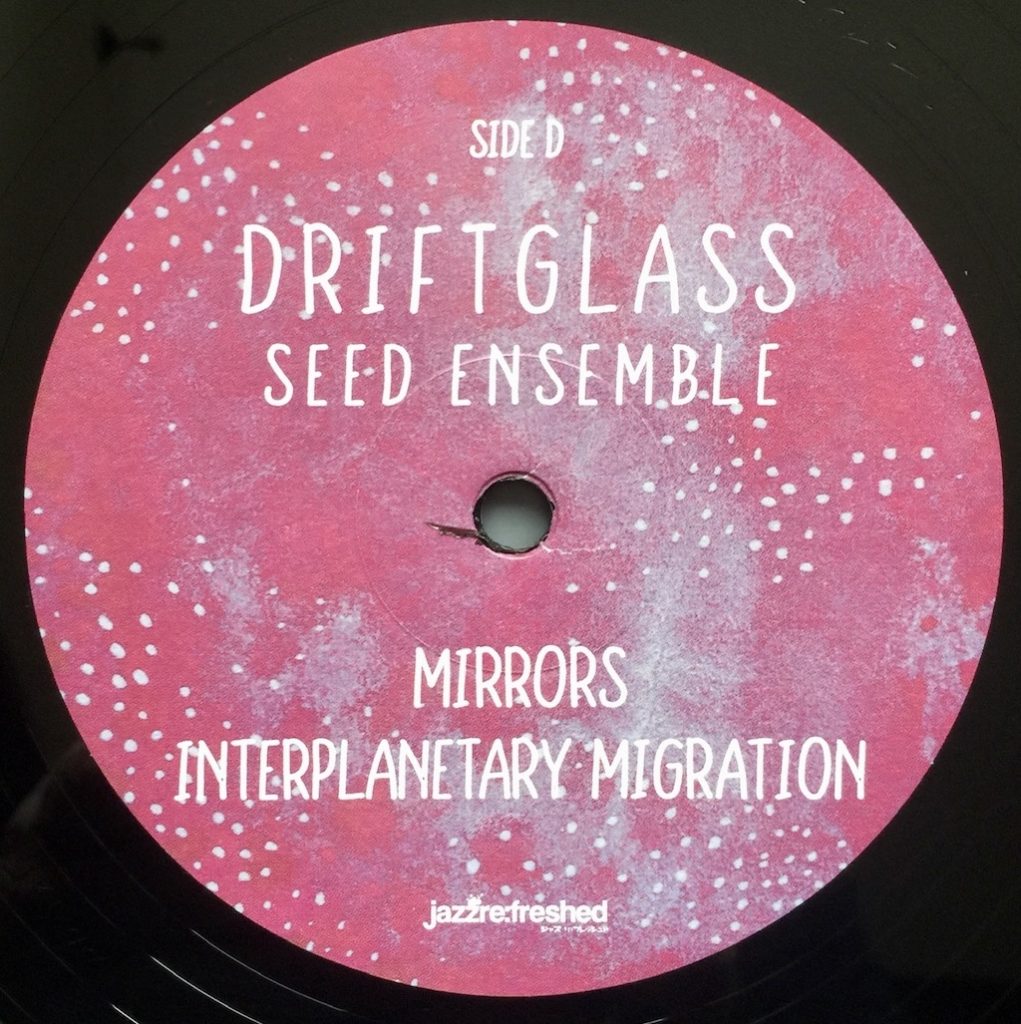 “Mirrors” starts with some arpeggiated guitar chords that quickly transition into a fast beat with flaring horns in unison—it’s an interesting study of interplay between jazz guitar and woodwinds, with some lovely sax riffs by Ms. Kinoshi, neat,clipped drum sounds and a big, full bodied sound that only a band of this size and prowess could deliver. There are moments when everybody is playing that do remind me of those big horn sections you used to hear on the big money movie soundtracks—granted, those things sound dated in many cases where this is fresh, hot and has a more modern sound. It’s not syrup, it’s spice, with lots of power and drive. When the piece slows down and gets simple at the end, with drums echoing, you are in demo record territory. Sound hounds take note.

The album wraps with “Interplanetary Migration,” a more complex, full throttled composition, with the horns front and center. Vocals are provided by Mr. Ekow, whose rapid-fire delivery mixes the vibe of hip-hop/rap with the warm, big-bodied sound of a large band at full tilt. Everybody gets into the act here, the horns are just sensational (was that an elephant I heard in the background?) as the piece mixes exoticism with a street beat, with the power only a big band can deliver. I bet some of old timers from Preservation Hall in NOLA could groove to this, even if it is more modern, angular and less traditional sounding.  There’s even a synth sound near the close that comes up in the mix, registering the astral aspect before it closes, with a beat and laughter.

This is a killer record. I was curious about Ms. Kinoshi, who has won awards and successfully straddled the jazz and theatre communities, as well as film and contemporary dance. She was an artist in residence as part of a program underwritten by legendary theatrical producer Cameron Mackintosh (Les Miserables, Phantom of the Opera, Miss Saigon, Cats and Hamilton, among many others); she has worked with the London Symphony Orchestra and has a list of credits that most musicians with a full career behind them would envy. And she’s young and still growing as an artist.  See http://www.cassiekinoshi.com/about

I could have written a review that consisted simply of the statement: “buy this record. You’ll thank me.” But that would have taken all the fun out of writing this. Listening to Driftglass by Seed Ensemble is way more fun than reading about it. Grab a copy and hear it for yourself.

There Is No “Magic Bullet” in Hi-Fi No Magic Solutions I’ve spent some time on the audio chat fora over the years. Many popular threads these days are devoted to cheap improvements that can be made using audiophile “tweaks” or repurposed non-audiophile products. These can be applied to isolate gear, enhance the signals or connections or otherwise address some perceived problem that, once solved, offers to raise the level of music reproduction. It’s like a cheap solution to upgrade your system: from audiophile fuses, special wires (beyond simply having a high-quality interconnect, speaker wire or power cable) and other tweaks, to contact fluids and other things that you can attach to power sources, equipment, or place in the room (bowls, various harmonizers or active resonators, noise harvesters, etc.) This is apart from room treatment, which is sui generis; that is, every situation is … END_OF_DOCUMENT_TOKEN_TO_BE_REPLACED

Milt Ward Reissue-release date May 6, 2022  Andreas Vingaard, of Frederiksberg Records, dropped me a note that the Milt Ward & Virgo Spectrum record about which much has been written here will be available on vinyl beginning on May 9, 2022. However, several promo emails today, Friday, May 6, 2022 say the record is available NOW via Bandcamp (see link below). The reissue was done with the participation of Milt Ward’s family and includes comprehensive notes in a booklet. Given the price of original pressings, this should be worthwhile even if not taken from the master tape. I plan to get a copy and we’ll do a shoot-out with my “OG” pressing. I’m sure some of you are willing to brook a little sonic compromise to get access to an otherwise very hard to find, expensive spiritual jazz rarity. At the time of this writing there is one copy on Discogs in NM condition for media for over … END_OF_DOCUMENT_TOKEN_TO_BE_REPLACED

Although I don't have all the details yet, I have learned that Frederiksberg Records, a small, eclectic label from New York, is in the process of reissuing the hard to find (and even harder to pay for) jazz obscurity, Milt Ward and Virgo Spectrum. You can find out more by keeping tabs on Frederiksberg's Bandcamp page, https://frederiksbergrecords.bandcamp.com   I'm told there is a bootleg out there so be careful. Frederiksberg is doing this project with the participation of the family of Milt Ward, which is to be applauded. Hopefully, this will give more access to a great jazz record at a reasonable price. The Roots album reissue from Frederiksberg (which is sold out on vinyl on the Frederiksberg Records bandcamp site) still appears to be available through some online retailers as a pre-order, so that's another one to jump on now if you can find it-- the original is extremely pricey and … END_OF_DOCUMENT_TOKEN_TO_BE_REPLACED

Clem Snide- Forever Just Beyond With a name derived from a character in the same literary work as the band name so famously identified with the Walter Becker-Donald Fagen duo, Clem Snide has an extensive discography, typically cataloged as “alt country.” This latest release is the work of one of its founding members, Eef Barzelay, who was responsible for much of the songwriting and singing. According to his bio, Barzelay suffered some serious bumps in the road during the last decade, including a failing marriage and financial ruin. At the same time, he learned that Scott Avett was a fan and they found inspiration in each other, leading to this album- a collaboration of artistry where Avett and Barzelay share some writing credits and Avett produces. The result is a fresh, upbeat set of tunes that are appealing in their simplicity and refreshing in their sincerity. The band is first tier … END_OF_DOCUMENT_TOKEN_TO_BE_REPLACED

Muriel Grossmann- Reverence Muriel Grossmann continues her quest for musical ascension on Reverence, which was released on vinyl in early December, 2019 on the RR Gems label as a 2 LP set. The compositions are Grossmann’s, and the band is much the same as the group of seasoned musicians with whom she has worked for some time (and detailed in the review of her Golden Rule), but for one notable exception: the addition of a keyboard player who brings that rich, woody Hammond B-3 sound to a series of compositions devoted to Africa. In some ways, Ms. Grossmann’s exploration of the roots of jazz deliberately eschews any superficial attempt to make African music. Instead, she draws inspiration from its influences, which are wide ranging and deep—you can hear rhythm and blues sounds mixed with more traditional African instrumentation and polyrhythms and come away with something that is both … END_OF_DOCUMENT_TOKEN_TO_BE_REPLACED