home
You are here: Home / Records / Gary Bartz and Maisha-Direct to Disc

Gary Bartz and Maisha-Direct to Disc 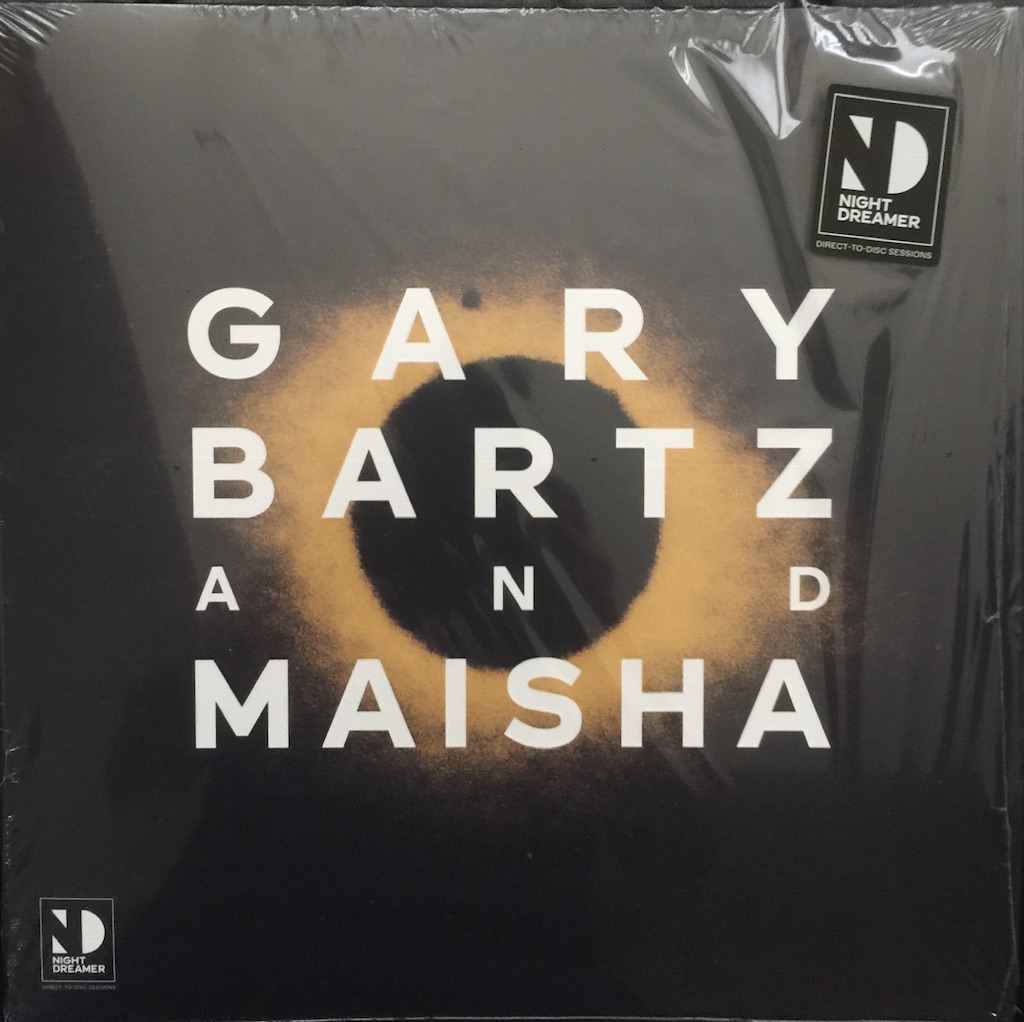 Gary Bartz and Maisha eloquently answer the question about the direction of modern jazz today.

Bartz is a heavyweight player whose credentials take us back to the roots of post-war modern jazz; the list of notables with whom he performed as a sideman is long and impressive, from Blakey and Miles to Eric Dolphy, Max Roach and McCoy Tyner. His album, Another Earth, with Strata-East co-founders Charles Tolliver and Stanley Cowell and the great Pharaoh Sanders, is a classic. Bartz has kept moving through the years, exploring jazz, funk and fusion. As I was warming up the system today, I was listening to Woody Shaw’s Blackstone Legacy, another album on which Bartz plays with an outstanding roster of cohorts.

Maisha is a relatively young UK-based “collective” led by drummer Jake Long. Their explorations into spiritual jazz were influenced by some of the very performers with whom Bartz collaborated over the years. The idea of combining these forces—one of the first-generation performers from the era of spiritual jazz with a modern group of interpreters– grew out of a shared performance on stage; the interaction between Bartz and this new generation of musicians invigorated all of the musicians and led to further touring and appearances. 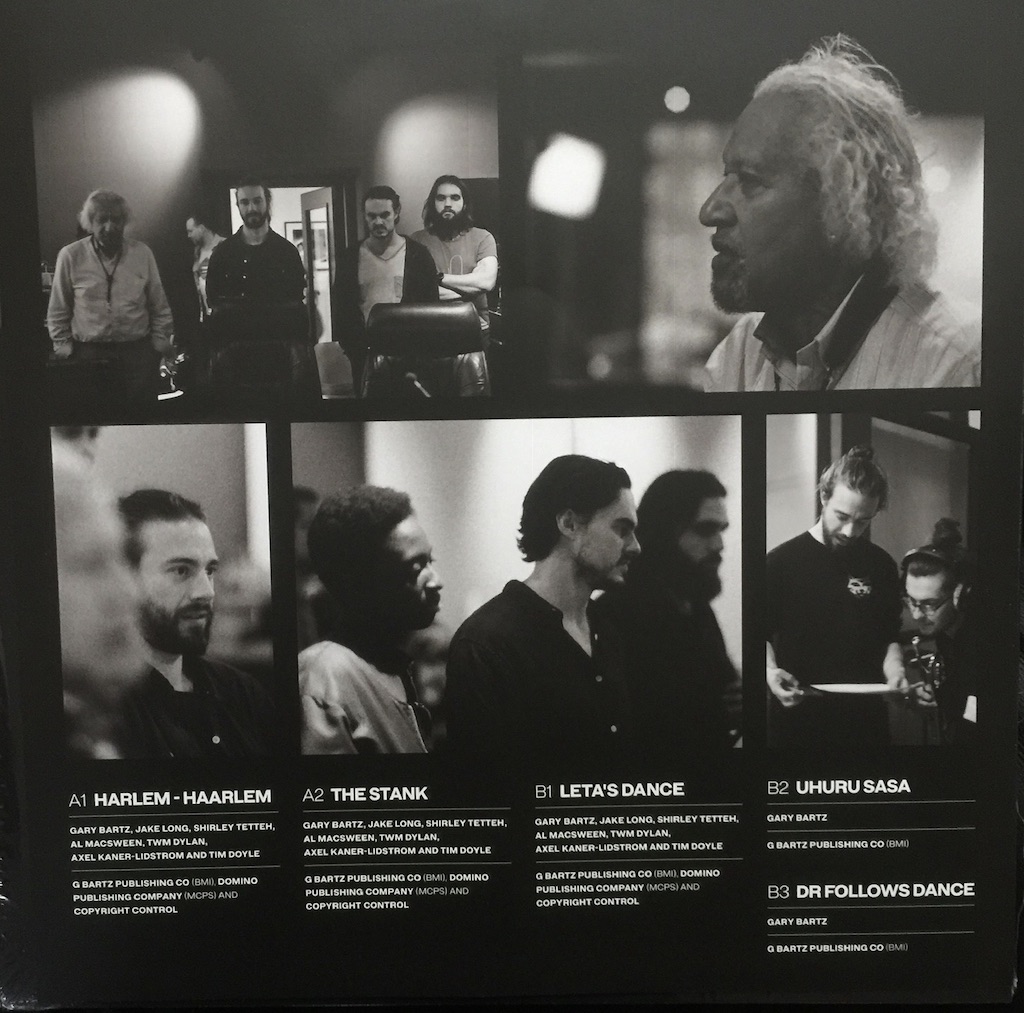 This album not only captures that magic but goes a step further—it is cut as a “direct to disc” album from two nights of performances in the Netherlands in late October 2019. For those without long memories, “direct to disc” was a proven way to increase the sonic performance of an LP by eliminating the normally critical step of “recording”; instead, the performance was cut to the acetate as it occurred, without a tape machine, leaving no room for mistakes, retakes and overdubs. The format was popular for a period in the audiophile community back in the late ‘70s, and was utilized by several labels, most notably, Sheffield, with the great Doug Sax mastering at the lathe. In most cases, the best that could be said about many of those releases was that they “sounded good.” The music was often “safe” and unadventurous and tended to the banal. I have shelves of these records that I acquired new at the time of their release, but rarely listen to any of them these days.

This one is different. It consists of five tracks, each emphasizing different faces of the music, from Afro beats to funk to soulful jazz: 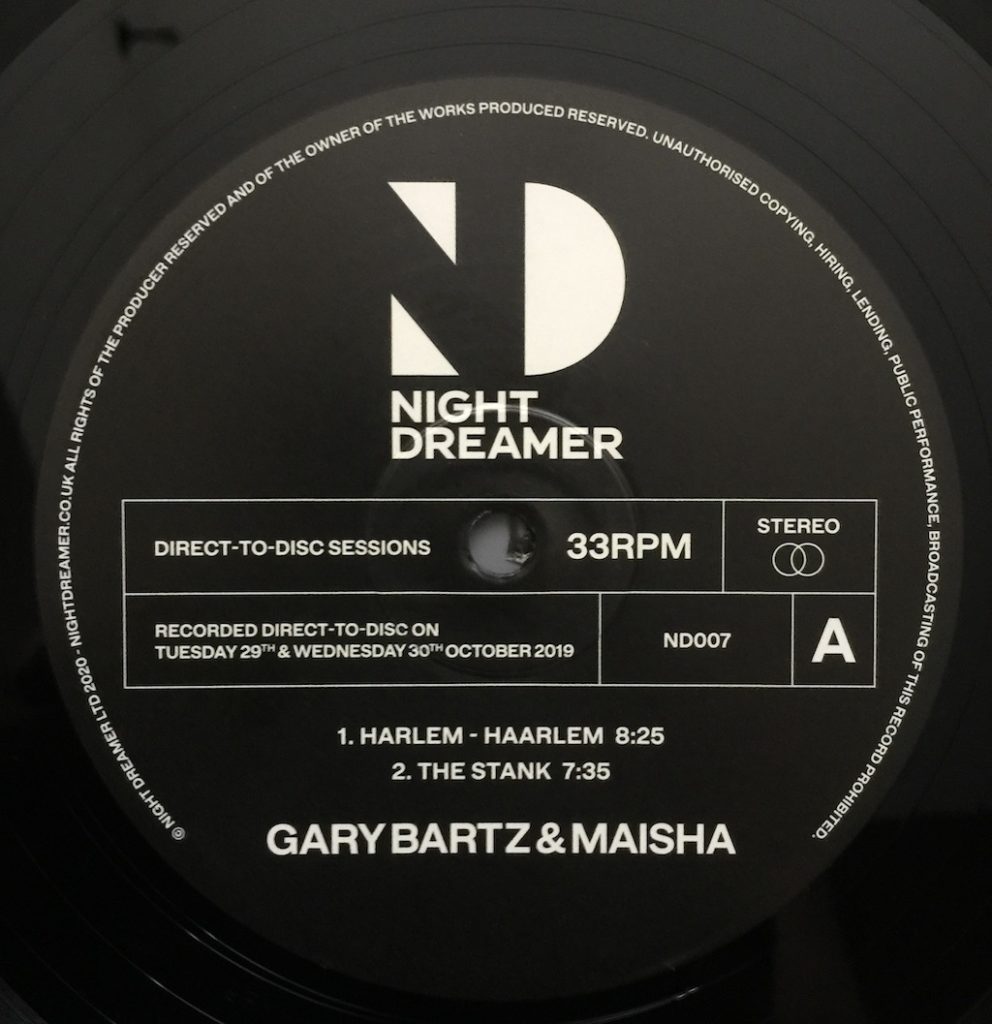 “Harlem-Haarlem”—a funky, soulful excursion that taps into a seemingly familiar riff—the band gets to show its stuff here. Bartz is spot on, note perfect and melodic as hell. These musicians sound like they’ve been playing together forever. Nothing too exotic here, but that’s part of its appeal—it’s an exercise in harmony and rhythm with a soulful swagger.

“The Stank” –– an exploratory opening on the horns leads to some pure funk. The sax is sweet here as the band steps back to deliver a steady, cool stride that gives Bartz a foundation. Nice guitar solo from Shirley Tetteh that mixes jazzy riffs with a style that reminds me of early T-Bone Walker. 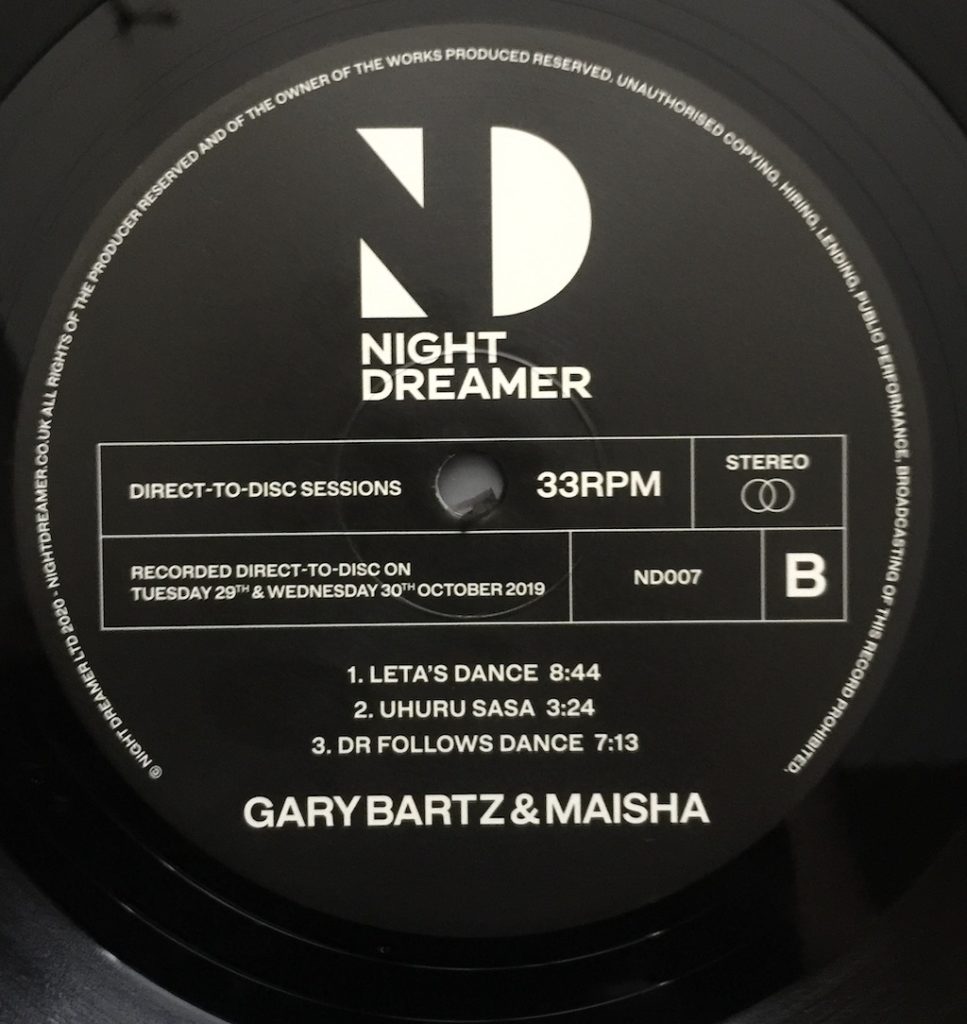 “Leta’s Dance”- cymbal rolls bring you into a pastoral setting, instruments murmuring, percussion rattling softly as the bass picks a line and we are led in a gorgeous melodic dance with all kinds of stylistic influences—an upbeat pace, like Brazilian dance music, but the sax keeps it a little more serious, and there’s this great piano work by Al Macsween that breaks up the original theme. When we return, horns in unison, the band churns away with a funky beat while the horns elevate the song.

“Uhuru Sasa” ––Bartz shows some classy major/minor moves against a silent background to bring this track in fluidly from the preceding piece—it’s a seamless transition even though the two songs are entirely different in tone and style. This track showcases the old school/new style sound as effectively as any on the record.

“DR Follows Dance” –– another seamless transition as the bass grabs the first notes and leads into a mix of funk and ethereal sounds. Percussion on this record is outstanding both for the performances and the sound quality.  Another cool guitar solo by Shirley Tetteh. The band works the funky line as a backdrop for Bartz whose intonation is marvelous—he gets that sax to sing. 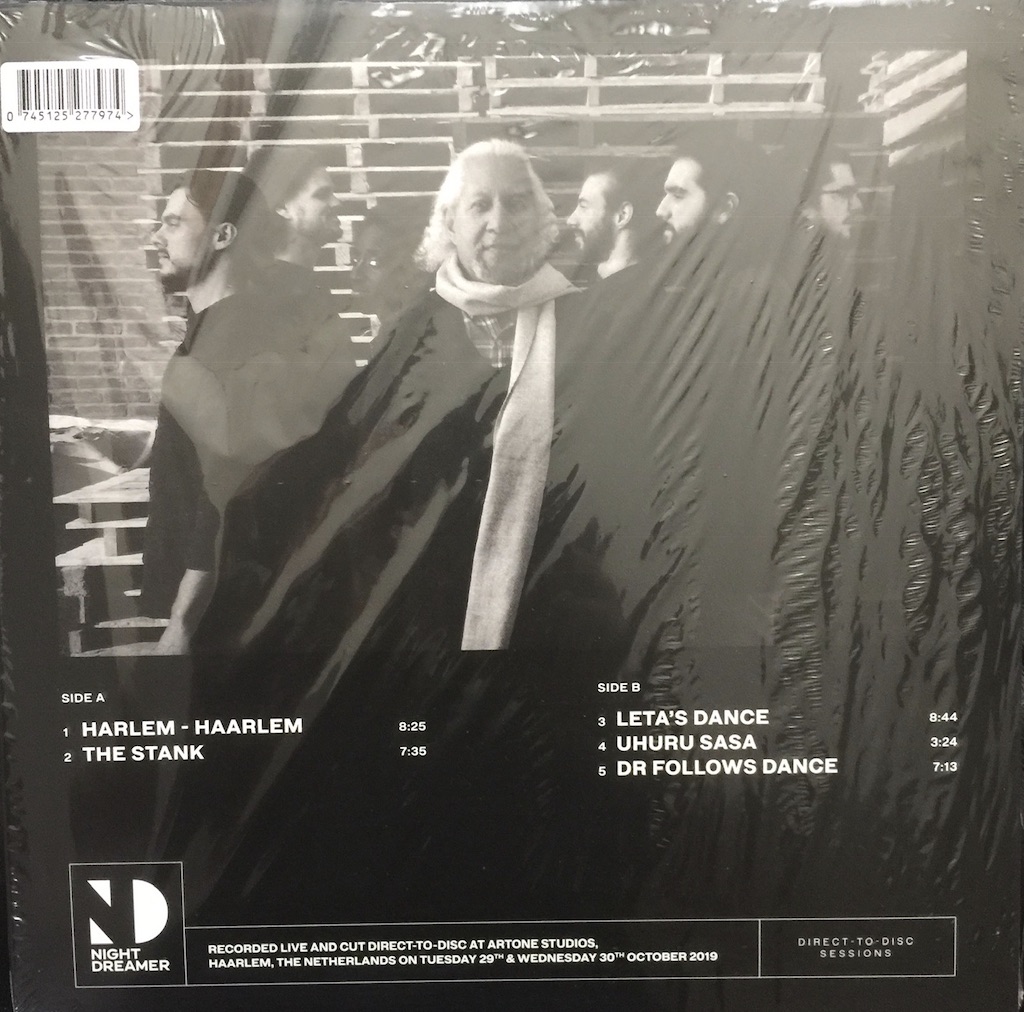 The energy of a live performance also adds to excitement here; many performers will reach beyond their limits in the inspiration of the moment, being supercharged by the presence of an audience. And, because the direct to disc approach does yield considerable sonic benefits, when it is used to deliver music that is a little more adventurous than the usual fodder found on such releases, the result is stunning. This is one such album: interesting modern jazz, captured live and cut direct to disc. It also isn’t terribly expensive, so you aren’t risking much by trying it. Maisha’s debut album is also worth buying and Gary Bartz has a large catalog that is well worth exploring. This album may get you hooked on both.

The album can be ordered through Bandcamp and is also available through various retailers, including (at the time of this writing) Amazon.

There Is No “Magic Bullet” in Hi-Fi No Magic Solutions I’ve spent some time on the audio chat fora over the years. Many popular threads these days are devoted to cheap improvements that can be made using audiophile “tweaks” or repurposed non-audiophile products. These can be applied to isolate gear, enhance the signals or connections or otherwise address some perceived problem that, once solved, offers to raise the level of music reproduction. It’s like a cheap solution to upgrade your system: from audiophile fuses, special wires (beyond simply having a high-quality interconnect, speaker wire or power cable) and other tweaks, to contact fluids and other things that you can attach to power sources, equipment, or place in the room (bowls, various harmonizers or active resonators, noise harvesters, etc.) This is apart from room treatment, which is sui generis; that is, every situation is … END_OF_DOCUMENT_TOKEN_TO_BE_REPLACED

Milt Ward Reissue-release date May 6, 2022  Andreas Vingaard, of Frederiksberg Records, dropped me a note that the Milt Ward & Virgo Spectrum record about which much has been written here will be available on vinyl beginning on May 9, 2022. However, several promo emails today, Friday, May 6, 2022 say the record is available NOW via Bandcamp (see link below). The reissue was done with the participation of Milt Ward’s family and includes comprehensive notes in a booklet. Given the price of original pressings, this should be worthwhile even if not taken from the master tape. I plan to get a copy and we’ll do a shoot-out with my “OG” pressing. I’m sure some of you are willing to brook a little sonic compromise to get access to an otherwise very hard to find, expensive spiritual jazz rarity. At the time of this writing there is one copy on Discogs in NM condition for media for over … END_OF_DOCUMENT_TOKEN_TO_BE_REPLACED

Although I don't have all the details yet, I have learned that Frederiksberg Records, a small, eclectic label from New York, is in the process of reissuing the hard to find (and even harder to pay for) jazz obscurity, Milt Ward and Virgo Spectrum. You can find out more by keeping tabs on Frederiksberg's Bandcamp page, https://frederiksbergrecords.bandcamp.com   I'm told there is a bootleg out there so be careful. Frederiksberg is doing this project with the participation of the family of Milt Ward, which is to be applauded. Hopefully, this will give more access to a great jazz record at a reasonable price. The Roots album reissue from Frederiksberg (which is sold out on vinyl on the Frederiksberg Records bandcamp site) still appears to be available through some online retailers as a pre-order, so that's another one to jump on now if you can find it-- the original is extremely pricey and … END_OF_DOCUMENT_TOKEN_TO_BE_REPLACED

Clem Snide- Forever Just Beyond With a name derived from a character in the same literary work as the band name so famously identified with the Walter Becker-Donald Fagen duo, Clem Snide has an extensive discography, typically cataloged as “alt country.” This latest release is the work of one of its founding members, Eef Barzelay, who was responsible for much of the songwriting and singing. According to his bio, Barzelay suffered some serious bumps in the road during the last decade, including a failing marriage and financial ruin. At the same time, he learned that Scott Avett was a fan and they found inspiration in each other, leading to this album- a collaboration of artistry where Avett and Barzelay share some writing credits and Avett produces. The result is a fresh, upbeat set of tunes that are appealing in their simplicity and refreshing in their sincerity. The band is first tier … END_OF_DOCUMENT_TOKEN_TO_BE_REPLACED

Muriel Grossmann- Reverence Muriel Grossmann continues her quest for musical ascension on Reverence, which was released on vinyl in early December, 2019 on the RR Gems label as a 2 LP set. The compositions are Grossmann’s, and the band is much the same as the group of seasoned musicians with whom she has worked for some time (and detailed in the review of her Golden Rule), but for one notable exception: the addition of a keyboard player who brings that rich, woody Hammond B-3 sound to a series of compositions devoted to Africa. In some ways, Ms. Grossmann’s exploration of the roots of jazz deliberately eschews any superficial attempt to make African music. Instead, she draws inspiration from its influences, which are wide ranging and deep—you can hear rhythm and blues sounds mixed with more traditional African instrumentation and polyrhythms and come away with something that is both … END_OF_DOCUMENT_TOKEN_TO_BE_REPLACED