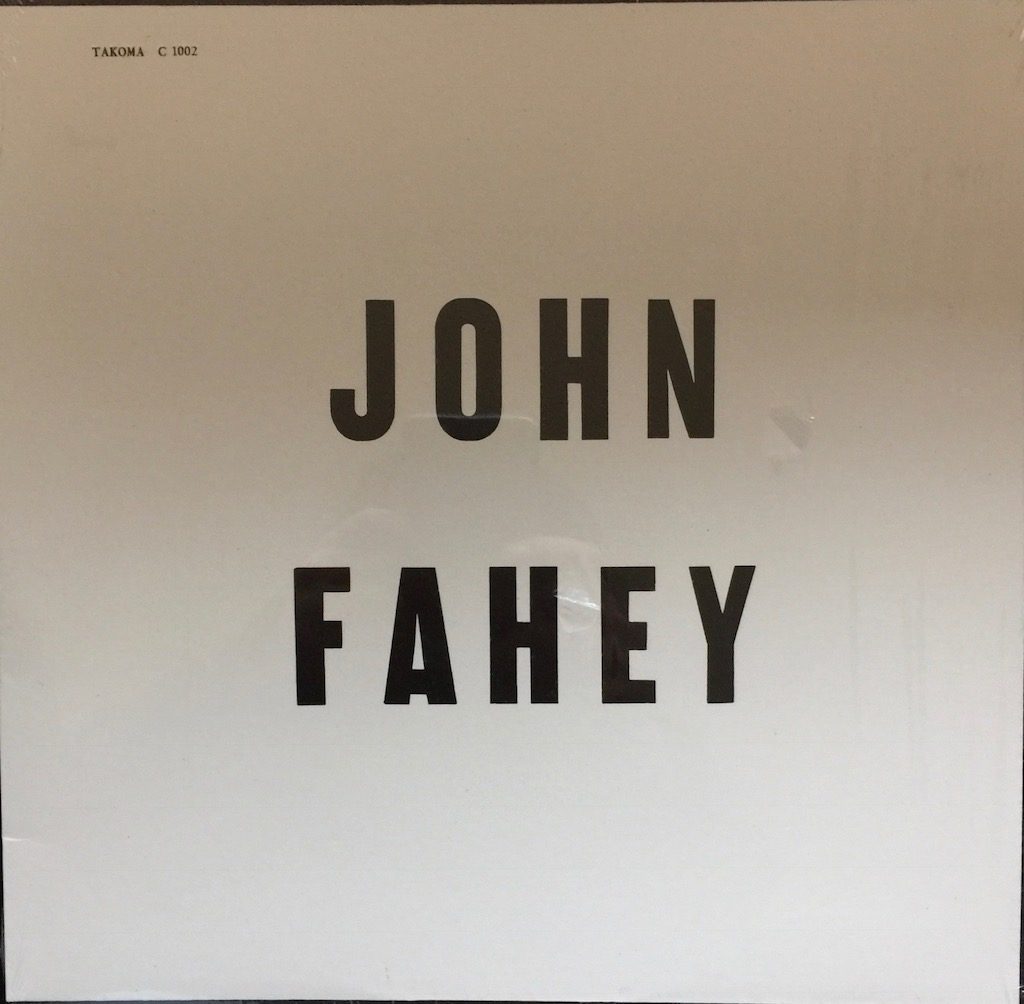 John Fahey is remembered as seminal figure in the original blues revival movement that flourished in the early-mid ‘60s. His efforts, along with those of others, led to seismic change in popular music, when more traditional rock and roll was replaced by blues-driven harder rock in the later ‘60s. (I think the impact on folk/acoustic scene was more limited, commercially, for a variety of reasons). Fahey was part of the effort to locate still living rural blues performers – including Skip James–who had been all but forgotten[1] in the era from the Depression through the ‘50s. This was no easy undertaking—the paths back in time were lost, broken or overgrown with myth and misinformation. Fahey’s cohorts included Alan Wilson and Henry Vestine, both of whom were part of the early line up of Canned Heat and instrumental in the revival of the blues as popular music.

Of course, there were folklorists, music scholars and others who were an essential part of the tale, including Alan Lomax and his father, John, whose field recordings document the culture and history of American folk music, including the blues. But, much of this scholarship was academic, and inward facing. It did not seize the public imagination.

The popularization of the blues as an authentic vernacular that appealed to modern audiences coincided with the folk revival in the United States and similar movements in the UK; it was a youth-driven movement, part of the quest for authentic music in much the same way that “roots/Americana” styles have taken hold with younger audiences today. Fahey was no mere dilettante, though: he obtained a masters degree from UCLA, devoting his thesis to Charley Patton (whose body of work figures later in Fahey’s life). 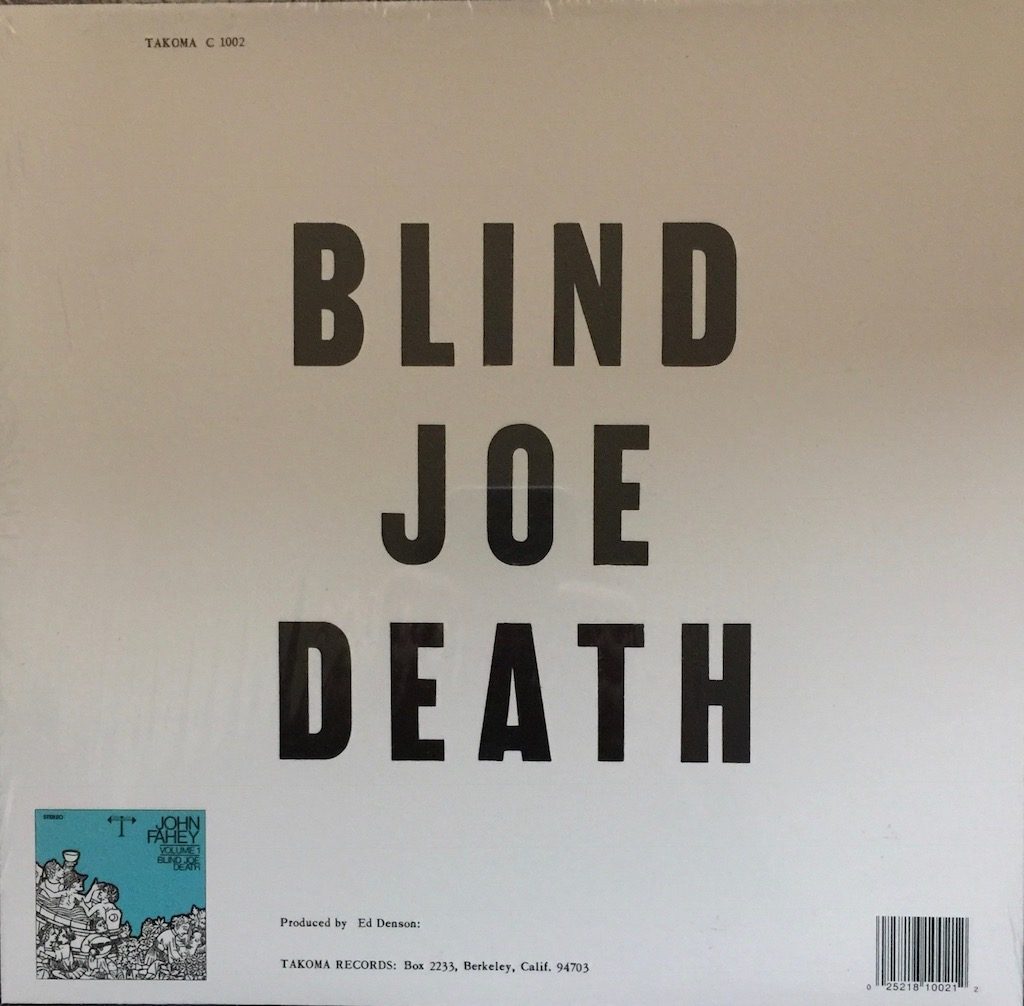 This is a long slow wind-up to some of Fahey’s own recordings, including the album Blind Joe Death, a sort of tongue in cheek nod to the dark mystique of the blues. The album itself is no joke- it is primitive, steel string acoustic blues. The original pressings are quite rare- only 100 copies were pressed on Fahey’s private label, known as Takoma; it was later reissued in 1964, dropping one cut, “West Coast Blues” and re-recording others. The entire album was re-recorded in 1967, and includes that track. You can try your luck on the older pressings; I opted to buy a current Takoma release for less than $20. 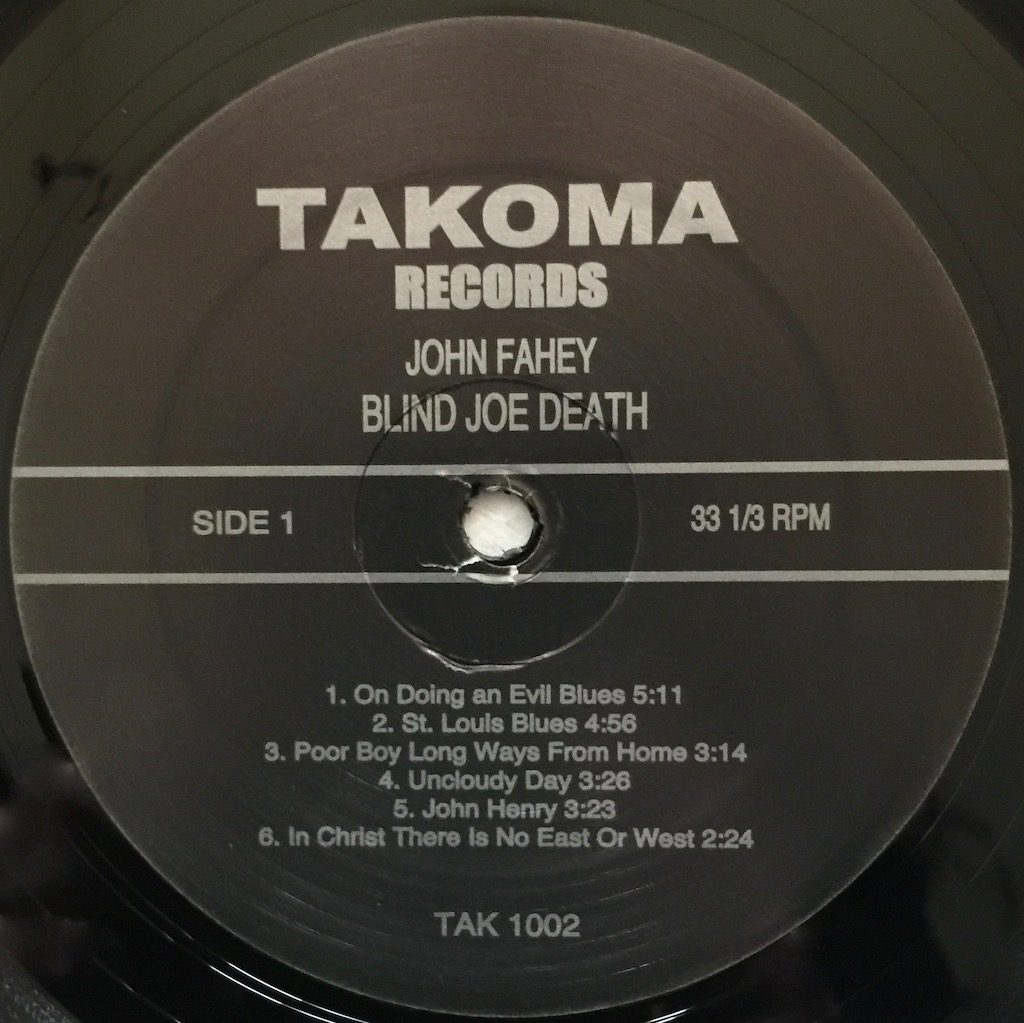 Blind Joe Death isn’t a sonic or musical showstopper. I would treat it instead as an artifact of blues history, as much as any of the wonderful old records that Fahey and his cohorts unearthed from the pre-Depression years. I hope to review a copy of Fahey’s Death Chants, Breakdowns & Military Waltzes soon.

[1] The “Chicago” blues, which enjoyed great popularity in the ‘50s, had taken a different shape- urban, electrified and distinct from its roots in the Delta.

Muriel Grossmann- Reverence Muriel Grossmann continues her quest for musical ascension on Reverence, which was released on vinyl in early December, 2019 on the RR Gems label as a 2 LP set. The compositions are Grossmann’s, and the band is much the same as the group of seasoned musicians with whom she has worked for some time (and detailed in the review of her Golden Rule), but for one notable exception: the addition of a keyboard player who brings that rich, woody Hammond B-3 sound to a series of compositions devoted to Africa. In some ways, Ms. Grossmann’s exploration of the roots of jazz deliberately eschews any superficial attempt to make African music. Instead, she draws inspiration from its influences, which are wide ranging and deep—you can hear rhythm and blues sounds mixed with more traditional African instrumentation and polyrhythms and come away with something that is both … END_OF_DOCUMENT_TOKEN_TO_BE_REPLACED

Stylus Life- StylusTimer Stylus life is a recurring question in audio discussions. Some serious attention was devoted to the subject here, in Mike Bodell’s “The Finish Line for Your Phono Stylus.” That article examined the issue from a number of perspectives, including early studies, claims by cartridge manufacturers and real-life experiences by users. It also generated a long, interesting thread on the Steve Hoffman forum that is worthwhile to read. The Hoffman thread also generated an experiment by Ray Parkhurst who documented the wear of a new stylus under certain controlled conditions, which included a microscopic examination of the stylus at various time intervals over long hours of repeated play. See https://forums.stevehoffman.tv/threads/the-finish-line-for-your-phono-cartridge-stylus-wear-by-mike-bodell.842572/#post-21292730.   Whether you lean toward more optimistic … END_OF_DOCUMENT_TOKEN_TO_BE_REPLACED

Incoming! (More Interesting Records)  An "interesting record" to me offers something unexpected, whether it is a fresh take on a recognized genre, or something that opens a new way of experiencing instruments in combination. It does not have to be "strange" or challenging to listen to; in fact, I'm a sucker for a good melodic hook and enjoy technical prowess as much as anybody, but there has got to be something "more"-- an intangible that differentiates the record from the millions of others to which we all have access.   As mentioned in a recent editorial, a lot of records come in and not all get written up. It’s not an editorial decision or any reflection of the music or sonics; I only have so much time, and I tend not to write short blurbs, but longer (some may say ‘too long’) reviews. My “incoming” piles continue to grow as I publish. This series of short capsules is meant to … END_OF_DOCUMENT_TOKEN_TO_BE_REPLACED

More on Milt Ward and Virgo Spectrum Courtesy of Bill Pierce, the former Chair of Woodwinds at Berklee. Pierce worked with Milt Ward in the late ‘60s, including a stint as part of the horn section for Stevie Wonder. Pierce figures prominently on the album, Milt Ward and Virgo Spectrum; I have added his recollections to the feature article.   (Scroll down to the bottom of the article). My thanks to Bill Pierce, whose band, the Ralph Peterson Messenger Legacy, is currently active and touring.     … END_OF_DOCUMENT_TOKEN_TO_BE_REPLACED

A Phono Bargain or Three The ever-resourceful Steve Leung (VAS) built me a Franken-Denon 103, repotted in a wooden body with a micro-ridge stylus. In my estimation, it's a phono bargain, given its performance. Wonderful tone and an advanced stylus shape. I have zero experience with stock Denon 103 cartridges, a perennial favorite among budgeteers and tweakers. This Franken-cartridge took advantage of various tweaks that have been performed by DIY'ers and retipping shops over the years-- rebodying the cartridge, using elastomers to 'pot' the cartridge motor assembly into a new body and retipping the old school conical stylus with a more modern profile. Steve did it all in one swoop for me. I didn't even have to supply the stock Denon- he sourced it and did his thing. Set up on a Kuzma 4 Point 9, which is  currently mounted on my vintage Technics SP-10, I’ve now got the vintage Quad ESL … END_OF_DOCUMENT_TOKEN_TO_BE_REPLACED