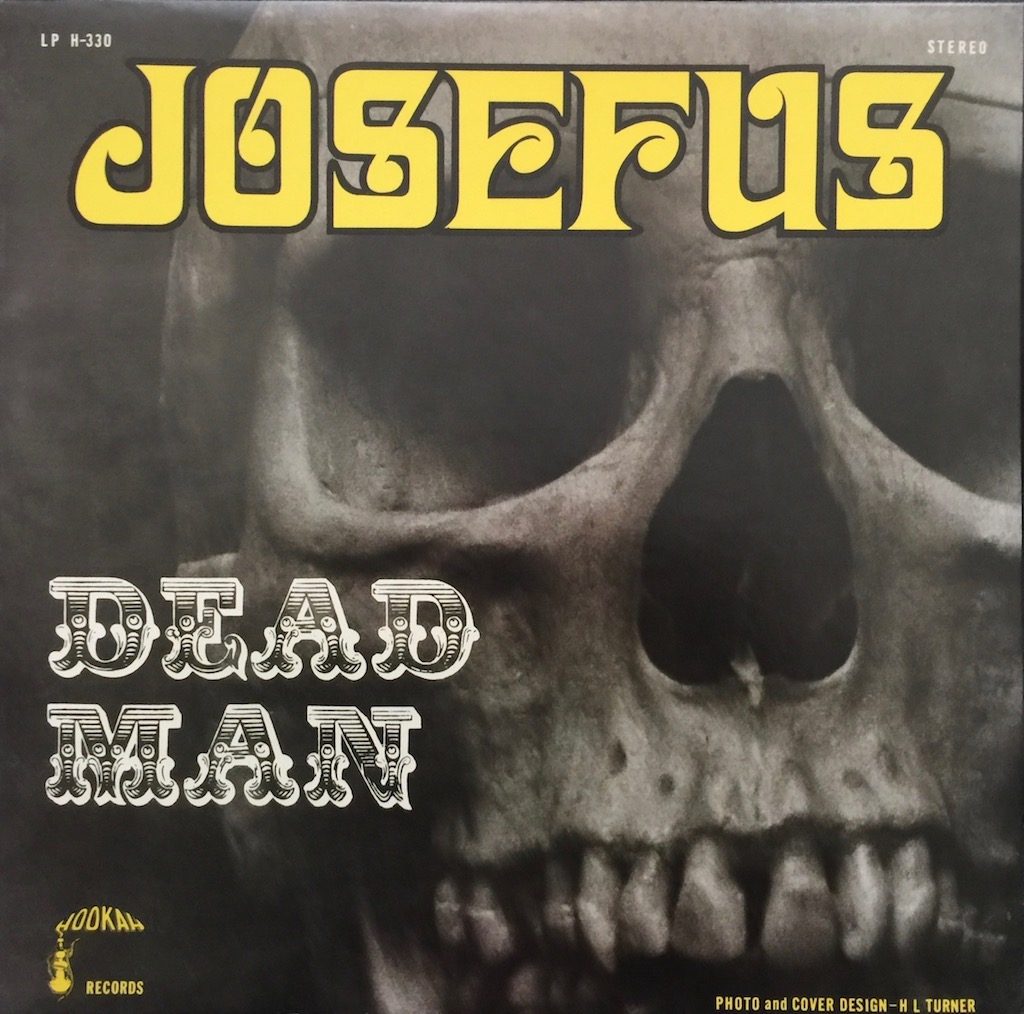 Before we get to Josefus, and their classic, Dead Man, a precursor album of hard rock that was seemingly lost except to an informed group of fans and enthusiasts, I have a story to tell.

As full time resident of Austin, I am now entitled to complain about SXSW.[1]The first few years we were living here during the winter-spring season (and returning to New York for the remainder of the year), we’d “do” SX—take in some shows, go to a few panel discussions and just walk the scene. I’m told, like everything else here, that it was “way better” before—I certainly know plenty of entertainment lawyers who used to make the trek back in the days when the major labels were still handing out advances and signing bands and Austin hadn’t yet gained “it” status as a city.

Now, I have a more placid approach to the whole thing—occasionally, there will be a “big act” that I want to see, but mostly, we stay on the fringes—there are venues operating everywhere during the festival, including some that aren’t really “official” SXSW sanctioned events, but who cares? We caught an act—Sarah Borges—we’ve heard many times back East (she hails from the Boston area) at a seedy little club in South Austin a few years ago. She’s always terrific and puts on a great show.

This past year, a colleague from UT was scheduled to play at an event held at the old Antone’s Record Store.[2]My friend is known for his eclectic taste in obscure ethnic folk music, has a Ph.D. in history and is a published author and radio show host, among other things. It wasn’t much trouble to get to the venue since we didn’t have to drive through the downtown area; once there, we positioned ourselves among the record bins when the band came on. Except it wasn’t my friend’s band.

Instead, I was greeted with a blast of heavy, hard rock that brought me back to the early days of post-Cream, early Zep– hard driving rhythms and wailing vocals with just the right amount of psychotic guitar work. The guitar player, who was excellent, was using a positively ancient Echoplex,[3]which fascinated me, not only for its sound but its relative rarity. The band was so loud (even with my ear protection), I could not hear the record store guy’s answer to my question “Who are these guys?” He typed the name on his phone and showed it to me: Josefus.

Turns out, this band has been doing this sound from the early days of hard rock. Their big record—Dead Man—was released in 1970 and original copies fetch big money. It was no coincidence that reissues were available at the record store counter so I bought one. But, yikes! Live, these folks were crushing it! I talked briefly with the guitarist, Dave Mitchell, after the set and we tried to trade emails, but stuff happens (or in this case, didn’t—we failed to connect).

Josefus isn’t a secret among those who treasure heavy rock of the “proto-metal” variety and the band has had a fair amount of coverage over the years as a “lost” treasure. 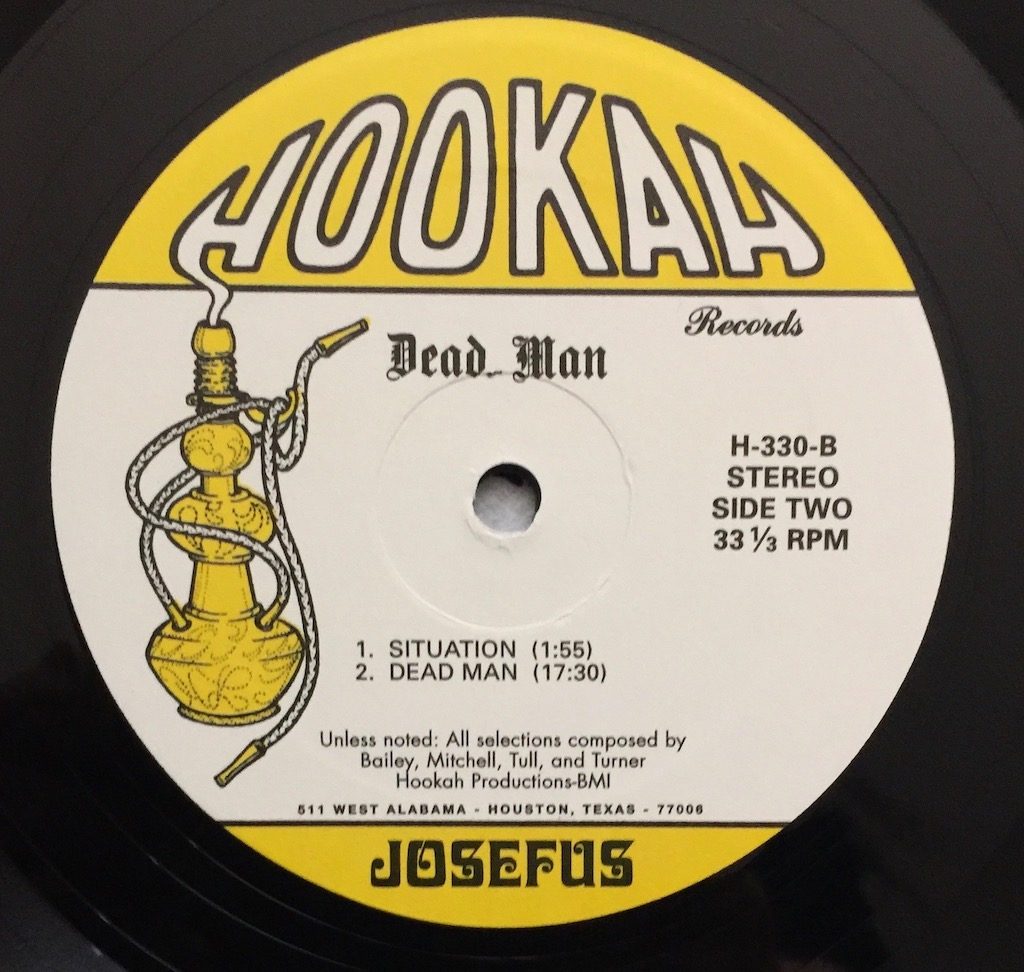 The original album was released on Hookah Records, a small independent label that was apparently formed for the purpose of releasing Josefus’ material, [4]which may explain why original pressings are scarce. The copy I bought after their set was released in 2014 by the Numero Group, has a nice jacket and reproduces the original label. 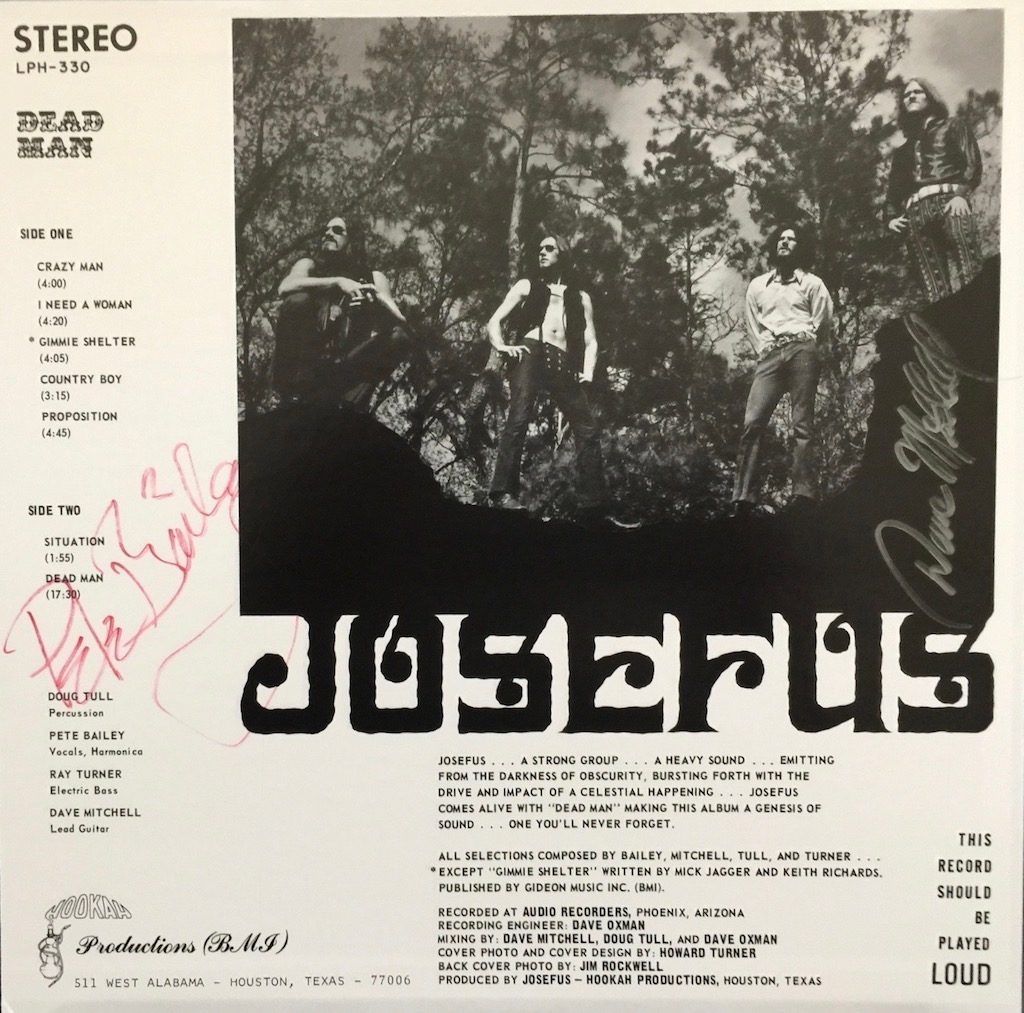 The reissue sounds ok, it is not an audiophile record by any means; I’m led to believe that it is a needle drop, something I am attempting to verify.  I’ve seen some complaints about pressing quality as well, but I don’t know if an original pressing would make much difference at an exponentially greater price. It’s a bit of a time capsule—and it isn’t about nuances. My copy seems fine, despite the question over source material. Anybody want to spend the money to reissue on vinyl from the tapes, assuming they still exist and are in good condition? Exactly. Sundazed released it as part of a two-fer on CD and Bob Irwin apparently had access to the tapes. I’m going to buy the Sundazed and take a listen.[5]

Truth is, the band, with two original members- the guitarist (Mitchell) and lead singer Pete Bailey- sounded great live despite the years and mileage and the weird acoustics of a relatively small space. I gather they perform occasionally, and have worked with Leesa Harrington-Squyres, the drummer from Lez Zeppelin[6]in recent years.

Though early hard rock, Texas style, there is little to mark this as a “southern” or Texas sound in my estimation, despite the hype sticker on the LP reissue which talks about “southern fried…Sabbath.” Is it worth checking out? Absolutely, if, like me, you never heard it before and you enjoy this era. It’s a blast. Literally. Here is the band’s site: http://www.jam280.com/josefus.html

As to my friend, I saw him in the parking lot after the show. Turns out, though I was told to go to Antone’s Record Store, my friend’s band was playing at the pizzeria next door. Easy mistake, but one I’m glad was made—I’ve heard my friend a few times, with a couple different bands at other venues, but catching Josefus was a complete and welcome surprise.

[1]For a funny take on this, see https://thehardtimes.net/music/woman-just-moved-austin-excited-complain-sxsw-first-time/

[2]That record store was at one time owned by Clifford Antone, who also owned the famous venue. Now, it is owned by several long time employees who bought the business after Clifford passed, in 2006. The venue is also back in operation, at a different location downtown, with new owners. It’s a good place to hear music and I’ll cover that in another piece.

[3]The Echoplex was a portable tape delay unit that was first marketed in the early ‘60s, though it had precursors. Its value isn’t just in giving the guitarist (or other instrumentalist plugging in) the ability to play over a recorded loop; the tube version had an incredibly juiced up sound that was itself a contributing factor to the sound. There were later solid state units and there are a variety of emulators and pedals that can be used for this high gain “juicy” sound—coupled with a Les Paul and a Marshall stack, this is the lashing, heavy sound that people often associate with the Les Paul in ‘hard rock’ mode.

There Is No “Magic Bullet” in Hi-Fi No Magic Solutions I’ve spent some time on the audio chat fora over the years. Many popular threads these days are devoted to cheap improvements that can be made using audiophile “tweaks” or repurposed non-audiophile products. These can be applied to isolate gear, enhance the signals or connections or otherwise address some perceived problem that, once solved, offers to raise the level of music reproduction. It’s like a cheap solution to upgrade your system: from audiophile fuses, special wires (beyond simply having a high-quality interconnect, speaker wire or power cable) and other tweaks, to contact fluids and other things that you can attach to power sources, equipment, or place in the room (bowls, various harmonizers or active resonators, noise harvesters, etc.) This is apart from room treatment, which is sui generis; that is, every situation is … END_OF_DOCUMENT_TOKEN_TO_BE_REPLACED

Milt Ward Reissue-release date May 6, 2022  Andreas Vingaard, of Frederiksberg Records, dropped me a note that the Milt Ward & Virgo Spectrum record about which much has been written here will be available on vinyl beginning on May 9, 2022. However, several promo emails today, Friday, May 6, 2022 say the record is available NOW via Bandcamp (see link below). The reissue was done with the participation of Milt Ward’s family and includes comprehensive notes in a booklet. Given the price of original pressings, this should be worthwhile even if not taken from the master tape. I plan to get a copy and we’ll do a shoot-out with my “OG” pressing. I’m sure some of you are willing to brook a little sonic compromise to get access to an otherwise very hard to find, expensive spiritual jazz rarity. At the time of this writing there is one copy on Discogs in NM condition for media for over … END_OF_DOCUMENT_TOKEN_TO_BE_REPLACED

Although I don't have all the details yet, I have learned that Frederiksberg Records, a small, eclectic label from New York, is in the process of reissuing the hard to find (and even harder to pay for) jazz obscurity, Milt Ward and Virgo Spectrum. You can find out more by keeping tabs on Frederiksberg's Bandcamp page, https://frederiksbergrecords.bandcamp.com   I'm told there is a bootleg out there so be careful. Frederiksberg is doing this project with the participation of the family of Milt Ward, which is to be applauded. Hopefully, this will give more access to a great jazz record at a reasonable price. The Roots album reissue from Frederiksberg (which is sold out on vinyl on the Frederiksberg Records bandcamp site) still appears to be available through some online retailers as a pre-order, so that's another one to jump on now if you can find it-- the original is extremely pricey and … END_OF_DOCUMENT_TOKEN_TO_BE_REPLACED

Clem Snide- Forever Just Beyond With a name derived from a character in the same literary work as the band name so famously identified with the Walter Becker-Donald Fagen duo, Clem Snide has an extensive discography, typically cataloged as “alt country.” This latest release is the work of one of its founding members, Eef Barzelay, who was responsible for much of the songwriting and singing. According to his bio, Barzelay suffered some serious bumps in the road during the last decade, including a failing marriage and financial ruin. At the same time, he learned that Scott Avett was a fan and they found inspiration in each other, leading to this album- a collaboration of artistry where Avett and Barzelay share some writing credits and Avett produces. The result is a fresh, upbeat set of tunes that are appealing in their simplicity and refreshing in their sincerity. The band is first tier … END_OF_DOCUMENT_TOKEN_TO_BE_REPLACED

Muriel Grossmann- Reverence Muriel Grossmann continues her quest for musical ascension on Reverence, which was released on vinyl in early December, 2019 on the RR Gems label as a 2 LP set. The compositions are Grossmann’s, and the band is much the same as the group of seasoned musicians with whom she has worked for some time (and detailed in the review of her Golden Rule), but for one notable exception: the addition of a keyboard player who brings that rich, woody Hammond B-3 sound to a series of compositions devoted to Africa. In some ways, Ms. Grossmann’s exploration of the roots of jazz deliberately eschews any superficial attempt to make African music. Instead, she draws inspiration from its influences, which are wide ranging and deep—you can hear rhythm and blues sounds mixed with more traditional African instrumentation and polyrhythms and come away with something that is both … END_OF_DOCUMENT_TOKEN_TO_BE_REPLACED