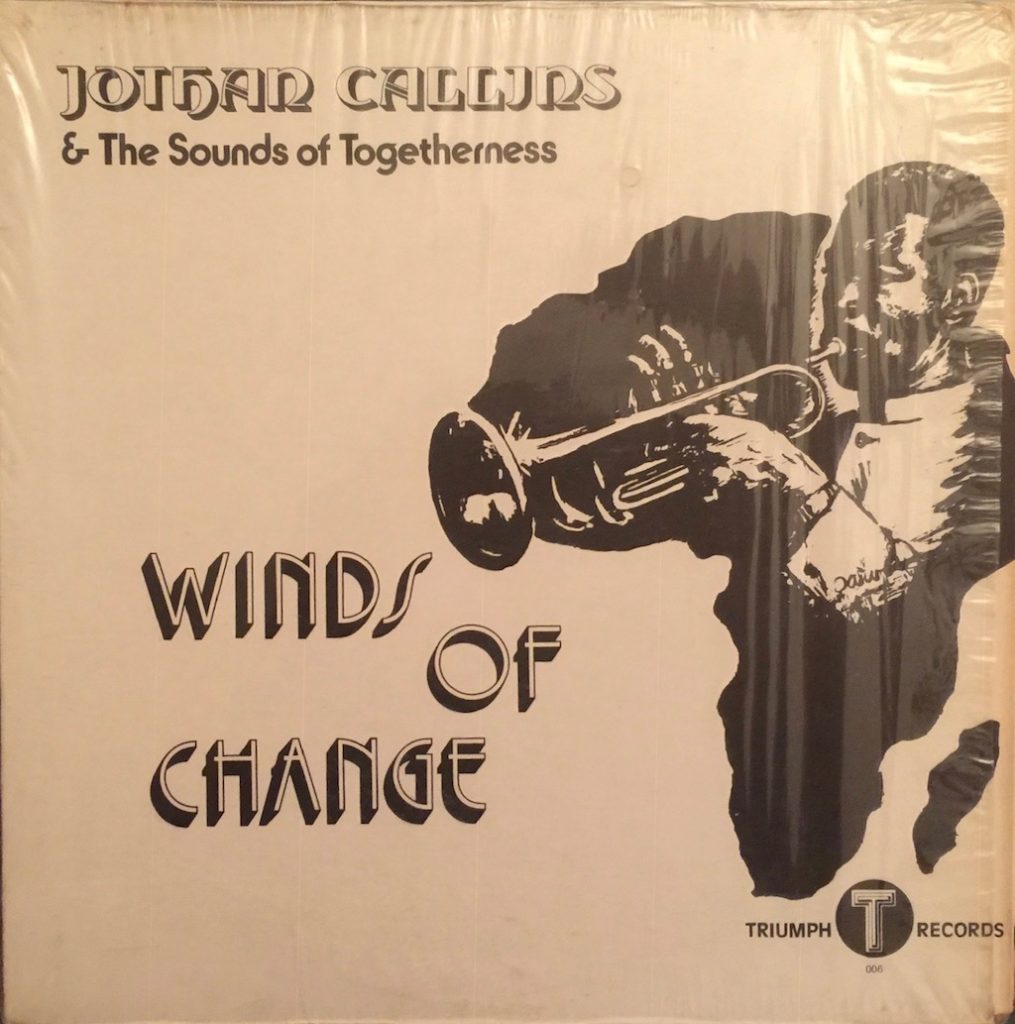 Jothan Callins released one album as a band leader- Winds of Change, which captures everything that I revel in when listening to the less well travelled jazz records I’ve been seeking: engaging compositions, stunning performances and impressive sonics. Though Callins was known as a bassist, he plays trumpet on this album (Cecil McBee handles the bass and glorious it is).

Released as a one and done on Triumph Records, there is a little information about Callins and almost nothing about the sessions. Born in Birmingham, Alabama, Callins played with a long list of luminaries,[1] was an educator and obtained his Masters degree at the University of Pittsburgh (where Nathan Davis directed the jazz studies program). He established the Birmingham Youth Jazz Ensemble (BYJE) in addition to becoming the first Jazz Artist in Residence in the Birmingham Public Schools.[2] At the time this record was released, Callins was teaching in NYC.

Winds of Change is apparently the only album which Callins released as a band leader. It’s stunning and worth the effort and expense to find a copy.

The attractions of this album are evident from the opening notes: everything is “just so,” from a silky trumpet, tinkling piano and sinewy bass tones. Cecil McBee’s bass work in combination with piano—used not only for melodic runs but as a rhythm instrument –is so soulful; there’s a bowed bass section a few minutes into the first track, “Prayer for Love and Peace” that takes the listener on an excursion from the main theme. And then we return. It’s glorious. 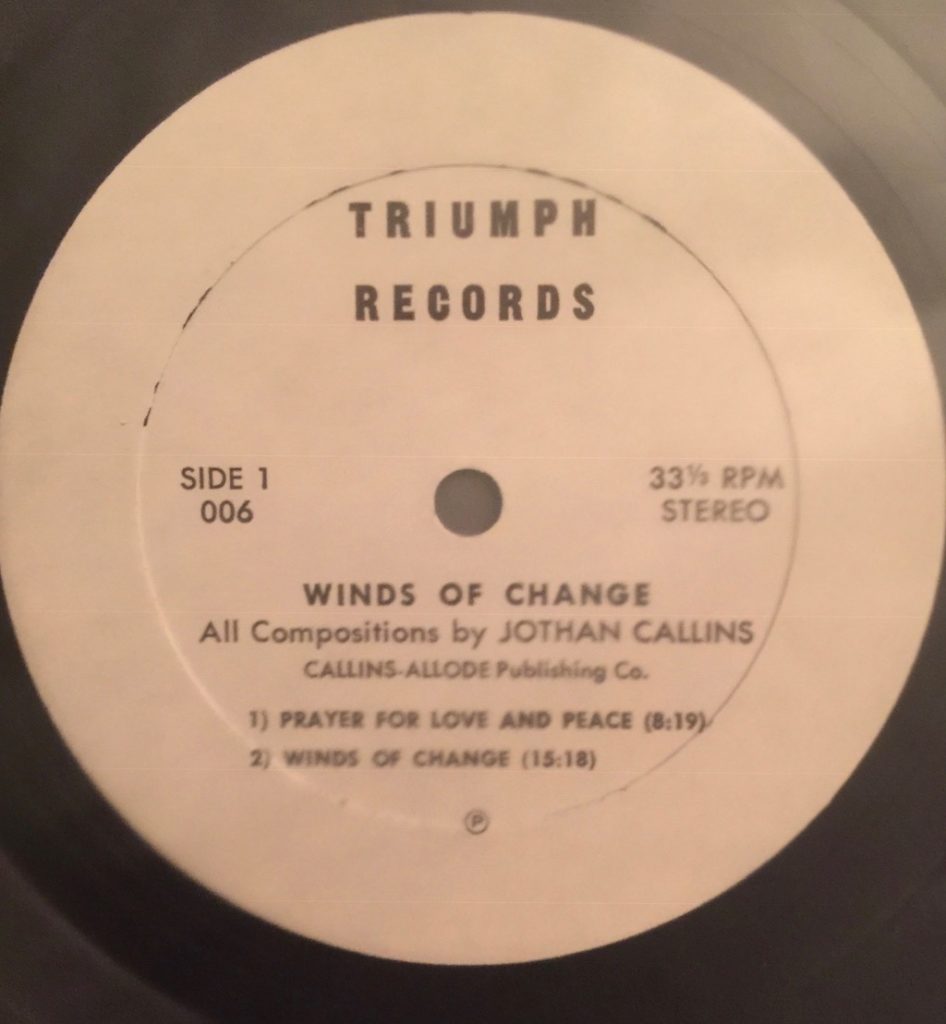 The second track, “Winds of Change,” starts with struck percussion, then the band enters in unison—setting up a riff that allows for a cool descending scale on the horn. Connor’s drum work is a marvel. This is an all-star band and it shows—not by excesses but the sheer level of musicianship on display as they work their way through the complexities of this piece.

It’s not so far out as to be cacophony, but it requires a little attention. And that’s where the pay-off is: listen to the intricate right hand on the piano mid-way through the piece or McBee’s use of the high notes of a chord to underscore the piano part. There is a percussion solo, followed by a held note on the trumpet and time for McBee to plays these twisted figures on the bass (along with some spacey sounding emanations) before we come back to the band; the drum sounds here are very real as the band builds a tempo. Through this, Callins is calling on the trumpet and the piano sets us on another whirl, with yet another twist on the theme. It’s a hell of a set, in one composition. 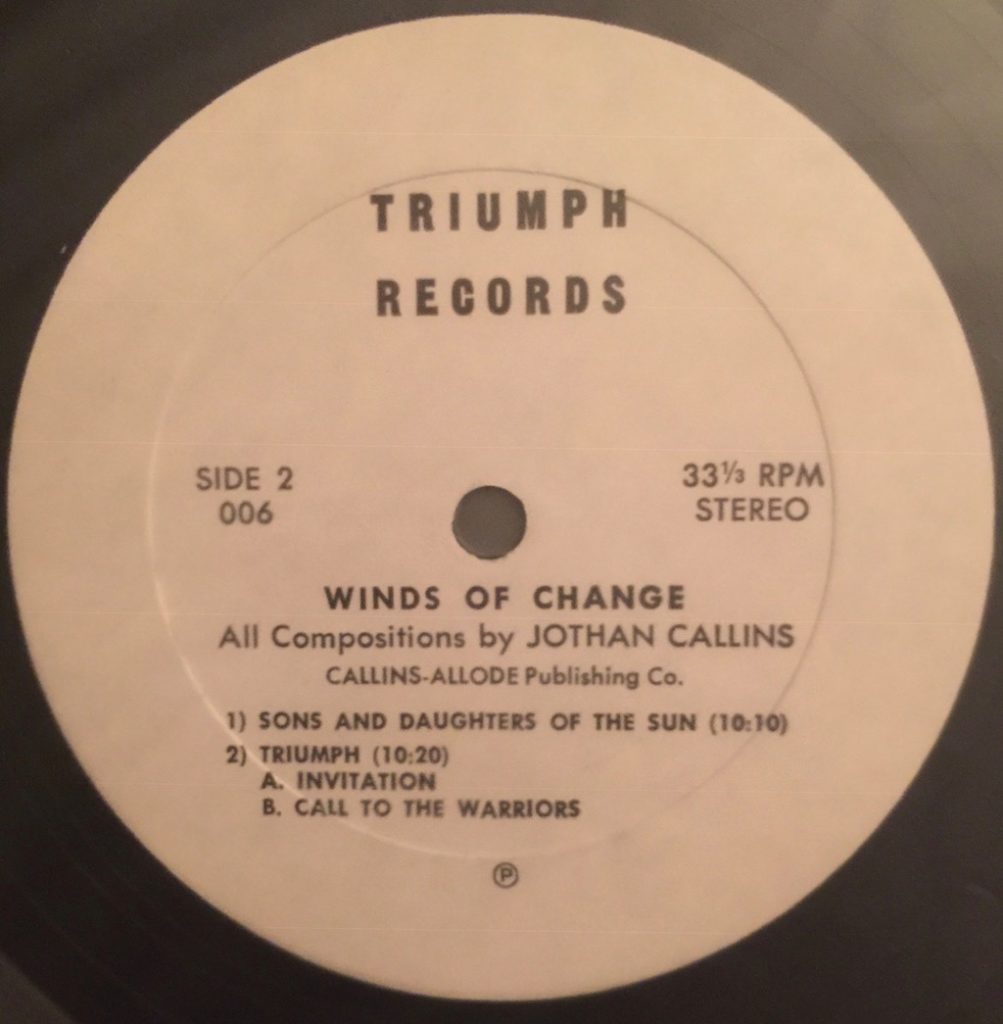 Side 2 starts with a slower, more contemplative tone in “Sons and Daughters of the Sun,” as the trumpet leads, the snare rattles, and the bass thrums. McBee picks it up with plucked notes on the bass, great hand struck drums and the piano plays a repeated figure over which Callins trumpets a groove. This piece is a real showcase for Callins—and though he is exploring a lot of territory, Callins never loses the thread. This band is tightly behind him all the way until the beautiful finish in a wash of minor notes (catch the strumming on the bass toward the very end).

The second track on this side, “Triumph,” also begins with a mellow melodic line from Callins, with a stop and shuffle, some cool brush work on the drums and kicking bass work. The piano is full and rich; everybody is synching to a cool beat- then an ostinato on the piano that acts as a signal for change- the whole band shifts to a different rhythm as Callins leads and defines the pace. The piece gets intricate, but never confusing. There is some sustain and the harmonic overtones of the instruments at the end of the track clue you in to how good this album can sound. 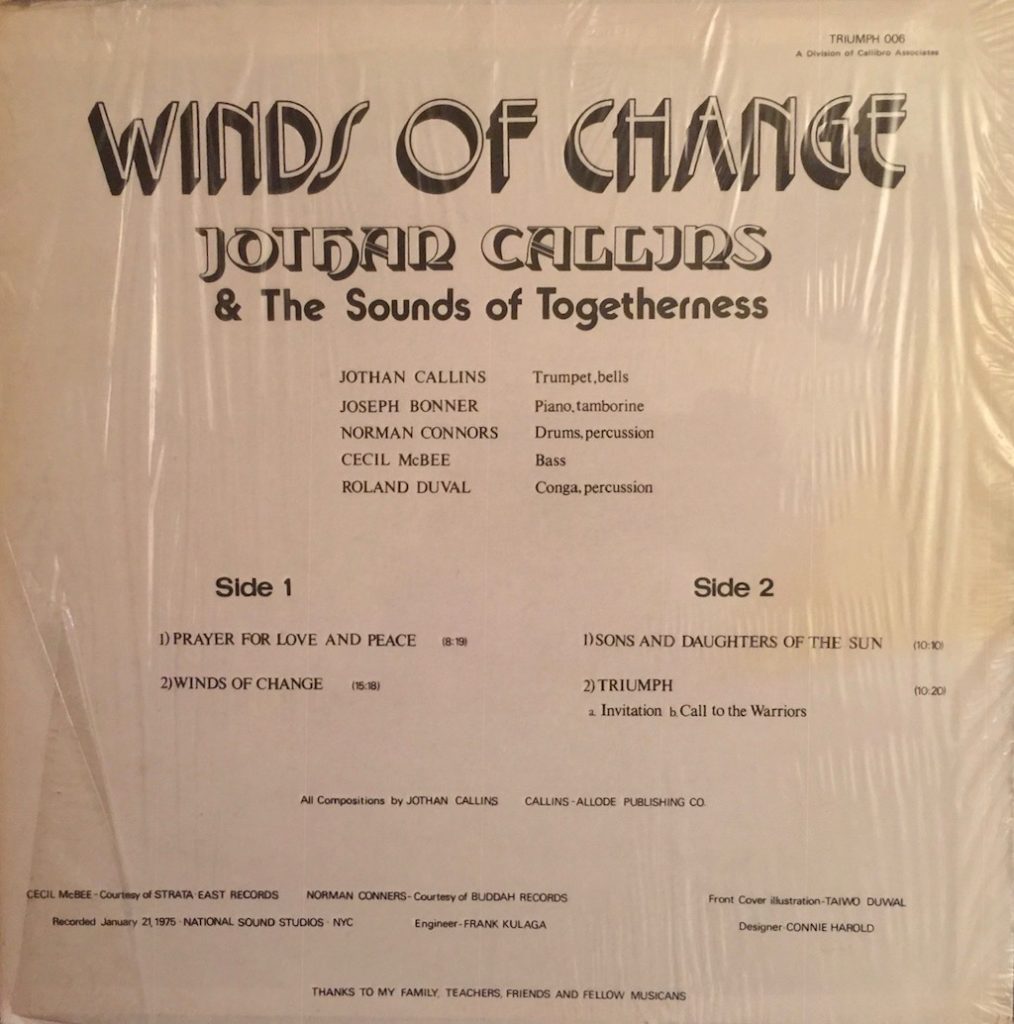 Sound quality overall is first rate. The gain on the second track of the second side sounds somewhat diminished compared to the other tracks, but a tweak of the volume control took care of that. Copies aren’t entirely scarce but they are now pricey. Mine came in shrink with the folded 4-sided paper insert. 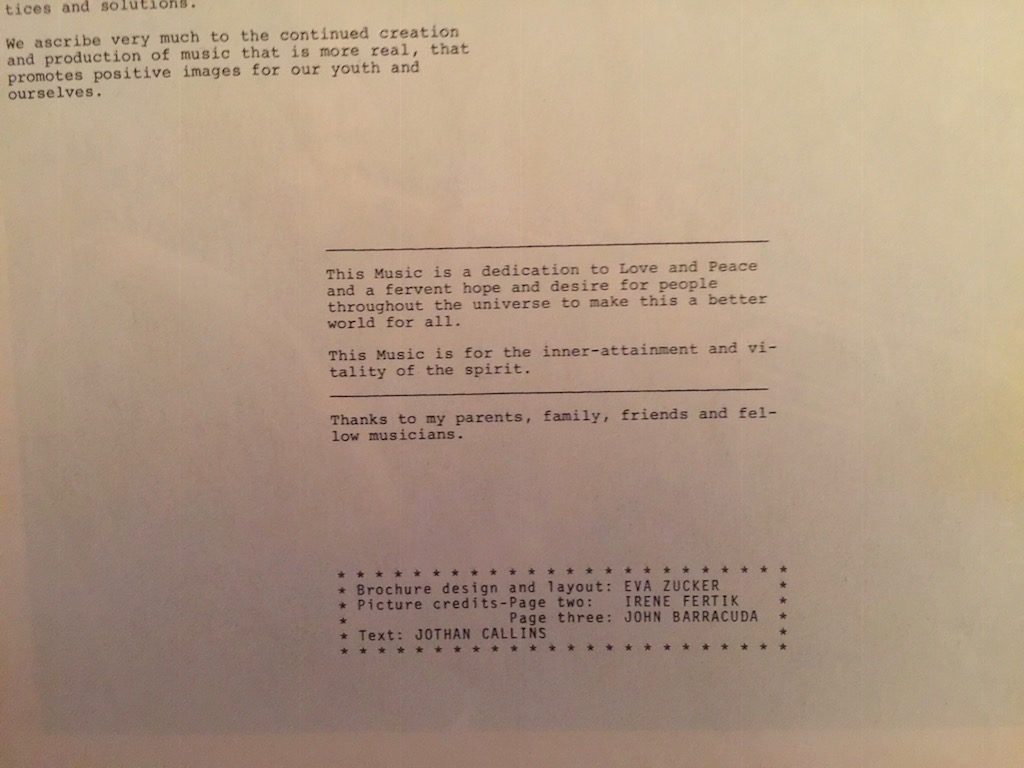 This album isn’t really obscure among collectors but it certainly isn’t mainstream. It’s also as good an introduction as any into the world of private label, “rare groove” jazz.   Though he only released one album as a band leader, and passed away while still in his prime, Winds of Change is as fitting a tribute to Jothan Callins as any. A gorgeous record.

[2] According to the BYJE web site (still up as of this writing), Callins specialized performance/workshops for children and adults and developed jazz programs for elementary, middle and high schools across the country.

Although I don't have all the details yet, I have learned that Frederiksberg Records, a small, eclectic label from New York, is in the process of reissuing the hard to find (and even harder to pay for) jazz obscurity, Milt Ward and Virgo Spectrum. You can find out more by keeping tabs on Frederiksberg's Bandcamp page, https://frederiksbergrecords.bandcamp.com   I'm told there is a bootleg out there so be careful. Frederiksberg is doing this project with the participation of the family of Milt Ward, which is to be applauded. Hopefully, this will give more access to a great jazz record at a reasonable price. The Roots album reissue from Frederiksberg (which is sold out on vinyl on the Frederiksberg Records bandcamp site) still appears to be available through some online retailers as a pre-order, so that's another one to jump on now if you can find it-- the original is extremely pricey and … END_OF_DOCUMENT_TOKEN_TO_BE_REPLACED

Clem Snide- Forever Just Beyond With a name derived from a character in the same literary work as the band name so famously identified with the Walter Becker-Donald Fagen duo, Clem Snide has an extensive discography, typically cataloged as “alt country.” This latest release is the work of one of its founding members, Eef Barzelay, who was responsible for much of the songwriting and singing. According to his bio, Barzelay suffered some serious bumps in the road during the last decade, including a failing marriage and financial ruin. At the same time, he learned that Scott Avett was a fan and they found inspiration in each other, leading to this album- a collaboration of artistry where Avett and Barzelay share some writing credits and Avett produces. The result is a fresh, upbeat set of tunes that are appealing in their simplicity and refreshing in their sincerity. The band is first tier … END_OF_DOCUMENT_TOKEN_TO_BE_REPLACED

Muriel Grossmann- Reverence Muriel Grossmann continues her quest for musical ascension on Reverence, which was released on vinyl in early December, 2019 on the RR Gems label as a 2 LP set. The compositions are Grossmann’s, and the band is much the same as the group of seasoned musicians with whom she has worked for some time (and detailed in the review of her Golden Rule), but for one notable exception: the addition of a keyboard player who brings that rich, woody Hammond B-3 sound to a series of compositions devoted to Africa. In some ways, Ms. Grossmann’s exploration of the roots of jazz deliberately eschews any superficial attempt to make African music. Instead, she draws inspiration from its influences, which are wide ranging and deep—you can hear rhythm and blues sounds mixed with more traditional African instrumentation and polyrhythms and come away with something that is both … END_OF_DOCUMENT_TOKEN_TO_BE_REPLACED

Stylus Life- StylusTimer Stylus life is a recurring question in audio discussions. Some serious attention was devoted to the subject here, in Mike Bodell’s “The Finish Line for Your Phono Stylus.” That article examined the issue from a number of perspectives, including early studies, claims by cartridge manufacturers and real-life experiences by users. It also generated a long, interesting thread on the Steve Hoffman forum that is worthwhile to read. The Hoffman thread also generated an experiment by Ray Parkhurst who documented the wear of a new stylus under certain controlled conditions, which included a microscopic examination of the stylus at various time intervals over long hours of repeated play. See https://forums.stevehoffman.tv/threads/the-finish-line-for-your-phono-cartridge-stylus-wear-by-mike-bodell.842572/#post-21292730.   Whether you lean toward more optimistic … END_OF_DOCUMENT_TOKEN_TO_BE_REPLACED

Incoming! (More Interesting Records)  An "interesting record" to me offers something unexpected, whether it is a fresh take on a recognized genre, or something that opens a new way of experiencing instruments in combination. It does not have to be "strange" or challenging to listen to; in fact, I'm a sucker for a good melodic hook and enjoy technical prowess as much as anybody, but there has got to be something "more"-- an intangible that differentiates the record from the millions of others to which we all have access.   As mentioned in a recent editorial, a lot of records come in and not all get written up. It’s not an editorial decision or any reflection of the music or sonics; I only have so much time, and I tend not to write short blurbs, but longer (some may say ‘too long’) reviews. My “incoming” piles continue to grow as I publish. This series of short capsules is meant to … END_OF_DOCUMENT_TOKEN_TO_BE_REPLACED