home
You are here: Home / Features / LLOYD MCNEILL-ASHA AND BEYOND 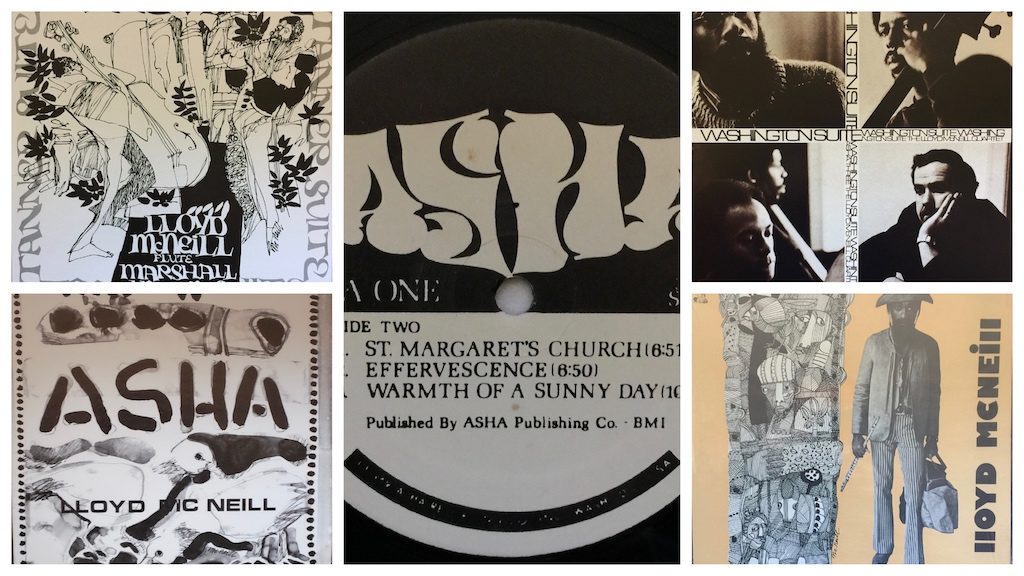 I’ve recently developed this thing for Lloyd McNeill, which started when a dealer friend of mine, Tosca Records, mentioned McNeill’s Washington Suite. What he failed to tell me was that the record was scarce, and good copies are not only hard to find, but quite pricey.

I’ve been listening to a lot of spiritual jazz lately but Washington Suite is one of the finest pieces of music I’ve heard. It was composed by McNeill for a ballet in Washington, D.C. and released on McNeill’s private label, Asha. 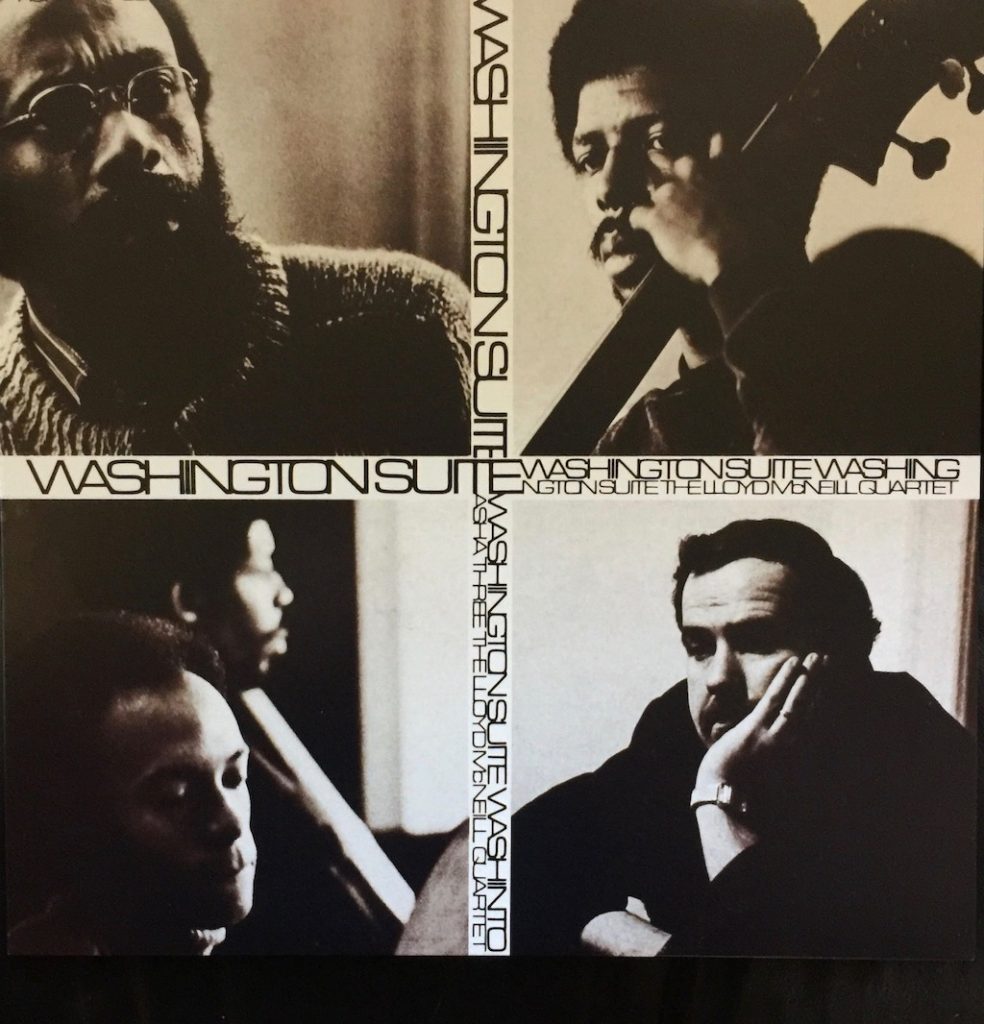 Original copies are truly scarce- not that this has deterred me from bidding on the odd copy that shows up- but until one lands here, I’ve been enjoying a copy reissued by the Soul Jazz label in London that will set you back very little. It is a needle drop—the master tape, I’m informed, is missing or lost. Soul Jazz’s affiliate, Universal Sound, had reissued the album in 2011 and that reissue is itself out of print. But, Soul Jazz tells me that the new reissue is essentially the same. 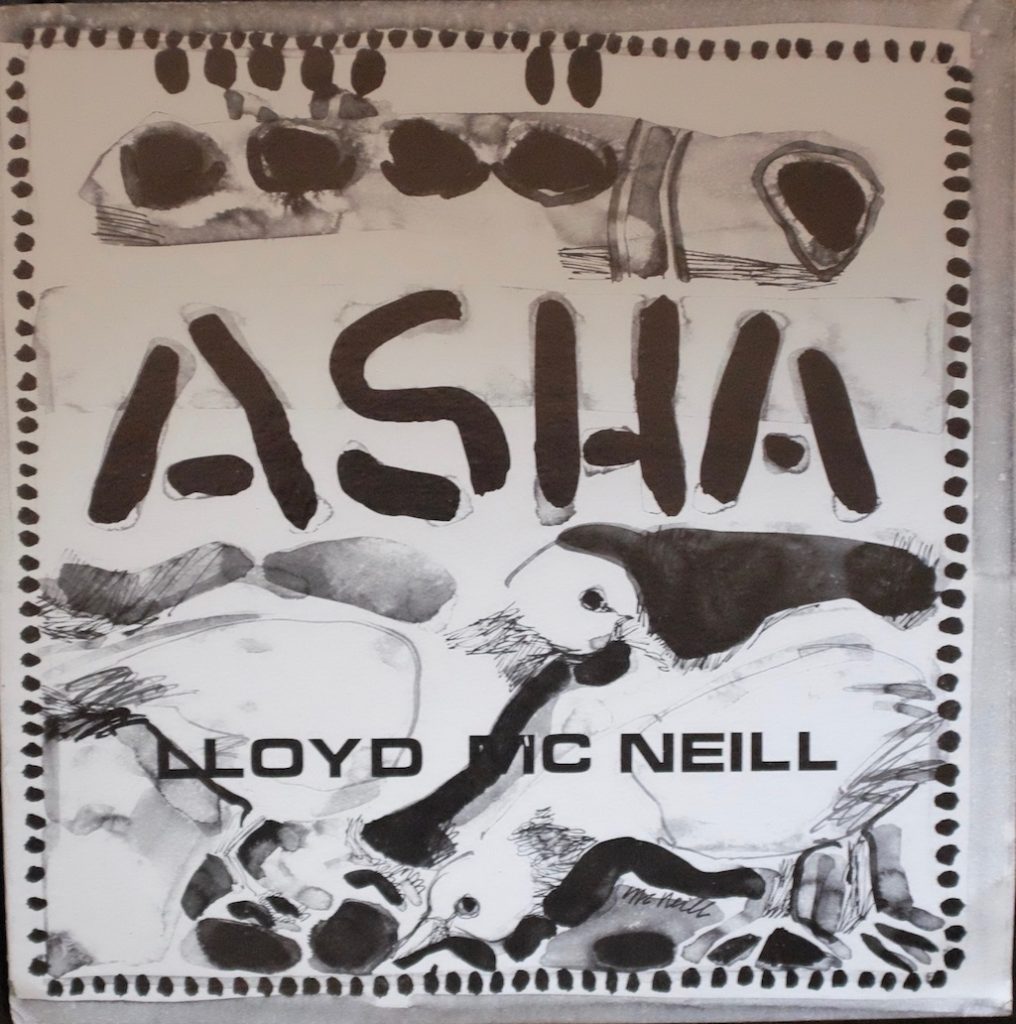 Second pressing of Asha with black and white jacket art

I did manage to score an early pressing of McNeill’s Asha from a dealer outside of Philly who bought McNeill’s remaining inventory some time ago. This record is stunning and the difference in vividness between the early pressings taken from the tape and later reissues is unmistakable.

My copy is actually a second issue, but it was done under McNeill’s auspices, from the tapes, and has different artwork (also by McNeill) than the first pressings. 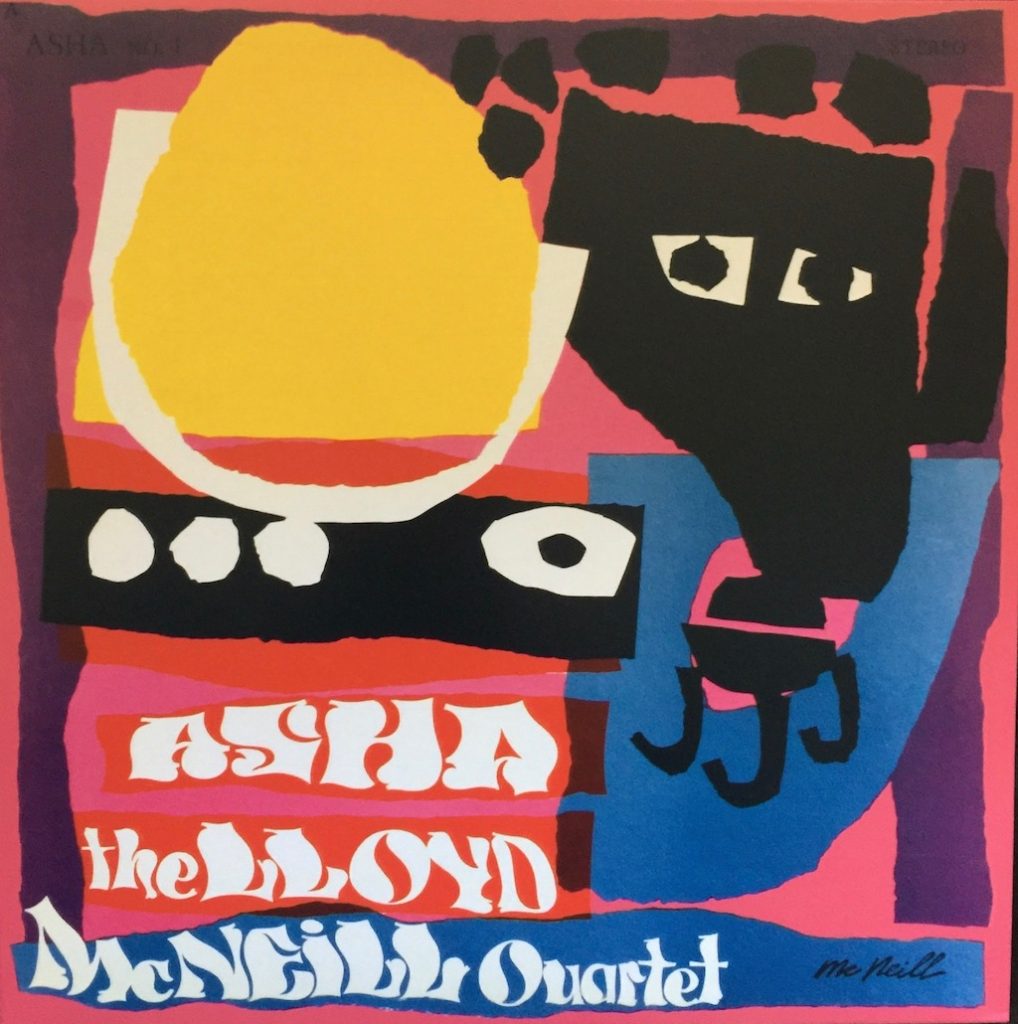 It also has an indication on the back of the jacket that it is a reissue. 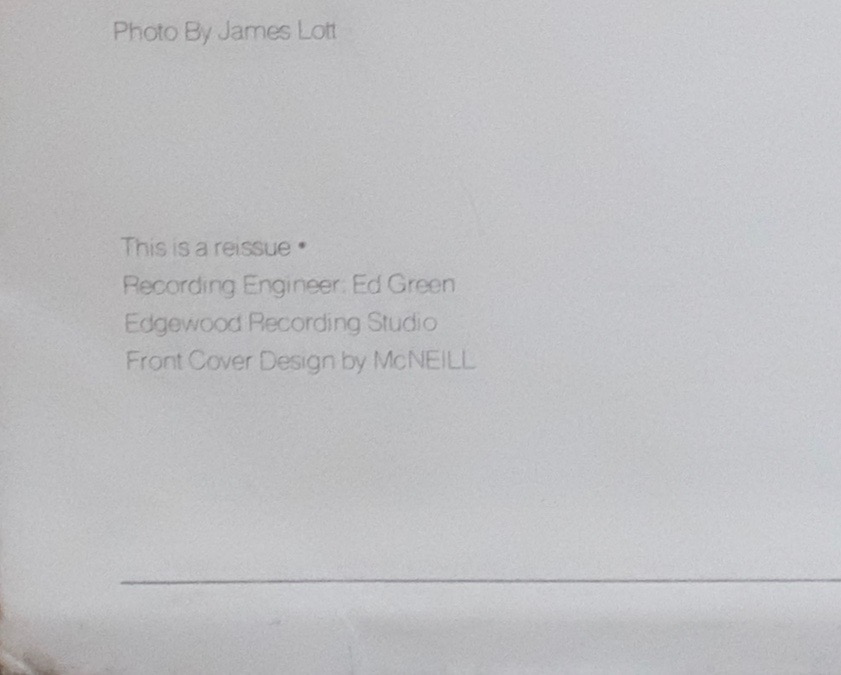 At the same time I bought Asha, I picked up a couple of later McNeill records from the same dealer[1]: 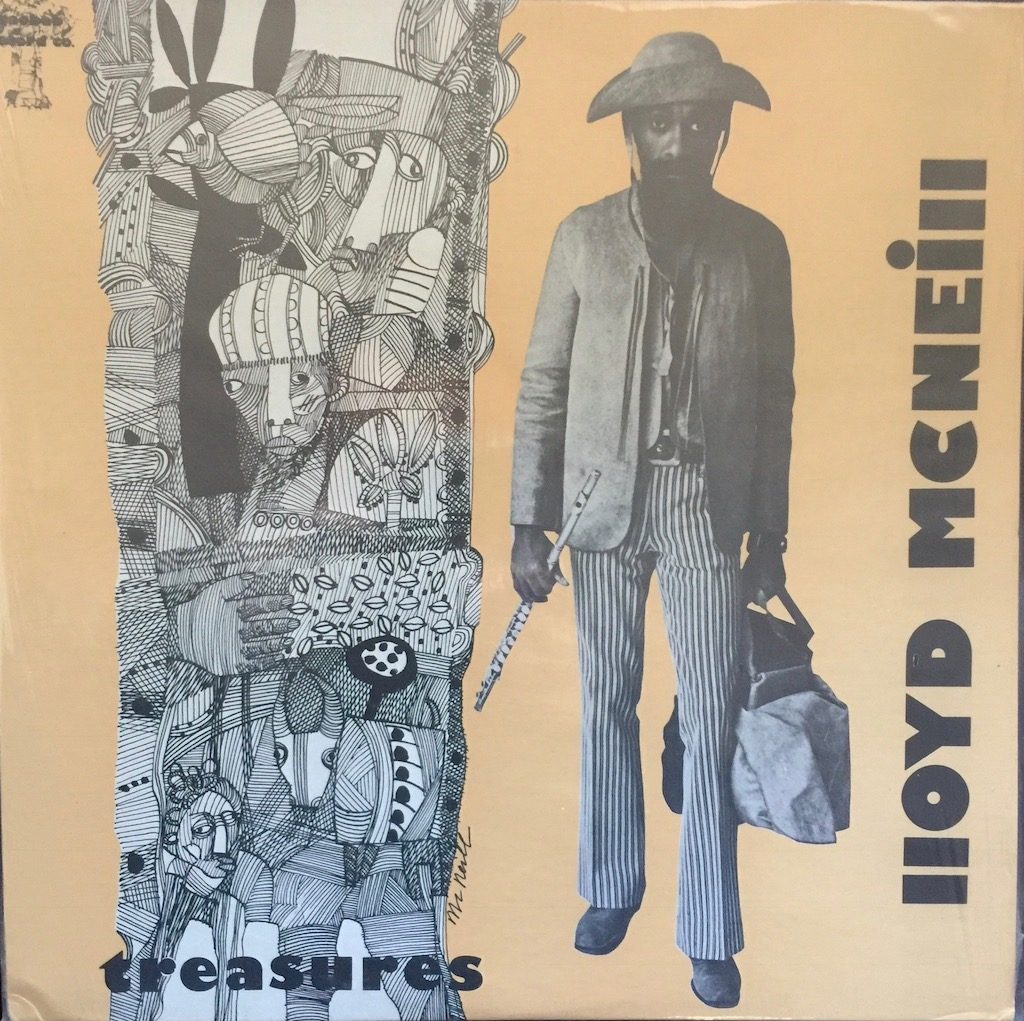 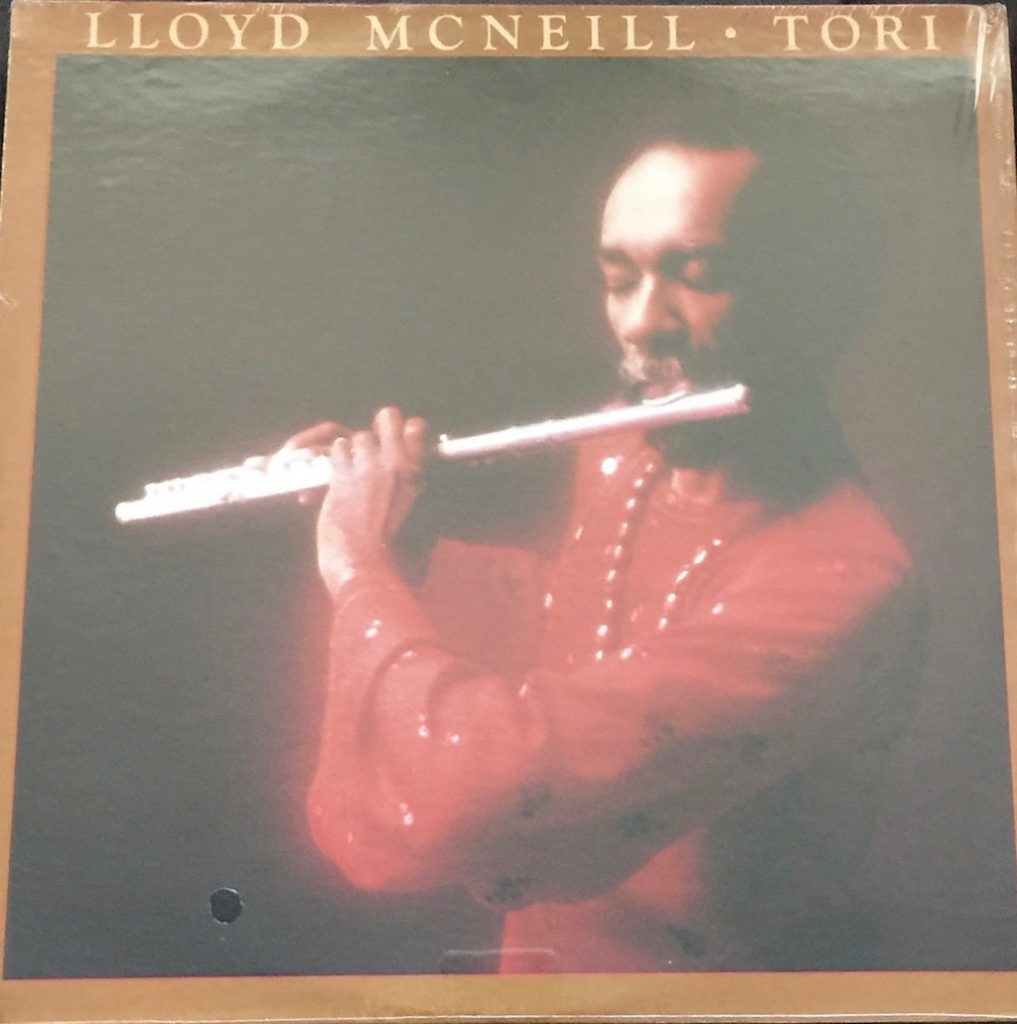 The one I’m still chasing, apart from Washington Suite is a collaboration with Marshall Hawkins called Tanner Suite, recorded live at the National Collection of Fine Arts in honor of African American artist Henry Ossawa Tanner during an exhibition at the Smithsonian of Tanner’s work. 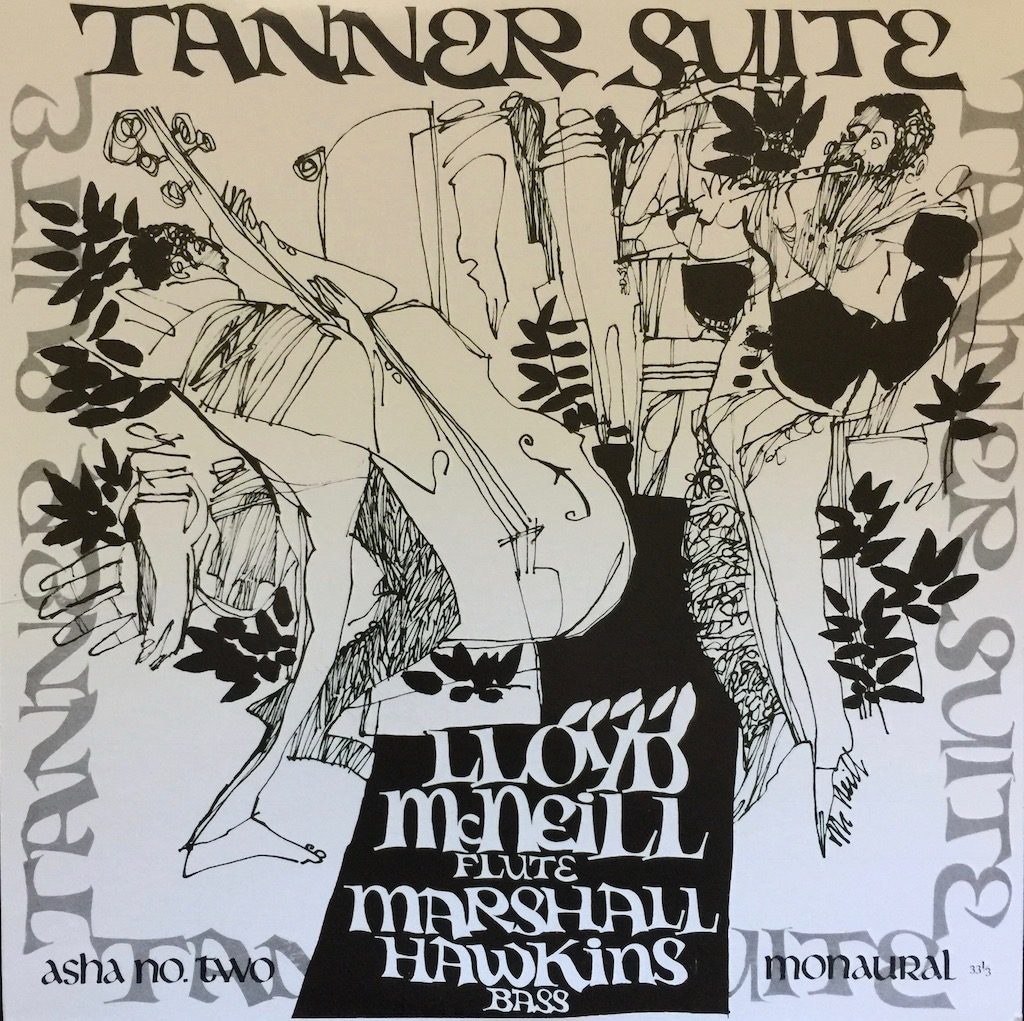 That record has also been reissued by Soul Jazz and is also a needle drop.

Among the Soul Jazz reissues, I think Tanner Suite may be the winner- perhaps because it is the rarest, and given that it is a mono recording, less seems to be lost in translation on the reissue. I do know that you’ll spend a lot of money and a fair amount of time finding good copies of any of the early Lloyd McNeill records on the Asha label, so the Soul Jazz records make good placeholders, at a minimum. They are inexpensive and have good surfaces.

McNeill is an interesting man: he studied at the Ecole Des Beaux Arts in Paris, was friends with Picasso and is a painter and poet as well as a flutist. He went on to help establish the Jazz Studies Program at Rutgers University. Mr. McNeill’s discography extends beyond the albums mentioned here and includes other records where he is either the featured artist or a performer.

This is more of an introduction than a review—yet another body of work by a creative genius whose art I have only recently discovered. McNeill maintains a website largely devoted to his visual art, and refers visitors to the Soul Jazz site for his recordings.

[1] Whose website has some additional information and photos of McNeill.

Although I don't have all the details yet, I have learned that Frederiksberg Records, a small, eclectic label from New York, is in the process of reissuing the hard to find (and even harder to pay for) jazz obscurity, Milt Ward and Virgo Spectrum. You can find out more by keeping tabs on Frederiksberg's Bandcamp page, https://frederiksbergrecords.bandcamp.com   I'm told there is a bootleg out there so be careful. Frederiksberg is doing this project with the participation of the family of Milt Ward, which is to be applauded. Hopefully, this will give more access to a great jazz record at a reasonable price. The Roots album reissue from Frederiksberg (which is sold out on vinyl on the Frederiksberg Records bandcamp site) still appears to be available through some online retailers as a pre-order, so that's another one to jump on now if you can find it-- the original is extremely pricey and … END_OF_DOCUMENT_TOKEN_TO_BE_REPLACED

Clem Snide- Forever Just Beyond With a name derived from a character in the same literary work as the band name so famously identified with the Walter Becker-Donald Fagen duo, Clem Snide has an extensive discography, typically cataloged as “alt country.” This latest release is the work of one of its founding members, Eef Barzelay, who was responsible for much of the songwriting and singing. According to his bio, Barzelay suffered some serious bumps in the road during the last decade, including a failing marriage and financial ruin. At the same time, he learned that Scott Avett was a fan and they found inspiration in each other, leading to this album- a collaboration of artistry where Avett and Barzelay share some writing credits and Avett produces. The result is a fresh, upbeat set of tunes that are appealing in their simplicity and refreshing in their sincerity. The band is first tier … END_OF_DOCUMENT_TOKEN_TO_BE_REPLACED

Muriel Grossmann- Reverence Muriel Grossmann continues her quest for musical ascension on Reverence, which was released on vinyl in early December, 2019 on the RR Gems label as a 2 LP set. The compositions are Grossmann’s, and the band is much the same as the group of seasoned musicians with whom she has worked for some time (and detailed in the review of her Golden Rule), but for one notable exception: the addition of a keyboard player who brings that rich, woody Hammond B-3 sound to a series of compositions devoted to Africa. In some ways, Ms. Grossmann’s exploration of the roots of jazz deliberately eschews any superficial attempt to make African music. Instead, she draws inspiration from its influences, which are wide ranging and deep—you can hear rhythm and blues sounds mixed with more traditional African instrumentation and polyrhythms and come away with something that is both … END_OF_DOCUMENT_TOKEN_TO_BE_REPLACED

Stylus Life- StylusTimer Stylus life is a recurring question in audio discussions. Some serious attention was devoted to the subject here, in Mike Bodell’s “The Finish Line for Your Phono Stylus.” That article examined the issue from a number of perspectives, including early studies, claims by cartridge manufacturers and real-life experiences by users. It also generated a long, interesting thread on the Steve Hoffman forum that is worthwhile to read. The Hoffman thread also generated an experiment by Ray Parkhurst who documented the wear of a new stylus under certain controlled conditions, which included a microscopic examination of the stylus at various time intervals over long hours of repeated play. See https://forums.stevehoffman.tv/threads/the-finish-line-for-your-phono-cartridge-stylus-wear-by-mike-bodell.842572/#post-21292730.   Whether you lean toward more optimistic … END_OF_DOCUMENT_TOKEN_TO_BE_REPLACED

Incoming! (More Interesting Records)  An "interesting record" to me offers something unexpected, whether it is a fresh take on a recognized genre, or something that opens a new way of experiencing instruments in combination. It does not have to be "strange" or challenging to listen to; in fact, I'm a sucker for a good melodic hook and enjoy technical prowess as much as anybody, but there has got to be something "more"-- an intangible that differentiates the record from the millions of others to which we all have access.   As mentioned in a recent editorial, a lot of records come in and not all get written up. It’s not an editorial decision or any reflection of the music or sonics; I only have so much time, and I tend not to write short blurbs, but longer (some may say ‘too long’) reviews. My “incoming” piles continue to grow as I publish. This series of short capsules is meant to … END_OF_DOCUMENT_TOKEN_TO_BE_REPLACED