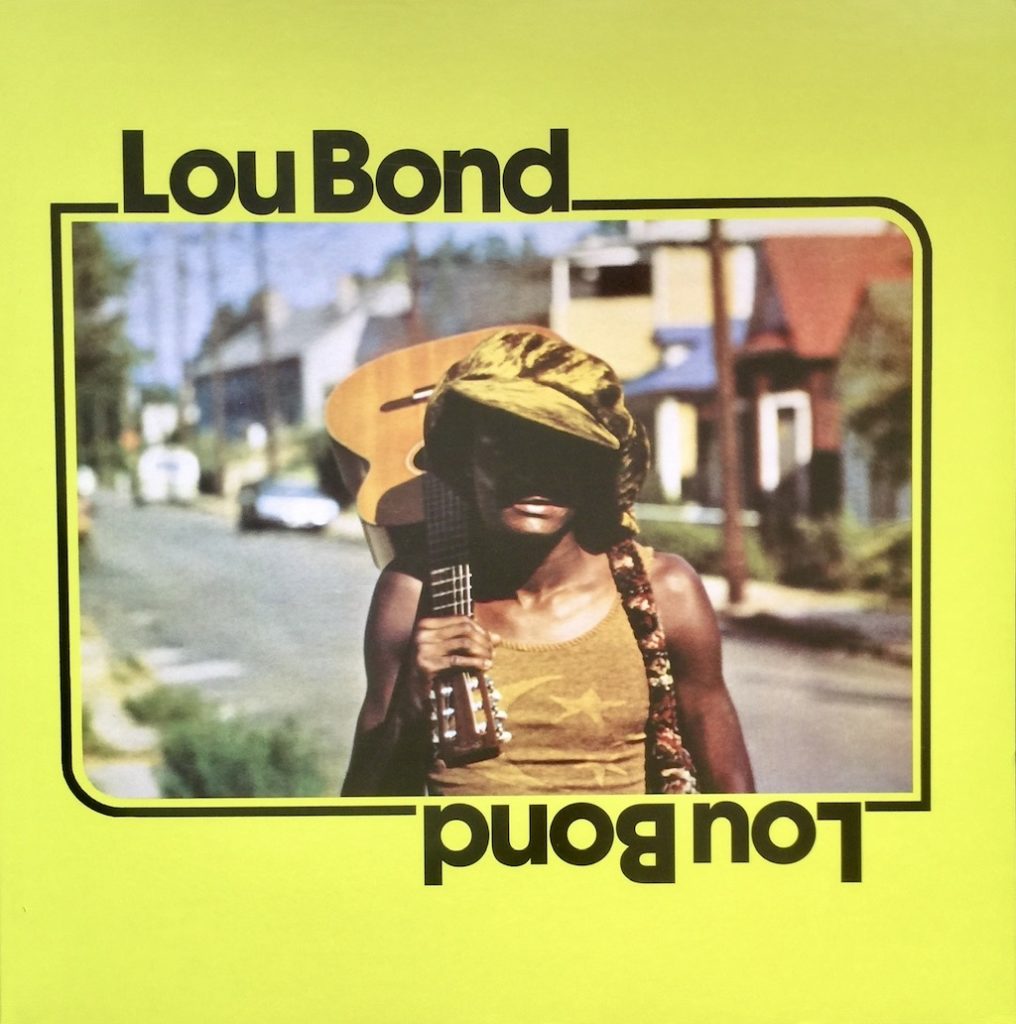 Lou Bond is an under the radar soul man whose self- titled album is a mixture of deep period soul with tinges of pop, folk and more than a few surprise covers—not exactly a mainstream soul sound. The Lou Bond album apparently got lost in the house of Stax, overshadowed by the bigger name crooners who fit more into the mold. But with the passage of time, and a sample from the album on an Outkast record, among others who tapped into the soul of this album, Lou Bond can now be appreciated for what it is. 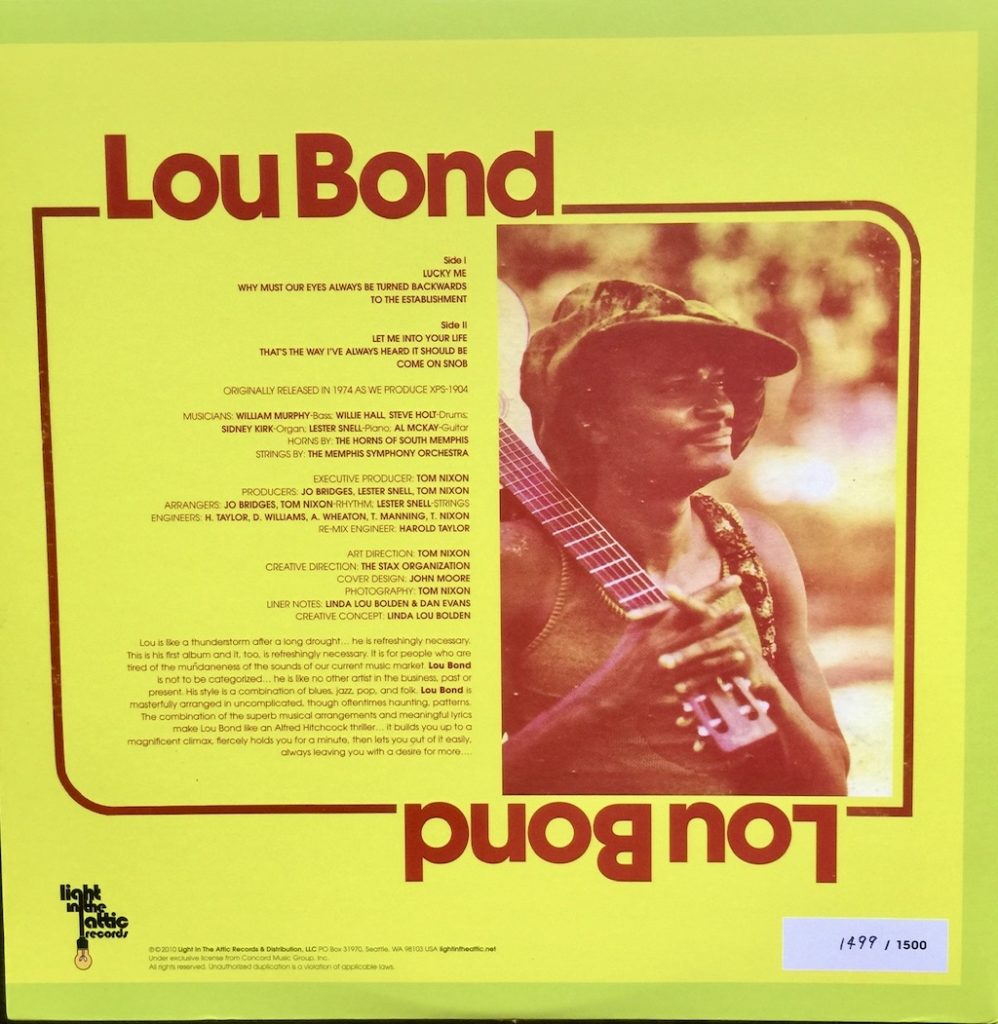 Reissued by Light in the Attic (LITA) in 2010, I found a sealed copy of Lou Bond in the secondary market that was one of the last copies made (if you believe that the numbered jackets actually reflect the order of pressings). LITA says on the hype sticker that the album was made from the original master tapes. Prices of the LITA reissue seem to be in the same ballpark as an original pressing, which I did not have to hand, though that may make for an interesting comparison (no promises). 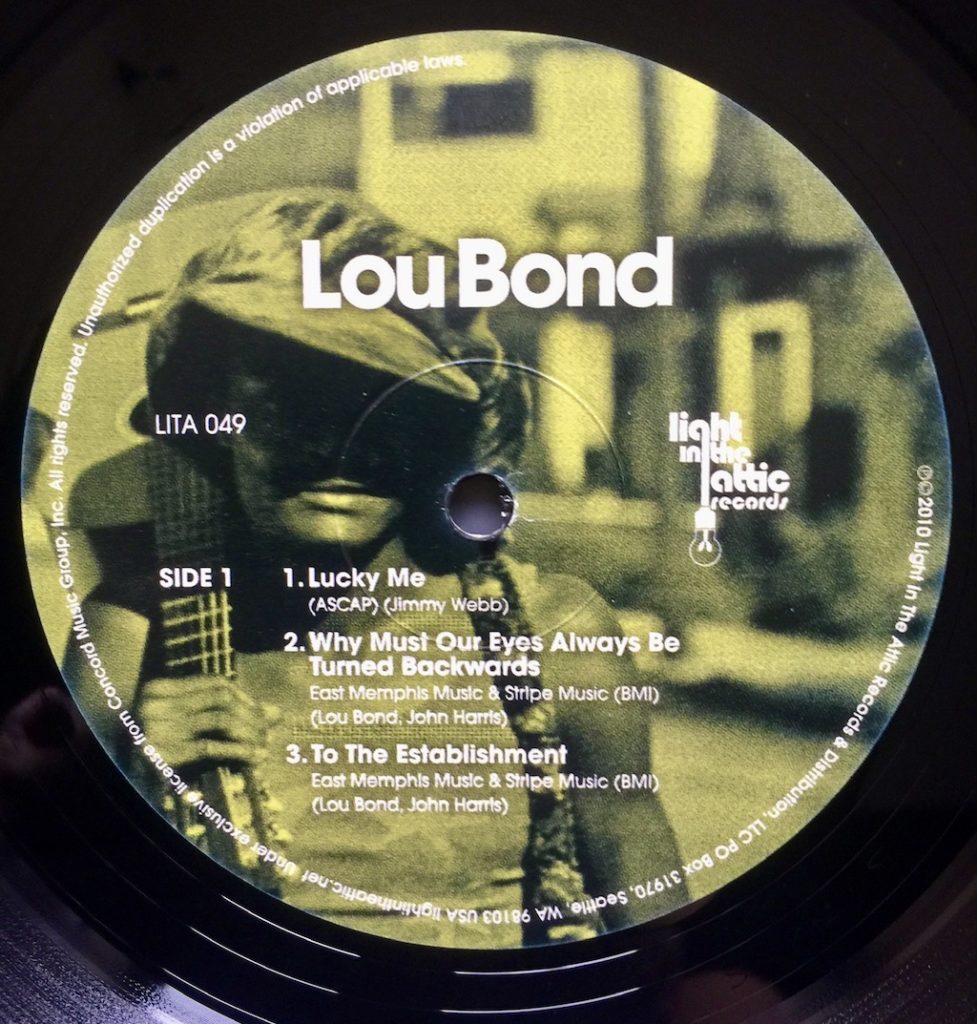 “To the Establishment” may be the best-known track from the record—no doubt due to more recent sampling by other well-known current artists, this track has every drop of that old school sound milked out of it. It’s stunning. But there’s more, some of it pretty unique for any artist, let alone a Stax-signed soul singer. Among the unusual pleasures packed into this LP (which comes with a bonus 45):

“Lucky Me,” a Jimmy Webb tune arranged as a slow soul ballad that somehow works here (Webb, as many of you know, penned some of the great Glenn Campbell tunes as well as MacArthur Park).

“Why Must Our Eyes Be Turned Backwards,” co-written by Bond and John Harris, who also co-wrote the “big” track on this album, “To the Establishment.”

“Why Must Our Eyes” is soul + a political commentary of the day—a sort of Gil Scott Heron style thing that is more Memphis than Chicago or New York and benefits from Bond’s ability to emote—this gives the next track its power.

“To the Establishment” is probably the most famous piece of Lou Bond’s music and the centerpiece of this album, though there are other gems. Listen to this track and you’ll likely buy the album—he’s not to be compared to Issac Hayes or Marvin Gaye. Lou Bond makes his own mark here and it’s a lasting one—the bass line is brilliant hitting the minor notes and changing where the flat is placed while Bond just wails over the rattle and splash of the drums, the distant echo of the horns and the sound as he intones – the result is stunningly beautiful, and soulful as hell. The string parts don’t get in the way either. (Nothing like soul grit with a full orchestra, eh?) This is the stuff, a virtuoso performance by Bond. This track should be on the list of Hall of Fame Soul performances (wherever the hell that list is kept). And it teaches you what soul is really about—not posing, not just getting a certain sound, or singing certain words, but like the much-maligned blues, emoting. This track is deep soul of the best kind, beautifully arranged and performed. No wonder some big artists years later sampled it for their albums. (I dig Outkast—their track which includes the sample is fittingly called “Wailin”).

There’s more goodness on the flip side. 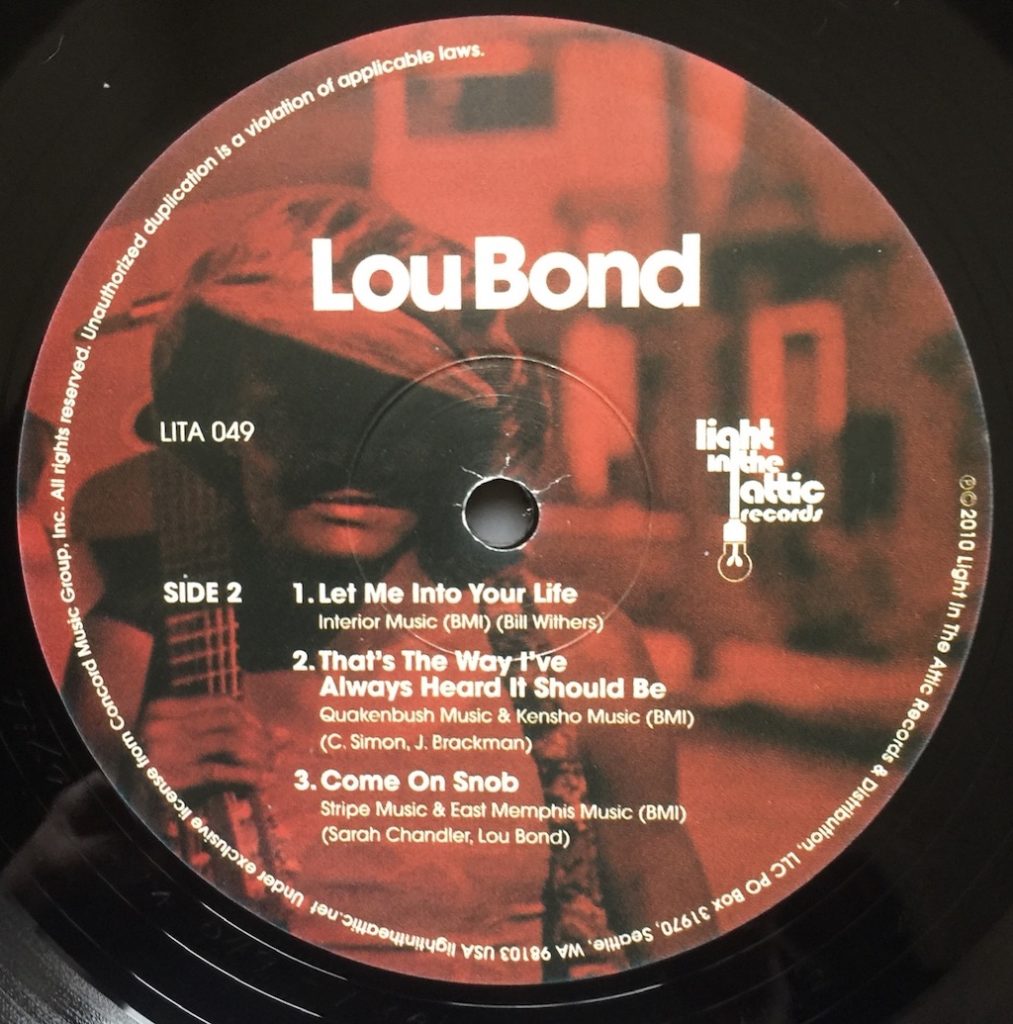 “Let Me Into Your Life”- written by the great Bill Withers. Hard to argue that one—Bill Withers was a great performer and gifted writer but Bond brings his own influence to the slow, wistful ballad.

“That’s the Way I’ve Always Heard It Should Be”- at first, I thought, bad joke, taking a Carly Simon soft rock hit (credited to Simon and Jacob Brackman who has some serious credentials, just look him up), but this isn’t a baritone version of Carly.  Bond changes the song, and if you didn’t bother to recognize its pop origins, you can appreciate the plaintive quality Bond brings to the tune. The arrangement is good too—yes,  there is a string section, but the bass and Bond’s voice dominate; the track doesn’t have a saccharine quality. It not only works but brings a different perspective to a pop confection.

The album finishes with “Come on Snob” co-written by Bond and Sarah Chandler. Bass and flute start, with strings introducing Lou’s voice in a natural way—he has real range and it shows here.

The LITA reissue also includes a bonus 45 with two tracks, “I’m For You” and “Motherless Child (Live)” which I did not listen to for the purposes of this review. (I will get to them eventually).

I like this album so much I probably will buy an original too. Lou Bond had the magic. And it’s preserved on this album.

There Is No “Magic Bullet” in Hi-Fi No Magic Solutions I’ve spent some time on the audio chat fora over the years. Many popular threads these days are devoted to cheap improvements that can be made using audiophile “tweaks” or repurposed non-audiophile products. These can be applied to isolate gear, enhance the signals or connections or otherwise address some perceived problem that, once solved, offers to raise the level of music reproduction. It’s like a cheap solution to upgrade your system: from audiophile fuses, special wires (beyond simply having a high-quality interconnect, speaker wire or power cable) and other tweaks, to contact fluids and other things that you can attach to power sources, equipment, or place in the room (bowls, various harmonizers or active resonators, noise harvesters, etc.) This is apart from room treatment, which is sui generis; that is, every situation is … END_OF_DOCUMENT_TOKEN_TO_BE_REPLACED

Milt Ward Reissue-release date May 6, 2022  Andreas Vingaard, of Frederiksberg Records, dropped me a note that the Milt Ward & Virgo Spectrum record about which much has been written here will be available on vinyl beginning on May 9, 2022. However, several promo emails today, Friday, May 6, 2022 say the record is available NOW via Bandcamp (see link below). The reissue was done with the participation of Milt Ward’s family and includes comprehensive notes in a booklet. Given the price of original pressings, this should be worthwhile even if not taken from the master tape. I plan to get a copy and we’ll do a shoot-out with my “OG” pressing. I’m sure some of you are willing to brook a little sonic compromise to get access to an otherwise very hard to find, expensive spiritual jazz rarity. At the time of this writing there is one copy on Discogs in NM condition for media for over … END_OF_DOCUMENT_TOKEN_TO_BE_REPLACED

Although I don't have all the details yet, I have learned that Frederiksberg Records, a small, eclectic label from New York, is in the process of reissuing the hard to find (and even harder to pay for) jazz obscurity, Milt Ward and Virgo Spectrum. You can find out more by keeping tabs on Frederiksberg's Bandcamp page, https://frederiksbergrecords.bandcamp.com   I'm told there is a bootleg out there so be careful. Frederiksberg is doing this project with the participation of the family of Milt Ward, which is to be applauded. Hopefully, this will give more access to a great jazz record at a reasonable price. The Roots album reissue from Frederiksberg (which is sold out on vinyl on the Frederiksberg Records bandcamp site) still appears to be available through some online retailers as a pre-order, so that's another one to jump on now if you can find it-- the original is extremely pricey and … END_OF_DOCUMENT_TOKEN_TO_BE_REPLACED

Clem Snide- Forever Just Beyond With a name derived from a character in the same literary work as the band name so famously identified with the Walter Becker-Donald Fagen duo, Clem Snide has an extensive discography, typically cataloged as “alt country.” This latest release is the work of one of its founding members, Eef Barzelay, who was responsible for much of the songwriting and singing. According to his bio, Barzelay suffered some serious bumps in the road during the last decade, including a failing marriage and financial ruin. At the same time, he learned that Scott Avett was a fan and they found inspiration in each other, leading to this album- a collaboration of artistry where Avett and Barzelay share some writing credits and Avett produces. The result is a fresh, upbeat set of tunes that are appealing in their simplicity and refreshing in their sincerity. The band is first tier … END_OF_DOCUMENT_TOKEN_TO_BE_REPLACED

Muriel Grossmann- Reverence Muriel Grossmann continues her quest for musical ascension on Reverence, which was released on vinyl in early December, 2019 on the RR Gems label as a 2 LP set. The compositions are Grossmann’s, and the band is much the same as the group of seasoned musicians with whom she has worked for some time (and detailed in the review of her Golden Rule), but for one notable exception: the addition of a keyboard player who brings that rich, woody Hammond B-3 sound to a series of compositions devoted to Africa. In some ways, Ms. Grossmann’s exploration of the roots of jazz deliberately eschews any superficial attempt to make African music. Instead, she draws inspiration from its influences, which are wide ranging and deep—you can hear rhythm and blues sounds mixed with more traditional African instrumentation and polyrhythms and come away with something that is both … END_OF_DOCUMENT_TOKEN_TO_BE_REPLACED