home
You are here: Home / Records / Too Much-s/t 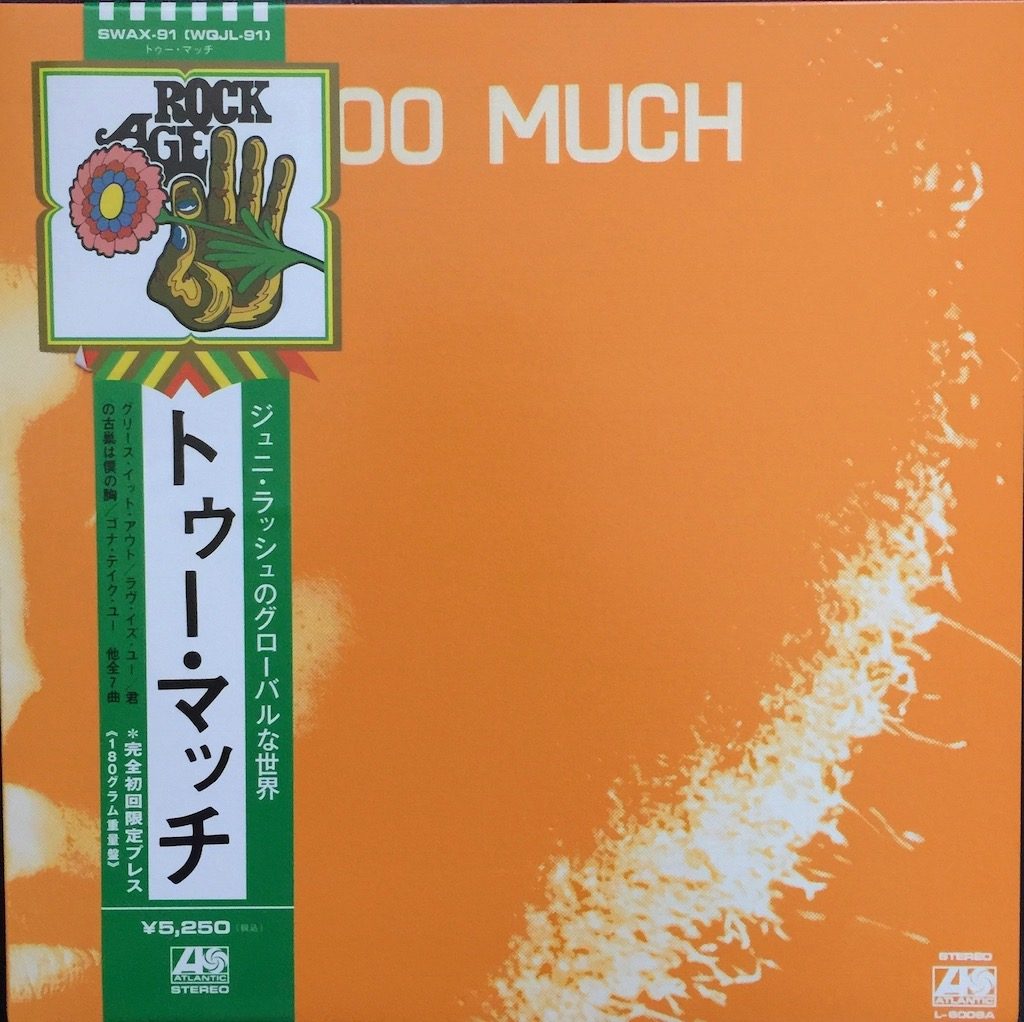 Too Much, by the band of the same name, is a pretty rare Japanese psych record with English lyrics issued in Japan by Atlantic in 1971. Critics have rightly dismissed it because it contains some tracks that should never have been included: a cover of Dylan’s “I Shall Be Released” and some long form prog that winds up the end of side two. But for heavy rock fans, the other tracks, including “Grease it Out” more than make up for those transgressions.

Original pressings are scarce; Warner Japan reissued the album in 2011, and again in 2016. I recently acquired a copy of the 2016 pressing. It is good sounding for a psych/fuzz/heavy rock record and can be cranked up to pretty prodigious levels without ear bleed. There is one track, “Love That Binds Me” that channels Zep’s “Since I’ve Been Loving You.” Depending on the pressing of your Zep III, this one may sound better purely as a matter of sonics.[1] “Love is You” is another hard driving “heavy” rock track, with a boogie meets proto-metal quality- it doesn’t cut new ground, but if you like Zeppy- Sabbath, it more than passes muster. 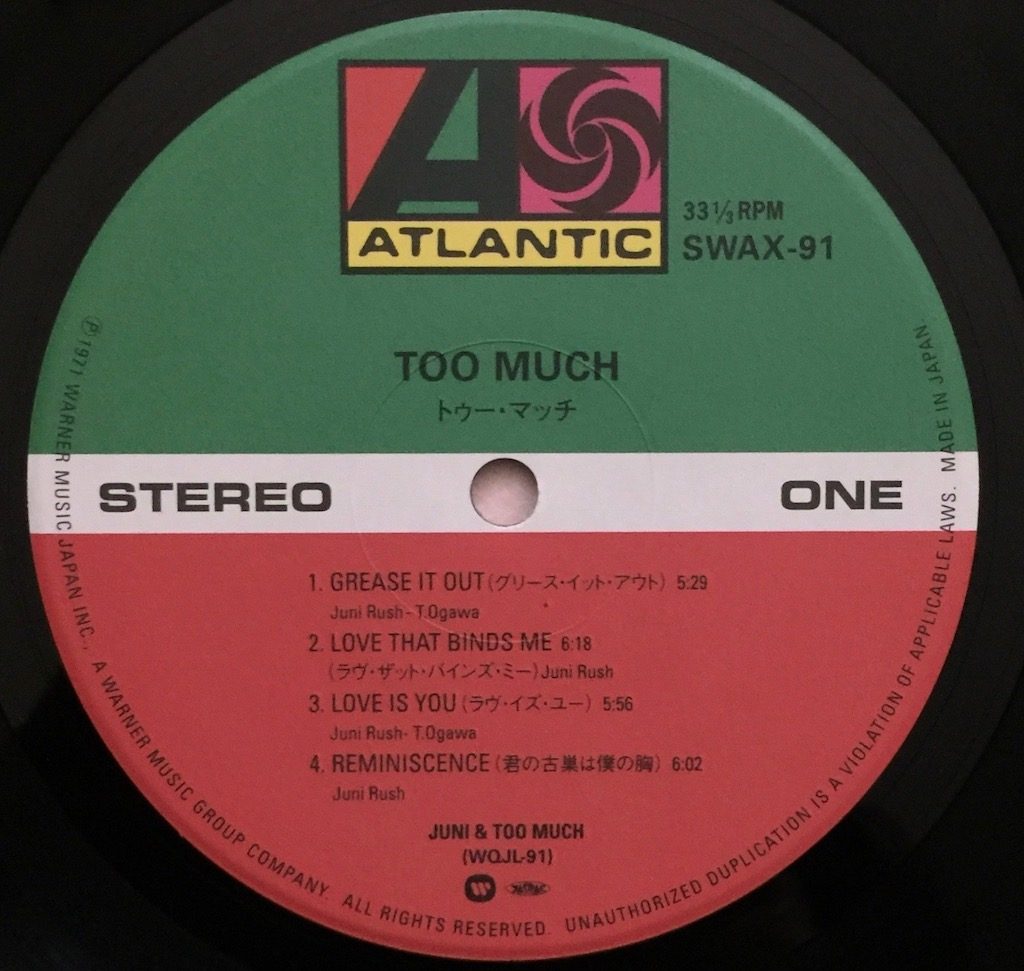 “Reminiscence,” which finishes side one, opens with bursts of noise, leading into a guitar singing blues, but transitions into more of a ballad, vocals front and center, keyboard fills and a nice pick up riff by the bass. Part of the chorus reminds me of some of the great Vertigo prog stuff. Guitar breaks out for lead, dirty and weeping, then back to the ballad for another cycle. Guitar cranks up again for lead- more dirty licks, played well—I’m not a big shredding fan, a “less is more” listener when it comes to electric guitar lead parts. This works.

Side one, though a little uneven, acquits itself well, and is a solid hard psych rock entry. There are even some inspired moments of hard driving rock that may make you want to reach for this album on occasion. Side two is an altogether different matter, though. 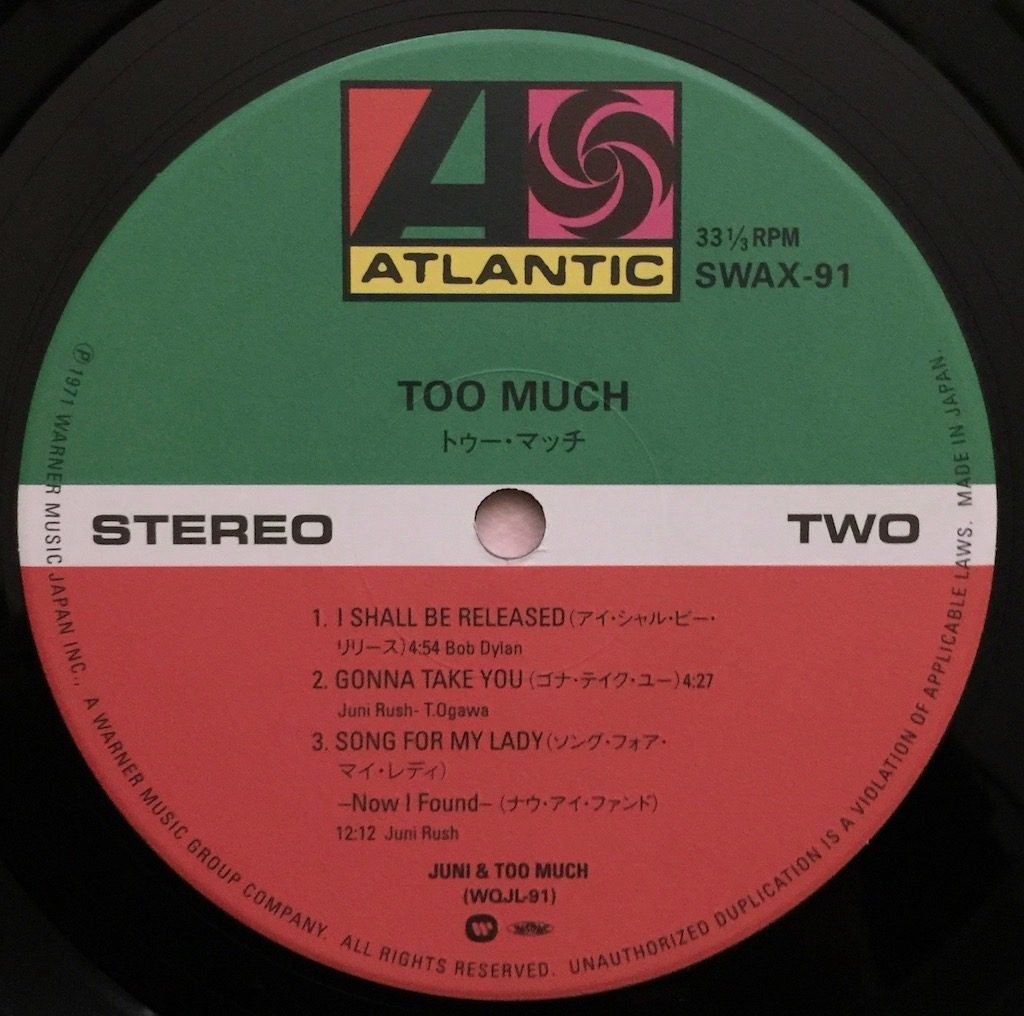 Side two opens with the Dylan track, which is completely unnecessary, and contrary to the spirit of the record; these guys aren’t bad players, but I’d rather hear The Band. The recording quality is excellent on this track, but the band’s talent is really wasted here.

“Gonna Take You”- we enter into some heavy guitar riff driven territory here- and I can see why the band was sometimes referred to as the Japanese “Black Sabbath.” It works. Do we really need this? Maybe not. But if you like this style of music, and want to hear something else for a change- same but different- this might scratch the itch. It is also nicely presented on this record- for all I know this was derived from a digital transfer, but it doesn’t suffer from any nasties, and while it isn’t quite as bass- heavy as the early Sabbath UK Swirls, it should please all but the most discriminating listeners of proto-metal.

The prog piece, “Song for My Lady,” finishes side two.

It has typical long form prog elements — starting with an acoustic opening not unlike something from the first Crimson album. The singer, however, is no Greg Lake. But then, few were. This isn’t a bad piece of music; it is well played and recorded (though on occasion sounds a tad bright, but not strident). It doesn’t annoy me as it does some critics, like the redoubtable Julian Cope,[2] but the remainder of the side could be put to far better use.

The band seems far better at straightforward heavy psych rock-those are the tracks that shine here. I wouldn’t recommend paying a lot of money for an original pressing, but the 2016 issue is worth seeking out if you are into early hard psych rock/pre-metal, Japanese style. My copy has nice surfaces and no sonic artifacts or gremlins. Pretty nice packaging too, for whatever that is worth. Call this a non-essential, fun listen that you may come back to, much in the same way I savor Lucifer’s Friend (which is ultimately a far more consistent record, musically). Many later bands rode this train to success with a similar sound; this is fresh, if not entirely original, but it is authentically of the period. Less a “must buy” than a curiosity piece, with some good heavy psych.

[1] Most of the Zep albums are pretty bad recordings and barely worthy of the band, though I listen to them because of my affinity for early Zep. I haven’t yet tackled the whale of Led Zep on vinyl here, but have a substantial pile of Zep pressings to select from and if sufficiently motivated may do a piece on them at some point.

[2] Cope deserves credit for his deep dive into early Japanese psych rock. His view of this album was pretty harsh though. http://www.japrocksampler.com/artists/…/too_much/

Muriel Grossmann- Reverence Muriel Grossmann continues her quest for musical ascension on Reverence, which was released on vinyl in early December, 2019 on the RR Gems label as a 2 LP set. The compositions are Grossmann’s, and the band is much the same as the group of seasoned musicians with whom she has worked for some time (and detailed in the review of her Golden Rule), but for one notable exception: the addition of a keyboard player who brings that rich, woody Hammond B-3 sound to a series of compositions devoted to Africa. In some ways, Ms. Grossmann’s exploration of the roots of jazz deliberately eschews any superficial attempt to make African music. Instead, she draws inspiration from its influences, which are wide ranging and deep—you can hear rhythm and blues sounds mixed with more traditional African instrumentation and polyrhythms and come away with something that is both … END_OF_DOCUMENT_TOKEN_TO_BE_REPLACED

Stylus Life- StylusTimer Stylus life is a recurring question in audio discussions. Some serious attention was devoted to the subject here, in Mike Bodell’s “The Finish Line for Your Phono Stylus.” That article examined the issue from a number of perspectives, including early studies, claims by cartridge manufacturers and real-life experiences by users. It also generated a long, interesting thread on the Steve Hoffman forum that is worthwhile to read. The Hoffman thread also generated an experiment by Ray Parkhurst who documented the wear of a new stylus under certain controlled conditions, which included a microscopic examination of the stylus at various time intervals over long hours of repeated play. See https://forums.stevehoffman.tv/threads/the-finish-line-for-your-phono-cartridge-stylus-wear-by-mike-bodell.842572/#post-21292730.   Whether you lean toward more optimistic … END_OF_DOCUMENT_TOKEN_TO_BE_REPLACED

Incoming! (More Interesting Records)  An "interesting record" to me offers something unexpected, whether it is a fresh take on a recognized genre, or something that opens a new way of experiencing instruments in combination. It does not have to be "strange" or challenging to listen to; in fact, I'm a sucker for a good melodic hook and enjoy technical prowess as much as anybody, but there has got to be something "more"-- an intangible that differentiates the record from the millions of others to which we all have access.   As mentioned in a recent editorial, a lot of records come in and not all get written up. It’s not an editorial decision or any reflection of the music or sonics; I only have so much time, and I tend not to write short blurbs, but longer (some may say ‘too long’) reviews. My “incoming” piles continue to grow as I publish. This series of short capsules is meant to … END_OF_DOCUMENT_TOKEN_TO_BE_REPLACED

More on Milt Ward and Virgo Spectrum Courtesy of Bill Pierce, the former Chair of Woodwinds at Berklee. Pierce worked with Milt Ward in the late ‘60s, including a stint as part of the horn section for Stevie Wonder. Pierce figures prominently on the album, Milt Ward and Virgo Spectrum; I have added his recollections to the feature article.   (Scroll down to the bottom of the article). My thanks to Bill Pierce, whose band, the Ralph Peterson Messenger Legacy, is currently active and touring.     … END_OF_DOCUMENT_TOKEN_TO_BE_REPLACED

A Phono Bargain or Three The ever-resourceful Steve Leung (VAS) built me a Franken-Denon 103, repotted in a wooden body with a micro-ridge stylus. In my estimation, it's a phono bargain, given its performance. Wonderful tone and an advanced stylus shape. I have zero experience with stock Denon 103 cartridges, a perennial favorite among budgeteers and tweakers. This Franken-cartridge took advantage of various tweaks that have been performed by DIY'ers and retipping shops over the years-- rebodying the cartridge, using elastomers to 'pot' the cartridge motor assembly into a new body and retipping the old school conical stylus with a more modern profile. Steve did it all in one swoop for me. I didn't even have to supply the stock Denon- he sourced it and did his thing. Set up on a Kuzma 4 Point 9, which is  currently mounted on my vintage Technics SP-10, I’ve now got the vintage Quad ESL … END_OF_DOCUMENT_TOKEN_TO_BE_REPLACED