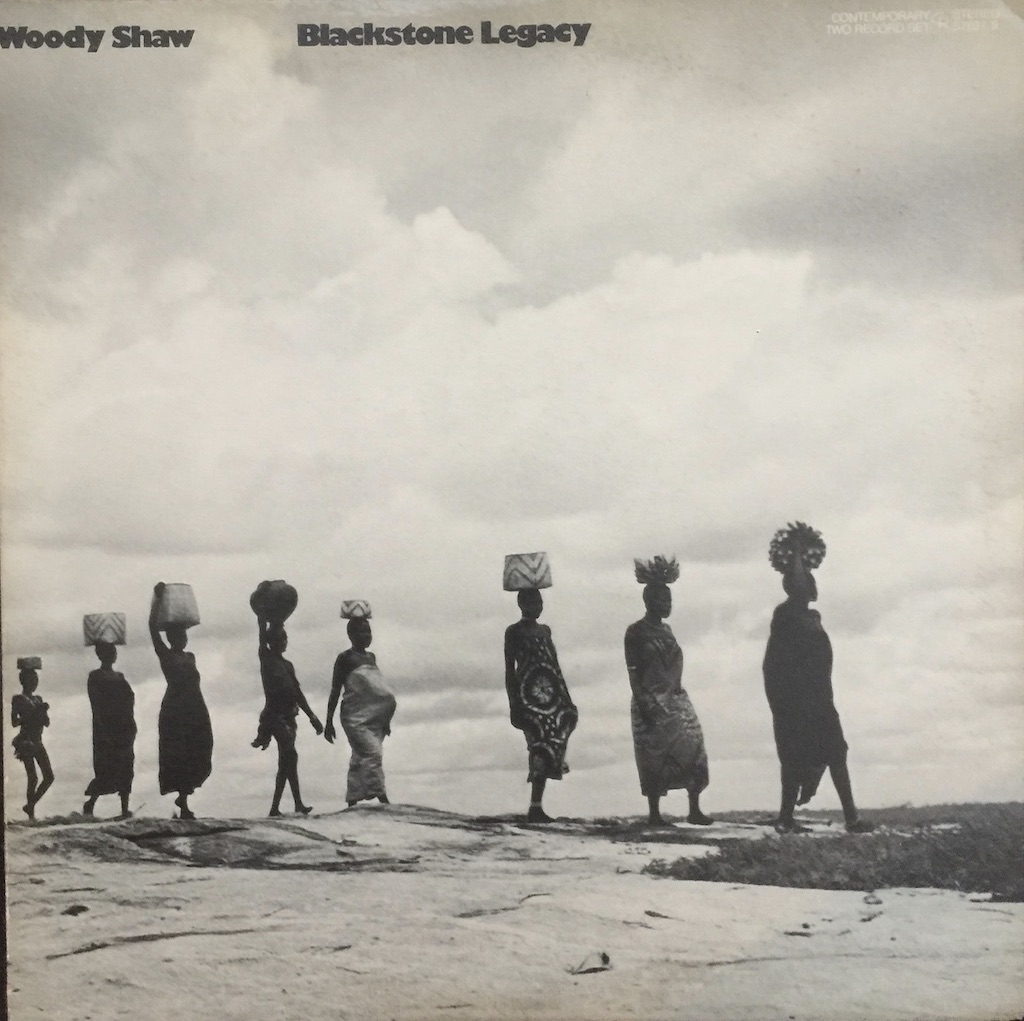 Woody Shaw’s Blackstone Legacy, his first as a featured artist released in 1971, may be one of his best. Shaw had a steady career as a sideman, working with some of the greats in Paris, including Nathan Davis (whose work after he returned to the States has been covered here), followed by a stint with Blue Note before embarking on a career as a bandleader.

After release of Blackstone Legacy, Shaw continued to work as a sideman at the same time he released a succession of albums as a featured artist. Shaw was prolific and died tragically at the age of 44, leaving a legacy of innovative performances that reflected his advanced technique. There was something very structured about his improvisation, and his influences were wide-ranging, combining African, European and mid-Eastern elements. Shaw had an impeccable playing style that demanded speed, articulation and great fluency; while technically adept, Shaw also managed to imbue his playing with soul and less conventional phrases and scales.

This album is not rare, but it is hard to find in unflawed condition. See, e.g., https://www.discogs.com/Woody-Shaw-Blackstone-Legacy/release/2478203   I had to be patient to land a good copy. The band is first rate and includes Gary Bartz, Ron Carter, Bennie Maupin and other notable players. The sound is a combination of avant-garde big band sounds combined with esoteric interludes. Most of the tracks are long, and the album takes up four sides. 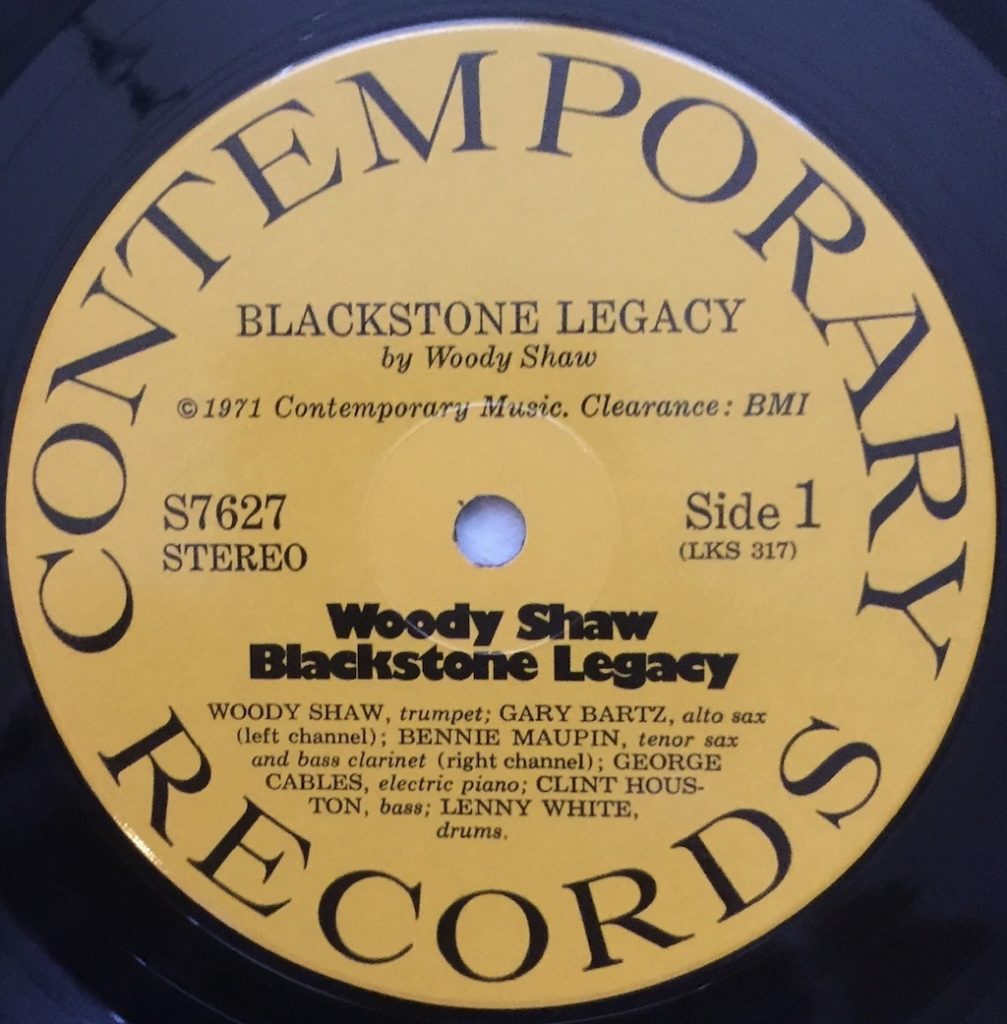 The title track starts at full tilt, with all instruments aboard, the electric piano setting up an interlude for the horns to work around. The drummer, Lenny White,  is working hard on this track. Gary Bartz’s playing is note perfect. The bass clarinet sounds are very distinctive; according to the liner notes (by Nate Hentoff), Maupin’s playing here “automatically makes him the pre-eminent bass clarinetist in jazz.” Hard to argue that one–the performance is stunning. There’s a hard driving quality to this composition that keeps it moving forward even in soft moments, when the bass is propelling the song, or when the horns aggressively attack and twist around each other. No navel gazing here- there’s an endless sense of movement. When the horns play in unison, it’s bliss. 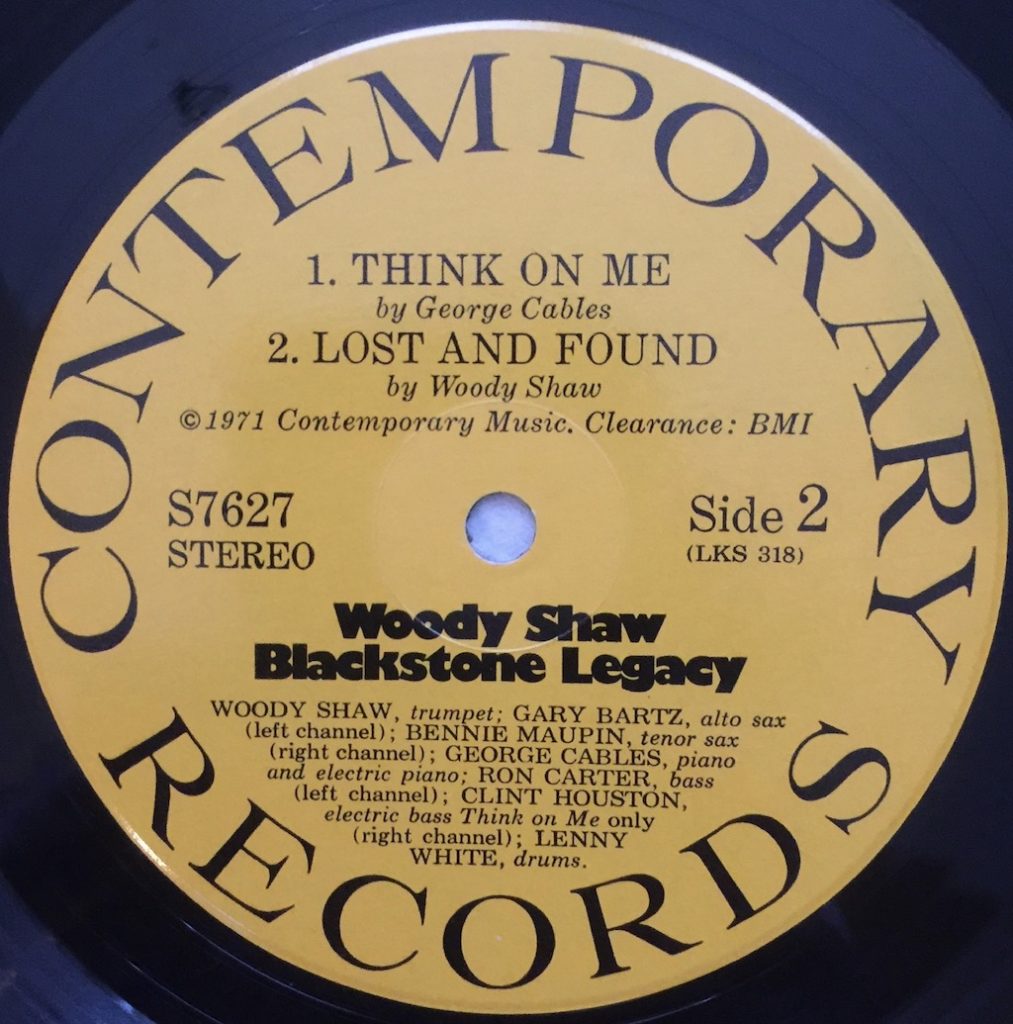 Blackstone Legacy is followed by “Think on Me,” a beautiful, somewhat conventional sounding track that depends on various solos for its outré moments, but even those are harmonious—this is something that even someone unfamiliar with more avant-garde jazz could easily take in. The piano work here by George Cables is a real groove—bluesy, jazzy, classically framed. The ending, horns sync’d together, is wonderful.

Side two finishes with “Lost and Found,” starts with a drum solo that leads to a flourish of horn playing virtuosity and then returns to the drums, only to be interrupted again by the horns, plus bass and a cool solo by Maupin that is just a killer.

Yet for all the gifted players, any one of whom could command an album’s worth of performance, it’s arranged and produced in a fairly straightforward way—impressive playing (Lenny White’s drum work is wonderful), but accessible if you have an ear for less mainstream jazz.

Do not let me mislead you into believing that this is straight-ahead material- it isn’t. But it is well within the lines-George Cables sneaks in a cool electric piano solo into “Lost and Found” and it’s a classic sound. 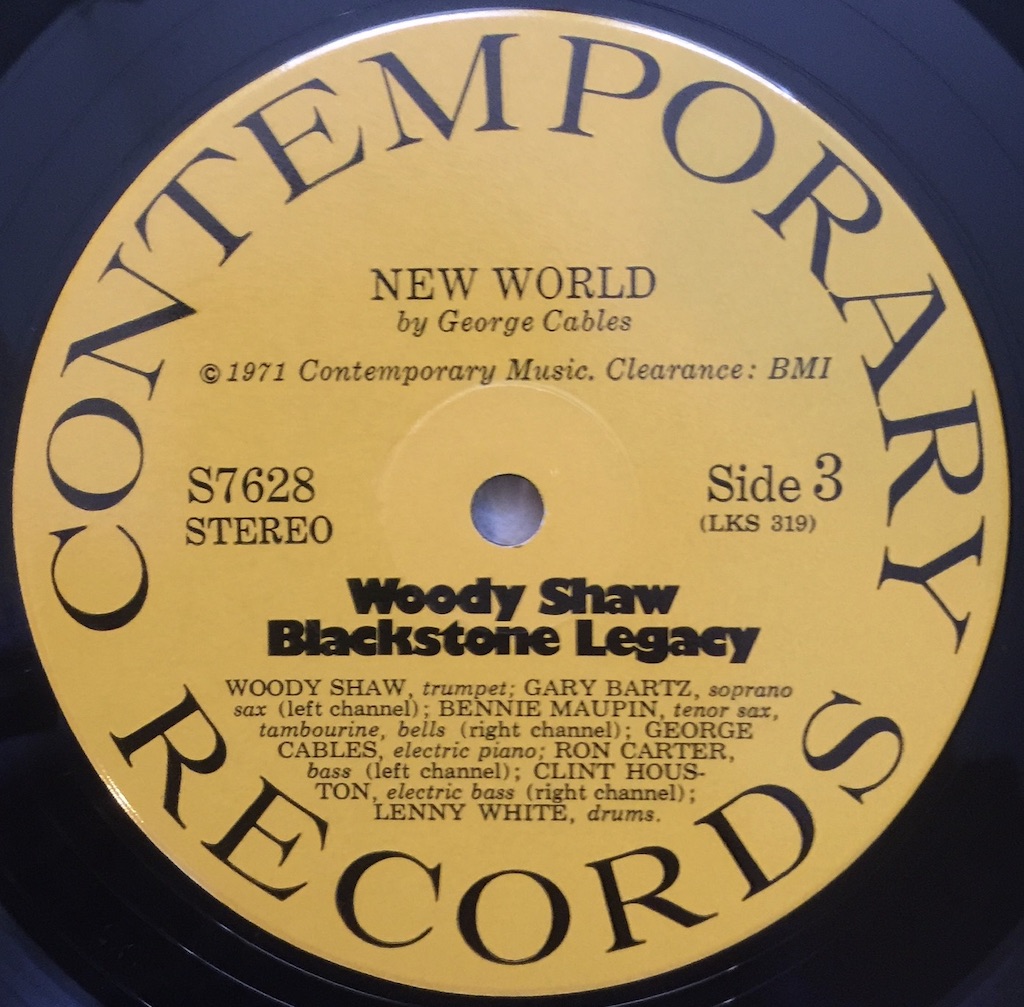 “New World” has a cool bass riff and a wah-wah psychedelic quality combined with horns playing in unison, electric piano and an outstanding solo by Bartz.

Most of the tracks use two bass players—with a couple exceptions. (Clint Houston was the other bass player with Carter- the tracks where each stepped back are identified in the liner notes).  There’s a lot going on in this record, but rather than sounding busy or cluttered, it’s like a rich feast—a sensory indulgence that never becomes excessive. 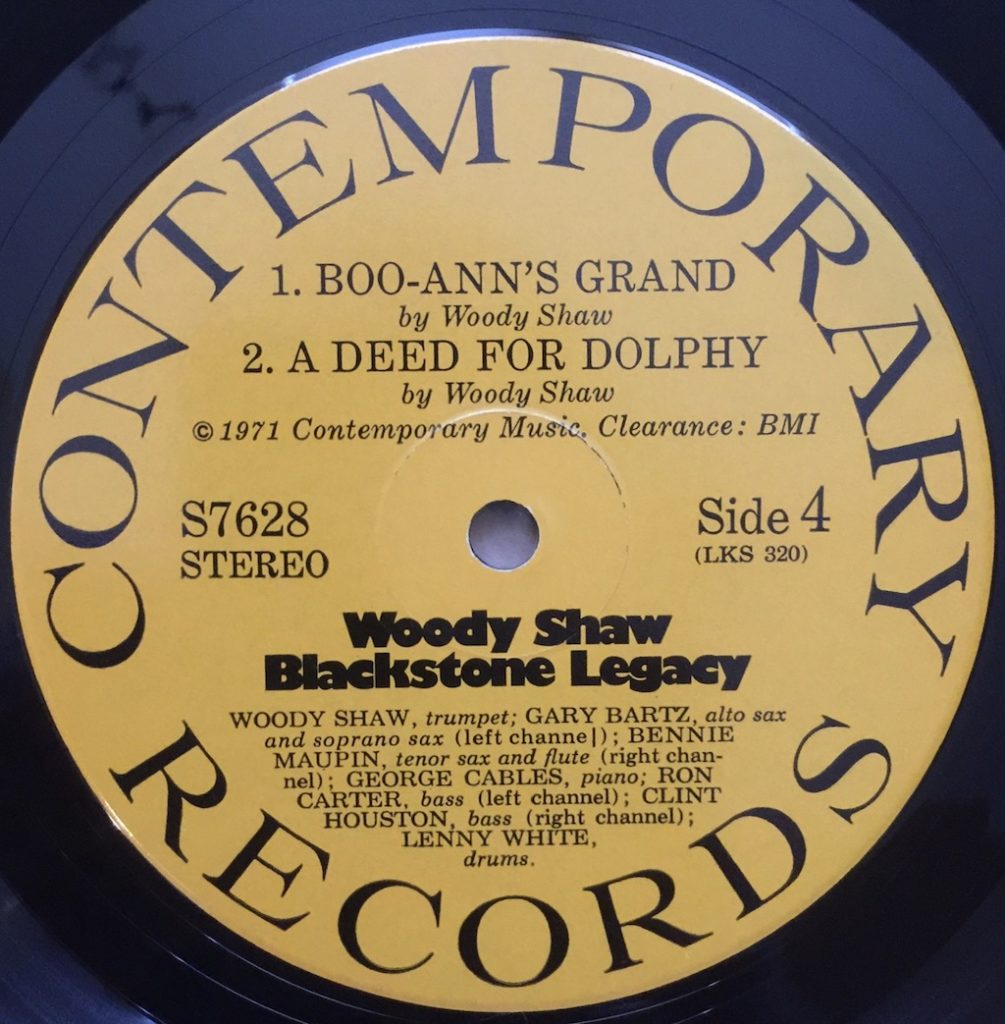 “Boo-Ann’s Grand” starts with a complete horn section at full throttle, but quickly slows and lets individual instruments develop a melody or movement within the composition—the piano playing here is sophisticated and intricate, with a classical motif—almost a study within a larger ensemble piece. It’s a very cool track. Bartz’s tonality is magnificent here. Nothing wild or edgy—just taking the lead and hitting notes that are grounded in the underlying composition, while expressing a sort of free flight unconstrained by any boundaries. This is the kind of structured improvisation I mentioned earlier.

The album ends with “A Deed for Dolphy” who has been the inspiration for so many great players. It’s a moody, darker piece, centered on the horns, with shadings of light and dark, backed by deft piano work, detailed cymbal play.  The horn work, including the flute by Maupin, is glorious.

This is a killer record, perhaps a little under-rated, and it won’t cost a fortune, but you’ll have to be patient in seeking out a clean copy. Sonically, it’s superb.

There Is No “Magic Bullet” in Hi-Fi No Magic Solutions I’ve spent some time on the audio chat fora over the years. Many popular threads these days are devoted to cheap improvements that can be made using audiophile “tweaks” or repurposed non-audiophile products. These can be applied to isolate gear, enhance the signals or connections or otherwise address some perceived problem that, once solved, offers to raise the level of music reproduction. It’s like a cheap solution to upgrade your system: from audiophile fuses, special wires (beyond simply having a high-quality interconnect, speaker wire or power cable) and other tweaks, to contact fluids and other things that you can attach to power sources, equipment, or place in the room (bowls, various harmonizers or active resonators, noise harvesters, etc.) This is apart from room treatment, which is sui generis; that is, every situation is … END_OF_DOCUMENT_TOKEN_TO_BE_REPLACED

Milt Ward Reissue-release date May 6, 2022  Andreas Vingaard, of Frederiksberg Records, dropped me a note that the Milt Ward & Virgo Spectrum record about which much has been written here will be available on vinyl beginning on May 9, 2022. However, several promo emails today, Friday, May 6, 2022 say the record is available NOW via Bandcamp (see link below). The reissue was done with the participation of Milt Ward’s family and includes comprehensive notes in a booklet. Given the price of original pressings, this should be worthwhile even if not taken from the master tape. I plan to get a copy and we’ll do a shoot-out with my “OG” pressing. I’m sure some of you are willing to brook a little sonic compromise to get access to an otherwise very hard to find, expensive spiritual jazz rarity. At the time of this writing there is one copy on Discogs in NM condition for media for over … END_OF_DOCUMENT_TOKEN_TO_BE_REPLACED

Although I don't have all the details yet, I have learned that Frederiksberg Records, a small, eclectic label from New York, is in the process of reissuing the hard to find (and even harder to pay for) jazz obscurity, Milt Ward and Virgo Spectrum. You can find out more by keeping tabs on Frederiksberg's Bandcamp page, https://frederiksbergrecords.bandcamp.com   I'm told there is a bootleg out there so be careful. Frederiksberg is doing this project with the participation of the family of Milt Ward, which is to be applauded. Hopefully, this will give more access to a great jazz record at a reasonable price. The Roots album reissue from Frederiksberg (which is sold out on vinyl on the Frederiksberg Records bandcamp site) still appears to be available through some online retailers as a pre-order, so that's another one to jump on now if you can find it-- the original is extremely pricey and … END_OF_DOCUMENT_TOKEN_TO_BE_REPLACED

Clem Snide- Forever Just Beyond With a name derived from a character in the same literary work as the band name so famously identified with the Walter Becker-Donald Fagen duo, Clem Snide has an extensive discography, typically cataloged as “alt country.” This latest release is the work of one of its founding members, Eef Barzelay, who was responsible for much of the songwriting and singing. According to his bio, Barzelay suffered some serious bumps in the road during the last decade, including a failing marriage and financial ruin. At the same time, he learned that Scott Avett was a fan and they found inspiration in each other, leading to this album- a collaboration of artistry where Avett and Barzelay share some writing credits and Avett produces. The result is a fresh, upbeat set of tunes that are appealing in their simplicity and refreshing in their sincerity. The band is first tier … END_OF_DOCUMENT_TOKEN_TO_BE_REPLACED

Muriel Grossmann- Reverence Muriel Grossmann continues her quest for musical ascension on Reverence, which was released on vinyl in early December, 2019 on the RR Gems label as a 2 LP set. The compositions are Grossmann’s, and the band is much the same as the group of seasoned musicians with whom she has worked for some time (and detailed in the review of her Golden Rule), but for one notable exception: the addition of a keyboard player who brings that rich, woody Hammond B-3 sound to a series of compositions devoted to Africa. In some ways, Ms. Grossmann’s exploration of the roots of jazz deliberately eschews any superficial attempt to make African music. Instead, she draws inspiration from its influences, which are wide ranging and deep—you can hear rhythm and blues sounds mixed with more traditional African instrumentation and polyrhythms and come away with something that is both … END_OF_DOCUMENT_TOKEN_TO_BE_REPLACED