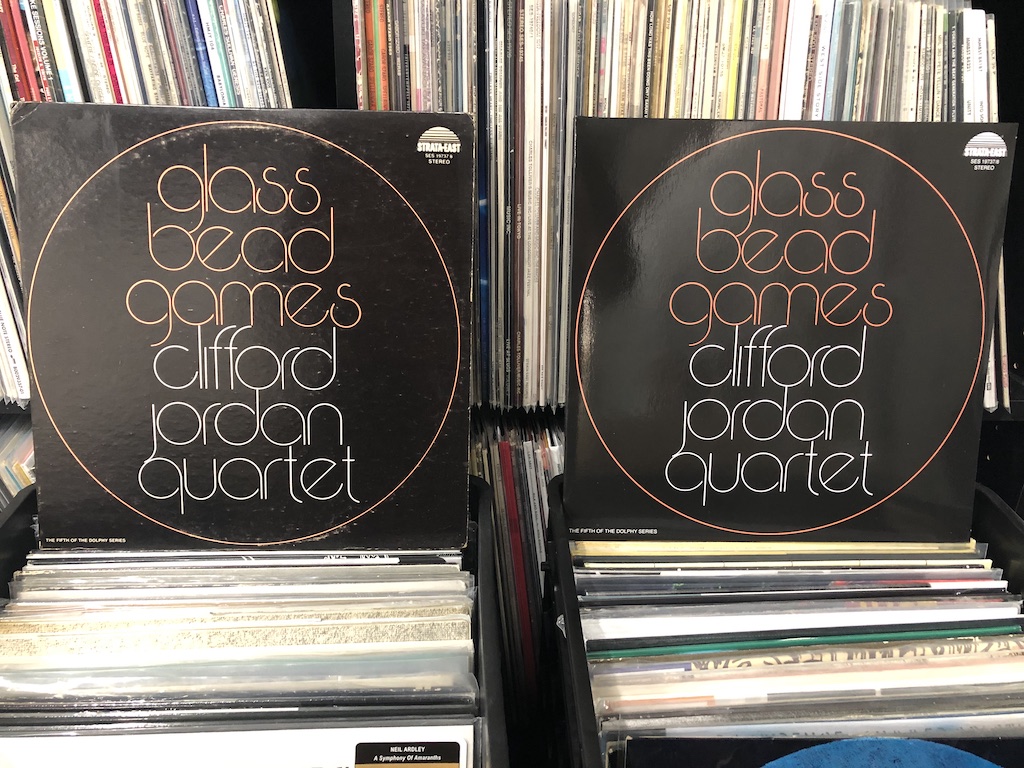 I’ve been asked by Fearless Leader to do a “shoot out” comparison between an original Strata-East pressing of Clifford Jordan Quartet “Glass Bead Games” (SES 19737/8) and the recent reissue from Pure Pleasure Records out of the UK.

Some brief background – Strata-East Records was co-founded by Charles Tolliver and Stanley Cowell.  The name was taken in tribute to the Detroit based Strata Records label.  The exclusive focus of the label was black jazz musicians.  The range of music touched on post-bop, hard bop, modal, and free jazz – typically embedded with a strong ethnic/urban flavor.  Exploration of the artists’ African heritage is a common theme.  The label has become known as the Godhead of the so-called “spiritual jazz” movement.  It wasn’t called that back in the 70s but a look in the rear-view mirror by jazz collectors and musical historians typically points to Strata-East.  Of course, there were many other labels that fit the sub-genre but that’s a story for another day. 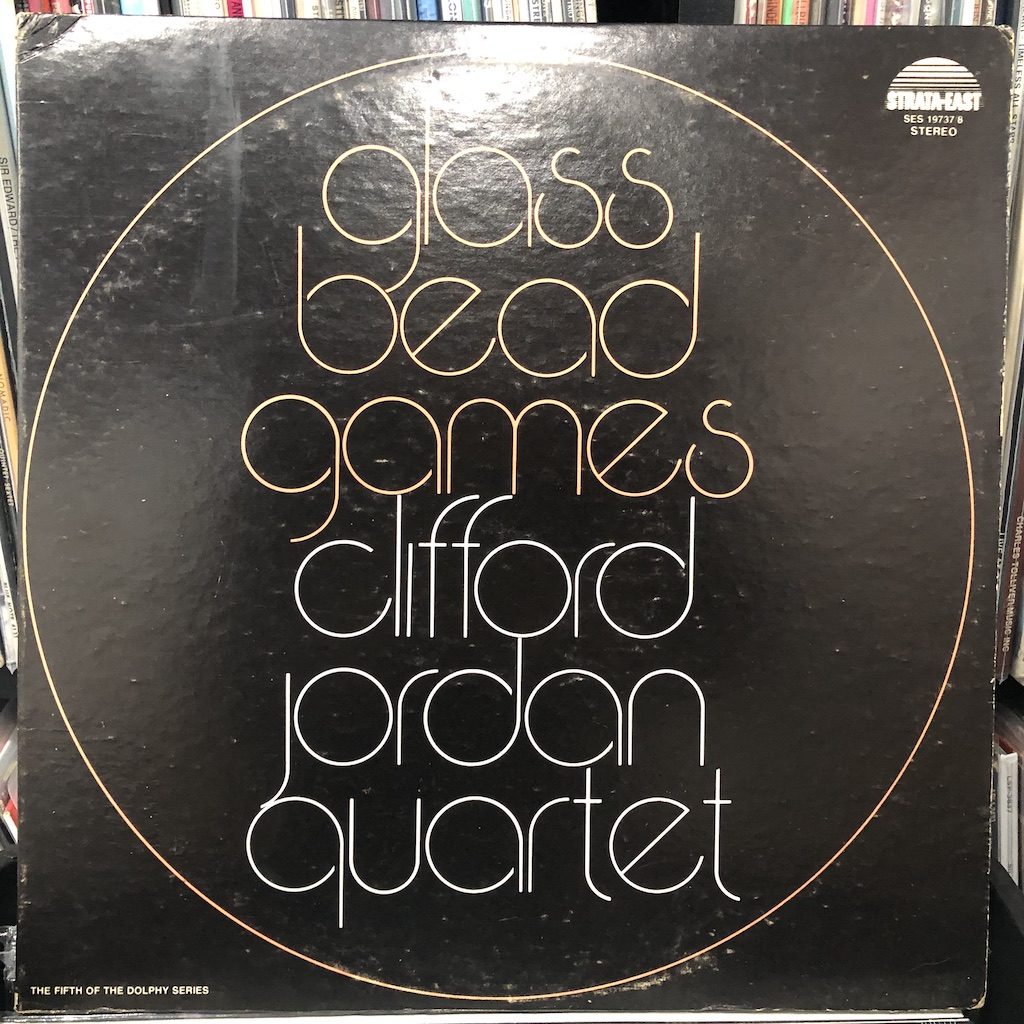 Many Strata-East albums were recorded at Minot Sound Studio in White Plains, NY.  Strata-East recordings ranged from borderline unlistenable (Music Inc. “Live At Slugs’”) to exceptional (The Heath Brothers “Marchin’ On”).  Mostly they fell right in the middle of the pack, meaning professional well recorded albums that would not deter from the listening experience.  The recordings done at Minot fit right here.

As a reissue label, Pure Pleasure does good solid work. However, something seems to have changed over the years. It is not clear what source material they are relying on for these releases.  In fact the label seems to go out of the way to cloud the issue.

They nonetheless caught lightning in a bottle with their reissues of the Strata East catalogue.  With prices of original pressings spiraling out of sight, it’s no wonder.  Pure Pleasure reissues are pressed at Pallas and use Ray Staff for mastering.  You are going to get the best out of whatever their source is….and what that source is we don’t know.

Bill’s track by track review is very detailed.  I’m not going in that direction.  By listening to both pressings twice I was able to come to an obvious conclusion that I can speak about in broad terms.

Note: all vinyl was cleaned ultrasonically.  All listening done in a pitch-black windowless room cuz that’s the way I like it.  Uh huh.

Initially I listened to the Pure Pleasure pressing.  It was dead quiet so I was able to focus on the recording.  There is reasonable bass extension from Bill Lee’s upright.  It didn’t shake my plums but I knew there was something down there.  I found the highs to be a touch rolled off and recording somewhat closed in but overall, it wasn’t a bad listening experience.  It didn’t stand out but I enjoyed what I heard.  I had my doubts the original would be an improvement.

My original pressing is surprisingly quiet.  Strata-East pressings were run of the mill.  Getting a noisy one wasn’t unusual.  I got lucky.

The difference between the two pressings becomes immediately apparent.  The original has what my audiophile/musician friend Jeff Carney calls “the breath of life”.  There is more air around the instruments.  Clifford Jordan’s sax cuts through the mix like nobody’s business.  Bill Lee and Sam Jones’ upright have more foundation.  It digs deeper and seems to be continuous throughout the album whereas I found the bass to be spotlighted just a bit in the reissue.

This is one of the best albums from the Strata-East catalogue and I found myself forgetting about the “shoot out” and just becoming more involved in the music.

A few days later I had a long-time audiophile friend over as I wanted a second set of ears.  Did I get it wrong?  Is the $50 version better or as good as the (now) $500 original?

My friend was completely unfamiliar with the album.  We went in reverse this time, leading off with the original pressing.  I started with the lead off track on side two – the iconic “John Coltrane.”  For me this is the pinnacle track on the album.  Lee’s bass line sucks you in.  Clifford Jordan’s sax work cuts through the mix with laser-like precision.  By the time the vocal chanting comes around over the bassline I’m a quivering pile of mush.  That’s the knockout punch.  We worked our way through the album hearing more of everything the Pure Pleasure pressing hinted at.

Next up was the Pure Pleasure.  We went right to “John Coltrane”.  In comparison to the original it was uninvolving from the get-go.  We carried on throughout the side; then my friend said it was obvious the reissue was inferior to the original pressing and there was no point to continue on.  I agreed.  We knew the answer.

So then a wild card emerged that might be the missing piece of the puzzle.  I happened to have the 1998 Charly Records CD reissue from Germany.  We gave it a spin.  It sounded remarkably like the Pure Pleasure release.  It led us to question whether the Pure Pleasure was sourced from the CD or whatever material the CD was mastered from.  I’m sure everyone would love for the label to spill the beans.

The album also appears in the Mosaic Records 6CD box set Clifford Jordan “The Complete Clifford Jordan Strata-East Sessions.”  I have not heard it or known what their source materials are.  In general Mosaic doing a beautiful job with their reissues.

For the casual fan who wants to simply have the music the Pure Pleasure option isn’t a bad one.  In the absence of owning an original pressing it does the job.  I was asked to compare, and I concluded that sometimes you get what you pay for – as painful to your wallet as that might be.

There Is No “Magic Bullet” in Hi-Fi No Magic Solutions I’ve spent some time on the audio chat fora over the years. Many popular threads these days are devoted to cheap improvements that can be made using audiophile “tweaks” or repurposed non-audiophile products. These can be applied to isolate gear, enhance the signals or connections or otherwise address some perceived problem that, once solved, offers to raise the level of music reproduction. It’s like a cheap solution to upgrade your system: from audiophile fuses, special wires (beyond simply having a high-quality interconnect, speaker wire or power cable) and other tweaks, to contact fluids and other things that you can attach to power sources, equipment, or place in the room (bowls, various harmonizers or active resonators, noise harvesters, etc.) This is apart from room treatment, which is sui generis; that is, every situation is … END_OF_DOCUMENT_TOKEN_TO_BE_REPLACED

Milt Ward Reissue-release date May 6, 2022  Andreas Vingaard, of Frederiksberg Records, dropped me a note that the Milt Ward & Virgo Spectrum record about which much has been written here will be available on vinyl beginning on May 9, 2022. However, several promo emails today, Friday, May 6, 2022 say the record is available NOW via Bandcamp (see link below). The reissue was done with the participation of Milt Ward’s family and includes comprehensive notes in a booklet. Given the price of original pressings, this should be worthwhile even if not taken from the master tape. I plan to get a copy and we’ll do a shoot-out with my “OG” pressing. I’m sure some of you are willing to brook a little sonic compromise to get access to an otherwise very hard to find, expensive spiritual jazz rarity. At the time of this writing there is one copy on Discogs in NM condition for media for over … END_OF_DOCUMENT_TOKEN_TO_BE_REPLACED

Although I don't have all the details yet, I have learned that Frederiksberg Records, a small, eclectic label from New York, is in the process of reissuing the hard to find (and even harder to pay for) jazz obscurity, Milt Ward and Virgo Spectrum. You can find out more by keeping tabs on Frederiksberg's Bandcamp page, https://frederiksbergrecords.bandcamp.com   I'm told there is a bootleg out there so be careful. Frederiksberg is doing this project with the participation of the family of Milt Ward, which is to be applauded. Hopefully, this will give more access to a great jazz record at a reasonable price. The Roots album reissue from Frederiksberg (which is sold out on vinyl on the Frederiksberg Records bandcamp site) still appears to be available through some online retailers as a pre-order, so that's another one to jump on now if you can find it-- the original is extremely pricey and … END_OF_DOCUMENT_TOKEN_TO_BE_REPLACED

Clem Snide- Forever Just Beyond With a name derived from a character in the same literary work as the band name so famously identified with the Walter Becker-Donald Fagen duo, Clem Snide has an extensive discography, typically cataloged as “alt country.” This latest release is the work of one of its founding members, Eef Barzelay, who was responsible for much of the songwriting and singing. According to his bio, Barzelay suffered some serious bumps in the road during the last decade, including a failing marriage and financial ruin. At the same time, he learned that Scott Avett was a fan and they found inspiration in each other, leading to this album- a collaboration of artistry where Avett and Barzelay share some writing credits and Avett produces. The result is a fresh, upbeat set of tunes that are appealing in their simplicity and refreshing in their sincerity. The band is first tier … END_OF_DOCUMENT_TOKEN_TO_BE_REPLACED

Muriel Grossmann- Reverence Muriel Grossmann continues her quest for musical ascension on Reverence, which was released on vinyl in early December, 2019 on the RR Gems label as a 2 LP set. The compositions are Grossmann’s, and the band is much the same as the group of seasoned musicians with whom she has worked for some time (and detailed in the review of her Golden Rule), but for one notable exception: the addition of a keyboard player who brings that rich, woody Hammond B-3 sound to a series of compositions devoted to Africa. In some ways, Ms. Grossmann’s exploration of the roots of jazz deliberately eschews any superficial attempt to make African music. Instead, she draws inspiration from its influences, which are wide ranging and deep—you can hear rhythm and blues sounds mixed with more traditional African instrumentation and polyrhythms and come away with something that is both … END_OF_DOCUMENT_TOKEN_TO_BE_REPLACED