home
You are here: Home / In Brief / From the Gulch to the Delta

From the Gulch to the Delta- 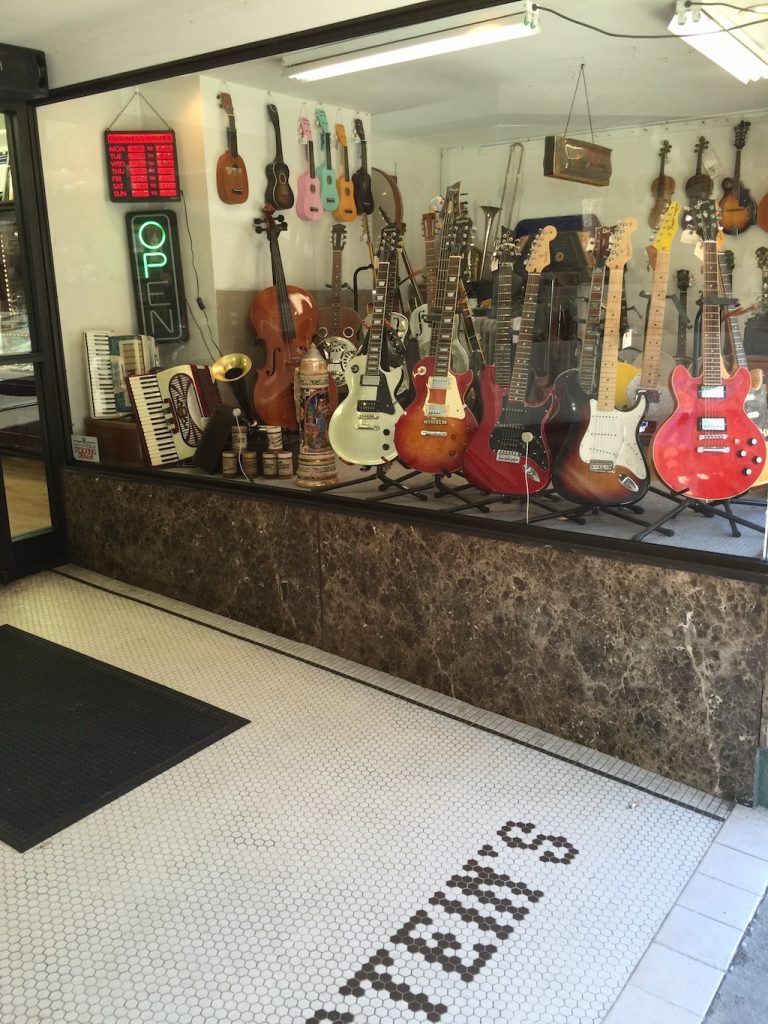 On Pawn~ in Asheville, N.C.

We are down in the Gulch, Nashville’s newest “hot” urban enclave, bubbling with fashionable boutiques and trendy nightspots. Our trip from Virginia was uneventful, if wet; the views along the higher ridges were hampered by fog. With a brief stay-over in Winston-Salem, a quiet town of old architectural gems (and one of the best café lattes ever, at a place called “The Hive”), we landed in Asheville. This is a vibrant city nestled into the Blue Ridge Mountains with the charm of the south but a distinct culture all its own. Long known as a haven for artists, we took a deep breath here and put our feet up for a few days, taking refuge in a boutique hotel in the art district called the “Windsor.” We had an amazing, and entirely unconventional, Italian meal at Cucina 24  that could best be described as a fusion between regional Italian heartiness and Asian delicacy. I’m not much for high concept or gimmicks when it comes to food— but this worked. 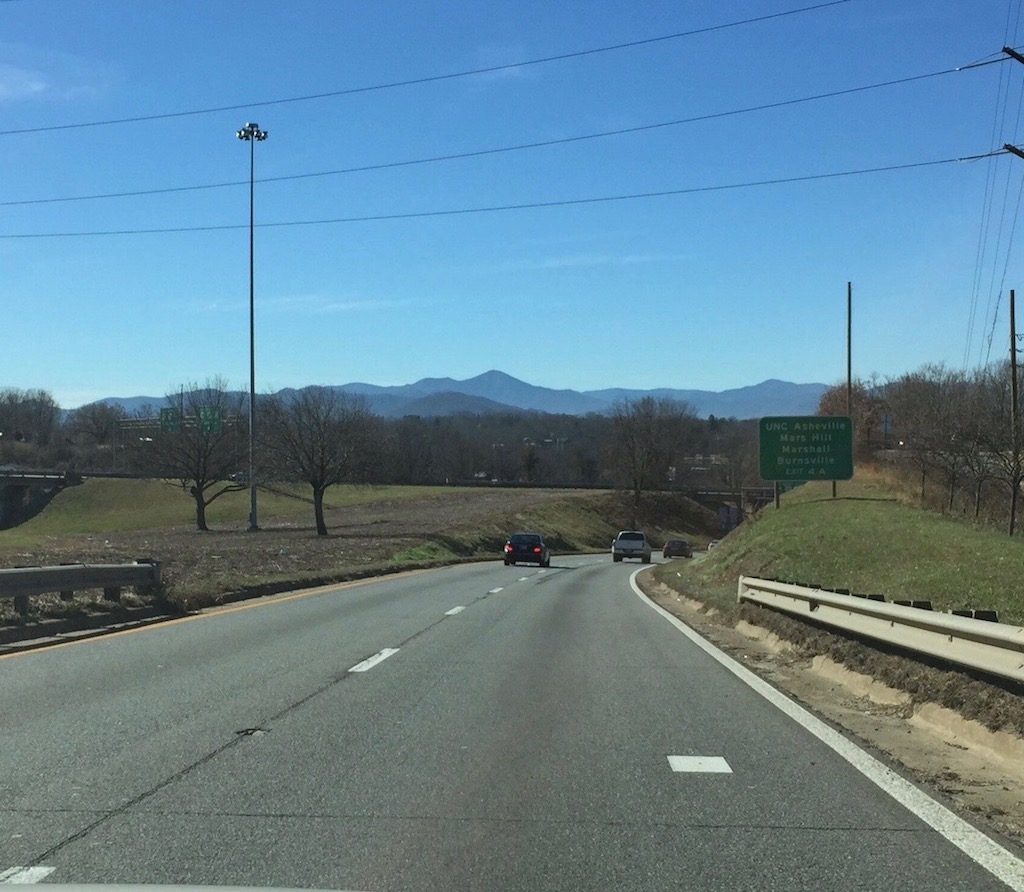 From Asheville to Nashville

Heading south into the Great Smoky Mountain region, Nashville beckoned. We arrived late in the afternoon, with enough time for a nap, a quick meal and a jaunt around town with our friend Jim Hoke. 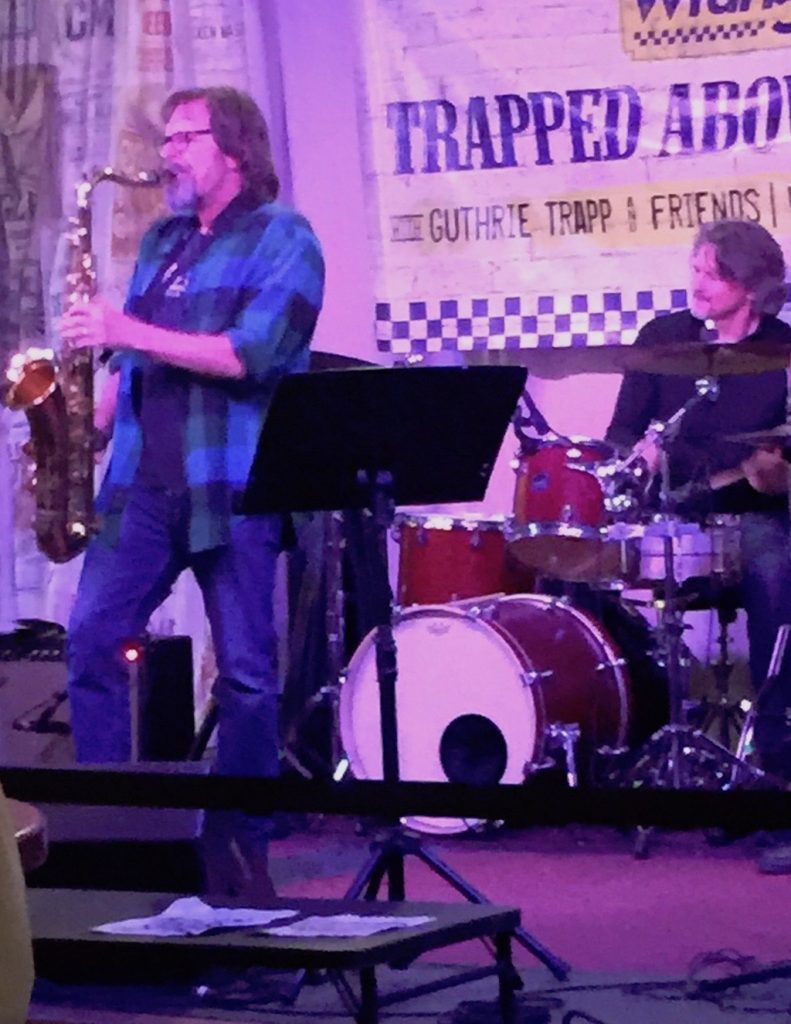 Jim, who always travels with an instrument of some sort, stopped into Acme Feed to sit in with Guthrie Trapp and his band. (Guthrie is a Telecaster-wielding monster whose range far exceeds typical twang territory; he deftly ran jazzy excursions into hard rock terrain and brought it back into the groove without breaking a sweat). Jim wove in and out on a tenor sax that added richness and a smooth urbane sound to the proceedings to the considerable delight of the audience.

Jim is a musician’s musician- sideman extraordinaire, multi-instrumentalist, arranger and longtime “Nashville cat.” The last time we visited, Jim popped into Robert’s Western World where a Bob Wills’-style swing band was on stage; there, Jim whipped out a soprano sax and they all dove into Ellington, country fiddler included. Jim’s son Austin, who studied cello under the great Janos Starker in Indiana, occasionally gets together with his father to create a sort of faux classical jazz improvisational thing. This is proof positive that there is a connection between musical talent and genetics.

Jim’s studio is a short hop from the Vanderbilt campus. We spent a delightful afternoon with Jim and his wife, Lisa, trading stories and songs. Jim also gave us a virtuoso demonstration of his latest pedal steel guitar, pulling out some sweet countrified licks along with some old school Hawaiian guitar sounds. 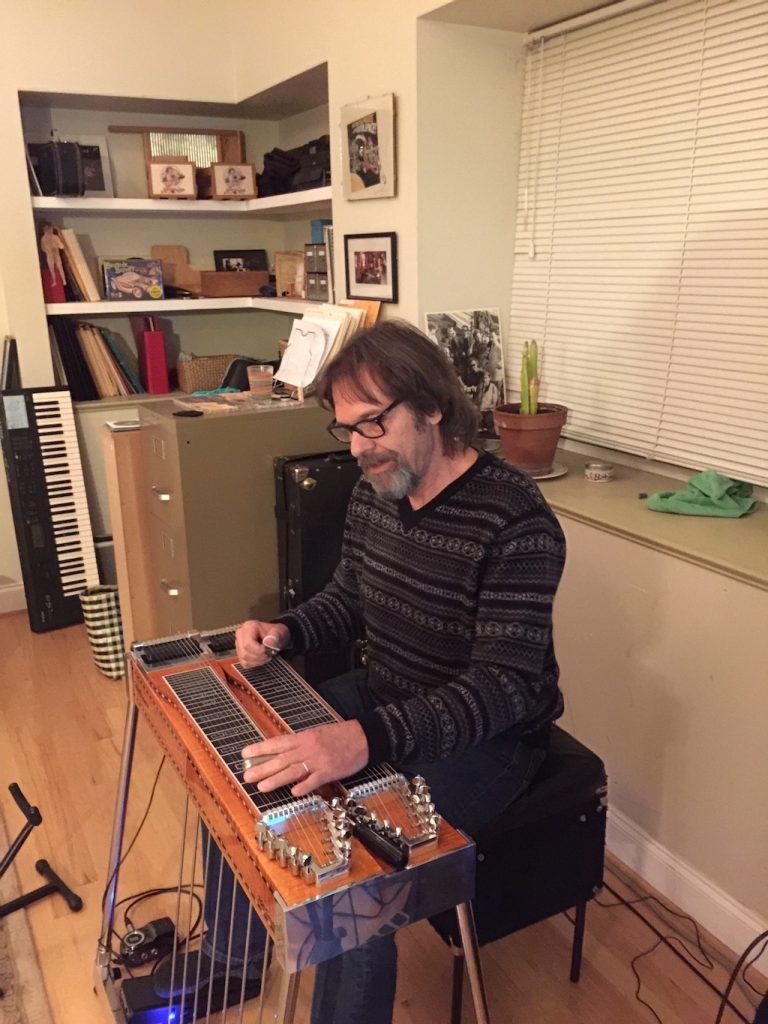 There’s a reason why pedal steel players are a rare breed—it isn’t an easy instrument to tackle, and an even more difficult one to master. Jim figured it out himself, but has taken a few lessons from some of the legendary players around Nashville. 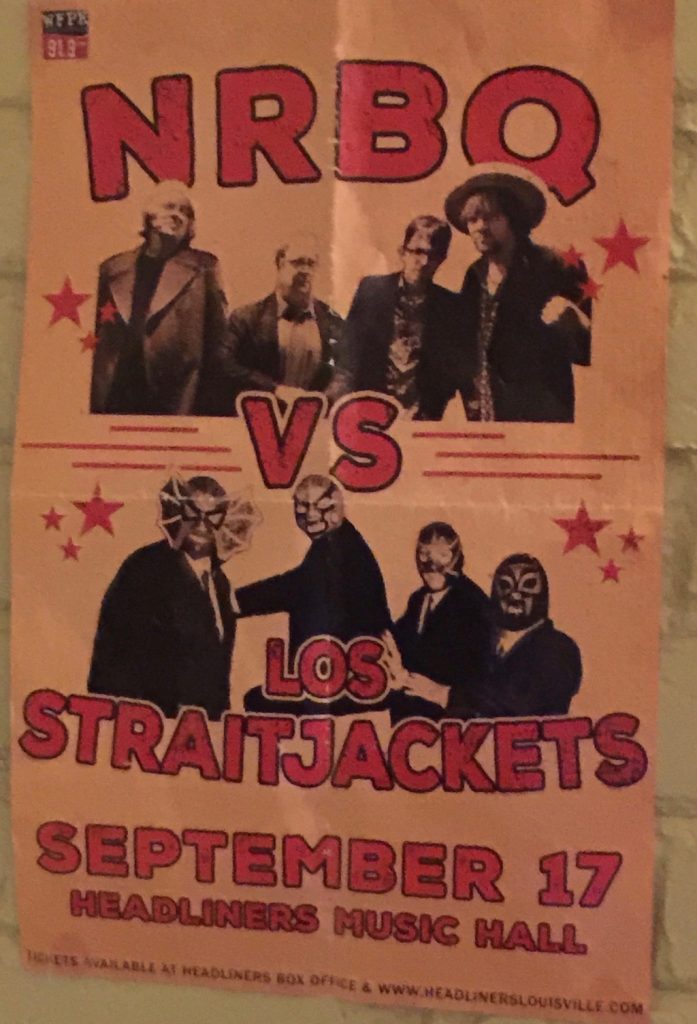 On the studio wall hung a poster of two of the many bands Jim has worked with over the years-NRBQ and Los Straightjackets. Although he started working the gospel scene while still in college, and worked with artists as diverse as Townes Van Zandt, Big Joe Williams and Emmy Lou Harris, Jim is a restless creative force. He brings out the best in others, and it shows in the music and good humor that seems to flow whenever he is in the room. More on Jim Hoke in a later piece.

After a few days in Nashville, we head south, into the famed Delta. 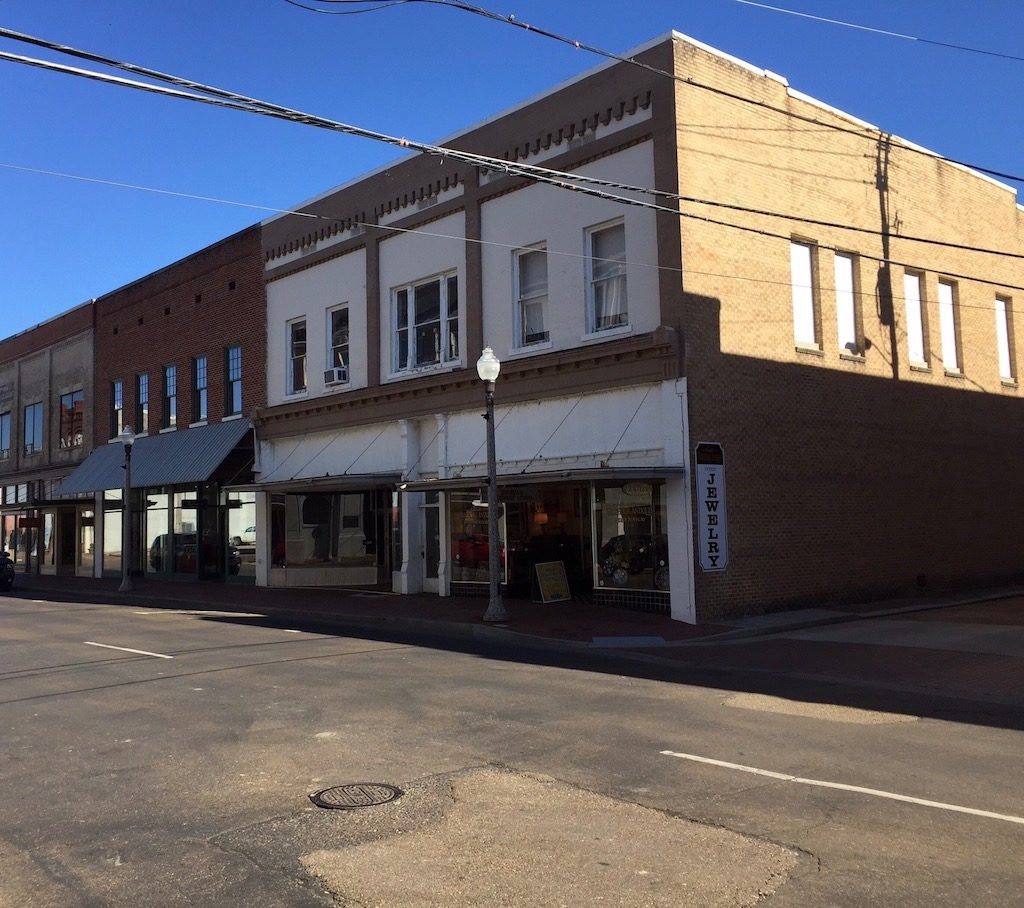 We lay up for the night at an elegant small inn and restaurant in Greenwood, Mississippi called The Alluvian. The restaurant consists of a series of private curtained booths reminiscent of the Prohibition era. We ate well, mostly local seafood delicacies and retired to a large opulent hotel room above for the night. 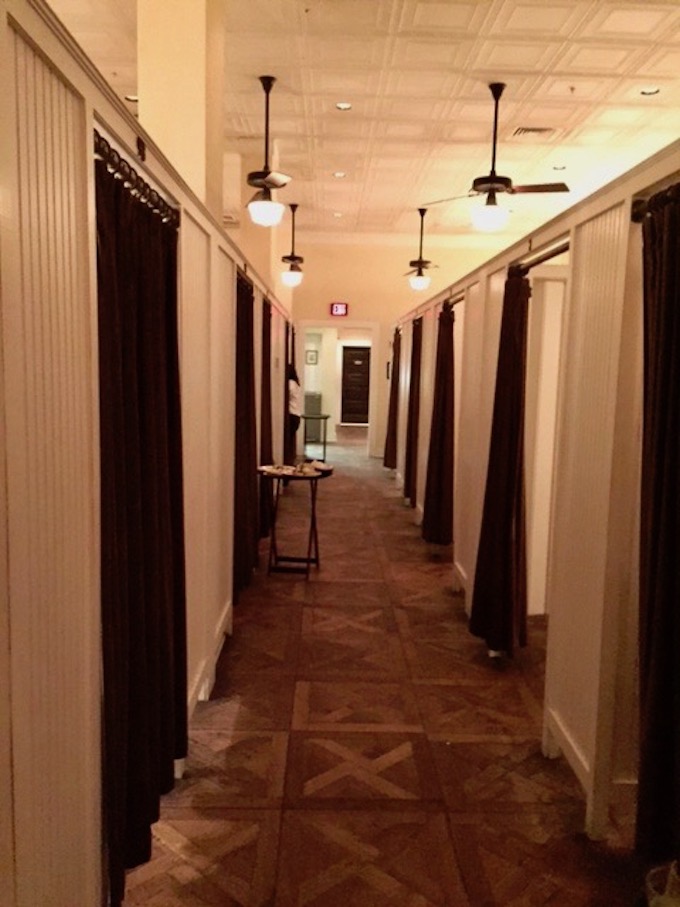 Private Dining Booths at the Alluvian

I thought about the drive that brought us here: past endless miles of flat open fields in all directions, some time on Highway 61 and a turn toward Clarksdale, on Route 49. 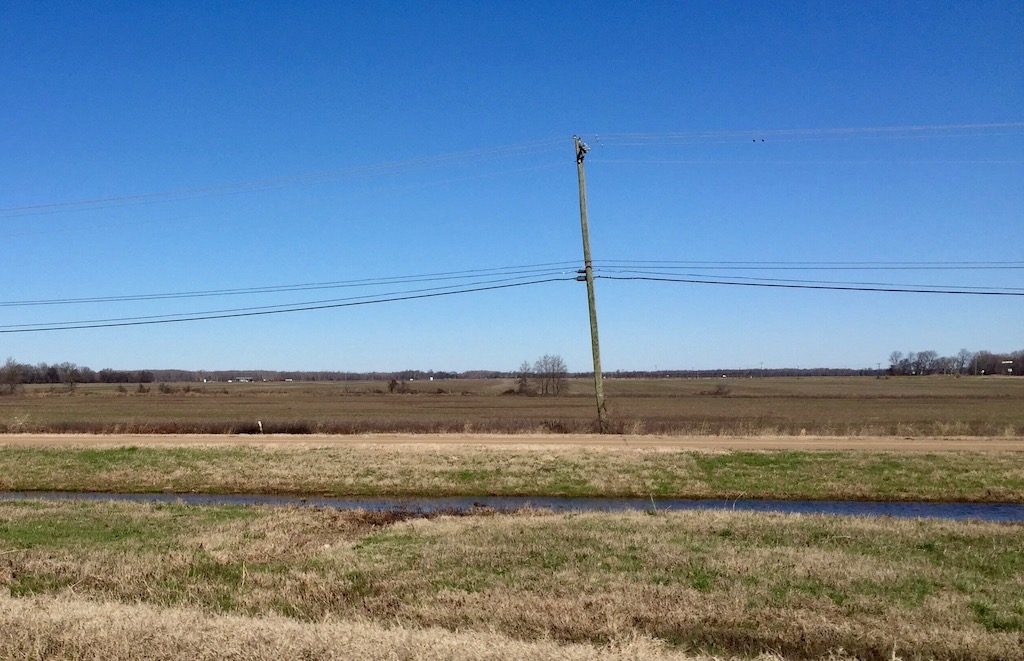 The “crossroads,” at least the one memorialized by a sign on the road, is better served by imagination than reality. The road leading to Parchman was clearly marked on Route 49 but one could see virtually nothing from the highway. Perhaps it is better than way; the place still operates as a prison, as far as I know, and is remembered as a kingdom of misery. It is part of the sad, dark history of the Delta blues but travelling in the Delta today, you’ll see little evidence of that history. Yes, there are some museums and markers along the road, conjuring up famous waypoints along the Blues Highway. Yet what captured my fancy weren’t sepia toned images of the old blues players but the vitality of the place today. There’s life here—food, people, music, shops, endless unspoiled vistas, architecture, old towns, thriving businesses and a gentle country charm, as deeply and as heartfelt, as any in the South. By all means go for the history and the legends of the blues, but stay for the people—there’s magic here, and it isn’t just what’s lost to the past.

There Is No “Magic Bullet” in Hi-Fi No Magic Solutions I’ve spent some time on the audio chat fora over the years. Many popular threads these days are devoted to cheap improvements that can be made using audiophile “tweaks” or repurposed non-audiophile products. These can be applied to isolate gear, enhance the signals or connections or otherwise address some perceived problem that, once solved, offers to raise the level of music reproduction. It’s like a cheap solution to upgrade your system: from audiophile fuses, special wires (beyond simply having a high-quality interconnect, speaker wire or power cable) and other tweaks, to contact fluids and other things that you can attach to power sources, equipment, or place in the room (bowls, various harmonizers or active resonators, noise harvesters, etc.) This is apart from room treatment, which is sui generis; that is, every situation is … END_OF_DOCUMENT_TOKEN_TO_BE_REPLACED

Milt Ward Reissue-release date May 6, 2022  Andreas Vingaard, of Frederiksberg Records, dropped me a note that the Milt Ward & Virgo Spectrum record about which much has been written here will be available on vinyl beginning on May 9, 2022. However, several promo emails today, Friday, May 6, 2022 say the record is available NOW via Bandcamp (see link below). The reissue was done with the participation of Milt Ward’s family and includes comprehensive notes in a booklet. Given the price of original pressings, this should be worthwhile even if not taken from the master tape. I plan to get a copy and we’ll do a shoot-out with my “OG” pressing. I’m sure some of you are willing to brook a little sonic compromise to get access to an otherwise very hard to find, expensive spiritual jazz rarity. At the time of this writing there is one copy on Discogs in NM condition for media for over … END_OF_DOCUMENT_TOKEN_TO_BE_REPLACED

Although I don't have all the details yet, I have learned that Frederiksberg Records, a small, eclectic label from New York, is in the process of reissuing the hard to find (and even harder to pay for) jazz obscurity, Milt Ward and Virgo Spectrum. You can find out more by keeping tabs on Frederiksberg's Bandcamp page, https://frederiksbergrecords.bandcamp.com   I'm told there is a bootleg out there so be careful. Frederiksberg is doing this project with the participation of the family of Milt Ward, which is to be applauded. Hopefully, this will give more access to a great jazz record at a reasonable price. The Roots album reissue from Frederiksberg (which is sold out on vinyl on the Frederiksberg Records bandcamp site) still appears to be available through some online retailers as a pre-order, so that's another one to jump on now if you can find it-- the original is extremely pricey and … END_OF_DOCUMENT_TOKEN_TO_BE_REPLACED

Clem Snide- Forever Just Beyond With a name derived from a character in the same literary work as the band name so famously identified with the Walter Becker-Donald Fagen duo, Clem Snide has an extensive discography, typically cataloged as “alt country.” This latest release is the work of one of its founding members, Eef Barzelay, who was responsible for much of the songwriting and singing. According to his bio, Barzelay suffered some serious bumps in the road during the last decade, including a failing marriage and financial ruin. At the same time, he learned that Scott Avett was a fan and they found inspiration in each other, leading to this album- a collaboration of artistry where Avett and Barzelay share some writing credits and Avett produces. The result is a fresh, upbeat set of tunes that are appealing in their simplicity and refreshing in their sincerity. The band is first tier … END_OF_DOCUMENT_TOKEN_TO_BE_REPLACED

Muriel Grossmann- Reverence Muriel Grossmann continues her quest for musical ascension on Reverence, which was released on vinyl in early December, 2019 on the RR Gems label as a 2 LP set. The compositions are Grossmann’s, and the band is much the same as the group of seasoned musicians with whom she has worked for some time (and detailed in the review of her Golden Rule), but for one notable exception: the addition of a keyboard player who brings that rich, woody Hammond B-3 sound to a series of compositions devoted to Africa. In some ways, Ms. Grossmann’s exploration of the roots of jazz deliberately eschews any superficial attempt to make African music. Instead, she draws inspiration from its influences, which are wide ranging and deep—you can hear rhythm and blues sounds mixed with more traditional African instrumentation and polyrhythms and come away with something that is both … END_OF_DOCUMENT_TOKEN_TO_BE_REPLACED