home
You are here: Home / Features / Gone to Texas

I’m long overdue in publishing new material at The Vinyl Press. My mini-travelogue of our journey from New York through the Deep South was part of our transit, a road trip of relocation to Austin, Texas. We landed in Austin on February 1, and with a pretty good sense of the real estate market here (great for sellers, ugly for buyers), we set out with our broker to find a place that appealed. My original intention was to buy something in an international modern vein, but that didn’t happen for a number of reasons.

Our “new” house in Austin is circa the 1880’s and restored to preservationist standards, retaining all the original fittings, wood, transoms, hardware and embellished with period recreations of wallpaper and a modern “period” style kitchen. The house is constructed in the main of wood- including the interior walls, which are made of shiplap, planks of wood that have been petrified by age and heat. The house was reconstructed over a couple of decades by a well-known local preservationist and artist (who happens to be our next door neighbor). 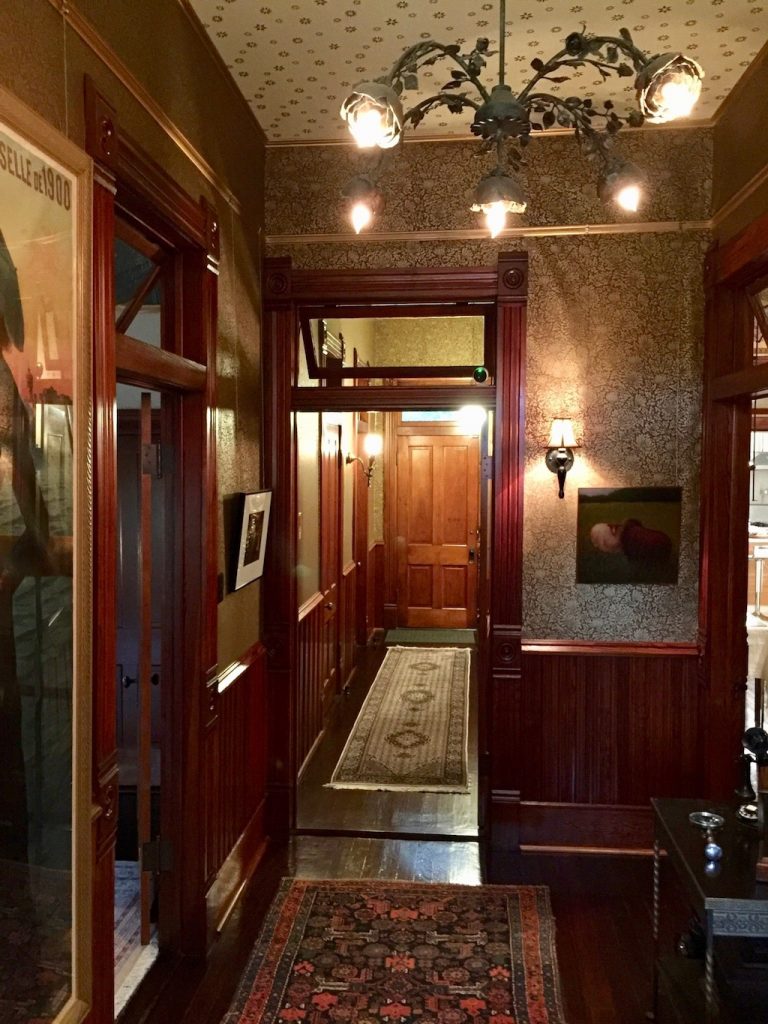 Hallway; chandelier was a gift to the house while under previous ownership from Mark Andes, the bassist for Spirit

We are just south of the river, with a view of downtown, in the South Congress area. The neighborhood is a mishmash of 19th century, early 20th century, and some modern, along with some vestiges of the “hippie” Austin from the ‘70s (which in actuality, dates back earlier—these are often little more than tiny old cottages with multiple outbuildings, home made fencing, and lot’s of stuff in the yard).

Although my initial plan was to buy a property with enough land to eventually build a separate building for the hi-fi and record collection, I set up the main hi-fi system in an open loft space at the top of the house. 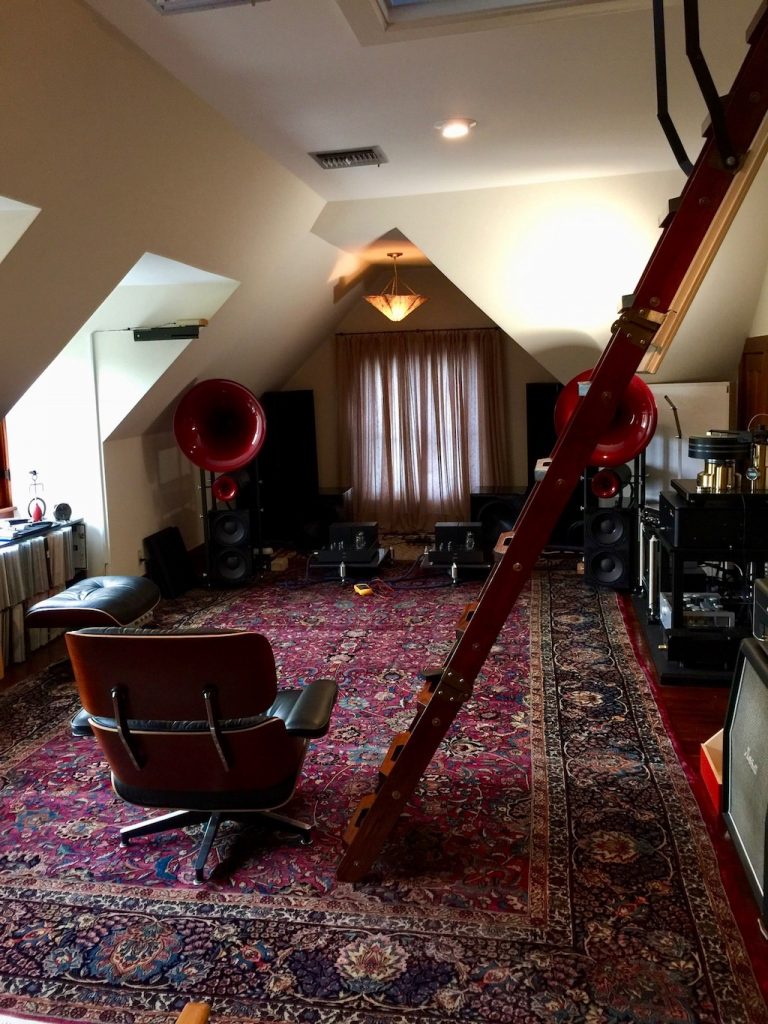 It is a cool room, with views of the city, a ladder leading to a widow’s peak at the top of the house with even more sweeping views, and a few acoustic challenges that I’ve been addressing.

I decided to go the full Monty on power, and had a large electrical contractor here pull dedicated lines and install a robust 10kVa isolation transformer system outside. 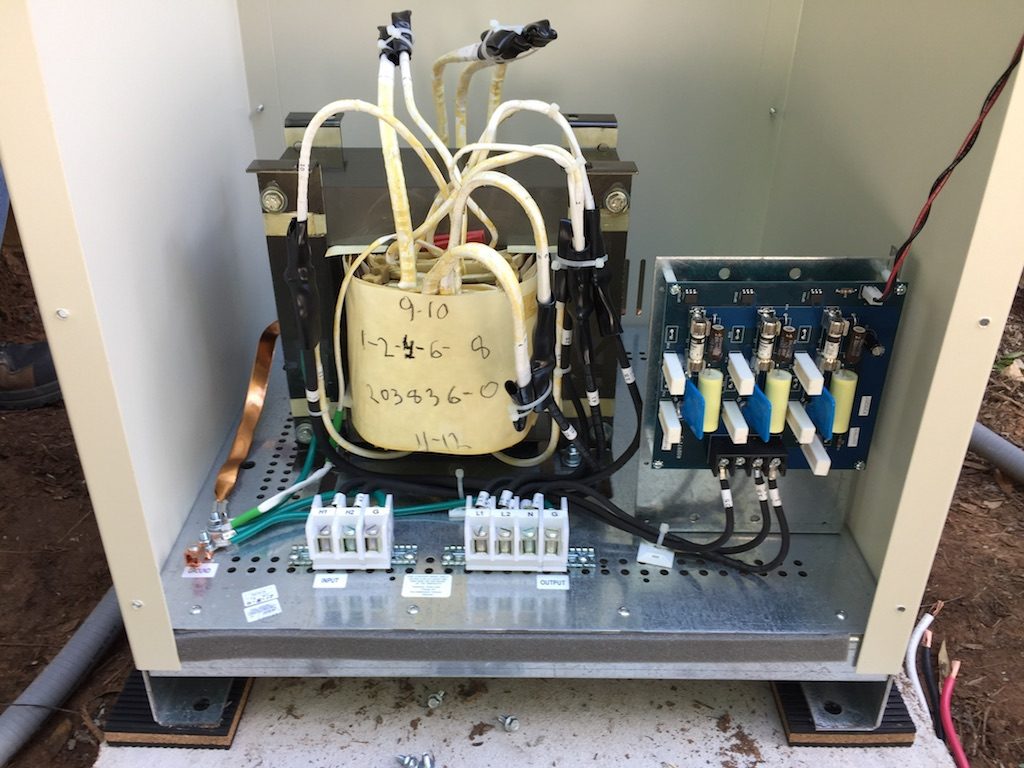 We upgraded the air conditioning systems, and I set about making a silencer box for the ½ HP tone arm air compressor; what I wound up with looks like Darth Vader’s bar fridge but it works extremely well. 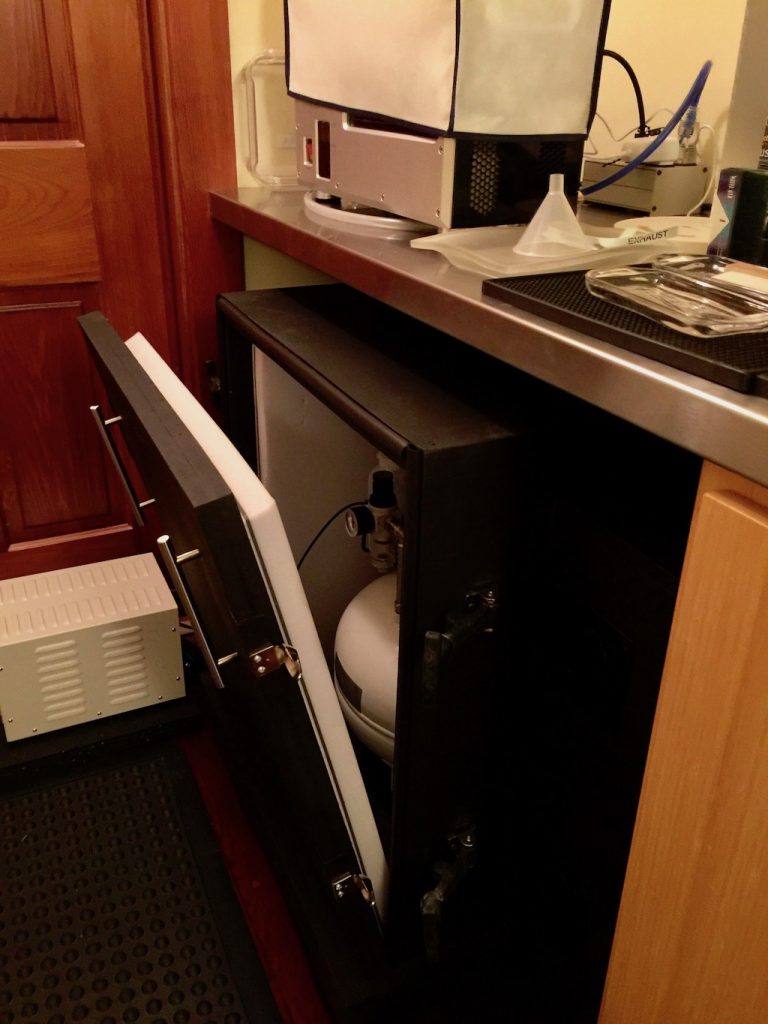 I also had to face footfall issues with a 120-year-old wooden house. I had a structural engineer here for other purposes, and had him evaluate some sort of wall mount for my 170 lb. turntable and 58 lb. plinth. The engineer just shook his head. That led to the purchase of a large Minus K anti-vibration platform and the reinforcement of the floor beneath the front-end equipment. With fairly minimal room treatment (mainly bass traps) the system is running fine, and sounds better than it did in New York. 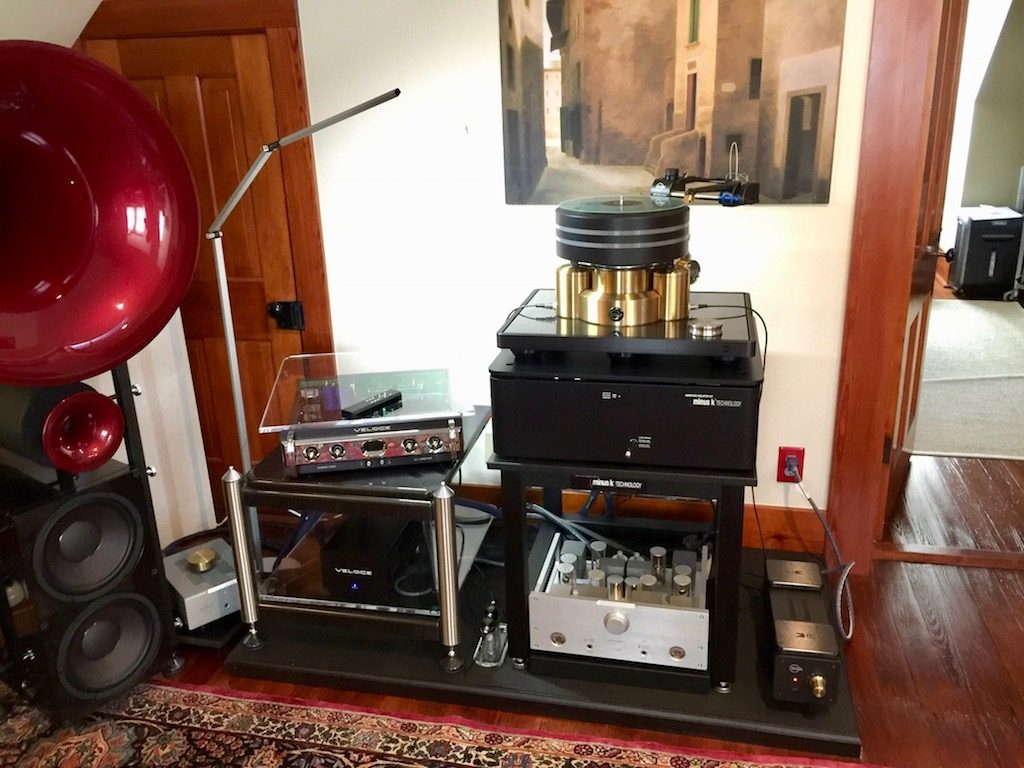 I also set up a vintage system comprised of some equipment that I have owned for decades and promised myself I would have restored someday. See the accompanying piece, A Tribute to Quad, which describes that system in more detail.

All of this is a long-winded way of saying I’m back. I’ll be writing up some records and covering a few live shows. Since Austin is the “live music capital of the world,” how could I resist? Jimmy Vaughan plays in a trio with a Hammond B-3 at a couple of clubs on South Congress, just a few minutes walk from our house, Redd Volkaert        and Bill Kirchen, two monster Tele players are regulars at the local clubs and there is no shortage of talent, from psych, metal and hard rock to old school western. Some of the venues are classic, like the Continental Club on South Congress; others, like the Hotel Vegas in East Austin, are a little more edgy, in “emerging” neighborhoods; yet others, like the ACL and Bass Hall are serious concert halls.

Some interesting album coverage accompanies this piece. I’ll also be updating my system profile(s) on the “About” page. I look forward to sharing some new and old discoveries along the way now that we’ve started to settle in.

Back in the outlaw days, “gone to Texas” was a shorthand for “getting out of Dodge” to avoid the law. That wasn’t our motivation for moving here, but I feel a certain sense of freedom now that I have fully retired from the practice of law as well as a great sense of adventure in exploring the way stations of Texas history. 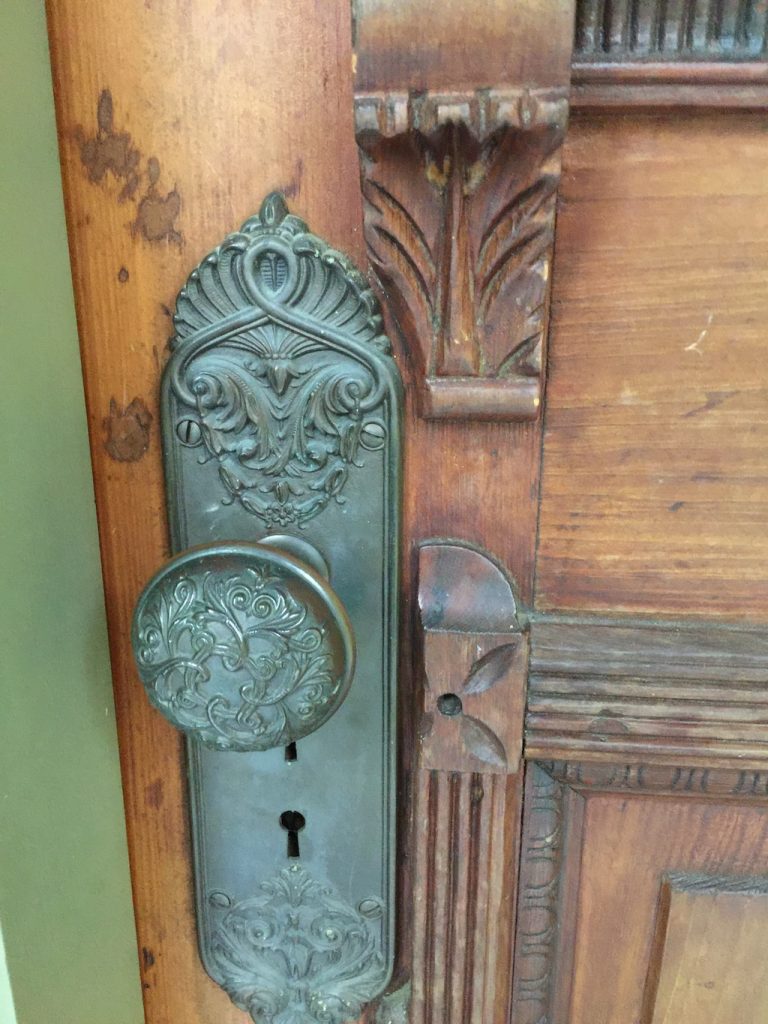 Although I don't have all the details yet, I have learned that Frederiksberg Records, a small, eclectic label from New York, is in the process of reissuing the hard to find (and even harder to pay for) jazz obscurity, Milt Ward and Virgo Spectrum. You can find out more by keeping tabs on Frederiksberg's Bandcamp page, https://frederiksbergrecords.bandcamp.com   I'm told there is a bootleg out there so be careful. Frederiksberg is doing this project with the participation of the family of Milt Ward, which is to be applauded. Hopefully, this will give more access to a great jazz record at a reasonable price. The Roots album reissue from Frederiksberg (which is sold out on vinyl on the Frederiksberg Records bandcamp site) still appears to be available through some online retailers as a pre-order, so that's another one to jump on now if you can find it-- the original is extremely pricey and … END_OF_DOCUMENT_TOKEN_TO_BE_REPLACED

Clem Snide- Forever Just Beyond With a name derived from a character in the same literary work as the band name so famously identified with the Walter Becker-Donald Fagen duo, Clem Snide has an extensive discography, typically cataloged as “alt country.” This latest release is the work of one of its founding members, Eef Barzelay, who was responsible for much of the songwriting and singing. According to his bio, Barzelay suffered some serious bumps in the road during the last decade, including a failing marriage and financial ruin. At the same time, he learned that Scott Avett was a fan and they found inspiration in each other, leading to this album- a collaboration of artistry where Avett and Barzelay share some writing credits and Avett produces. The result is a fresh, upbeat set of tunes that are appealing in their simplicity and refreshing in their sincerity. The band is first tier … END_OF_DOCUMENT_TOKEN_TO_BE_REPLACED

Muriel Grossmann- Reverence Muriel Grossmann continues her quest for musical ascension on Reverence, which was released on vinyl in early December, 2019 on the RR Gems label as a 2 LP set. The compositions are Grossmann’s, and the band is much the same as the group of seasoned musicians with whom she has worked for some time (and detailed in the review of her Golden Rule), but for one notable exception: the addition of a keyboard player who brings that rich, woody Hammond B-3 sound to a series of compositions devoted to Africa. In some ways, Ms. Grossmann’s exploration of the roots of jazz deliberately eschews any superficial attempt to make African music. Instead, she draws inspiration from its influences, which are wide ranging and deep—you can hear rhythm and blues sounds mixed with more traditional African instrumentation and polyrhythms and come away with something that is both … END_OF_DOCUMENT_TOKEN_TO_BE_REPLACED

Stylus Life- StylusTimer Stylus life is a recurring question in audio discussions. Some serious attention was devoted to the subject here, in Mike Bodell’s “The Finish Line for Your Phono Stylus.” That article examined the issue from a number of perspectives, including early studies, claims by cartridge manufacturers and real-life experiences by users. It also generated a long, interesting thread on the Steve Hoffman forum that is worthwhile to read. The Hoffman thread also generated an experiment by Ray Parkhurst who documented the wear of a new stylus under certain controlled conditions, which included a microscopic examination of the stylus at various time intervals over long hours of repeated play. See https://forums.stevehoffman.tv/threads/the-finish-line-for-your-phono-cartridge-stylus-wear-by-mike-bodell.842572/#post-21292730.   Whether you lean toward more optimistic … END_OF_DOCUMENT_TOKEN_TO_BE_REPLACED

Incoming! (More Interesting Records)  An "interesting record" to me offers something unexpected, whether it is a fresh take on a recognized genre, or something that opens a new way of experiencing instruments in combination. It does not have to be "strange" or challenging to listen to; in fact, I'm a sucker for a good melodic hook and enjoy technical prowess as much as anybody, but there has got to be something "more"-- an intangible that differentiates the record from the millions of others to which we all have access.   As mentioned in a recent editorial, a lot of records come in and not all get written up. It’s not an editorial decision or any reflection of the music or sonics; I only have so much time, and I tend not to write short blurbs, but longer (some may say ‘too long’) reviews. My “incoming” piles continue to grow as I publish. This series of short capsules is meant to … END_OF_DOCUMENT_TOKEN_TO_BE_REPLACED