home
You are here: Home / In Brief / Good Things Come in Big Packages- Sammy Miller and the Congregation 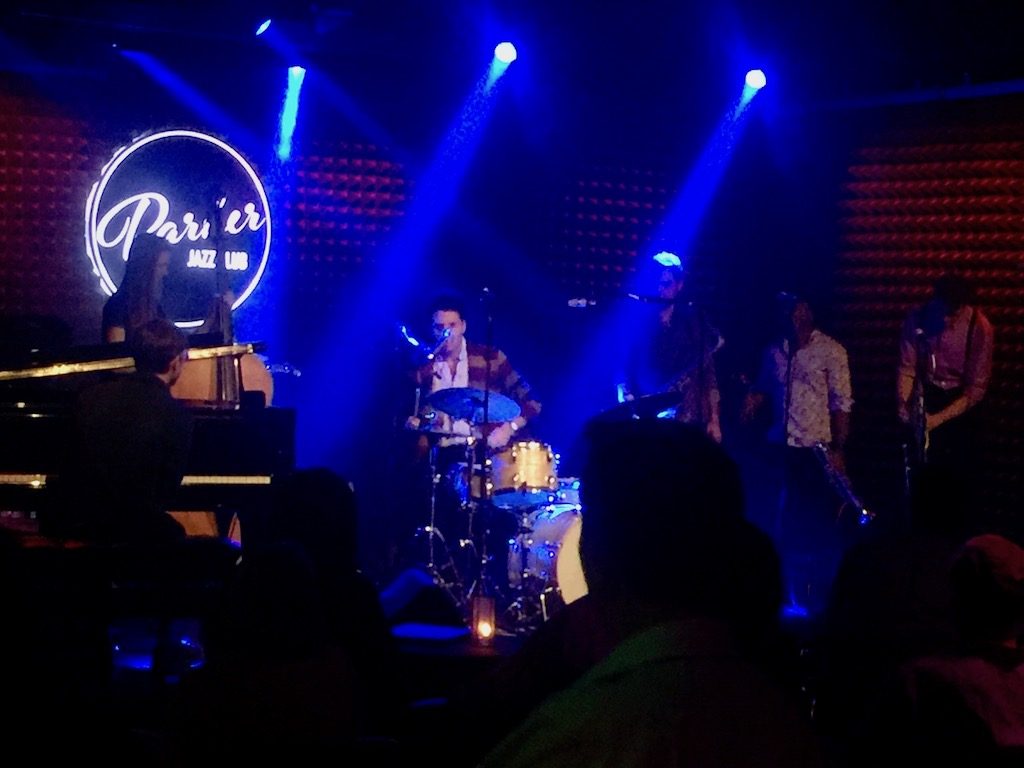 Big band style jazz probably reached its peak in popularity before WWII.[1]Sammy Miller and the Congregation aim to bring it back, with a few surprises, a laugh and an impressive, tuneful display of musicianship. If Sammy & Company prove anything, it’s that what we think of as “big band” music is an archetype and does not represent the music itself: vibrant, full of soul, life, blues and joy, with lots of space between the different instruments, offering an interplay of sounds that are immensely satisfying.

I used to catch myself sitting in Broadway shows in New York back in the day (my wife worked for a number of noted producers on Broadway), hearing all those seasoned players in the pit, just wishing they could let go and rock, rather than stick to the often schmaltzy “show tune” music to which they were committed—it all seemed too predictable, no matter how well it was played. Sammy Miller and the Congregation is what happens when seasoned musicians, on horns, bass, piano and drums really let go. 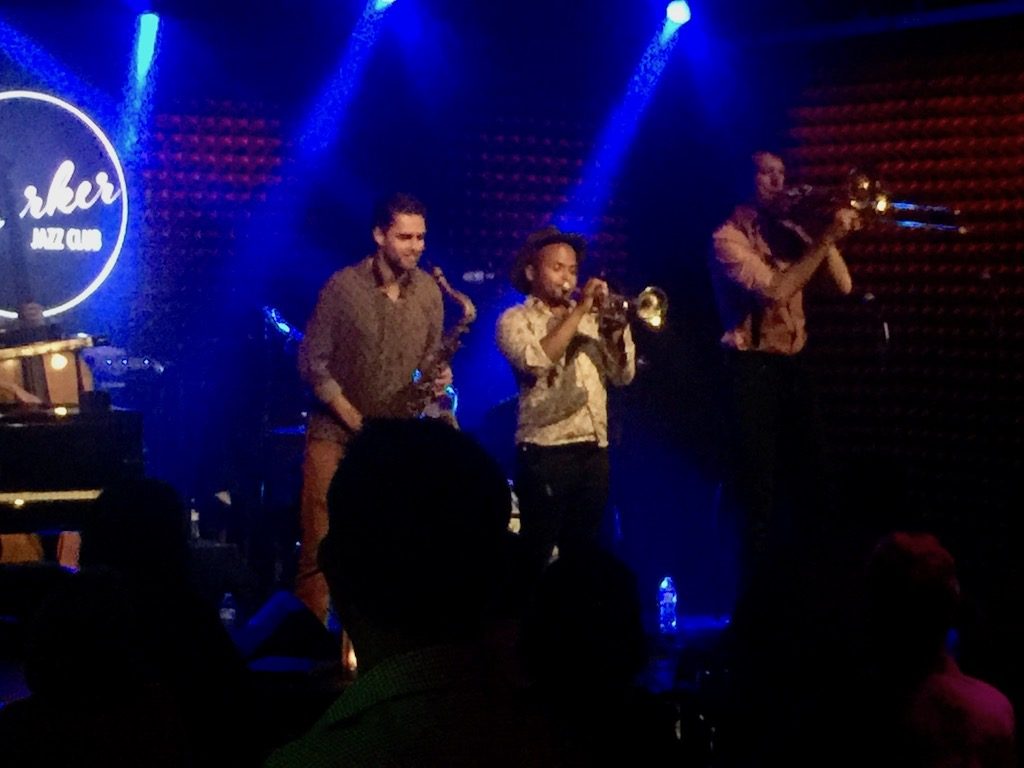 When was the last time you heard a blues solo on a trombone? Or a trumpet player who could swing from melodious to avant-garde and back in a few bars, with a tenor sax that just tears your heart out? The horn section of Sammy’s band just kills, individually and collectively. Each of these horn players is so damn good, they could be a featured artist fronting their own band(s). Together, and as soloists, they make this band shine. Sammy is front and center on the drums and doubles as MC; he has pyrotechnic skills, but doesn’t overwhelm, opting to act as bandleader rather than the main attraction. The grand piano work is absolutely elegant, played with classical flair rather than honky-tonk chops and Aussie Anna Butterss, in her second performance with the band, delivered on double bass to the rousing approval of the audience.

This is a band that can not only play their asses off, but makes you smile, dance and unconsciously nod to the rhythms at the same time your brain is saying “Wow- that’s what I really wanted to hear all these years!” No wandering solos, boring horn sections playing in unison by rote or obligatory drum and bass parts. What makes this band cook is rare: playing the unexpected in a way that takes you back to what the original sound and shape of the instruments can be—deep, full of soul and warmth and no small amount of humor. Sammy shared his thoughts on this:

There’s something strange about the jazz scene; on the one hand, it’s very “serious” but I was struck by how casually the arrangements were put together.  There also doesn’t seem to be much regard for entertaining people—that’s what we do. When you think about it, that’s what we are supposed to do.  In this band, we do take what we do seriously, but want to communicate the joy of the music.

Despite their youth, Sammy and his band are veterans; they’ve played, individually, with such big names as Wynton Marsalis, Lady Gaga and Queen Latifah, at venues like The White House, Lincoln Center and the Hollywood Bowl. Those are serious credentials in anyone’s book.

But hearing them together in this band is a revelation.  There’s a lot of stage business this band pulls off that adds to the drama of the music, well-conceived and executed; the pianist, David Linard, taking a break to shake hands with the audience during the first number only to be summoned back to the stage to jump back in with no time to spare. The band even does opera! (If you could imagine a combination of Duke Ellington and Monty Python).

We caught Sammy Miller and the Congregation at a relatively new jazz club in the warehouse district of downtown Austin: the Parker Jazz Club, which opened earlier this year, and is fronted by Grammy winner Kris Kimura, a fixture of the Austin jazz scene. (Nice club, we’ll be going back there too—clean, modern physical plant and kind, warm staff).

Sammy has been signed by my friends at Ramseur; expect something on record in 2019. In the meantime, go out of your way to find this band at a club near you. Your soul will thank you.

Sammy Miller and the Congregation: http://www.sammymillercongregation.com

[1]The reasons are various: a shift in taste, including to vocalists; the AF of M strike which put union instrumentalists out of work; changes in the style of jazz that made it less danceable, along with a shift toward rock and roll in the early to mid ‘50s. Jazz became more cerebral and less mainstream.  Overhead and production costs were a constant factor in live performances and touring as well.

Although I don't have all the details yet, I have learned that Frederiksberg Records, a small, eclectic label from New York, is in the process of reissuing the hard to find (and even harder to pay for) jazz obscurity, Milt Ward and Virgo Spectrum. You can find out more by keeping tabs on Frederiksberg's Bandcamp page, https://frederiksbergrecords.bandcamp.com   I'm told there is a bootleg out there so be careful. Frederiksberg is doing this project with the participation of the family of Milt Ward, which is to be applauded. Hopefully, this will give more access to a great jazz record at a reasonable price. The Roots album reissue from Frederiksberg (which is sold out on vinyl on the Frederiksberg Records bandcamp site) still appears to be available through some online retailers as a pre-order, so that's another one to jump on now if you can find it-- the original is extremely pricey and … END_OF_DOCUMENT_TOKEN_TO_BE_REPLACED

Clem Snide- Forever Just Beyond With a name derived from a character in the same literary work as the band name so famously identified with the Walter Becker-Donald Fagen duo, Clem Snide has an extensive discography, typically cataloged as “alt country.” This latest release is the work of one of its founding members, Eef Barzelay, who was responsible for much of the songwriting and singing. According to his bio, Barzelay suffered some serious bumps in the road during the last decade, including a failing marriage and financial ruin. At the same time, he learned that Scott Avett was a fan and they found inspiration in each other, leading to this album- a collaboration of artistry where Avett and Barzelay share some writing credits and Avett produces. The result is a fresh, upbeat set of tunes that are appealing in their simplicity and refreshing in their sincerity. The band is first tier … END_OF_DOCUMENT_TOKEN_TO_BE_REPLACED

Muriel Grossmann- Reverence Muriel Grossmann continues her quest for musical ascension on Reverence, which was released on vinyl in early December, 2019 on the RR Gems label as a 2 LP set. The compositions are Grossmann’s, and the band is much the same as the group of seasoned musicians with whom she has worked for some time (and detailed in the review of her Golden Rule), but for one notable exception: the addition of a keyboard player who brings that rich, woody Hammond B-3 sound to a series of compositions devoted to Africa. In some ways, Ms. Grossmann’s exploration of the roots of jazz deliberately eschews any superficial attempt to make African music. Instead, she draws inspiration from its influences, which are wide ranging and deep—you can hear rhythm and blues sounds mixed with more traditional African instrumentation and polyrhythms and come away with something that is both … END_OF_DOCUMENT_TOKEN_TO_BE_REPLACED

Stylus Life- StylusTimer Stylus life is a recurring question in audio discussions. Some serious attention was devoted to the subject here, in Mike Bodell’s “The Finish Line for Your Phono Stylus.” That article examined the issue from a number of perspectives, including early studies, claims by cartridge manufacturers and real-life experiences by users. It also generated a long, interesting thread on the Steve Hoffman forum that is worthwhile to read. The Hoffman thread also generated an experiment by Ray Parkhurst who documented the wear of a new stylus under certain controlled conditions, which included a microscopic examination of the stylus at various time intervals over long hours of repeated play. See https://forums.stevehoffman.tv/threads/the-finish-line-for-your-phono-cartridge-stylus-wear-by-mike-bodell.842572/#post-21292730.   Whether you lean toward more optimistic … END_OF_DOCUMENT_TOKEN_TO_BE_REPLACED

Incoming! (More Interesting Records)  An "interesting record" to me offers something unexpected, whether it is a fresh take on a recognized genre, or something that opens a new way of experiencing instruments in combination. It does not have to be "strange" or challenging to listen to; in fact, I'm a sucker for a good melodic hook and enjoy technical prowess as much as anybody, but there has got to be something "more"-- an intangible that differentiates the record from the millions of others to which we all have access.   As mentioned in a recent editorial, a lot of records come in and not all get written up. It’s not an editorial decision or any reflection of the music or sonics; I only have so much time, and I tend not to write short blurbs, but longer (some may say ‘too long’) reviews. My “incoming” piles continue to grow as I publish. This series of short capsules is meant to … END_OF_DOCUMENT_TOKEN_TO_BE_REPLACED