home
You are here: Home / In Brief / Stylus Life- StylusTimer 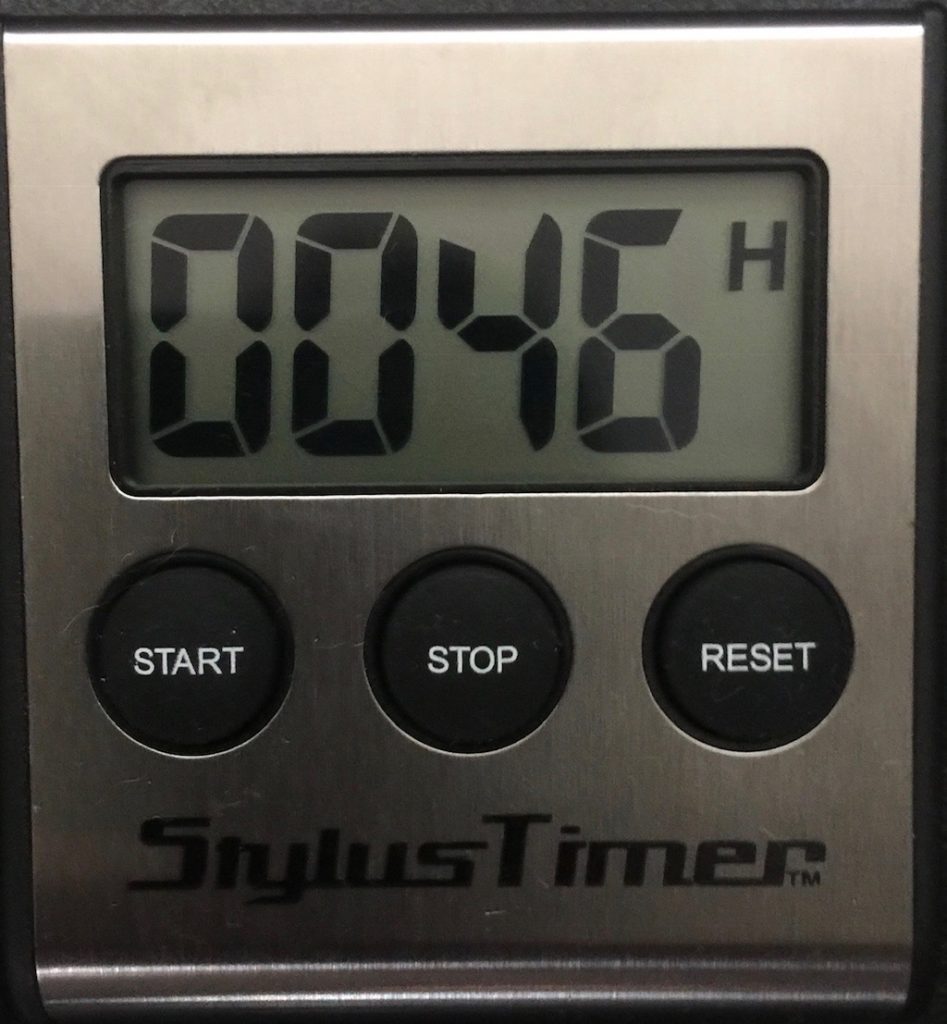 Stylus life is a recurring question in audio discussions. Some serious attention was devoted to the subject here, in Mike Bodell’s “The Finish Line for Your Phono Stylus.” That article examined the issue from a number of perspectives, including early studies, claims by cartridge manufacturers and real-life experiences by users. It also generated a long, interesting thread on the Steve Hoffman forum that is worthwhile to read. The Hoffman thread also generated an experiment by Ray Parkhurst who documented the wear of a new stylus under certain controlled conditions, which included a microscopic examination of the stylus at various time intervals over long hours of repeated play. See https://forums.stevehoffman.tv/threads/the-finish-line-for-your-phono-cartridge-stylus-wear-by-mike-bodell.842572/#post-21292730.

Whether you lean toward more optimistic assessments of stylus life, or take a more conservative view, knowing how many hours of play a given stylus has undergone is critical. It is a vital piece of data that many of us neglected to monitor. Mike’s article suggested using a tally counter, a way to approximate stylus hours by clicking each time an LP side was played and making an approximation based on the assumption that an LP side was roughly 20 minutes of playing time; that obviously varies by record- some classical records have longer playing times per side and some pop, rock and jazz sides have less than 20 minutes. Three clicks thus equals an “hour” using a tally counter in this manner and gives you a good if imperfect sense of how many hours the stylus has been put to task.  You just have to remember to click.

Most of the new mechanical tally counters I’ve had are cheap junk; I use them in various rooms in the house- how many cycles my ultrasonic cleaner has run before I change the bath, as well as clocking mileage on various cartridges. The best tally counter I have is a vintage Veeder-Root that was recommended by Mike; it is an antique and has a bank vault like quality, but it is old and finding a specimen that works and doesn’t look like munched may be a challenge. And, it’s still an estimating device rather than a measuring device.

Now there is a purpose-built device available to measure stylus time with somewhat more precision: The StylusTimer, conceived by Don Lindich, who describes his gadget as a unique chronograph specifically designed to track the number of hours on a stylus. It’s inexpensive and well made. According to Don, who applied for a patent for the device, he was able to keep the price low by using off the shelf external case work, but developed a proprietary display and internal circuitry to accomplish a very specific task- start and stop in hours, accompanied by a large display and an indicator that the device is running. In correspondence with Don, he emphasized that the value of his product was the combination of three features: measurement in hours, denoted by the flashing “H” on the display when the counter is active, the non-volatile memory that allows you to change the AAA battery without losing accumulated time and a deliberate step (holding down the reset button for 3 seconds) to prevent inadvertent resets..

Don recommends a two-hand technique, lowering the tonearm with one hand and activating (or deactivating) the clock with the other—the buttons are large and easy to manage with one hand and the display is big and readable even at a distance. The display does not dim after some period of inactivity but Don says the AAA battery is probably good for 2 years.

The unit has a “low battery” indicator and, as mentioned, a non-volatile memory to retain hours clocked during a battery change. 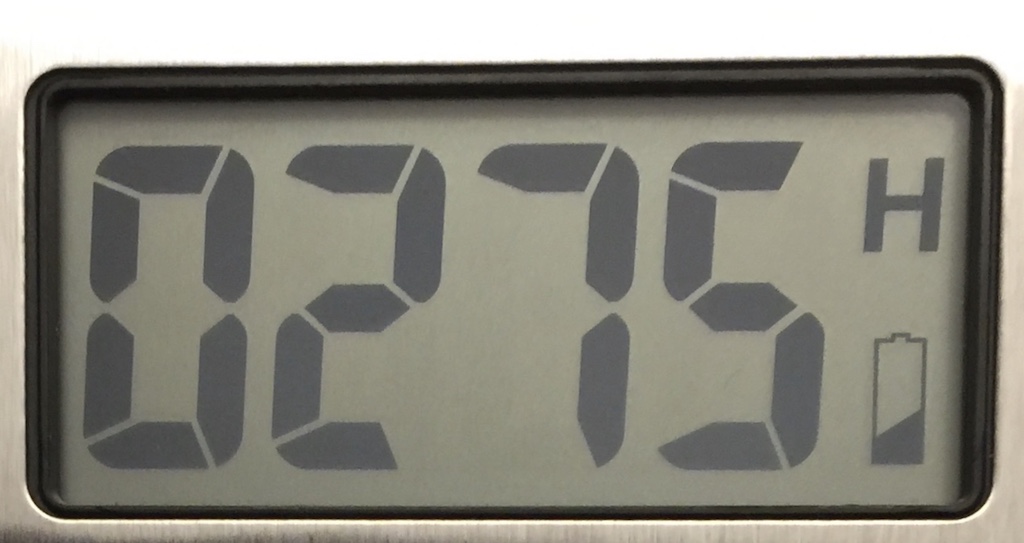 It’s easy to use and despite its low price ($19.95 including domestic shipping), it appears substantial. There’s also a swing out stand on the back for table top set up, as well as an integral magnet on the back if you wanted to attach it to your turntable stand when not in use (far enough away from the cartridge, of course, to avoid magnetic interference with the cartridge innards). In theory, this timer should be more accurate than the tally counter method, which is based on assumptions about side length. (The stylus timer is displaying actual playing hours and though it doesn’t display minutes, it does keep track of the increments of time leading to each hour of displayed clock time).

Knowing how many hours your stylus has run is not an absolute determinant of playing life, but it is an important data point. An examination of the stylus by the manufacturer or a reputable third party would then be mandated, unless you are using cartridges with user replaceable styli and are inclined to replace them as a matter of course.

You can find the StylusTimer at https://www.stylustimer.com along with instructions and ordering information (there are bulk discounts if you buy multiple units). It also appears that Don has distributors throughout the world, so you may be able to buy the device inexpensively in Europe and Aus/NZ as well. Don told me that some customers are buying them to keep track of tube life on amplifiers or hours of wear on tape heads. As mentioned, I use a timer to keep track of the number of records cleaned on my ultrasonic record cleaner, in addition to running multiple turntables. I think it was Henry Kloss who said inventiveness was recognizing a need and filling it. This appears to fulfill that need and does so at a reasonable price.

There Is No “Magic Bullet” in Hi-Fi No Magic Solutions I’ve spent some time on the audio chat fora over the years. Many popular threads these days are devoted to cheap improvements that can be made using audiophile “tweaks” or repurposed non-audiophile products. These can be applied to isolate gear, enhance the signals or connections or otherwise address some perceived problem that, once solved, offers to raise the level of music reproduction. It’s like a cheap solution to upgrade your system: from audiophile fuses, special wires (beyond simply having a high-quality interconnect, speaker wire or power cable) and other tweaks, to contact fluids and other things that you can attach to power sources, equipment, or place in the room (bowls, various harmonizers or active resonators, noise harvesters, etc.) This is apart from room treatment, which is sui generis; that is, every situation is … END_OF_DOCUMENT_TOKEN_TO_BE_REPLACED

Milt Ward Reissue-release date May 6, 2022  Andreas Vingaard, of Frederiksberg Records, dropped me a note that the Milt Ward & Virgo Spectrum record about which much has been written here will be available on vinyl beginning on May 9, 2022. However, several promo emails today, Friday, May 6, 2022 say the record is available NOW via Bandcamp (see link below). The reissue was done with the participation of Milt Ward’s family and includes comprehensive notes in a booklet. Given the price of original pressings, this should be worthwhile even if not taken from the master tape. I plan to get a copy and we’ll do a shoot-out with my “OG” pressing. I’m sure some of you are willing to brook a little sonic compromise to get access to an otherwise very hard to find, expensive spiritual jazz rarity. At the time of this writing there is one copy on Discogs in NM condition for media for over … END_OF_DOCUMENT_TOKEN_TO_BE_REPLACED

Although I don't have all the details yet, I have learned that Frederiksberg Records, a small, eclectic label from New York, is in the process of reissuing the hard to find (and even harder to pay for) jazz obscurity, Milt Ward and Virgo Spectrum. You can find out more by keeping tabs on Frederiksberg's Bandcamp page, https://frederiksbergrecords.bandcamp.com   I'm told there is a bootleg out there so be careful. Frederiksberg is doing this project with the participation of the family of Milt Ward, which is to be applauded. Hopefully, this will give more access to a great jazz record at a reasonable price. The Roots album reissue from Frederiksberg (which is sold out on vinyl on the Frederiksberg Records bandcamp site) still appears to be available through some online retailers as a pre-order, so that's another one to jump on now if you can find it-- the original is extremely pricey and … END_OF_DOCUMENT_TOKEN_TO_BE_REPLACED

Clem Snide- Forever Just Beyond With a name derived from a character in the same literary work as the band name so famously identified with the Walter Becker-Donald Fagen duo, Clem Snide has an extensive discography, typically cataloged as “alt country.” This latest release is the work of one of its founding members, Eef Barzelay, who was responsible for much of the songwriting and singing. According to his bio, Barzelay suffered some serious bumps in the road during the last decade, including a failing marriage and financial ruin. At the same time, he learned that Scott Avett was a fan and they found inspiration in each other, leading to this album- a collaboration of artistry where Avett and Barzelay share some writing credits and Avett produces. The result is a fresh, upbeat set of tunes that are appealing in their simplicity and refreshing in their sincerity. The band is first tier … END_OF_DOCUMENT_TOKEN_TO_BE_REPLACED

Muriel Grossmann- Reverence Muriel Grossmann continues her quest for musical ascension on Reverence, which was released on vinyl in early December, 2019 on the RR Gems label as a 2 LP set. The compositions are Grossmann’s, and the band is much the same as the group of seasoned musicians with whom she has worked for some time (and detailed in the review of her Golden Rule), but for one notable exception: the addition of a keyboard player who brings that rich, woody Hammond B-3 sound to a series of compositions devoted to Africa. In some ways, Ms. Grossmann’s exploration of the roots of jazz deliberately eschews any superficial attempt to make African music. Instead, she draws inspiration from its influences, which are wide ranging and deep—you can hear rhythm and blues sounds mixed with more traditional African instrumentation and polyrhythms and come away with something that is both … END_OF_DOCUMENT_TOKEN_TO_BE_REPLACED