home
You are here: Home / Ephemera / The War of Fog

The War of Fog 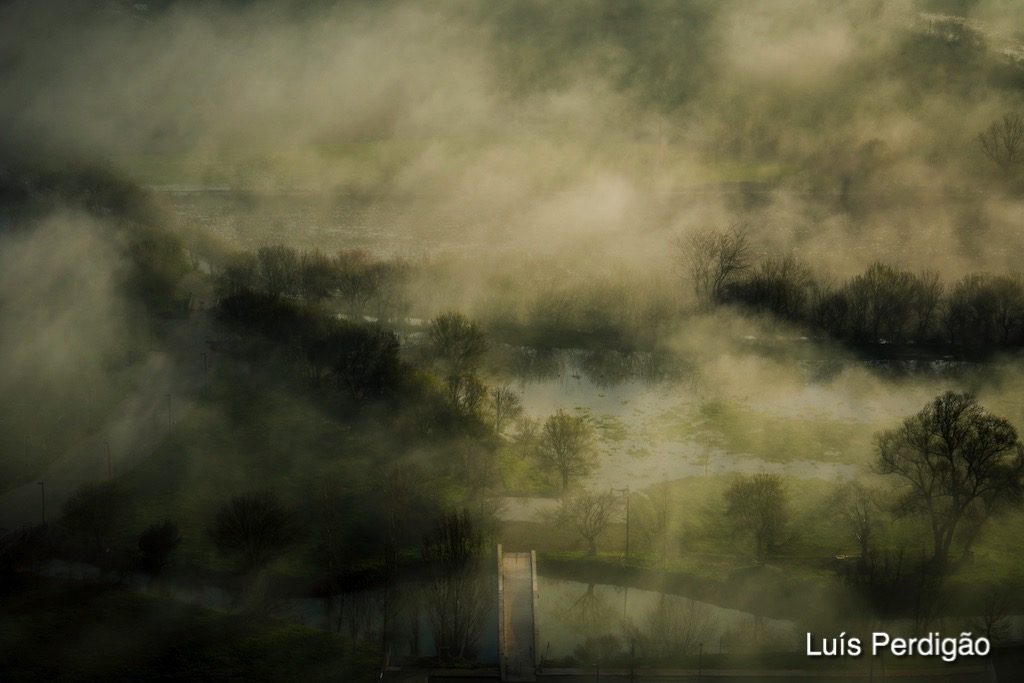 For forty days and nights, we’ve been packing boxes and squaring away our Hudson River home for sale to the new owners: roughly 12,000 records have gone through my hands recently; a few thousand left a while ago, and are now in the hands of a friend who returned to vinyl; as many were handed off to a wholesaler who dealt with the listings and shipping (none of the really rare stuff got sold, so you didn’t miss a thing). The wholesaler came back a couple weeks ago to take another 2,000 records out of here. That left me with about 6,000 records to pack. Once you are forced to consider the cost to value ratio of moving a large collection of records, you begin to get more selective about what you are willing to keep.

The gear was another matter. Like most “audiophiles,” I kept my original packing, even for gear I’ve owned since the early ‘70s. Some equipment was sent out for updates or just a factory “check-up.” Other stuff, like my old Quad ‘57s—sitting unused for years in packing– was shipped off for restoration. The Quads, which I have owned since 1973, were sent to Kent McCollum for a complete overhaul.    I plan to use them with a pair of old Quad II amps that had been languishing (and are also getting restored), along with some other period gear in a second, vintage system. My main system –consisting of horns and SET amps— will also be revisited once I’ve got a place to hang my hat.

I don’t ordinarily write about gear on The Vinyl Press, but I’m happy to keep readers updated on the progress of the vintage system as it gets assembled. However, I’m getting ahead of myself.

Although we had a full service mover, I packed all the records and gear; crates were made for my horns; large 19 inch floor to ceiling equipment racks, once used for a home theatre, were disassembled and hauled away; in wall wiring for the theatre system was tucked away behind professional looking wire panel covers. Carpeting was replaced where the video system equipment racks were bolted to the floor. My “compressor room,” which had been soundproofed, was spackled, painted and re-carpeted. A painting crew came through and touched up the walls, color matching their work throughout the house.

If war is hell and an army marches on its stomach, think of moving as a similar exercise in logistics. With all of that work finally done, I’m now in a sort of bleary, too many days at the front line without R&R feeling –where even the simplest tasks require thinking. And that’s when the fog crept in.

We haven’t bought a new place yet. All our stuff is in storage, the gear and records in temperature/humidity controlled vaults.

There is a certain freedom to this—homeless out of choice. Although New York remains our home for now, we planned a little road trip. I’ll be writing about that along the way. (Hint: much has to do with music and food).

In the meantime, a big shout out to all those who pitched in to help in large and small ways: the lovely ladies from the Piermont Rowing Club, Liz’s friends Elisabeth, Leslie and Desiree, as well as Deb, Jo, Jeff and Donna, Elsa, Dominic, Robert, Brian, James, Tim, Scott (of Piermont), Katie, Jennifer and Anne, Marjorie, Rob and Evan. Sometimes, people showed up all at once, like one of those French farces, where doors are opening and closing as people pass through, completely oblivious of each other. There were a few traffic jams in the driveway. Large Babylonian urns (replicas made out of Styrofoam once used as stage props) went out one door as crates for my horn speakers went through another. A mobile shredding truck reduced years of old, dated documents to confetti that got hauled away.

I learned a few lessons along the way. First: do not leave your toolbox in plain sight. If you do, the movers will pack it before you know it. Then you are well and truly ******. Once we get back our energy, we are going to hit the road. I’ll post some impressions, along with a few interviews along the way. 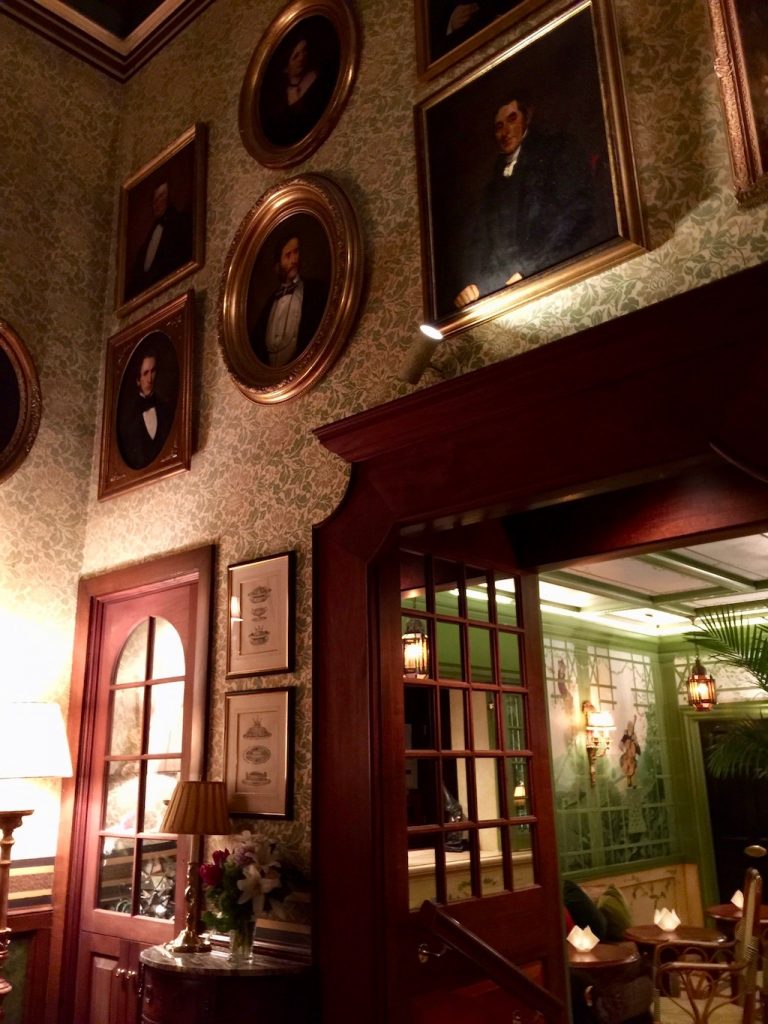 A long time respite for the Beltway crowd, far in spirit if not distance from the madness of our nation’s capitol, Patrick O’Connell has built a culinary shrine in the foothills of the Blue Ridge Mountains that has been thriving for almost 40 years. 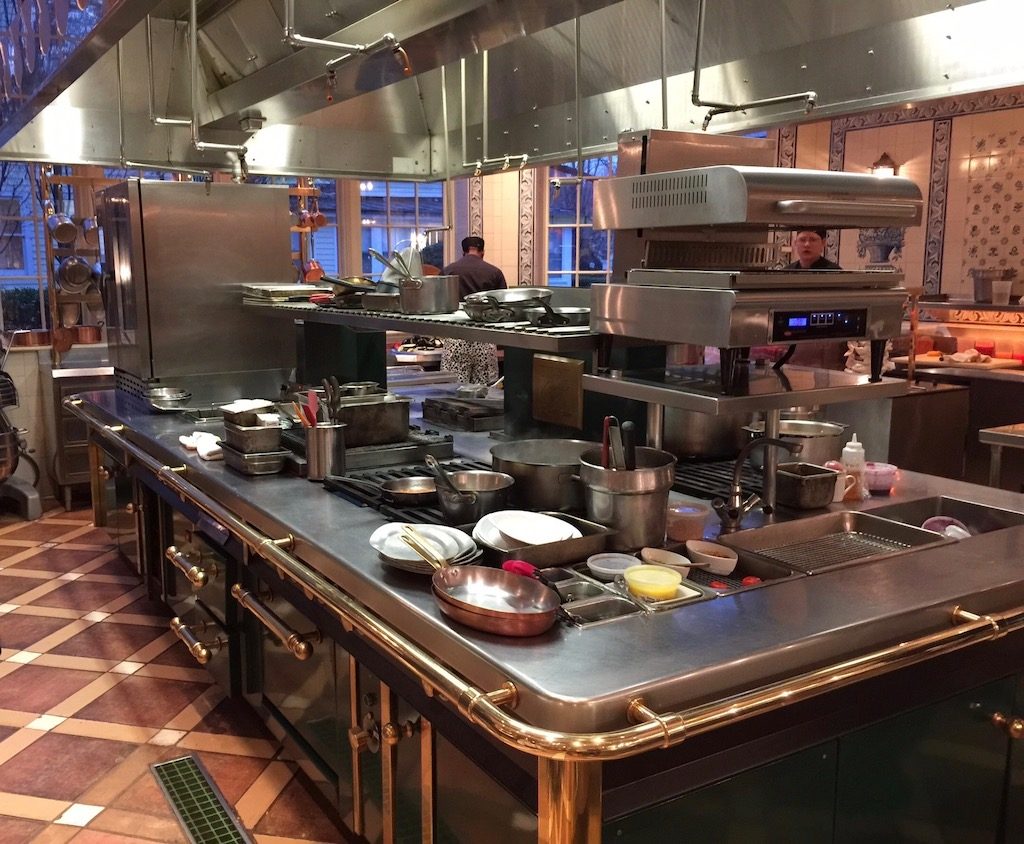 It is elegant in the way traditional 3 star country restaurants are in France. The closest model may be the great restaurant of Jacques Lameloise in Chagny, Burgundy, or Georges Blanc’s restaurant and hotel outside of Lyon. Like those noteworthy institutions, the Inn offers a handful of luxurious rooms for overnight guests and the surrounding village centers on this culinary “destination.” 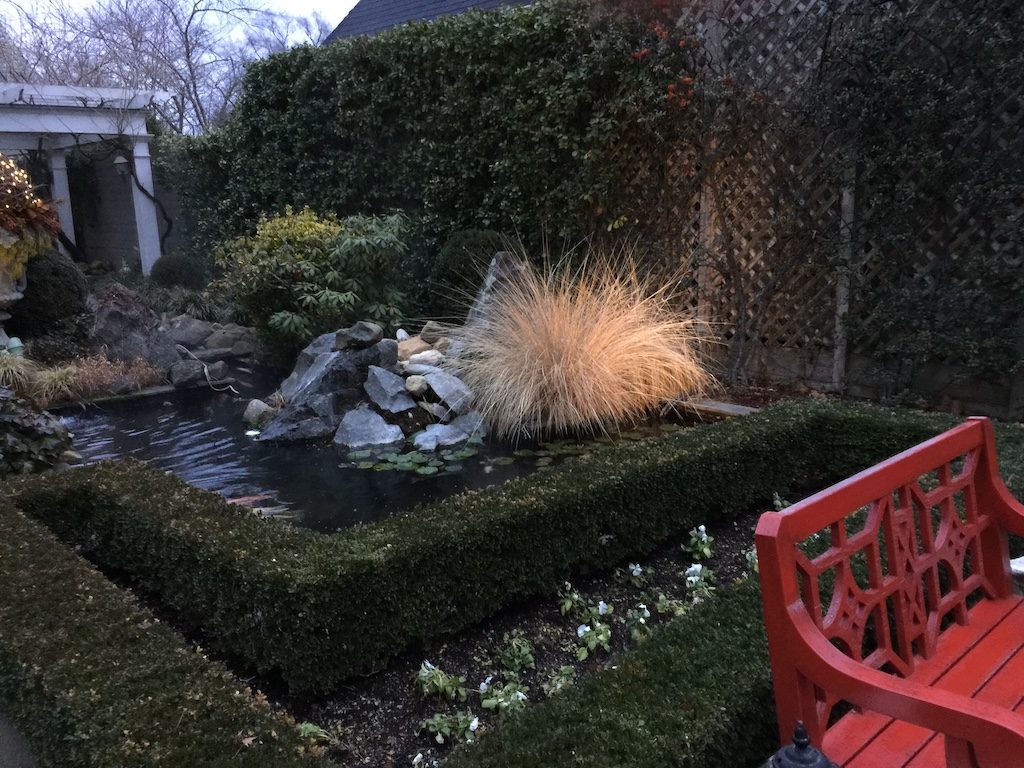 These are places for special occasions. Although we haven’t fully recharged, a serious meal and a good bed in such sybaritic surroundings goes a long way. 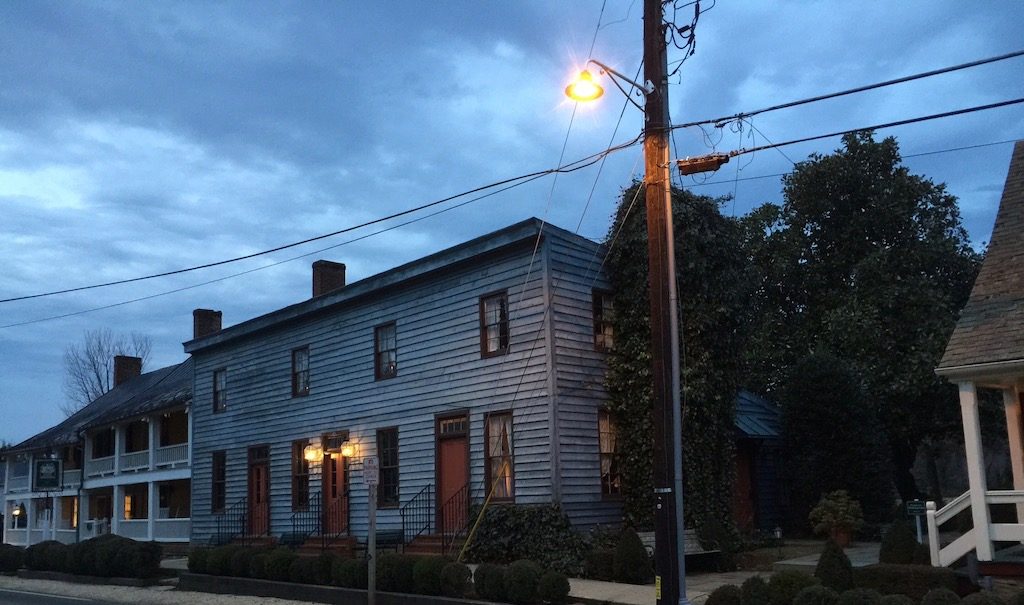 We now head to the Piedmont region via a leisurely jaunt along Skyline Drive.

There Is No “Magic Bullet” in Hi-Fi No Magic Solutions I’ve spent some time on the audio chat fora over the years. Many popular threads these days are devoted to cheap improvements that can be made using audiophile “tweaks” or repurposed non-audiophile products. These can be applied to isolate gear, enhance the signals or connections or otherwise address some perceived problem that, once solved, offers to raise the level of music reproduction. It’s like a cheap solution to upgrade your system: from audiophile fuses, special wires (beyond simply having a high-quality interconnect, speaker wire or power cable) and other tweaks, to contact fluids and other things that you can attach to power sources, equipment, or place in the room (bowls, various harmonizers or active resonators, noise harvesters, etc.) This is apart from room treatment, which is sui generis; that is, every situation is … END_OF_DOCUMENT_TOKEN_TO_BE_REPLACED

Milt Ward Reissue-release date May 6, 2022  Andreas Vingaard, of Frederiksberg Records, dropped me a note that the Milt Ward & Virgo Spectrum record about which much has been written here will be available on vinyl beginning on May 9, 2022. However, several promo emails today, Friday, May 6, 2022 say the record is available NOW via Bandcamp (see link below). The reissue was done with the participation of Milt Ward’s family and includes comprehensive notes in a booklet. Given the price of original pressings, this should be worthwhile even if not taken from the master tape. I plan to get a copy and we’ll do a shoot-out with my “OG” pressing. I’m sure some of you are willing to brook a little sonic compromise to get access to an otherwise very hard to find, expensive spiritual jazz rarity. At the time of this writing there is one copy on Discogs in NM condition for media for over … END_OF_DOCUMENT_TOKEN_TO_BE_REPLACED

Although I don't have all the details yet, I have learned that Frederiksberg Records, a small, eclectic label from New York, is in the process of reissuing the hard to find (and even harder to pay for) jazz obscurity, Milt Ward and Virgo Spectrum. You can find out more by keeping tabs on Frederiksberg's Bandcamp page, https://frederiksbergrecords.bandcamp.com   I'm told there is a bootleg out there so be careful. Frederiksberg is doing this project with the participation of the family of Milt Ward, which is to be applauded. Hopefully, this will give more access to a great jazz record at a reasonable price. The Roots album reissue from Frederiksberg (which is sold out on vinyl on the Frederiksberg Records bandcamp site) still appears to be available through some online retailers as a pre-order, so that's another one to jump on now if you can find it-- the original is extremely pricey and … END_OF_DOCUMENT_TOKEN_TO_BE_REPLACED

Clem Snide- Forever Just Beyond With a name derived from a character in the same literary work as the band name so famously identified with the Walter Becker-Donald Fagen duo, Clem Snide has an extensive discography, typically cataloged as “alt country.” This latest release is the work of one of its founding members, Eef Barzelay, who was responsible for much of the songwriting and singing. According to his bio, Barzelay suffered some serious bumps in the road during the last decade, including a failing marriage and financial ruin. At the same time, he learned that Scott Avett was a fan and they found inspiration in each other, leading to this album- a collaboration of artistry where Avett and Barzelay share some writing credits and Avett produces. The result is a fresh, upbeat set of tunes that are appealing in their simplicity and refreshing in their sincerity. The band is first tier … END_OF_DOCUMENT_TOKEN_TO_BE_REPLACED

Muriel Grossmann- Reverence Muriel Grossmann continues her quest for musical ascension on Reverence, which was released on vinyl in early December, 2019 on the RR Gems label as a 2 LP set. The compositions are Grossmann’s, and the band is much the same as the group of seasoned musicians with whom she has worked for some time (and detailed in the review of her Golden Rule), but for one notable exception: the addition of a keyboard player who brings that rich, woody Hammond B-3 sound to a series of compositions devoted to Africa. In some ways, Ms. Grossmann’s exploration of the roots of jazz deliberately eschews any superficial attempt to make African music. Instead, she draws inspiration from its influences, which are wide ranging and deep—you can hear rhythm and blues sounds mixed with more traditional African instrumentation and polyrhythms and come away with something that is both … END_OF_DOCUMENT_TOKEN_TO_BE_REPLACED